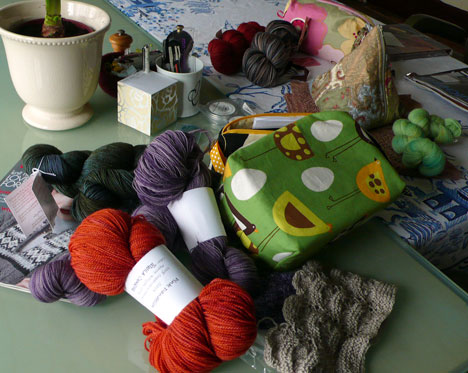 i may be old-fashioned, but it still confounds me that i can leave home on friday for a city that is a couple of thousand miles away, teach two days of classes, visit with family and friends, dip into the local culture a bit, then be home at at my desk by
9 am on monday as usual, not even feeling particularly tired—almost as if it never happened. we do live in amazing times.

i’m reminded of how much things have changed because i had a chance to visit with family while in denver—cousins i had not seen in years (you might recognize the famous hanson hair color on my cousin karen, heh). 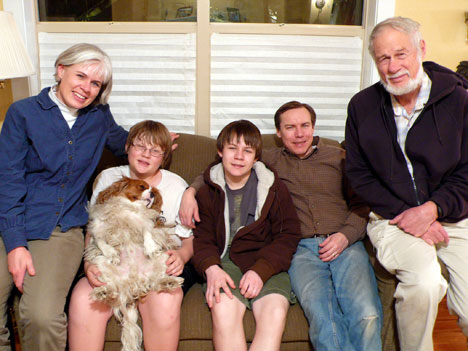 we reminisced about how, as kids, they would travel east to new york by car every couple of summers; we felt then as if we lived in completely different worlds, so far apart and exotic. and now we are separated by a mere 2.5-hour plane ride (but we’ve seen each other less often lately).

we had a great visit, catching up over dinner (john’s delicious grilled salmon, the best i’ve ever eaten), hearing about their life in denver and my uncle’s renewed travels to far off places. i felt so warmed by the way they opened their home and life to me; it was an especially memorable addition to what would otherwise be mostly a working weekend.

it’s good that we now have the ability to be more connected and to see each other once in a while without planning a three-week trip.

chipotle, the dog, can’t even fathom the prospect of such a thing.

i left home very early friday morning and was one of the few passengers with a light on in the dark cabin (i made headway on more secret knitting) as we traveled all the way west in the dark. then, just when we were circling to descend over the denver airport, the plane banked around to reveal

the beginning of the dawn symphony.

the low-hanging clouds made a beautiful backdrop for it 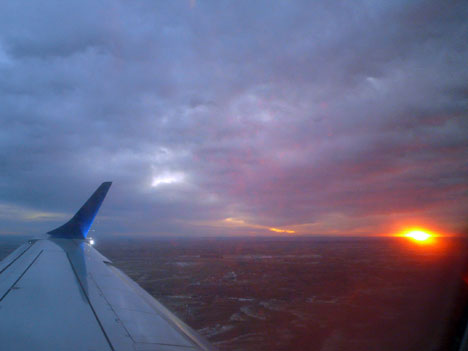 and in just a few minutes the day arrived 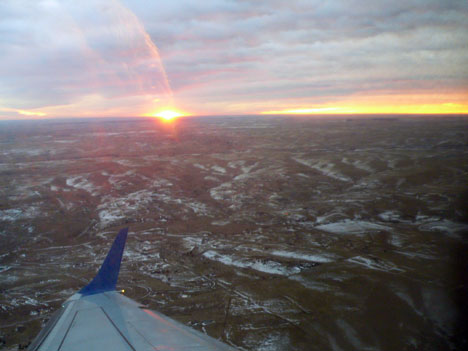 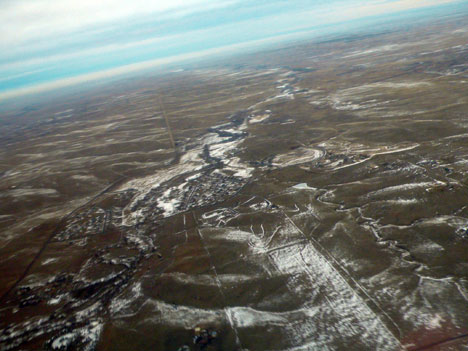 before diving toward the runway and ground fog so thick, you couldn’t see anything else.

i was met at the airport by judy, who organizes the fiber experiences programs, which include easy-going retreats, events, and weekend workshop events for fiber lovers throughout the year.

by then i had been up for about seven hours and was feeling hungry, so we headed for breakfast and got acquainted. judy is dear and lovable and has the best sense of humor, along with a sense of calm that makes everyone feel comfortable (all the best qualities and organizer an have, i think).

since it was too early to check in at the hotel, we went to judy’s place to hang out and knit for the day, which i loved. i was so comfortable there that i forgot to take photos of her “knitting spot”, which was so charmingly homey.

i made a high peaks hat—yes, a complete hat— while we talked and worked. with no email or other outside distractions, it’s amazing what you can do in a few hours (i even wove in the ends, heh) 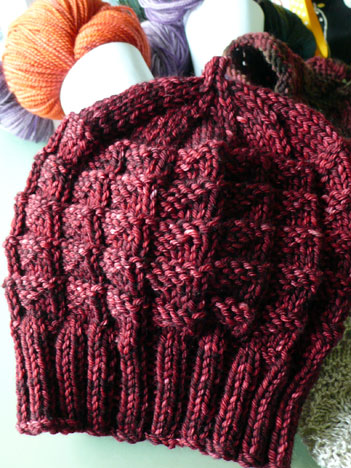 i’m still trying to decide if it will fit its intended recipient—it fits me, but i do have the tiniest head. i may knit another, one size larger, just to be sure. i used a delicious skein of sundara worsted merino, colorway crushed cherries. the yarn was divine to knit with and i think i might have enough left to knit that second hat without cannibalizing the first (i hope so, because that means i can keep the first one).

in the afternoon i got checked into the hotel and went to the workshop space at TACtile arts, right next door.

we set up tables and chairs for the participants and i unpacked the trunk show and figured out a way to display everything i brought. 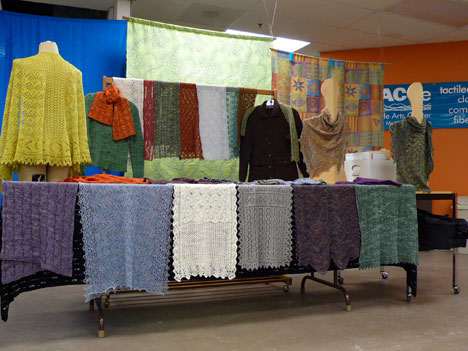 i was really lucky that this venue is devoted to promoting textile arts—pat, who works there, unearthed all sorts of mannequins and props to make the display more attractive (one of the best i’ve been able to put up).

marilyn, who owns black water abbey yarns, joined us to help out and to create a display of her unique, irish wool yarn and samples in it knit from my patterns—she had ondule, trevi, gnarled oakwoods, the zigzag set, gust, and several others sampled in naturals 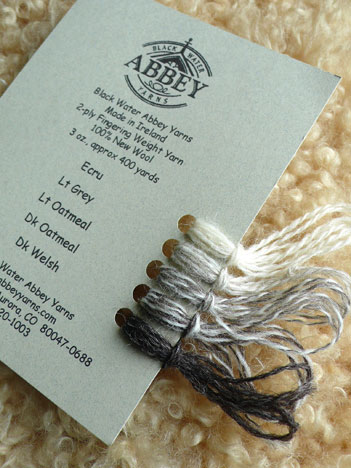 and beautiful heather colorways, fiber dyed and spun for her at a small, family-owned mill in ireland. 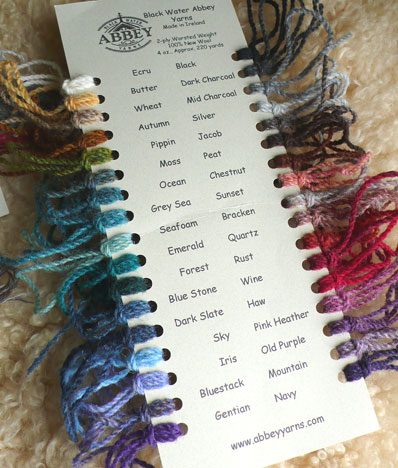 it was awesome to see them in this interesting yarn, which knits up similarly to a shetland yarn—a bit scratchy in the skein, but with a beautiful sheen. it softens up when washed and over time, develops the patina and hand of the best kind of sweater—one that you will own for life, which will wear like iron.

sadly, i have no photos of her booth (bad blogger)—a recurring theme for part of the weekend. but i do have this nice picture of judy and marilyn, sitting at the back of the room during class, keeping an eye on everything and enjoying a visit. 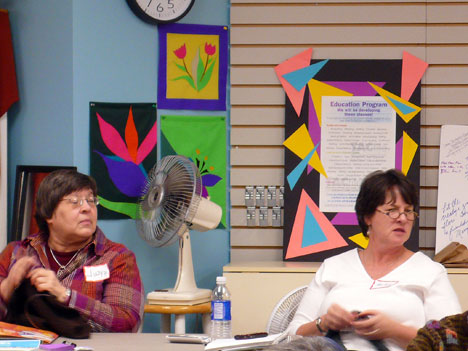 (they are both so terrific)

once we finished up at the space we headed for an early dinner at the fresh fish company. this was definitely a good move—this hopping restaurant had the feel of the kind of “swank seafood joint” that couples used to head for at caesar’s bay on a weekend night—kinda 70s, kinda lounge-y with low lighting and lots live fish tanks, but very very good eating—much to recommend there.

by the end of dinner, i could hardly keep my head up—between the early alarm, too little sleep the night before, and the altitude change, i was barely coherent. you won’t believe this, but i was in bed by 7:30 or so and slept pretty much nonstop til 5 am the next day. i can’t even remember the last time i did that, but it felt fantastic.

throughout the beginning lace workshop on saturday, i took nary a picture; i was so busy talking and working around the room that i just forgot about the camera (sorry).

sunday, however, was a different story—i remembered to put the camera on the table where it would remind me of it’s uses. 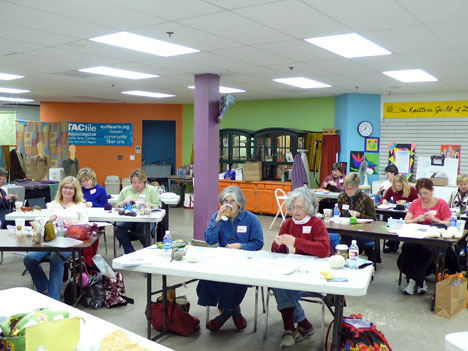 this was a hardworking group—we tackled a triangle shawl sampler that was challenging for many of the participants, but they worked hard and had lots to show for it at the end (it’s not easy making lace, after all). some of the beginners from the previous day took the advanced class as well, which impressed me a lot—i think it’s really courageous to try new challenges in a group of other knitters, some of them very experienced.

mid afternoon, we changed things up with a little blocking demo 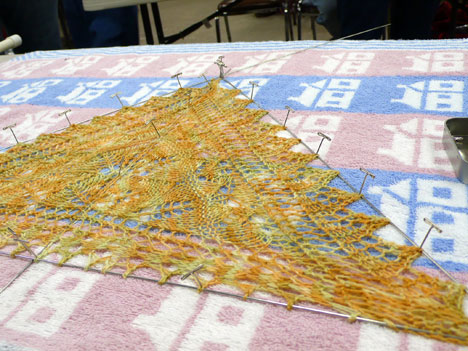 i showed everyone how i thread blocking wires and how to use a ruler to stretch and pin out a shawl. BTW, judy introduced us to a supplier of blocking wires who offers a very attractively-sized set (at a very reasonable price) in her etsy shop, which includes a PVC case.

i always include some quiet work time in between “lecture” periods in my classes so that students can practice the skills we talk about while i’m there. if i’m not answering a question during this time, i’ll work on a little project.

early saturday morning, i cast on a neckwarmer while having coffee in my room, using my little ball of handspun fibre isle blend. between class on saturday and the pane ride home last night i finished it up 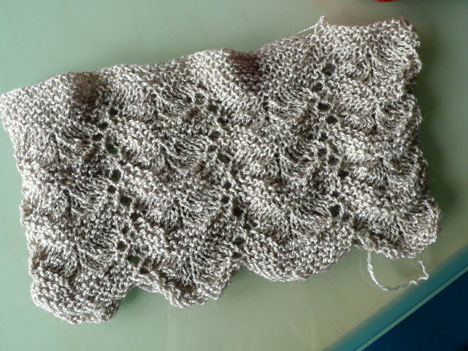 however—i don’t care for it. it just isn’t as great as i thought it would be in my head (plus, it’s too big for me), and i want something really special from this yarn. so i’ll rip it out today and find something else to do with it.

on sunday morning, i cast on another neckwarmer to go with the red hat i knit on saturday. i worked on it through sunday’s classes (and again on the plane last night) and i would have bound it off, but i didn’t want to try it on during landing time, haha. 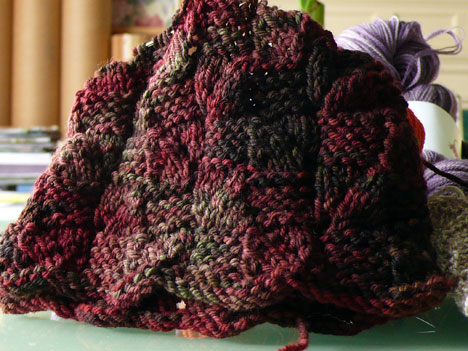 this one worked out much better—it’s exactly what i wanted it to be; fairly dense and warm, with textural interest that moves the colors in the yarn around nicely. i love it.
i still haven’t tried it on to see if it’s done, but i will after i finish this post.

so that makes two neckwarmers and a hat off the needles over the weekend, plus a heap of secret knitting—not bad for a working weekend. it’s incredible what i can accomplish when i’m not accessing email . . .

sunday’s group was as much fun as saturday’s and the day passed quickly. before i knew it we were packed up again and heading for the airport. i brought home a few lovely yarns from participants to show you, but i need to sort out that jumble of stuff in the top photo and take pictures—you’ll get to see it tomorrow or wednesday.

when i arrived back that house, i dropped my bags and settled in with david to talk and watch TV while i worked on some socks and tried to feel ready to sleep.

this morning when i got into the office to turn on the computer again, i saw this 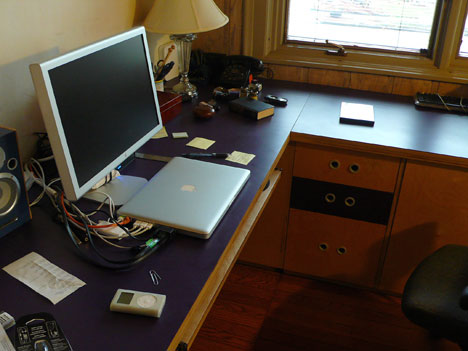 where david’s “desk area” used to be. and this 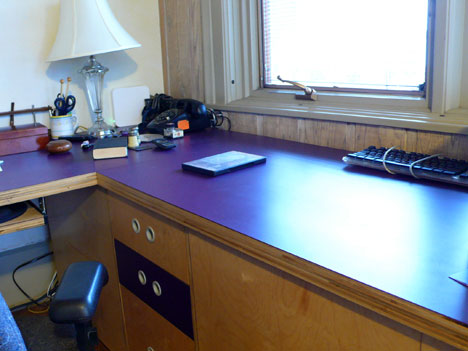 where his “storage” area used to be—someone has been cleaning my house!

this sight made me unreasonably happy—not that i’m in any way a perfectionist about the house being clean or anything, but that area of the room was, ahem, getting a little cluttery; the kind that’s bad enough to make me nervous if i look at it for long.

i’m sure the new laptop had something to do with the urge to straighten up, but i don’t care—i’m glad it looks nice again.

ok, wow, it’s already time for my monday afternoon class to arrive. i’ll be back!