i’m signed up for races on every saturday in june and some fridays as well
(i couldn’t help myself—we have these “night glo” races here that are irresistible and in keeping with mister knitspot’s schedule, i might add). many of these events are ones i am unfamiliar with—i like to surprise myself by finding out all about it when i when i get there.

yes, sometimes this can backfire on me, haha. but not this past saturday.

before i picked up my race number on friday evening, i had no idea what girls on the run encompassed; i just thought it was cool that there was something only for girls and that it especially supported the goals of youngsters who want to run or take on a new challenge. that is so up my alley, yay.

i love posters lining the tunnel that lead to the athletic field where the pre race crowd was gathered. add capes and tutus and you have my complete attention. 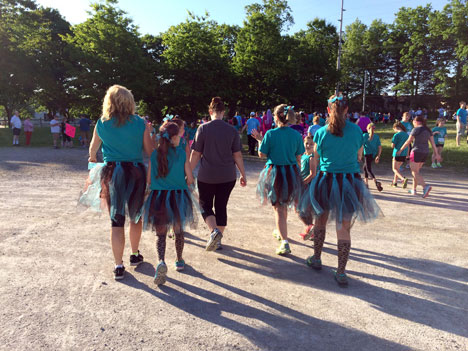 but wow, this is so much more than than fun costumes and streaked hair, and you can tell by how many, MANY non-running supporters were there, both at the pre-race expo and at the event itself (i mean, if you are getting out to cheer us runners at 7 am on saturday morning, you are a special person and my hero). 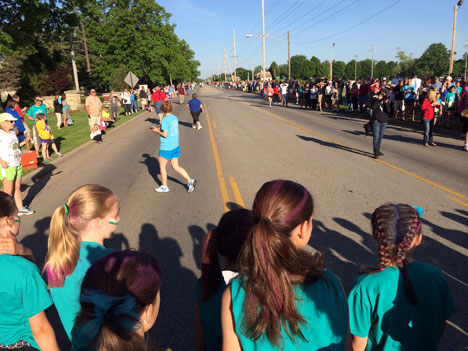 there they are, lining the route out of the starting gate and i can tell you for a fact, they were there over all three miles of the route.

the start gate was a mob scene; our small city managed to conjure up 1500 local race participants (a lot when you consider that the most popular 5k races in our area draw 300 to 600 runners of all genders).

the excitement was electric—girls and moms and grandmas and unattached women (like me) alike chatted amiably, compared notes, and wished each other luck while we waited for the start. there were running buddies and coaches and the happy, but clueless—like me.

then the “soleMale” was introduced 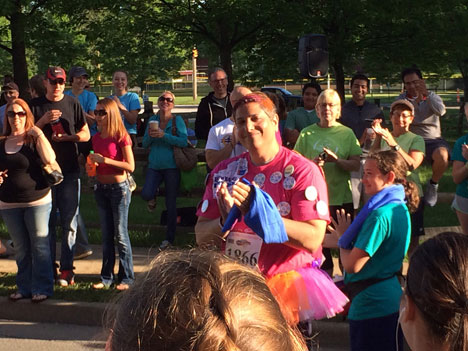 this year for the first time, one guy was chosen to run with the field in honor of the many other men and boys who faithfully support this cause.

when it was time, we all counted down together and the race was on.

i couldn’t take photos after that but you can tell from the earlier pictures that we ran in stellar, late spring weather conditions—cool and fresh with a warm sun rising.

it was a big field for me but i ran pretty well and just missed getting fourth in my age group by mere seconds. pout. it was my own fault, too; i started too fast, a chronic issue for me in short races. i’m trying to learn to do better. 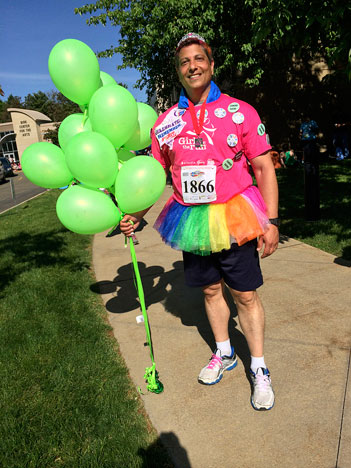 afterward, we all gathered back at the race expo for snacks and a cool down. i ran into our accountant, pam and had a great conversation with her, through which i found out about another awesome organization in our city that supports kids. we decided to work together on a couple of things in the near future, including sponsorship for their upcoming events, one of which is another race in july that i’m signed up to run. small  world, right?

after the race i got back on my bike and rode to my saturday yoga class, which was the perfect followup. then it was home to a quick lunch, a short nap, and some garden work. 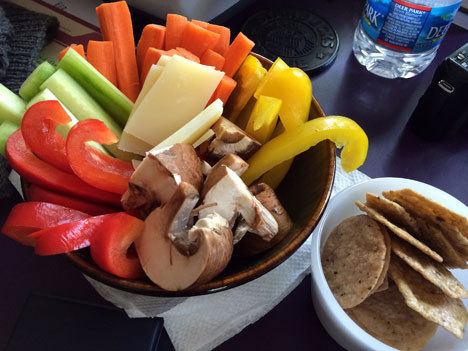 i got the herb plants in the ground and put in several rows of potatoes before it got dark. david was working on getting some of the weedy areas around the perimeter cleaned up. he also erected the trellises for the tomatoes, which i’ll photograph and show you next time (it’s too dark now). after dinner, i sat down with a diagram of the garden and my notes about companion planting to plot out where all the seeds would go.

looks like everything can be in a happy spot with friends close by. phew.

today i got up early to run before going to an all-day yoga workshop, which was incredibly good, but exhausting; i could not believe how wiped out i was at the end of the day! i came home and collapsed into bed for something like four hours, can you believe that? but it was delicious too, sigh—i rarely get to indulge like that. needless to say, i missed my window of opportunity for getting back out to the garden, so i will have to do that after class tomorrow night.

i also completely missed out on taking knitting photos, but i promise there will be more next time; i’ve been doing lots of knitting and designing.

the next thing you’ll see though, is the announcement of our awesome rhinebeck after party signups—woo-hoo! erica will be here monday or tuesday to tell you all about the classes we are offering and how to reserve your place. david is busy working on how to make signups easier by putting a listing in our online store, so it can be accomplished with a series of clicks intend of through email.

slowly, slowly we are getting better at this . . .