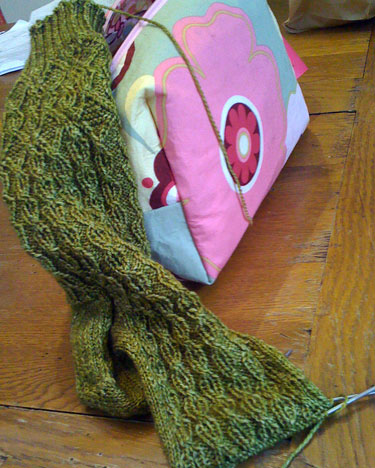 on monday we left maryland under overcast skies and headed for new york state to spend a couple of days visiting with friends. we had a wonderfully relaxing evening and overnight with them and i got lots of knitting done on my french quarter socks while we visited. i think that was the longest stretch of continuous knitting time i’d had in quite some time and it felt great.

tuesday morning a gentle snow began falling soon after we were up and about, which seemed innocent enough as we sipped coffee and knit some more. once the car was packed and we headed of to our next destination, all of that changed almost at once—the snow became a storm almost before our eyes.

it was a little slippery, yes, but our minds were on our next stop; a greatly-anticipated lunch date at CIA, yay. 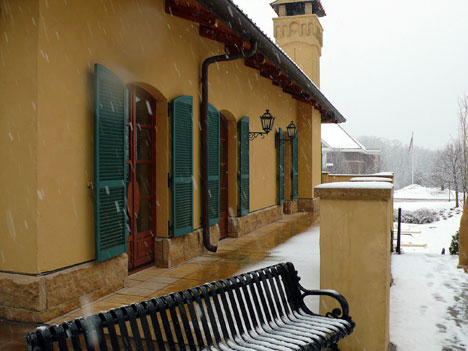 you might remember that that this is a favorite stop for us during our rhinebeck trip each october and i was excited to be bringing david as my dining companion his time.

david and i joined nathalie and john fischer for a really fun afternoon of sampling food in the american bounty restaurant. 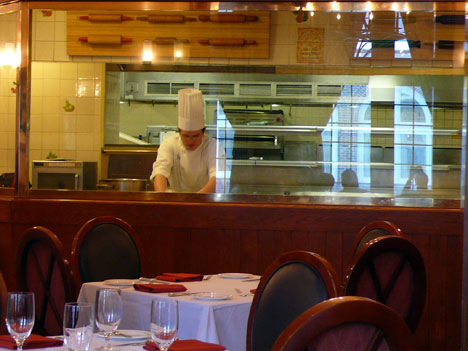 where we dove in to a beautiful three-course lunch of appetizers, fish entrees, and luscious desserts (sorry you weren’t there, kim!) 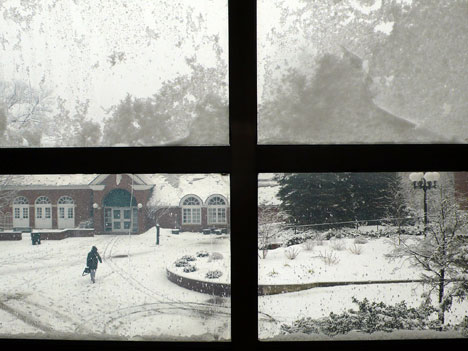 outside, the snow continued to fall and get heavier as the afternoon progressed, but we didn’t care, except to admire its prettiness. we had the restaurant almost entirely to ourselves, which made the day feel even more special. 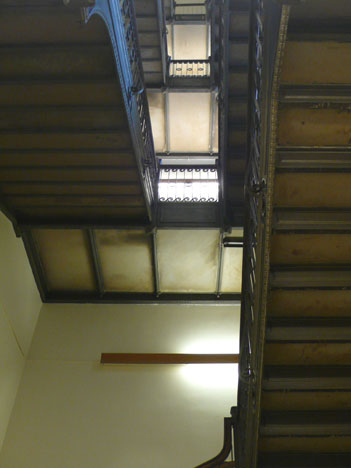 afterward, they treated us to an “insider” tour of the school—looking into the kitchens, storerooms, and classrooms down in “the bowels” of the building. 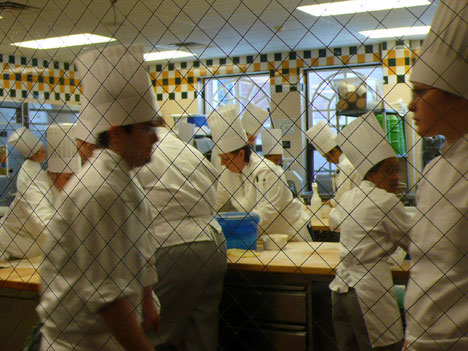 chefs in training are scurrying back and forth in one classroom after another. in the store rooms, massive quantities of this and that are carted from the loading dock to their temporary homes on the shelves—the quantity of ingredients is truly impressive 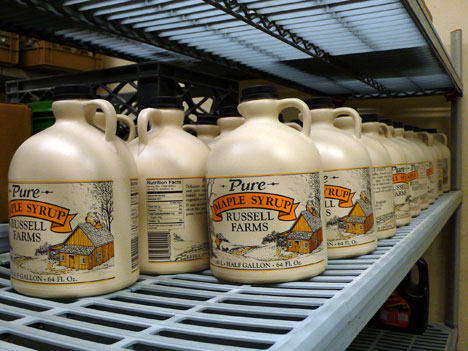 but not surprising when i think about it—the kitchens at the school turn out dishes at a constant pace throughout each day and into the evening, to supply their many restaurants and classes 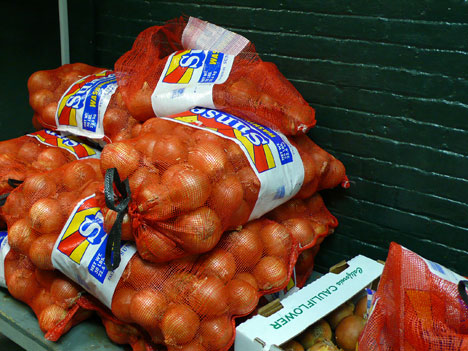 see these onions?
below, in one of the classrooms, students were busy at work, mincing them for a timed exercise (sorta like that scene in the julia child movie) 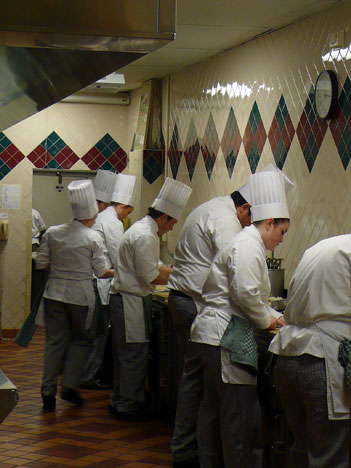 we even got invited into a pastry class to watch the chef put the final touches on a beautiful cake—a flower, some fruit and a marzipan basket to hold them. when he was done, he turned to me and asked if i would like to take it home! since my mom has a birthday this weekend, i accepted this unexpected gift for her. 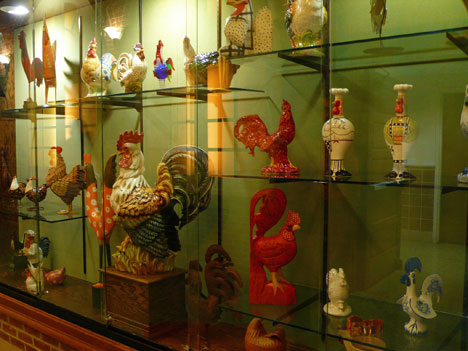 back upstairs, we walked through some of the “dressier” parts of the school—the first stop was the main dining hall, which used to be the chapel in the old seminary 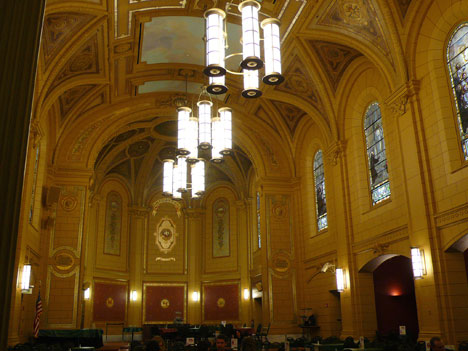 we took our leave of john, who had to get back to work, and followed nathalie through a few winding hallways and out into the weather for the first time in hours 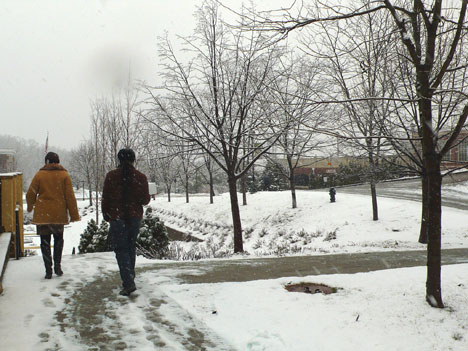 the world outside was transformed—snow was piling up everywhere and that hushed quiet that comes along with it had descended. everything was so pretty!

we headed next to the library building, which is the home of nathalie’s office—she is the director of the school’s publications division and she has lots and lots of pretty cool books. 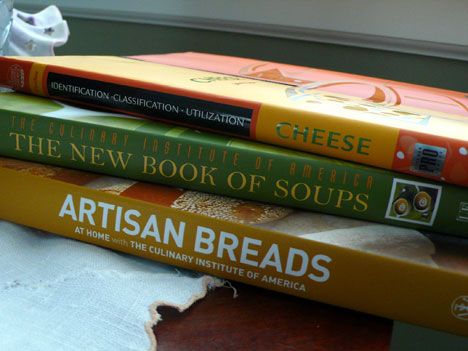 she sent me home with a few that are right up my alley—bread, soup, and cheese (i could live on just those foods . . .).
see that top book? take a closer look at the author

this is john’s new book cheese—part of the school’s pro kitchen series. he told me about it back in october and now i have my very own copy. 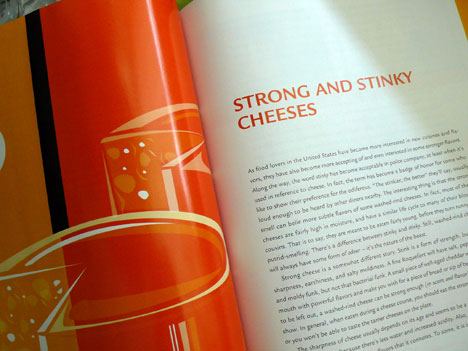 cheese is my favorite food (well, ok, maybe i have a few favorites) an this book is the kind of guide that i love to have for learning more about specific foods. 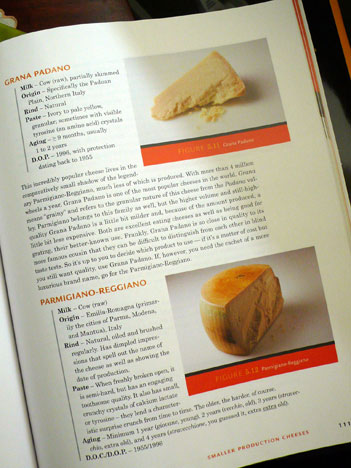 instead of organizing the contents alphabetically, as do the other cheese books i own, this one organizes the contents by type; when i look up a specific cheese, i can learn about similar ones at the same time (good when i need to substitute or want to explore further). 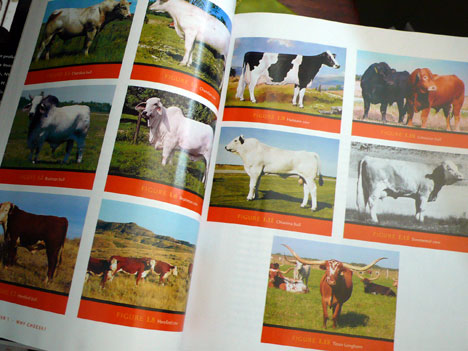 and who can resist a book with a full spread of cow photos?
i’m looking forward to reading more of it in depth. i’ll keep you updated on the books as i get to explore them more. that soup book couldn’t have come my way at a better time—i’ve been wishing all winter long for new, interesting soup recipes.

after visiting the publishing department, we realized that we had to get serious about getting back on the road—the weather outside was looking nastier by the minute and we had to drive north to albany yet.

it was smart of us to get going while it was still somewhat light—the roads were slippery and the driving was slow, at least on the east side of the river. we fell into line with a bunch of other intrepid travelers and made our way slowly upstate.

our delay could have been worse—it took about an hour longer than usual, but we still arrived in albany ahead of the biggest part of the snow dump—by morning it would be much, much worse, with widespread school closings and power outages.

once we were there, we settled in to watch the olympics and enjoy some knitting time by the fire. i finished my french quarter sock (my third olympic sock to be completed). 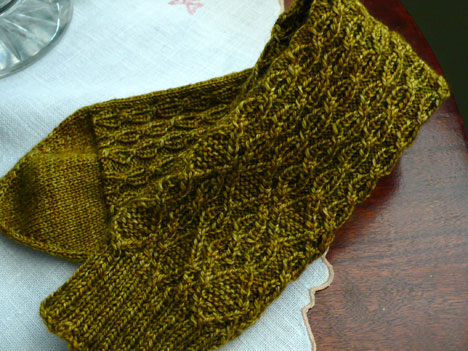 i love the way it feels on my foot, too—cozy-warm and yet, sleek and sturdy enough to wear with shoes. the twist-stitch pattern is delicate, but has strong stitch definition to show of the sheen of the yarn (woolen rabbit kashmir).

kim will be offering kits with sock pattern and yarn from her booth at the SPA event this weekend in freeport, maine. next week, when her online shop reopens, you can find the kits there. the pattern will be available as a standalone item in my own pattern shop as well, beginning monday, march 1. 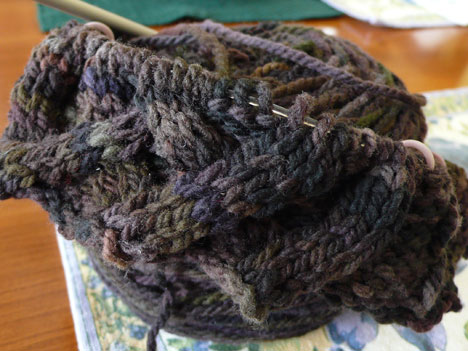 once i had the sock finished, i finally got to work on david’s cabled hat, yay. i’m having a wonderful time knitting with big yarn on big needles for a quick change of pace (and david is really happy to finally be getting the long-awaited hat). i’ve already changed my mind about the cable and spent some time today doing surgery on it, but i’ll tell you more about that next time.

now that we are settled in one place for a few days, we also had a chance to take some nice photos of the longjohn socks, which means i can finally release that pattern tomorrow . . . just in time for more snow, heh.

well, i think i’ll join my mom and david now to watch some olympic action—can you believe that last night was the first time i actually got to watch any of the games?
i gotta catch up and being snowed in seems like the perfect opportunity.

23 thoughts on “cooking up a storm”