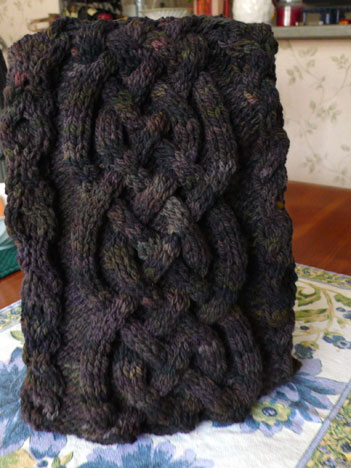 because it’s been such a busy trip, my olympic goal—to finish five socks and knit a hat for david—has not really been at the forefront of my thoughts this week. despite my lack of focus on it, bit by bit, my knitting has progressed and if david drives most of the way home (so i can knit), i might actually finish. 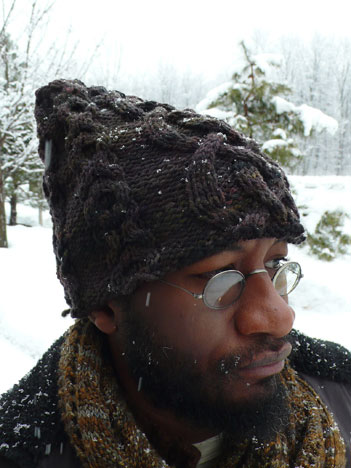 and with a hat like this, who wouldn’t want to support a knitter’s dream of getting gold?? this was knit with a special skein from chris at briar rose, dyed on super-squishy mountain meadows merino worsted. i don’t think she has it listed in her online shop, but it may be something you’d see in her booth at one of the shows or possibly on chris’s page of selections from the dark side. it’s just yummy—so soft and squeezable, yet sturdy.

haha, i really love the rustic-ness of this hat—it’s perfect for david; he looks like a man of the forest in it. and he seems to like it a lot; he’s worn it nonstop since i finished it (he really needed a hat). we’ve even got plans for at least one more; maybe one that he can tuck his braid into. i knit until my yarn ran out, so the length wasn’t completely optional, but a longer one might be fun (and good for wearing in heavy snow).

once i got going on it, it knit up very quickly on 6mm needles, but my beginning was, as usual, fraught with indecision and false starts. i had to cast and reknit the first few rows on a couple of times. 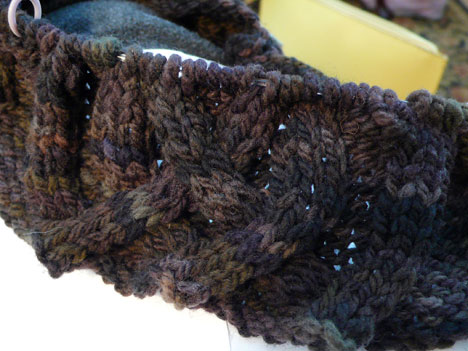 then, halfway through the first repeat of the cable, i decided that i wanted the cable to cross differently, in a way that looked more “interwtwined”. i did NOT, however, want to rip back what i’d done (sixteen rows—big deal, right?) 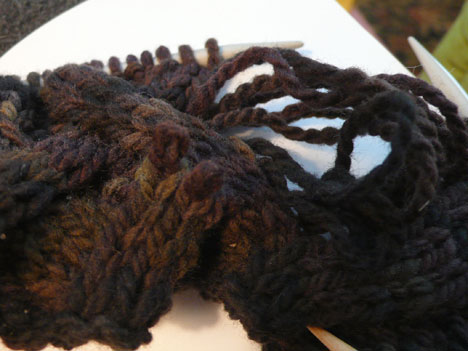 so i commenced to doing some surgery. i dropped down a cable rib on the right side and re-crossed it the other way (under, instead of over), then worked those stitches back up 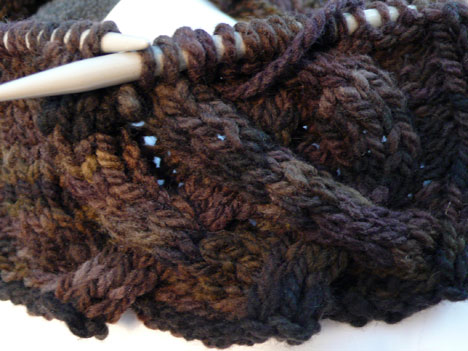 then the one on the other side needed to be recrossed to match it, so i took that one out too and changed it.

finally, the center one got changed as well (why not; as long as we’re change-happy, we might as well reconfigure the whole thing, right?). 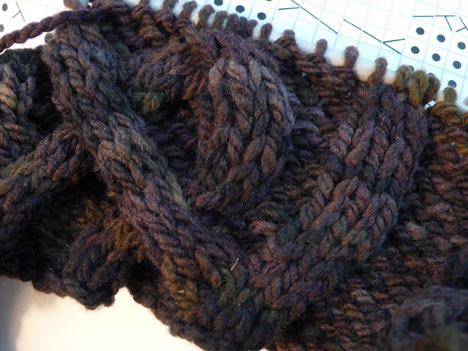 i dropped the three knit sts of that rib down and recrossed so it went under at the center instead of over. 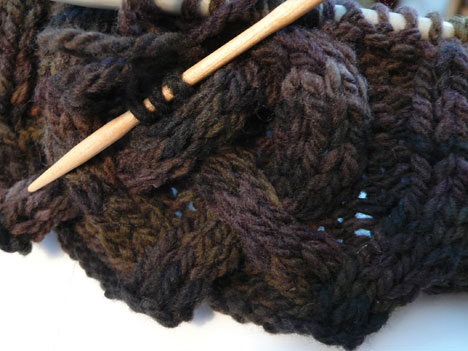 when i was all done, it looked like this 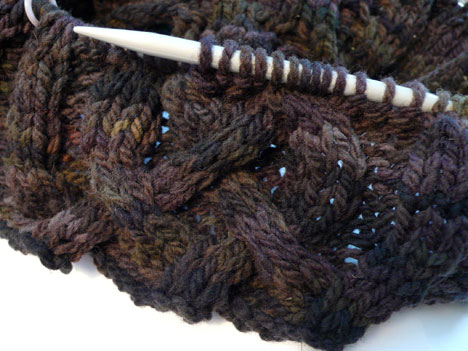 then i had to repeat the sequence for the big cable on the opposite side of the hat.

the whole process took about half an hour—probably almost the same as it would have taken to rip and reknit, but sooo much more interesting, heh. maybe i just wanted to see if i could do it successfully. sorta like adding a triple axel to my program, for a few extra points from the judges.

so far, i’ve finished the hat and three out of five socks. sock four is almost ready for toe shaping and sock five is completed to about halfway down the foot.
i could do it. 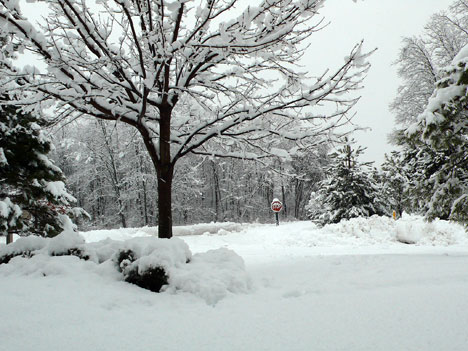 omg, it is STILL snowing outside—it’s been snowing all week, ever since we left hyde park on tuesday. there’s a big storm circling around and around out there and i guess it’s going to remain in place for a few more days yet. we are headed back to ohio today, too—i hope the drive home isn’t too painful, ugh.

the weekend was great—i taught classes here in albany at trumpet hill on friday evening and saturday. we had a fantastic turnout, despite the weather—i am so impressed with the intrepid upstate knitters—everyone who was supposed to come arrived with bells on and we had lots of fun. 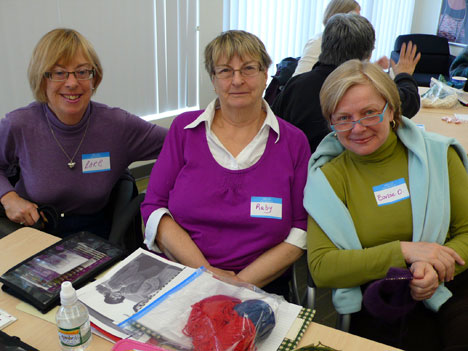 barb, ruby, and barbie o. (otherwise known as the gang from montreal) drove four hours from canada for the full the weekend of classes. impressive, right??
i think they had a pretty fun friend’s weekend; i hope their drive home today is free of complications.

i was a little nervous friday night (it’s always like that when i first start a class), and i completely forgot to take pictures during the lace knitting class (sorry!).

saturday though, i managed a few before we got going for the day with our sweater fitness class. 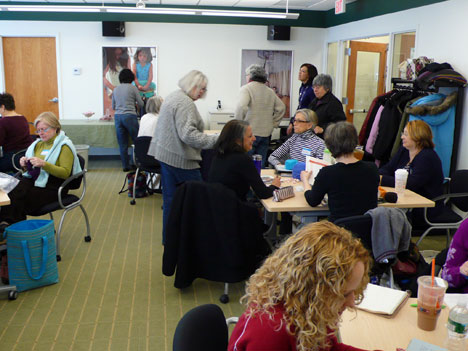 we had the use of this incredible, state-of-the-art classroom room provided by berkshire bank—they make it available to groups as part of their “give-back” to their community. that’s one thing i love about where i grew up—businesses in the capitol region provide a considerable amount of community support and it makes a big difference. 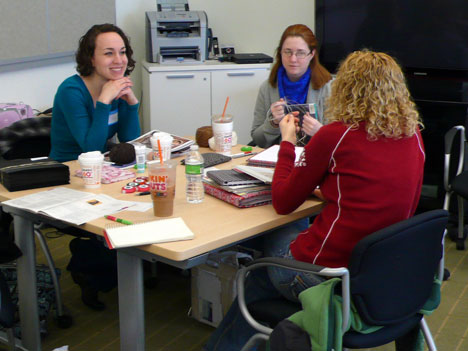 that’s jen in the middle above; she came all the way from cape cod to join us! her family owns sage yarn in falmouth, MA

we had almost thirty people participate in this session and boy, did we ever dive in to fitting—these knitters were ready for it. a truly awesome day; i think most everyone went home very excited.

i had a wonderful time too—it was SO good to be teaching in my home town and i really appreciate that robena at trumpet hill provided this wonderful opportunity. 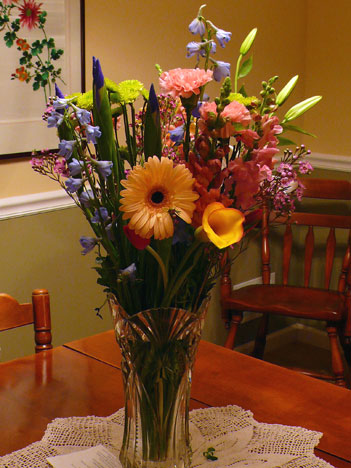 last night we celebrated my mom’s birthday by having dinner at the standard restaurant with my sister’s family and my aunt. afterward, we cut that cake i was telling you about

and finally got a chance to see what was inside 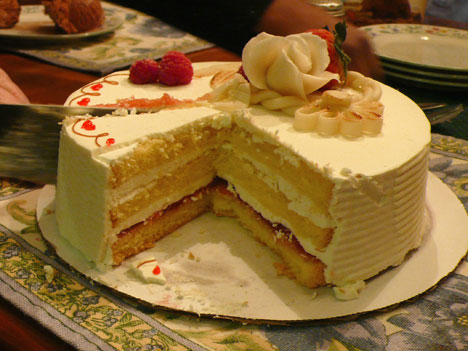 whipped cream and strawberry preserves, mmm.
i gave my mom the dark red hat and neckwarmer set i knitted last month; she loves the color of the hat (but declined to model it for the blog, haha).

it’s funny how everyone runs when i pull out my camera now . . .

well, i need to go—i have to pack up my stuff so we can get going this morning. have a great sunday and i’ll see you back in ohio.

22 thoughts on “i might get a medal after all”