to continue on the theme of finished knits, my friend susie brought her completed capricorn triangle to our monday knitting class. this shawl, knit in our cuddly chebris lace yarn, was the april feature of our 2014 bare naked knitspot club and members of my monday class have been working through it together over the summer.

janet finished hers a while back and i’m blanking on where debby is with hers, but susie is now the proud owner of a finished AND blocked copy of her own. and as you can see, she’s pretty chuffed about it, haha; what’s not to love about this photo? 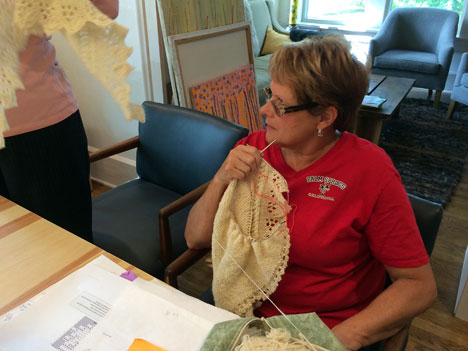 debbie s. will be the next finisher—she’s been plugging away on the first half of her edging and was victorious in getting to the halfway mark at last monday’s class. seeing susie’s finished gave her a little something to look forward to (pattern is exclusive to club members until april 2015, but eBook memberships are available here; KAL for the project can be joined in our BNK rav group). 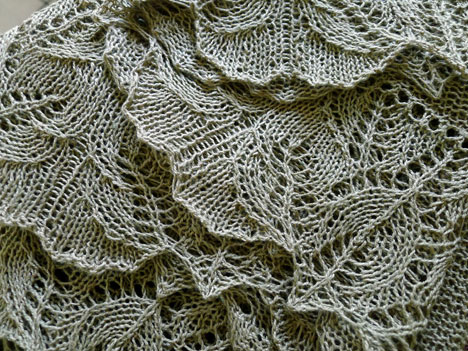 just that morning i had blocked a couple of things myself—one of them was my completed empreinte crescent shawl, knit in the beautiful forest mist shade of organic color grown cotton. 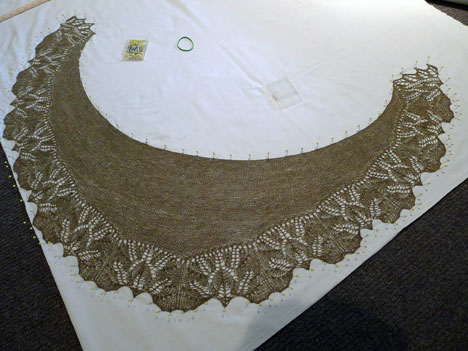 i am totally in love with this piece all over again—it is so different, yet equally fetching in light, refreshing cotton lace. and wow, so great to finally see it off the needles, huh?

i think this hem lace is one of the most stunning patterns i’ve ever had the privilege to knit—it just knocks your socks off, doesn’t it? it’s really pretty in the rectangular version too, where more pattern results in a piece with lots of wow factor.

and the edging, short though it be, adds that little extra-exquisite touch—again, its impact is amplified in the rectangular piece where it runs along the full length of the piece.

once it was unpinned, i got to play with it on the dress form

i had to fan myself a little bit when i stepped back to see it. 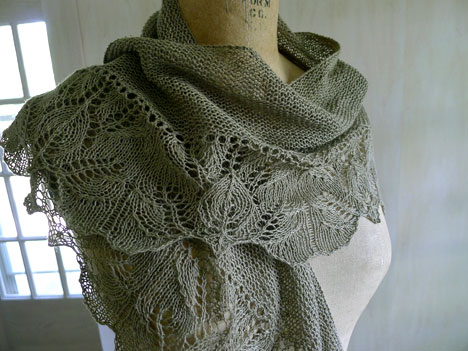 the drape of this fabric is so alluring and it does so effortlessly; you don’t have to fuss to make it look incredible. 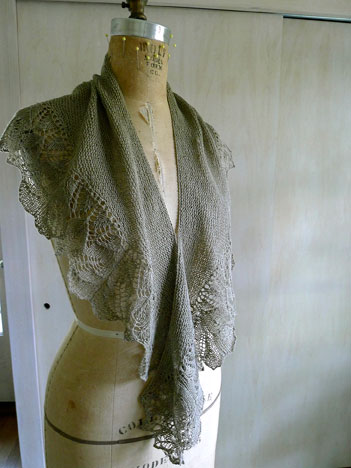 just toss it on and fluff—talk about power dressing, haha.

i knit the smallest size of the pattern, using needles one size smaller than it called for (3.25 mm and 2.75 mm). i used less than one ball of the ecobutterfly cotton lace—about 450 yards/1.3 ounces; your mileage may vary. the piece blocked out to about the same as it did in the wool yarn on slightly larger needles; plenty large enough for a good sized scarf on me.

i am completely thrilled with the outcome! 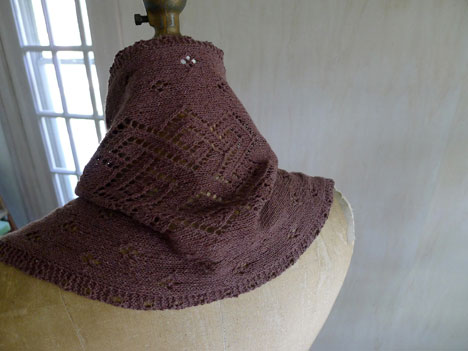 on the same day i also blocked a sample scarf that karolyn knit for us, using the unusual purple fifo cotton lace that was shipped with the july installment of the passion club. an openwork celtic knot is placed at the back of the neck. 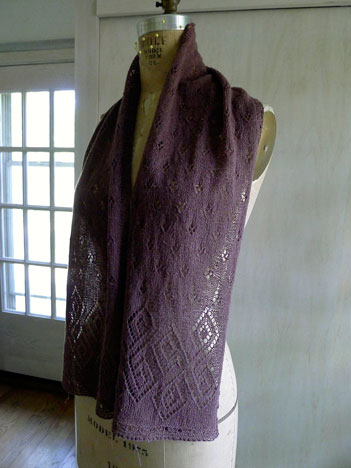 this yarn knits into a completely different fabric from the green and brown color grown cottons. with a fiber texture more like linen, the fabric is sturdy like denim and has the same propensity to be a bit stiff at first, softening with time and handling. the design is the rectangle version of the club project, knit into a fabric pattern inspired by bandana prints. this pattern will be released when the club pattern comes up for general release in november.

i knit a bocce hat from the fifo cotton in sport weight, which i also blocked and washed the other day, but forgot to photograph. i’ll do that when i get home; i’d like talk a little more about how the fabric opens up and changes with washing.

well, that was monday—we were to travel on wednesday and i wanted to use up the various vegetables we had in the fridge before we left. 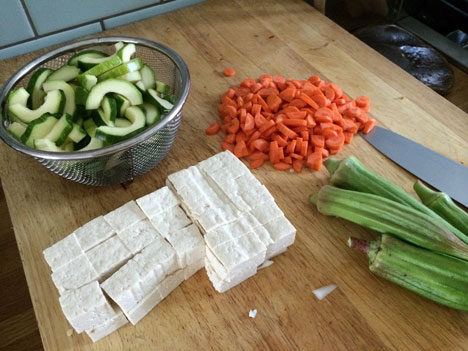 so once everyone went home, i got to work in the kitchen on a curry. i think just about everything in it was from the garden except the tofu. 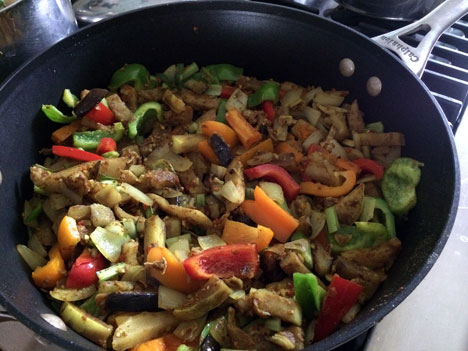 yum-yum; summer eating is so good! and the best part is that there was plenty to put in the freezer so when we get home, we can just thaw and heat for dinner.

first thing the next morning we hit the road for albany. as usual i drove the first half and david took the last half, which meant i was free to knit til we got there.

i brought a few different projects along, but the one i worked on in the car was my third bocce cap in our kent DK yarn—i’m trying to get a few samples knit in different fibers so we can have a variety for the photo shoot.

i finished the brim and did my increase round, then changed needles for the body. i always enjoy passing that milestone; even though the size grows a bunch all in one shot, my hands love changing to larger needles and a looser gauge.

with the ease of a more flexible fabric, the body pattern just flies along—lots of stockinette and a pattern that begs for more rows to be added. by the time we got to albany and settled in, i was well into the hat body.

i worked on a different project that evening, but the next day, i knit on it while i checked email and ravelry and later when we went to the movies, i put on a few more rounds. 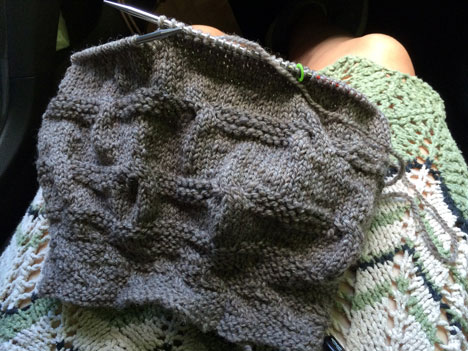 and on today’s trip to massachusetts, i got a bunch more done—i’m almost ready now to start the top decreases.

today i finally did some running after almost a month of rehabbing my ankle from its mysterious injury. i’ve been biking a lot to keep in shape while it heals, but have been hesitant to run or even walk on it, since the last time i tried, i had a backslide with it. i figured this would be a good time, while i was away and getting more sleep and some relaxation.

so yesterday i went for a good four mile walk and today i did a mix of walking and running, finishing with two miles of running. the roads near my mom’s place offer some nice shady woods as well as neighborhoods—there are even trails leading into the pine bush nature area to explore. often those are way too muddy to navigate when i’m visiting, but today they were good and dry. it felt great to be out there again; i’m hoping i can keep it up. so far, it still pain free and i’ll try again tomorrow. unfortunately, i’m fairly certain that next weekend’s half marathon is out—a big disappointment since the race route takes us along all the streets i run nearly every day; i was really looking forward to it.

yesterday we went with my mom to the movies in the afternoon and then to a terrific photography exhibit in the evening at the albany institute of history and art. i really enjoyed that; if you live nearby, it is well worth checking out. 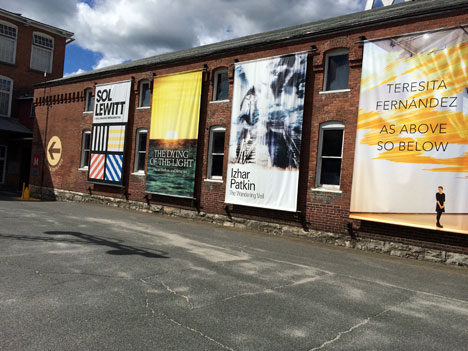 then today we were lucky to take a trip with my cousin to massMOCA museum of contemporary art. this was such a treat; one thing i really miss about living in NYC is the access to world class museums. i’m going to tell you all about that in the next post as this one is getting too long now, but i do want to show you one beautiful thing i saw today (among many others) 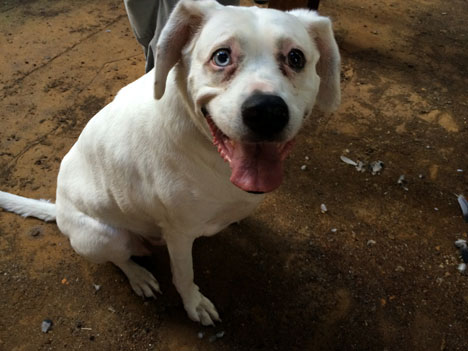 this adorable doggie named flannery, who stole my heart when she posed so readily for my camera. what a charmer! we had a wonderful day filled with art and my head was just about to explode with visual excitement by the time we left. 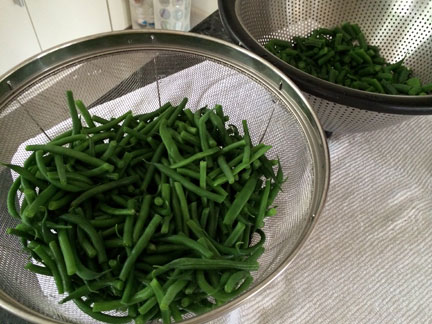 back at my mom’s place, we made a nice dinner of fish and vegetables, including—guess what?—green beans from our garden, which we all enjoyed.

now it’s time to join my mom and david in watching a movie (we sort of glut ourselves on AMC classics when we visit, haha). i’m working on a secret project this evening; let’s see if we can sneak up on it to spy . . . 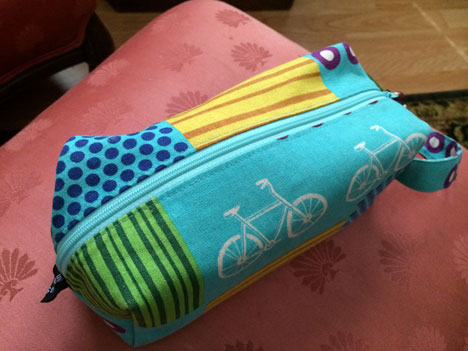 drat, not quick enough; it heard me coming and zipped itself up tight. a sure signal that it’s time to stop typing and go knit. see you soon.

4 thoughts on “we get around”