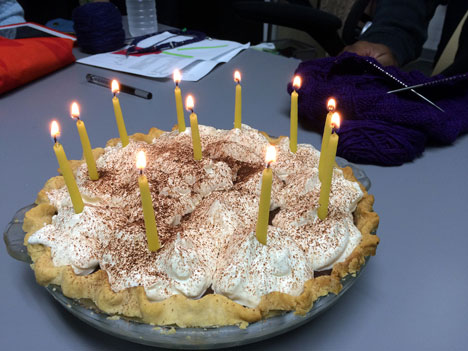 yes, good times indeed—david had a birthday last week and we were all so frantically busy getting ready to leave town that i didn’t get a chance to blog about it.

he had requested a chocolate cream pie and in the process of planning it, i got an idea about how to help myself with getting that troublesome gluten free pie crust into the pie plate in one piece . . . use TWO pie plates!

i thought i’d try it out here. i made the crust from my faithful, original recipe, subbing in gluten free flour and teaspoon of xanthan gum—even though it wasn’t devised to be gluten free i keep going back to this one because, out of all the ones i’ve tried, everyone seems to like it the best. 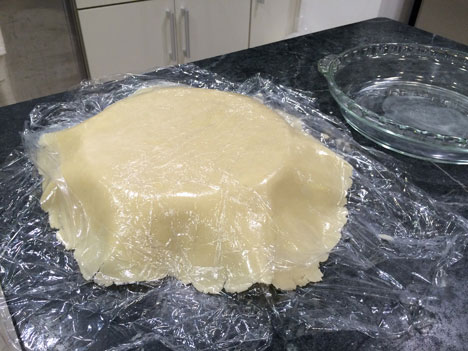 i rolled it out between two pieces of plastic wrap and laid over an upturned smaller pie plate. 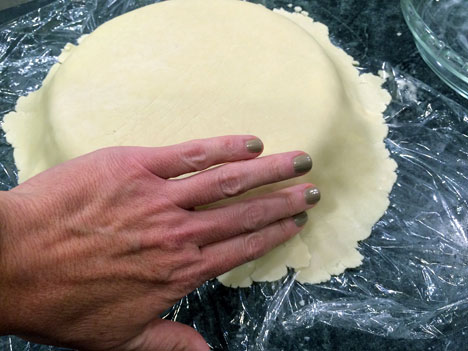 i removed the top layer of plastic and lightly molded the dough to the plate so it wouldn’t tear during the next step.

i placed the bigger pie plate over the dough and rolled the edges of the crust all around to get them in place for crimping later. then i secured them in with the under layer of plastic wrap so nothing would tear (gluten free pie crust tears really easily).

i flipped the whole shebang over, removed the smaller pie plate and the plastic wrap, and finished making the edges neat. 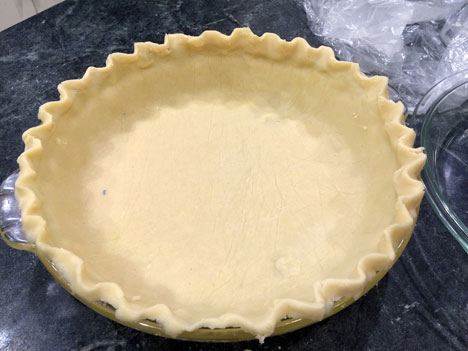 that worked a treat—it took just a few minutes and nothing tore or broke; i’m sold. i finished it off by crimping, put it in the freezer for a few minutes to set up, and then baked the shell to get it ready for the filling. 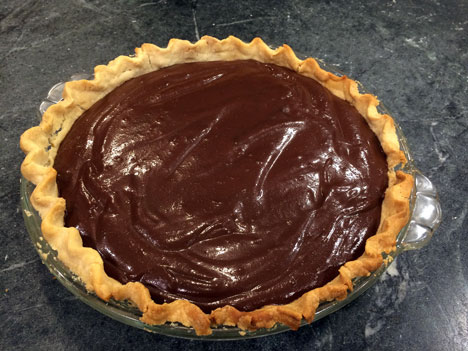 i cooked a dark chocolate custard filling that i used to make regularly for david and have not made for a long time; i forgot to take photos of that, sorry. 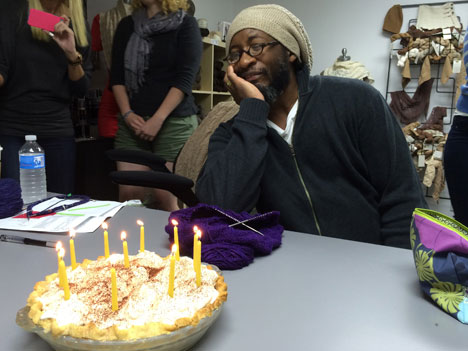 he was pretty happy with the results though . . . 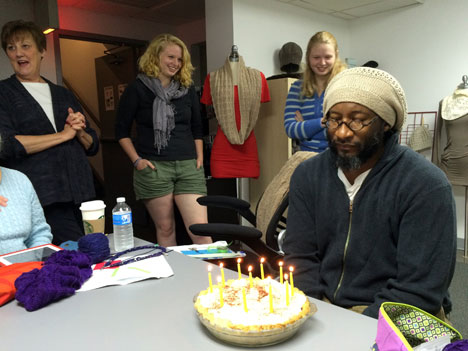 although possibly barb enjoyed it even more, haha. we cut and served the pie during last wednesday’s knit night (see? you should come!)

though we had miles to go that night before we’d be ready to head for michigan, it was a lovely way to celebrate together.

it was quite a frantic, nailbiter of a week, in fact. 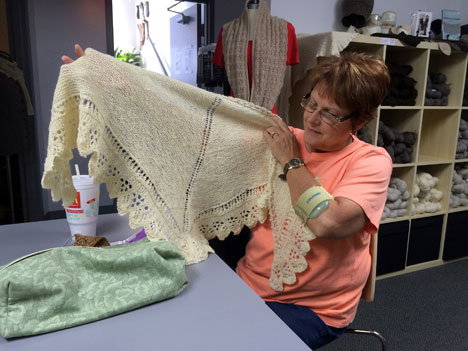 it started out well enough—debbie brought her finished and blocked capricorn triangle to class, which we all drooled over—it looks so pretty and now we’re having the perfect weather for it. 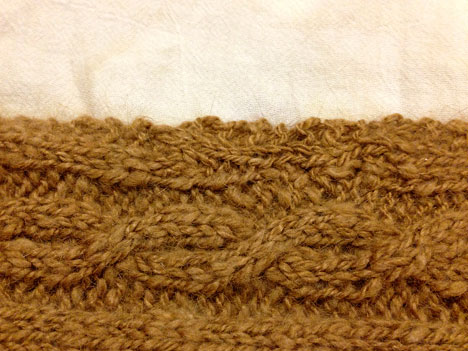 on tuesday, debby sent all of us an update photo of her washed caravan blanket, which she’d repaired in class the week before. just look at that; you can’t even tell it was ever any different. and you certainly can’t see anything resembling a bite taken out of it, haha. 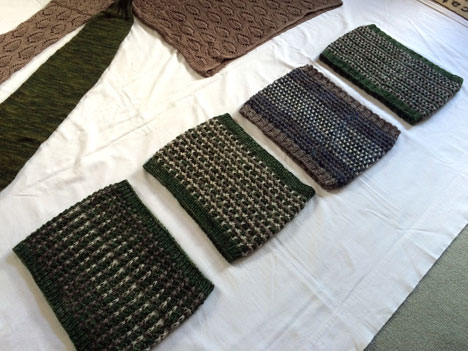 i had that morning, washed all of the finished cowl samples i had knit the week before to get ready for my upcoming color work classes. it’s so interesting—the bottom two are form the same pattern and the top two are also from the same pattern. but you can change the look completely by putting the colors in a different order or organizing them differently. most of these are knit with briar rose fourth of july, paired with our own, brand new confection sport.

yep, we’ve got kits—coming up in the next post, later tonight. 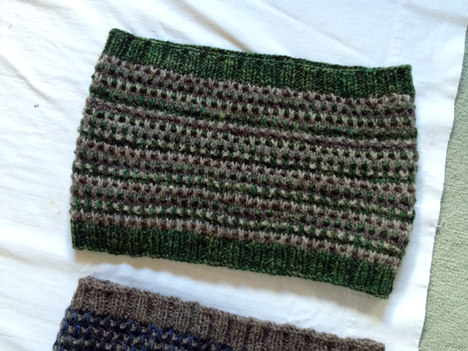 i also paired a couple of them with our stone soup DK, for a more soft and subtle tone. yeah, it’s easy to go crazy making these—as anne marie said, they my latest potato chip project; i can’t stop after just one.

hey there are worse things—and there is no shame in being ahead on holiday gift knitting for once.

or how about this one in an all-neutral palette—is that stunning or what? as soon as we get the sport weight white chocolate shade of confection in, we’ll hustle this kit up into the store, too. 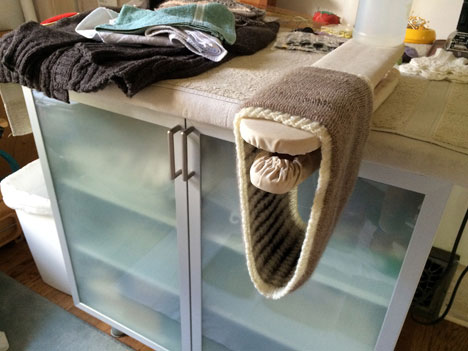 i like this one so much that i even knit a cashmere lining for it, which i felt required a special drying setup. so i cantilevered my sleeve board over the edge of my pressing bench and hung it to dry, turning frequently. 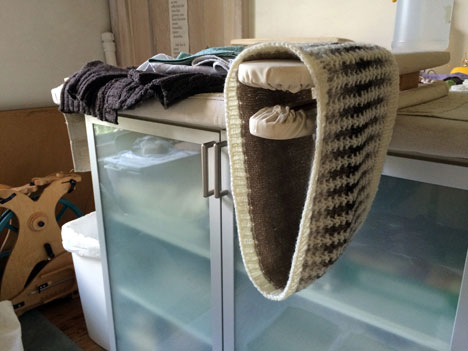 can i just say? nothing says i love you like cashmere and who better to be on the receiving end than you?

cashmere linings take just a few yards (like, 100 or so) and almost no time to knit, but are the absolute essence of luxury. i used our pura bella mongolian cashmere; one skein will make three or four linings—enough for all your special knitwear appreciators, with guilt-free leftovers for you. just saying’.

back to reality, it was an awfully long night last wednesday getting those last few tasks finished for our weekend at yarn in the barn at briar rose fibers in michigan. since i was up early on our travel day too, i took one last tour around the garden to gather whatever was out there; i saw the temperatures were going to plummet while we were gone.

then david and i piled ourselves and all of our booth stuff in the rental car and headed out. 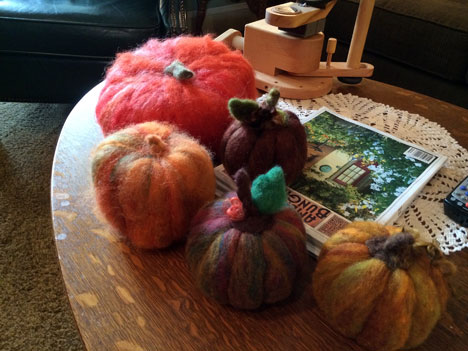 and it was oh, so nice to arrive at chris and rogers lovely home in the late afternoon. to spend a warm, cozy evening knitting and catching up with friends. 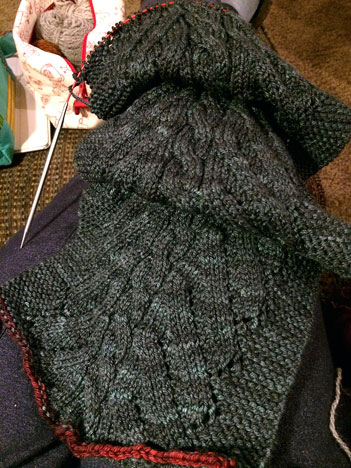 i was so excited about the prospect of getting some knitting done that after dinner, i plunked myself into a chair and barely moved all evening. i worked on my wake and eddy cowl—a new design that i’m knitting in spirit trail birte, a merino/cashmere/silk DK blend. in fact, i finished it up that evening and this morning i grafted it while i had my coffee. 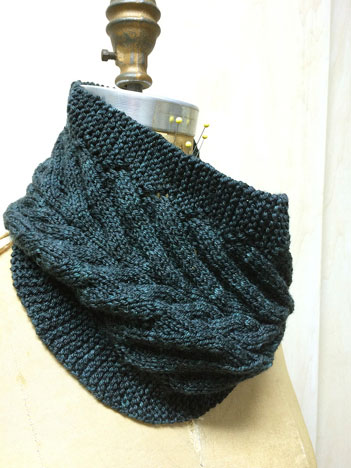 it’s not blocked yet, but you get the idea—a rich, dramatic  swirl of cables with a bit of openwork; i just love the way it slumps in the shorter version. there is a longer version too, which you can make either flat or as an infinity.

barb knit the flat one; it’s over in the office and i haven’t got a photo but we all just love it. we’ll take some nice photos before we leave for rhinebeck next week. this pattern will go live over rhinebeck weekend. the short version requires one skein of birte and the long version takes two. 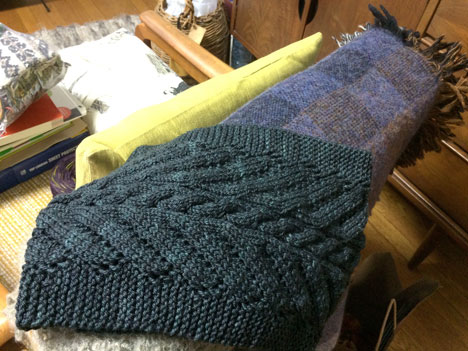 when we left home on thursday to go to michigan, it was 80 degrees and by the time we came home two days later, it was 39 or something. i think summer is really over . . . we’re gonna need these kinds accessories on a daily basis now . . . 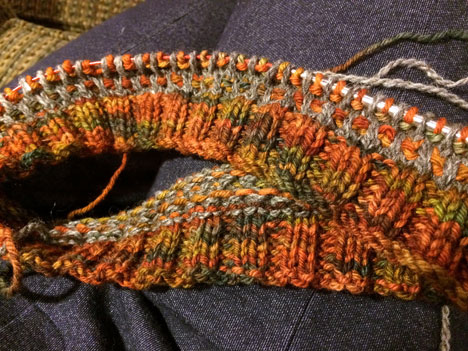 before i left home i had cast on yet another cowl, using some leftover octoberfest fourth of july from our first fall in full color club and several shades of stone soup DK. when i was done with wake and eddy, i took out my barely begun color work cowl and got busy on it. 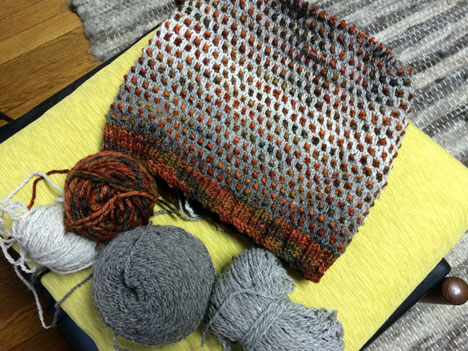 i knit on it throughout the next day and only stopped when i realized i was out of the darkest shade of SSDK—now that i’m home, i will finish it up, probably in class tomorrow. this one is a little longer—the better to scrunch up with pockets of warmth. everyone, including me, enjoyed watching its progress as we worked through our classes this weekend. and because of that, maybe this one is my favorite after all . . . 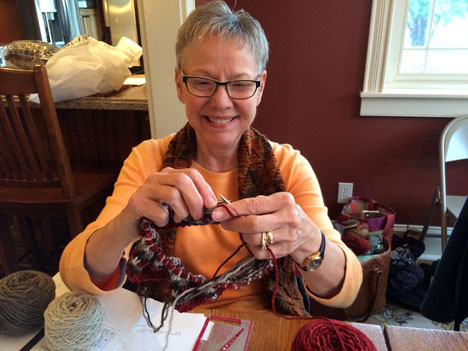 speaking of classes, we had an absolute blast this weekend in our color workshops. judy asked her husband jerry to drive her to michigan for the event—all the way from washington state. and he said yes, which was just our luck because judy is completely lovely. 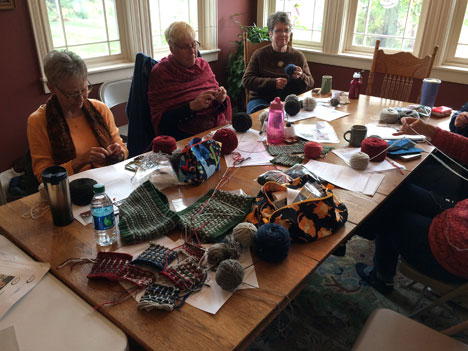 we had the best time, especially on the final day when all of our weekend’s work culminated in our project immersion. 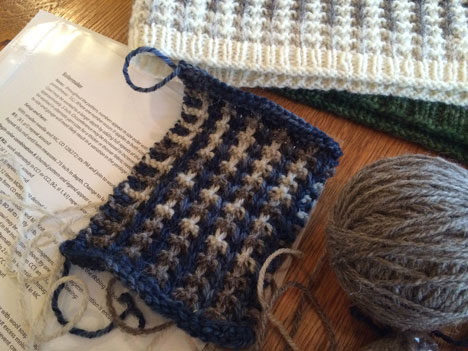 we learned and swatched and experimented. we did some technique work, yes, but the main point of it all was to experience the interaction of color—and by midday on saturday the lightbulbs were going off and everyone was grinning and chattering over the possibilities. 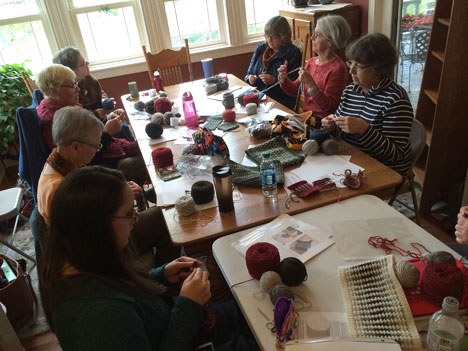 that was very exciting.

many of the participants chose to work with the red kit and yet each of them created a very different expression with it and marveling at their outcomes. so fun. 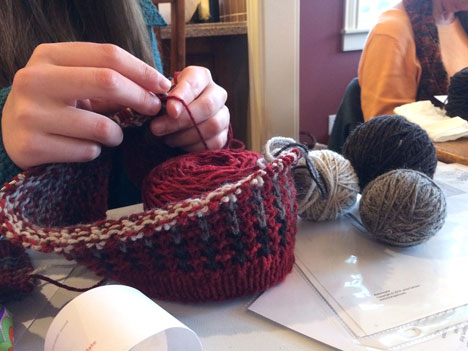 interested in exploring color a little more, maybe in the company of good friends? come join us at our rhinebeck after party event in kingston, new york right after rhinebeck weekend. we will be talking about and playing with yarn and color for three days—learn, have fun, and enhance your stash in our popup shop. click here for more details 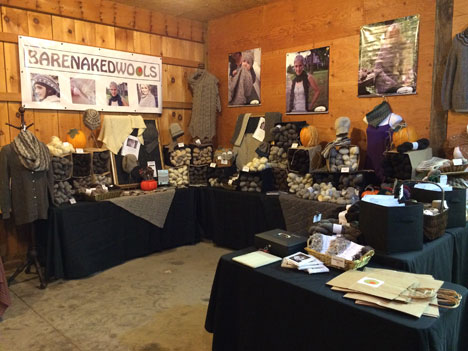 meanwhile, out in the barn, erica and david were hard at work, setting up and running our booth, which looked beautiful. the hottest seller of the weekend was our delicious cabécou brillant. every last skein we brought was sold by saturday morning. people just make a beeline for that one . . . 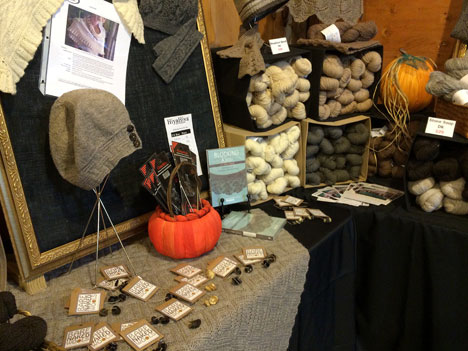 of course we brought all of our yarns, but also all sorts of other goodies. with so many people in our ravelry group finishing up ivar sweaters lately, there was a lot of interest in our ivar kits. 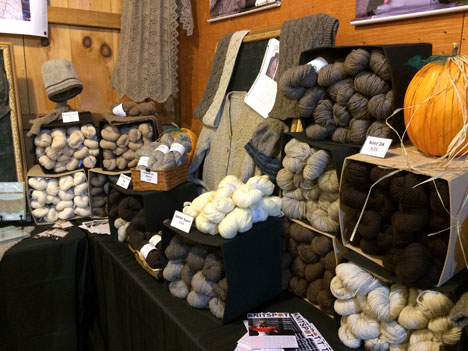 rene and highlander were also popular choices for those looking to knit sweaters and almost everyone wanted a good hat or cowl pattern to knit up for holiday gifts. 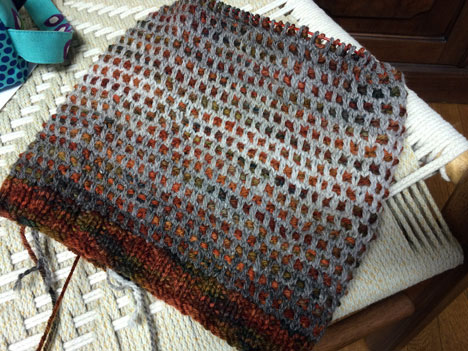 and now we’re home again and wow, today just flew by. i came back with an armload of blocking to do and plenty of secret knitting as well. and of course, i have to finish up this cowl—maybe tonight while i watch TV; i need to ferret out some leftovers of SSDK in slate, which will require a trip to the office. haha, good thing it’s not far! 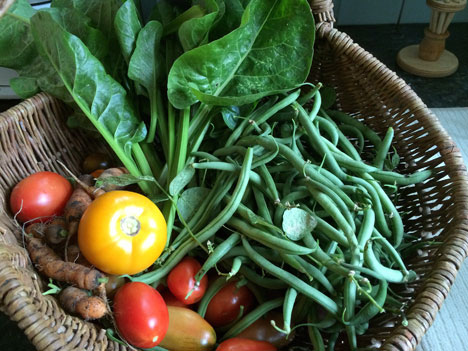 this morning i was looking out the kitchen window and noticed a bunch of red tomatoes on the vines—i don’t even know where those are coming from in such chilly weather, when we hardly got this many in july.

and seriously, the green beans? still pumping away; i picked another pound of those this morning too, along with some swiss chard and a few carrots that i pulled to snack on.

well, someone said something about releasing a couple of patterns this evening so i’d better go see about that—i’ll be back in a couple of days with an update of blocked and finished knits.