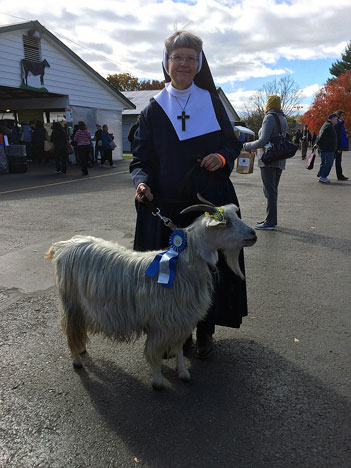 i know—there is no excuse for telling you i’d be back in a few hours and then disappearing for a week, like a bad boyfriend! hopefully you will accept a peace offering of my favorite rhinebeck photo.

i mean, a nun walking a goat?? i had to bring that one home for you. 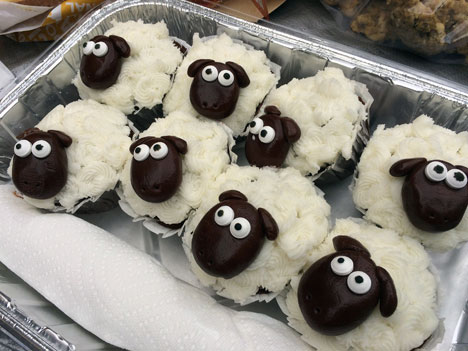 the rest of our wool show weekend was very, very fun. i worked in my friend chris’s booth for the part of saturday, but after that, i got to shop for kimkimkim and visit with friends at our annual picnic.

after some knoshing and visiting, josée handed around the swap packages and we all unwrapped our gifts—time to see whether my swap recipient liked her shawl . . .

i didn’t sign my card so at first, she didn’t know who the heck she was paired with. then she noticed that erica and i were furiously snapping photos as she looked into there bag. i love that moment when she finally caught on about what we were up to, haha

well, she was surprised for sure—yvonne had just one a prize at our grand opening celebration a couple of weeks earlier, so this was a double treat for her. in fact, at the GOP, i tried to get her to tell me what her favorite design was, but she said it was the dutch tiles blanket and i wasn’t up for knitting that in time for the swap, haha. 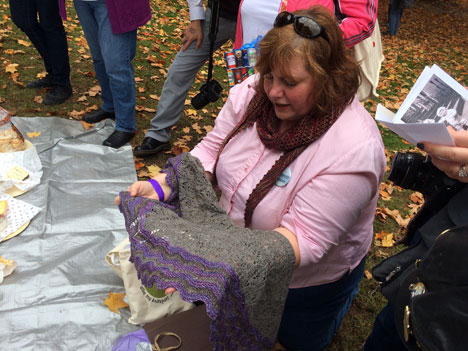 anyway, yvonne likes this one pretty well, i think. 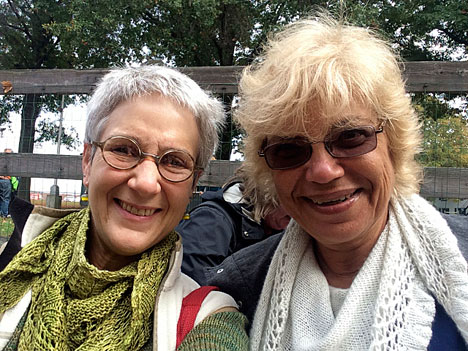 and i got a perfect-for-me little les abeilles triangle scarf from lynn, my swap partner 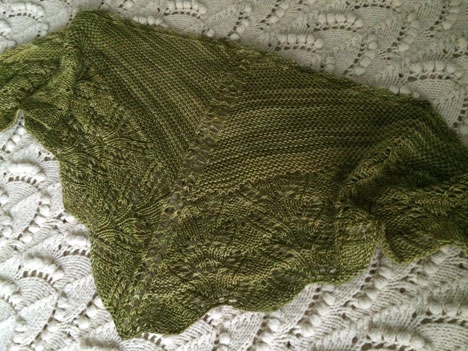 i love it—the colors in it are really beautiful to look at and it’s knit from bugga! she included a hilariously appropriate card as well 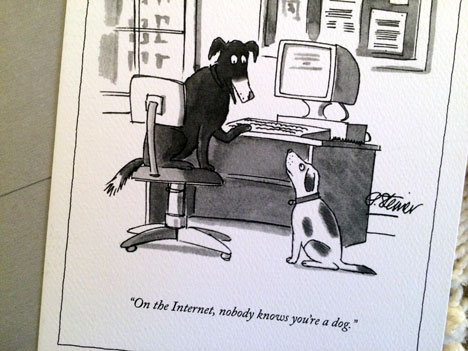 don’t you just love it? 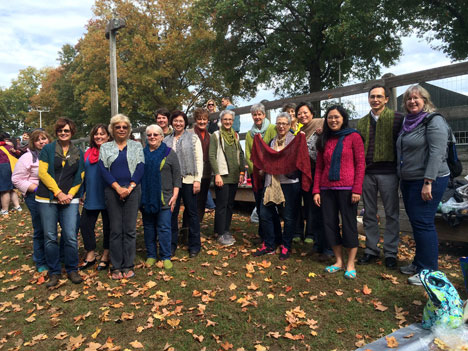 i think everyone was really happy that day; many thanks to josée for organizing the swap which added such a fun and endearing component to our annual picnic. i hope we do it again next year . . . 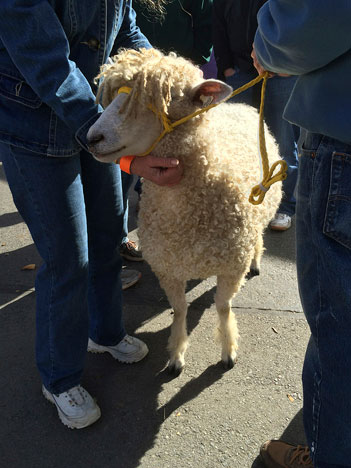 after lunch i was able to wander around a bit with anne marie, who was at rhinebeck for the first time. she and barb had spent quite a bit of time shopping in the morning, so i had some catching up to do.

i picked up a sweater quantity of sea pearl while working in the briar rose booth that morning—i wear my blümchen so much that i feel a need for a second sweater knit with this superb yarn. it’s so versatile—warm enough for chilly fall weather, but light enough for springy days too. and it’s dressy, too—but not so much that i can’t wear it with jeans and active wear. this is a fresh new colorway for chris, which i snapped up the moment i saw it. 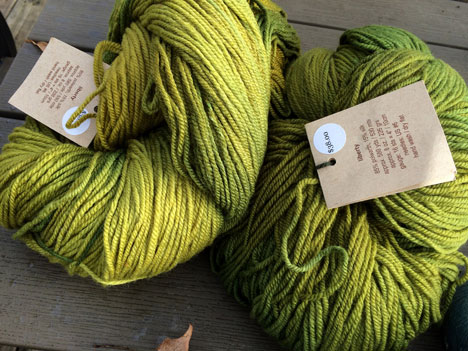 and then i found these two skeins of her polwarth/silk blend which i was going to put in kim’s bag, but then decided i had to keep instead (i’m going to try to squeeze a sweater out of it). at this point, i didn’t know yet that my swap partner was knitting me something in the same colorways, but it’s uncanny, isn’t it? 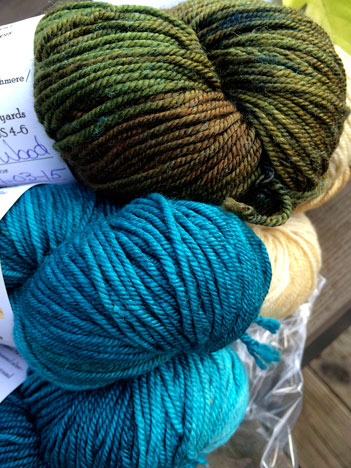 for kim, i got a sweater quantity of spirit trail sunna like the top skein here—a new colorway called faerie wood. and then i got her some nona lace yarn in that aMAZing turquoise color called corfu (my skeins are all in the birte base) 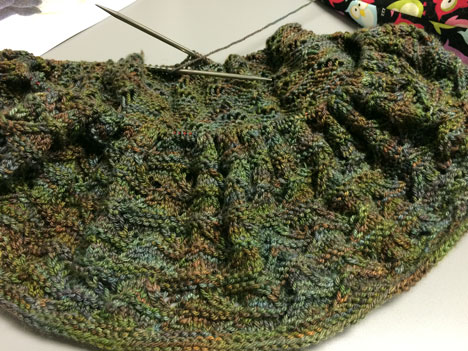 that faerie wood was popular with our group—we ALL went home with some; sarah in verdande, barb in sunna, and me with the birte. barb got right to work of course and is knitting up the sculling cowl with her sunna—a great choice. i think kim’s batch is a bit more green, which will be nice for a sweater fabric.

i also got her a surprise purchase (hey, she said “no limit” and i’d barely made a dent!) of something a little heavier to knit into a great big winter cowl or cozy accessory for herself—she lives in a snowy climate now, she’s going to need it.

i actually thought about keeping the surprise yarn to knit her something for christmas, but then did a reality check and decided it probably wasn’t going to happen and keeping it would be a waste because it’s something she’s going to love. 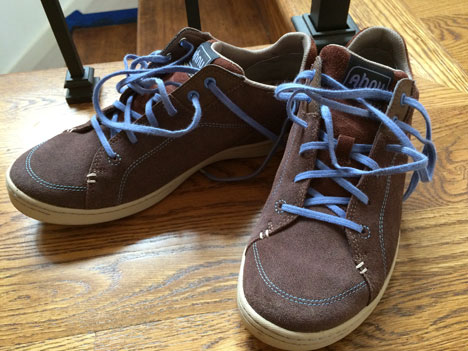 after the show we stopped off in town to visit our favorite boot shop, where we all actually found something to love. we won’t divulge how many pair of boots barb managed to buy, but suffice it to say that she earned a “free” gift. i found some awesomely comfy laceup shoes that are perfect for long teaching and travel days or when we are doing a booth (and when i linked just now, i might have bought a second pair online. so barb isn’t the only shoe sucker you know).

that night we decided to grab a quick dinner, get back to our cottage afterward, and into our jammies for another evening of knitting.

i worked some more on my color work cowl while we all admired each other’s purchases. 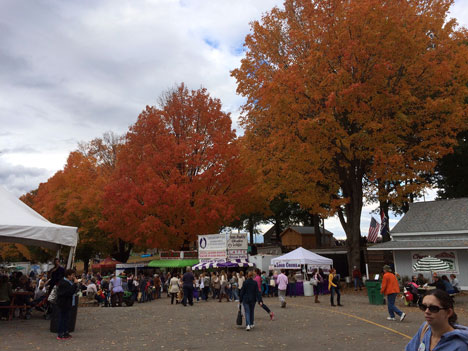 on sunday morning, anne marie and i went back to the show for her last morning with us. with fewer crowds, we got to wander in a more relaxed fashion, stop in to say hi to friends, and get a closer look at the wares remaining in the barns. 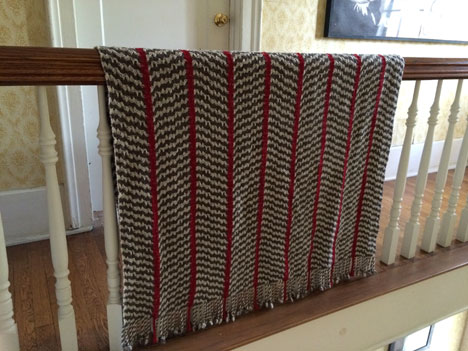 now, you know and i know that i should never go anywhere near the bedfellows blankets booth, but that’s exactly what i did, first thing we got into the big building. peggy hart always has something special and this year it was this bold gray/cream/red throw in a sturdy weave that made use of an over-twisted gray merino yarn, unsuitable for other purposes. 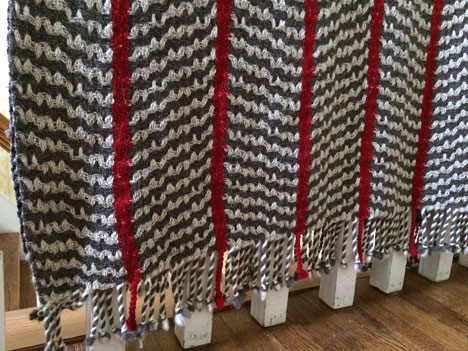 the high twist creates a texture and density that pushes it to the background, allowing the lighter cream yarn to rise to the surface. anne marie bought a lighter throw made from the same yarn in peggy’s log cabin pattern, like the one i purchased a few years back 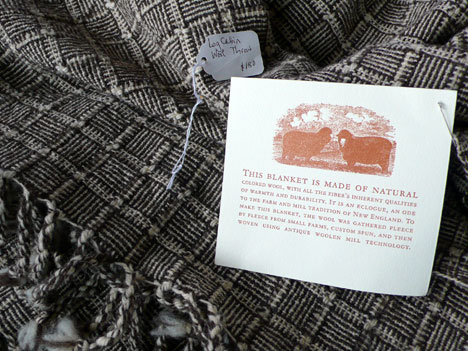 but hers is in that unusual textured gray. while we were in the booth another person popped in because she had seen peggy’s blankets on my blog in other years; hurray!

while everyone was chatting, i spied another piece i instantly fell in love with. a lightweight throw just perfect for summertime napping. i don’t know about you, but i can’t sleep well without some kind of covers, even in summer. this year i was longing for a very light linen blanket, something to cover, but not hot (linen is so great for that). 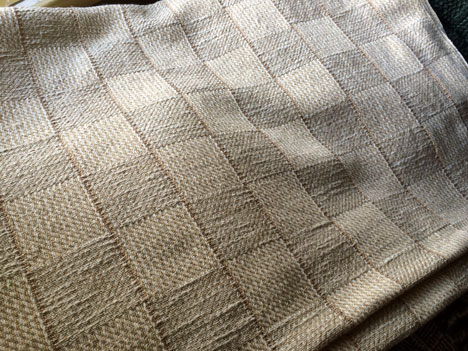 this sahara cotton/linen throw is exactly the thing; just gazing across its surface makes me feel cool and restful. after swearing i was done, somehow i became distracted and my check writing hand bought it behind my back. what could i do?

after this we left the building and made a trip to the car—blankets are far too heavy to carry around the fair. it was on the way back that we ran into sister mary elizabeth and her goat; what a hoot (or a bleet as it were). 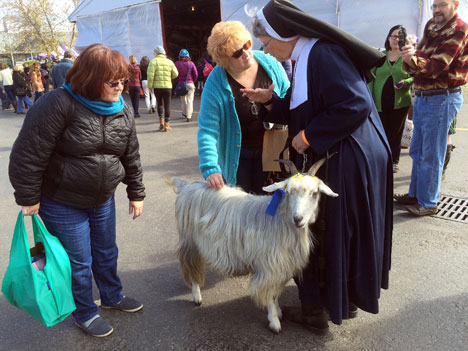 i just wish i could remember the goat’s name. 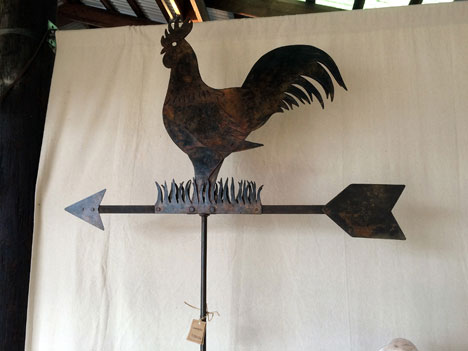 another booth i really enjoyed was the germond metal works, where jesse and hallie germond were enjoying an exciting first year at the show. they produce beautiful metal sculpture and functional metalwork goods, such as weather vanes, signs, fireplace screens and other household fixtures. 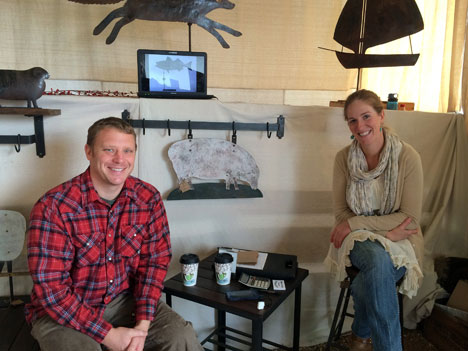 these two are completely charming and their work is really cool. i have been wanting a weather vane for our garage for many years and as soon as we can get a new roof on that building, i’m hoping to add one of these to it. 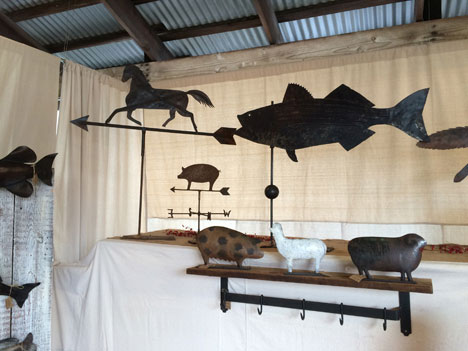 i LOVE the striped bass. or the pig. or maybe a sheep is more appropriate. but of course, an olive is always a possibility, too. (this is why we don’t have a weather vane yet; you have to choose). 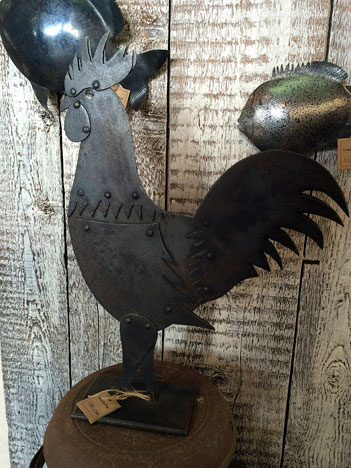 i really wanted to get this rooster for kim and kade, but i wasn’t sure they’d want it and my text didn’t go through. i figured they could buy it online if they see it here and like it that much. i like how it’s made in pieces and joined with studs, so it looks a little mechanical, like frankenrooster. since all the sheep were gone by then, i settled on a smaller standing hen sculpture which i’ve been enjoying as an addition to our dining area. it’s folk art, but modern; i love it! but it may migrate to the shop in due time, as it would be beautiful next to our yarns. 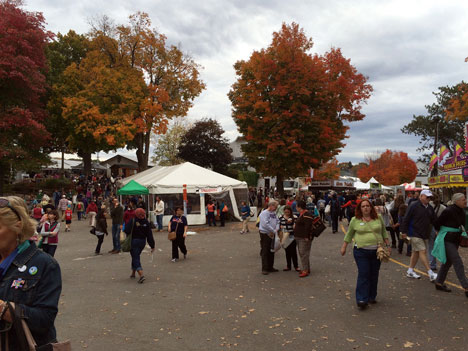 by now we had to make our way over to kingston to get ready for the opening of our popup shop at the marriott and so anne marie could be on her way home. we hated to see her go; it was SO MUCH fun that she joined us this year. all the night before, erica had been hard at work in the hotel conference room, setting up our shop. it looks GORGEOUS when we arrived; i was so excited when i saw it. there she is, wearing the danger cowl that she received in our picnic swap, knit for her by barb in our ecobutterfly organic cotton worsted, colors deep green and sage. it’s so soft; erica barely took it off for the whole rest of our trip. 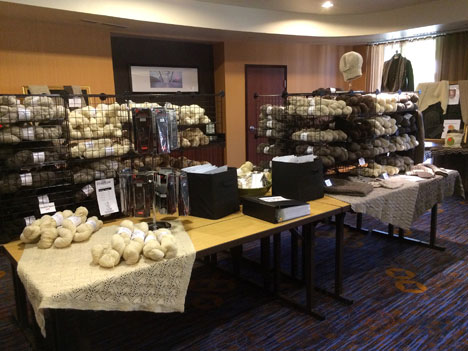 with the popup ready to go we ran around looking at the yarns as if we’d never seen them before, haha. anne marie decided to knit another color work project, bogolan by Elizabeth Davis, a very clever and modern design that met with immediate approval from all of us.

we pulled some of our new confection sport for her to work with and then off she went to home.  we missed her instantly . . . but she sent photos just  a few days later of her bogoaln progress and wow, it’s even better than we thought it would be. as with many of our yarns, the loft in the confection can cause a fabric to feel a bit stiff if knit on needles smaller than size 6US (4.0 mm) or so, especially in color work. i’ve been using it on size 7 to 8US (4.5 to5.0 mm) needles for my recent projects. anne marie found she had to size up too, but then was able to work one less repeat in height to make up for that. 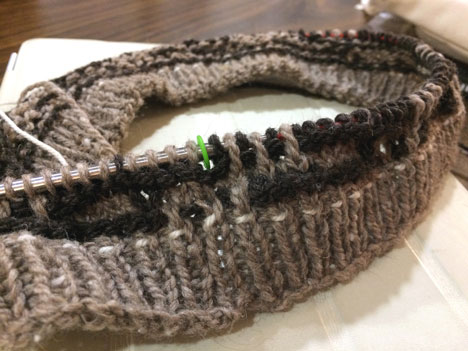 picking out the yarn for bogolan reminded me of a new two-tone design i’d been itching to start knitting on and while anne marie picked out her yarn, barb and i picked out two-tone sets for the new design. i’m using stone soup DK for mine, in travertine and river rock. as you can see i’ve placed a lifeline at the top of the hem so i can go back later and add a cashmere lining. not that the stone soup needs it, but i thought it would be a good chance to do a series of tutorial photos—hopefully for a post early next week, for those that have been waiting.

one of the tasks on my to-do list for today is to write up the pattern so barb can get going on her sample, in kent DK . . . driftwood and white sand, i think. but more on that later . . . back to the party, however—it was a wonderful night! so many people came to shop and visit with us; i always really enjoy meeting knitters who love our yarns and designs. i just wish i could remember to write down their names; isn’t that what smart phones are for?

now for the next three days we convened our after party retreat, with classes, outings, knitting nights, and more—i’ll be back next time to fill you in on all the details; it was another wonderful event.