i’m home for what feels like five minutes and even though there is a veritable tsunami of things to take care of today, i can’t help but notice how much everything has leafed out in the days i was gone. the lilacs have gone from infant buds to blooms and the climbing hydrangea seems to have doubled its presence

while the apple tree has burst out with full blossoms that are already on the downhill turn . . . but holding out for a day or two so i can appreciate them 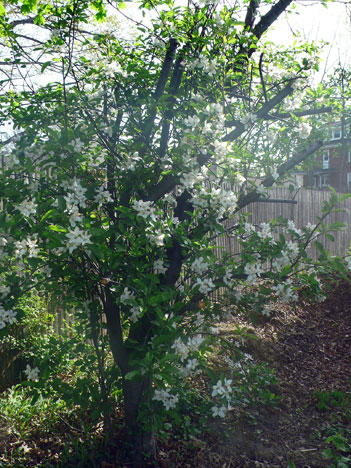 the tree got a severe pruning last week and we’re hoping this might lead to more apples in the fall. i’m sorry about that blurry light surrounding everything—apparently there was a giant fingerprint on my camera lens that i didn’t notice until most of today’s photos were taken. ah, well.

and i can’t get over these chard plants that survived the winter—they are determined to provide an omelet or two before we replant new ones for this year. 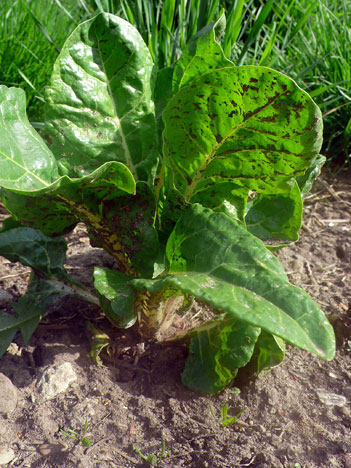 yesterday morning, i was a couple thousand miles from here; i can’t believe it. i got up early, repacked my bags to leave camp and wandered outside to see if there was a parting photo or two i could take while on a short walk. it had been raining and all the ferns that grow through the wall next to the condo we stayed in were unfurling 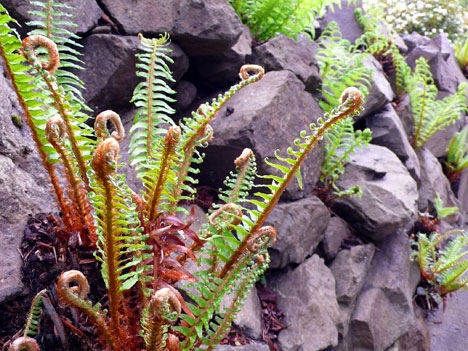 omg, it was so amazingly strange and beautiful—very suessian. perfect. 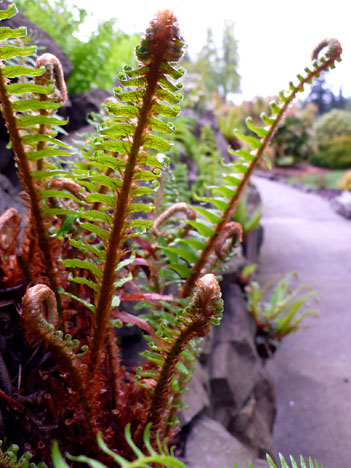 a little further on, the mountains were sharply defined against the gray sky—this is something you can’t see in ohio . . . 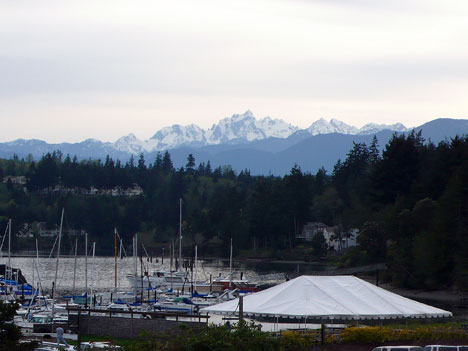 the last few days of camp were as fun as the first ones. we had more crafts and evening antics than you’d think we could fit into a few short days. 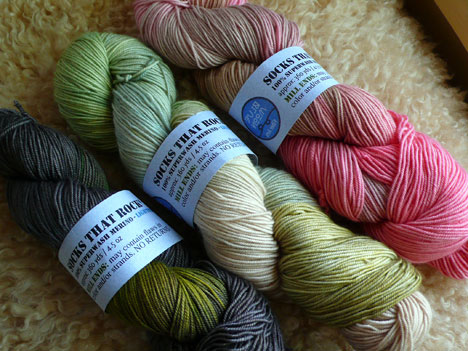 where it seems i picked up a couple extra skeins of yarn . . . or three.
oh yeah—four. 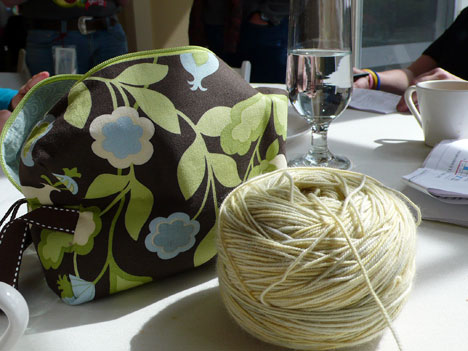 i almost forgot the one i bought and cast on with right away. it’s already becoming a sock and my only slim excuse is that i needed a consolation sock to cheer me up after my failed cabled sock (which i’m going to fix, once i return from spring fling).

i love the way this one is turning out—just what i had in mind for this luscious ethereal colorway. 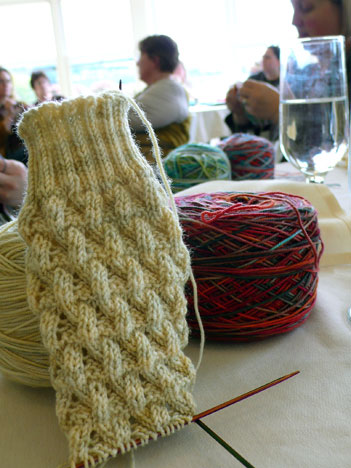 the leg is almost done.

not to mention a skein of our camp colorway that i tried not to purchase (more about that later). that’s it in the photo above, next to the yellow sock.

i wasn’t sure about it for a couple of days and then dang it, someone cast on and started knitting with it and i lost my head. i had to have one, too

after swatching with it for a little bit and conferring with sivia, i decided on a simple knit/purl stitch pattern that shows off the colors in a way i really like. i cast on during the closing dinner party and once i got to the airport the next day, it was game on for this one

by the time i got home last night, i was all the way through the heel and ready to pick up the gusset stitches 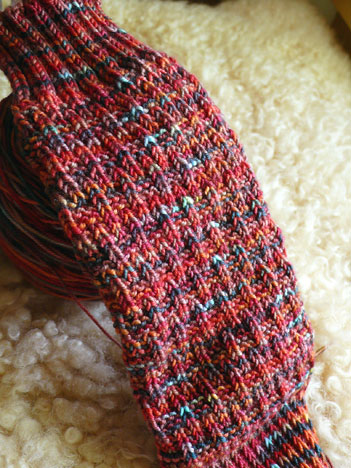 i’m not even exactly sure what we named this color, but i think it is to be called “paula may; a night at the show”. you had to be there . . .

but it doesn’t stop there . . . one more skein was included in the camp goodie bag—named after the camp itself, cattywampus

it also looks really neat knitted up. i’m not sure when i’ll try it out myself, but i’m glad i saw some people knitting with it because now i do want to give it a whirl at some point.

i know i should not have started two more pair of socks, but what could i do??
it was SOCK camp. 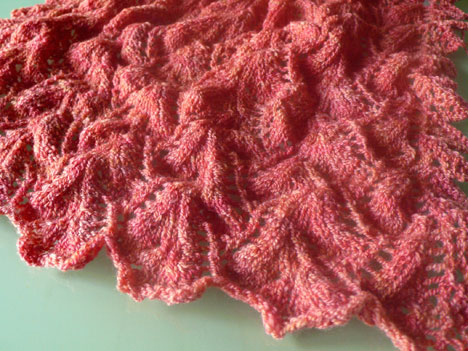 i made sure to work on a non-sock project on the way home too—gotta keep my other knitting skills sharp, after all. and i have this project i’d love to finish while i’m traveling.
i got a few more repeats done on my twinings stole and now i am halfway done with this half. 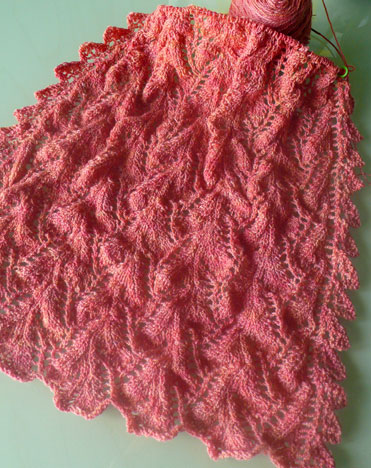 i’ll be super happy if i can finish it this weekend at spring fling; then i can graft and block and be guilt free AND have a new beautiful pink stole. 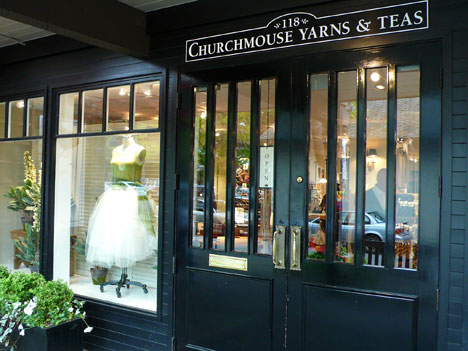 before i got to the airport, i did take a little detour with some friends and campers to churchmouse yarns 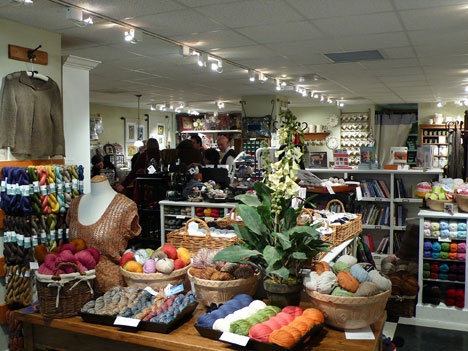 it was a really REALLY nice shop. i didn’t buy yarn though; i found buttons that are wonderful and bought those instead. 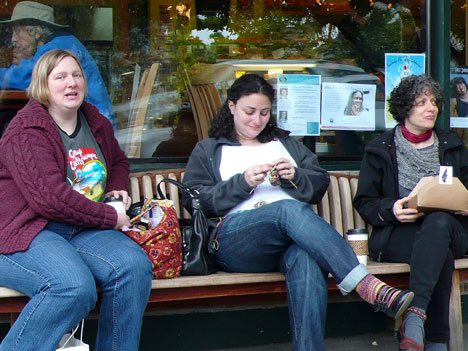 then we had a little coffee and a snack and it was time to head out.
now i’m packing for the next journey and this evening, spending time with david.
in fact, he’s pumping our tires now to go for a bike ride, so i have to end here.

i’ll see you in st louis!