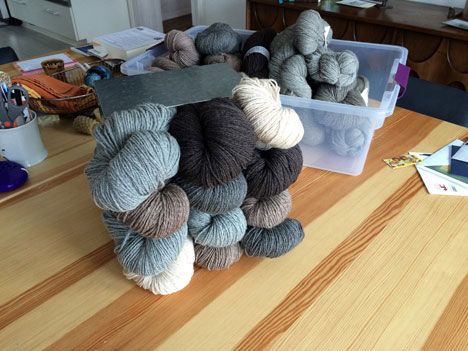 we may have moved the main workings of our office out of the house, but on random mornings i still wake up to find evidence of david’s late-night photo shoots. 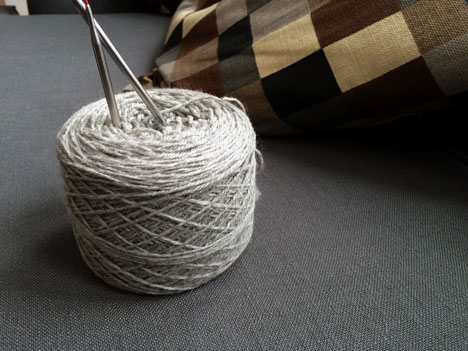 leaving unprotected yarn about—especially soft, delicious better breakfast, tsk, tsk—is SOOooo dangerous; a rookie mistake. why, anyone could come along and just nab one for any reason! i had started the cast on for my reversible crescent shawl in the muesli shade (which i think of as a mix of whole grain colors), but was feeling just a little ambivalent, since i am now knitting a sweater in that shade (more about that later). the daybreak shade (a true silver gray) has been singing me a siren song for a few days now and what can i say?

it was laying about unattended . . . and now it’s MINE.

when we last left off i had finished blocking my sweater pieces and was about to put everything together. 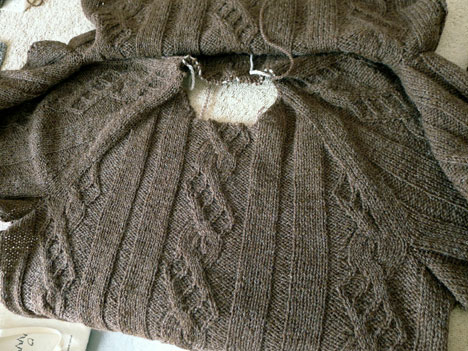 i began with the raglan seams because A) they all need to be joined before the neck finish can go on and B) once they are joined, it’s very easy to steam those seams and give that part of the sweater its final finish. 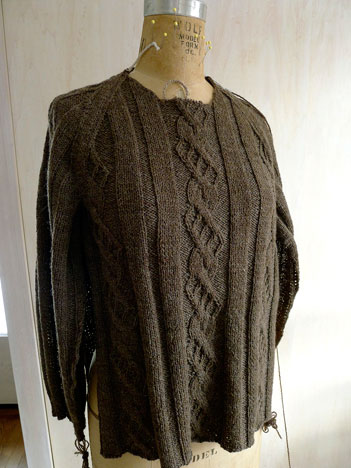 once they were stitched together i threw it up on the mannequin to see how things were looking; this is actually my first chance to asses the garment in three-dimensional form, so i’m pretty excited.

doesn’t that kent DK yarn look beautiful in the daylight? so much better than in my studio under electric lights. 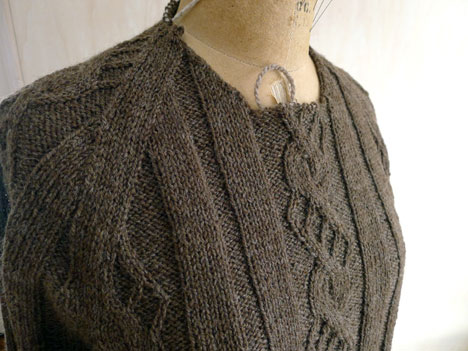 everything looks good—the neck opening is the size i intended, both in actual measurements and in the way it fits—high enough to make the funnel neck stand up , but not so much that it will choke me. 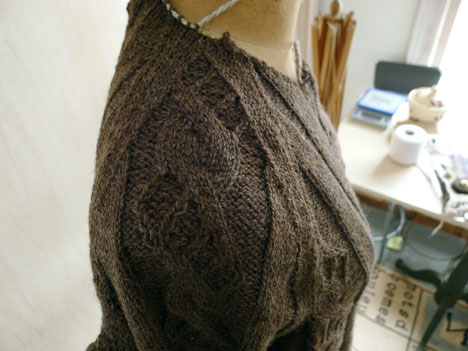 the top of the sleeve sits exactly where it should on the center of the shoulder to balance the way the sweater hangs. i love how the cable ended up in that spot. though i did nothing to influence that outcome, if you wanted it to hit on  a certain row, you could figure it out for your size using the row gauge, the sleeve measurement, and some simple math. then of course, you would have to knit exactly to gauge throughout both sleeves and you know what that means? yes, the S word. do you see now why i like to embrace a certain level of randomness about these things? but i digress. 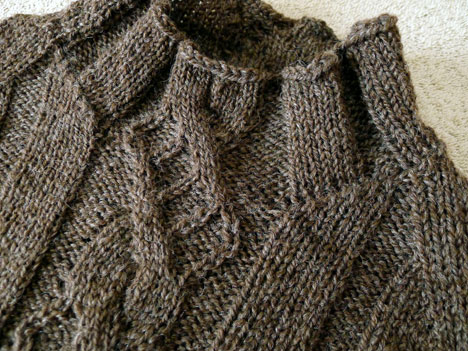 after the raglan seams were done i picked up stitches all around the neck opening, including the ones from the yarn holders. i continued the cable detail back and front, while along the sides i filled in with alternating six by four ribs. i got most of this done in class on monday afternoon.

after binding off, i did pull it on over my head to be sure it would work. adding a band or collar will always tighten up the neck a bit because it adds stability. in this case, it fits me fine and i like it, but i have a really small head and neck. i’m thinking that for most knitters, a larger neck opening—both lower and wider—is going to be desirable so this is one thing i will be tweaking in the pattern (which is why we need a prototype AND some test knits). 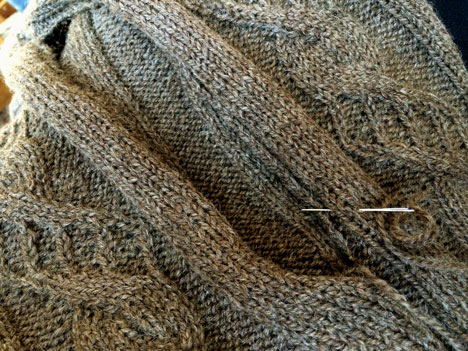 next—and the last thing to be finished—are those long underarm and side seams. i worked on those late on monday night and early tuesday morning. this picture is kind of crappy because i was working on it so early that it wasn’t light out yet. 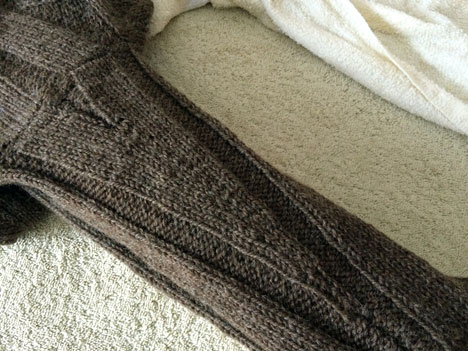 once those last seams were done i gave them a nice steam pressing. ok, when i say that, i don’t mean that i am putting weight on them with the iron. what i do is to get them good and steamy by touching the wet towel with the hot iron. then i remove the towel and “encourage” them to lie flat by pressing down down and holding with the palm of my hand. if i had a wooden clapper, i would use it for this job, but i keep forgetting to look for one—i like to purchase these kinds of tools second hand, where someone has already used it for years. but i’m so busy and have so many projects crowding my mind, that i lose track of things i mean to do . . .

the use of steam is an old—maybe even ancient—tailor’s tool that can be employed whenever wool needs to be molded into an irregular, dimensional shape—like a collar stand, a rolled lapel, a slightly bowed seam. it can also be used more aggressively to shape heavier objects like felted hats. it’s one of those skills that you learn to do with a certain measure of intuition—knowing exactly what’s needed, how much, and what level of pressure, is kind of indescribable; it’s just something i know. i love steam for this reason and at the same time, i wonder how many people make use of these methods any more; is it going by the wayside? i don’t know . . .

enough of my blathering—let’s try the dang sweater on already, shall we?? 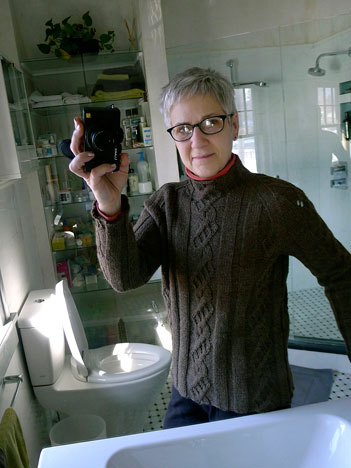 YAY, it fits!! it’s still a little scrunchier than it should be at its final size so the next thing i did was to sink it into a hot, soapy bath to allow the garment to relax to its final shape and size. 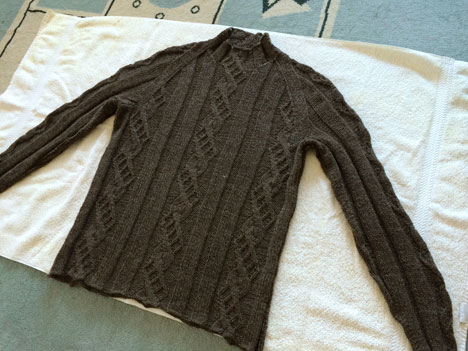 after a good soak for an hour or more, i squeezed the water out and laid it to dry. one nice thing about the kent DK is how airy and light it is when knit up. after a bath that removes those final vestiges of spinning oil and dirt, the fiber blooms readily and becomes a wicking machine. which means that it dries in practically no time.

the blooming fibers draws all of those stitches into straighter rows and columns, making the fabric surface a dream of sleek, vertical lines. the sheen of the lustrous romney fiber enhances the textured patterns in the fabric. the gold tones in the kelp shade that i chose to work with are especially sparkly in the sunshine.

a final try on wednesday after it was dry—it turned out exactly the way i wanted it to look and i love it.

well, i have lots more news about my next sweater project and a few other things, but i have to run to a meeting right now—catch you tomorrow, ok?