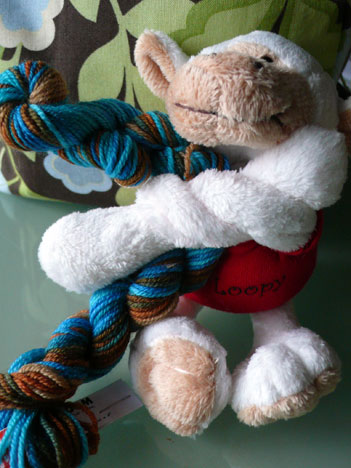 by 1 pm today, it started to dawn on me that there wasn’t enough coffee in the world to dissolve the fog in my brain and i should resign myself to being a little behind all day. what a weekend . . .

my second spring fling was as fun as the first and this time, i had the pleasant experience of catching up with participants from last year, as well as meeting new friends 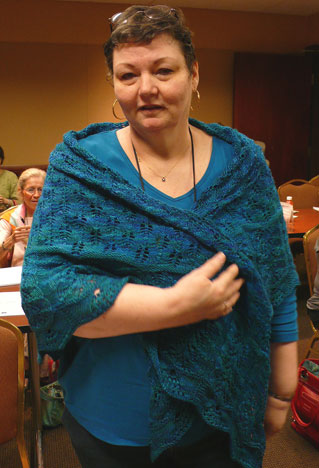 katj, everyone’s favorite in our ravelry knitspot group, was in da house with beautiful wing-o-the-moth shawl and a smile 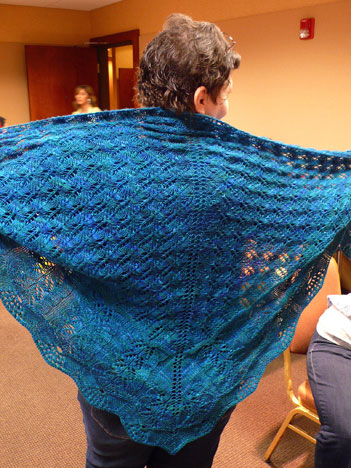 it was so nice to finally meet her in person—she always makes me grin when i read her posts and comments, as well as the nice notes she adds to her pattern orders. but wow, ravelers, her photos do NOT do her justice—she’s ten times prettier in person; just sayin’ . . . 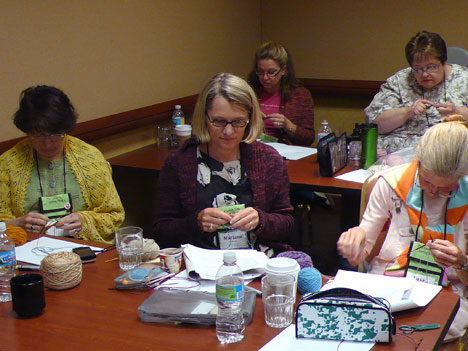 we had a couple of advanced lace classes; that’s maryann in middle of the photo—she came all the way from sweden for the fling, managing to circumvent the volcanic ash disaster of last week (claudia of wollmeise was not so fortunate and had to cancel her trip). 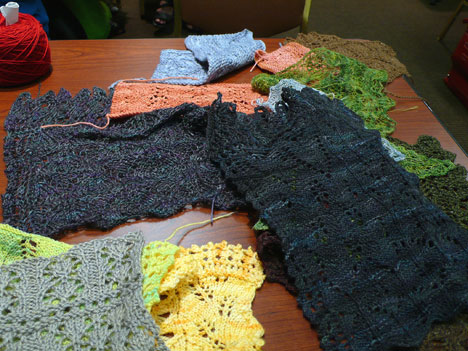 a new feature of the class is that i bring a library of swatches along to illustrate the yarn discussion and fondling them has become a favorite part of the session for everyone. by the end of class, the orderly arrangement of the pieces is totally violated (grin!).

we also had a couple of sweater fitness classes. once again, i did not write down this wonderful knitter’s name and with my brain not working right today, i cannot remember it. sigh.
she has knit three ondule sweaters, all in briar rose grandma’s blessing—doesn’t she look great in it?

the weekend was a blur of classes and socializing; with hardly a moment to open the computer, much less blog—sorry about that; i hate not writing for days. i arrived home to find i had very few pictures in my camera—none of my fellow teachers, wendy, gryphon, and jared, all of whom i admire and enjoyed getting to know better.

there was also a private teacher’s trip to loopy central on our first night—i would be a little embarrassed about getting special treatment except that it was so fun, hehe.

i really enjoy looking at all the stuff in sheri’s shop and the way it is organized; she carries an amazing array of products from indie fiber artists. you’d think an online shop would be more industrial behind the scenes, but sheri makes hers a home away from home, with beautiful arrangements and accessories everywhere. and did i mention neat?
i wanna be just like sheri when i grow up . . .

while i was there, some credit card damage may have been done . . .

i was really REALLY good about the yarn—i can be pretty callous when i need to be, especially in light of all i brought home from sock camp.

i purchased just one skein of black trillium merilon sock yarn, which roped me in before i could gain my senses and would not go back on the shelf no matter how i tried. 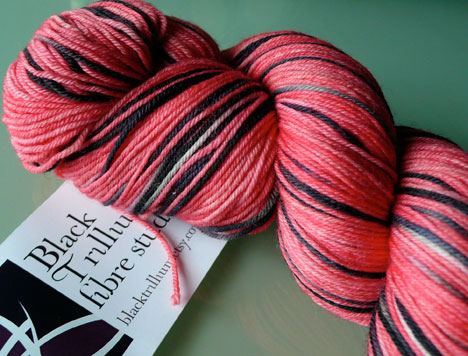 the colorway is licorice twist—SO not me, i know. but i swear, this skein took one look at me, screamed “cookie!!” and jumped into my hands. i just knew if she was there she’d buy it, so i had to get it, too—she made me.
virtual peer pressure is a terrible, powerful thing.

so just one brilliant skein of yarn, but i succumbed on something else that i wasn’t shopping for, didn’t need, but had to have, once i saw it. 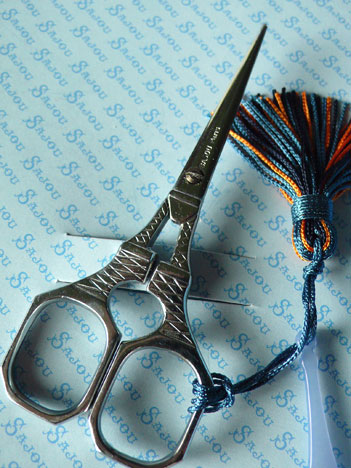 it was wendy’s fault.
these are a pair of sajou scissors, a new item in sheri’s shop. wendy was dithering over the fancier, tortoise and ivory ones when i happened to walk by. i was like, “oh, those are so pretty!” but totally immune, having many excellent pairs of scissors at home, including my very first pair, a christmas gift i received at the age of six or seven (wiss needlework scissors; still used daily).

then sheri pointed out the eiffel tower set and my hand shot out and clamped down on them so fast it would have made your head spin to watch it. just terrible.
i don’t know what it is about the eiffel tower but i do have a thing for it, and by extension, any representation of the structure. these are such a brilliant translation of that architecture into a functional object, really—they were irresistible.

the final thing i purchased was a replacement for my knit kit, which was a gift from my friend chris last year and which i used a lot. i like the way it organizes all the tools i need in one convenient package that is slim and very portable (unlike my old traveling toolkit). my little las vegas nephew, amad, fell head-over-heels in love with it while we were visiting last year and i couldn’t bear to take it away from him when we left. this time, i got a turquoise one; it’s already found a home in my traveling bag.

i received two lovely yarn gifts over the weekend that i want to share. the first is very special—created just for me by sally and stacy 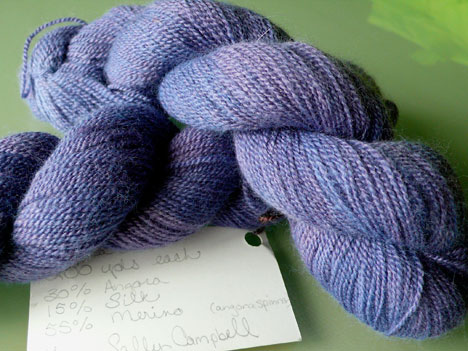 sally raises rabbits and has the fiber spun together with silk and merino at a small local mill to create a gorgeous, soft lace yarn base. when i saw her wing-o-the-moth knit up in it, it took my breath away.

she got together with stacy, the dyer behind tempted handpainted yarns, and together they devised a colorway for these two skeins that they thought would look great on me (and i have to say, they did a bang-up job, didn’t they??). it’s really dark here today and i was having trouble photographing the color, which is a little more gray and muted than you see here—something like this photo below, but not so shadowy 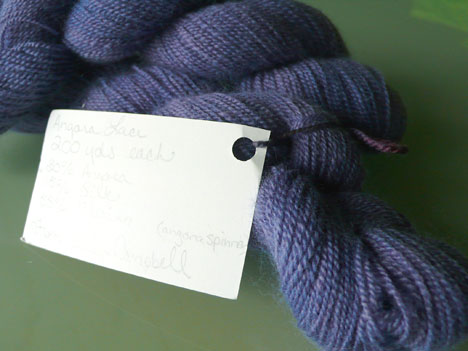 it’s so perfect for me and i’m so touched, i could cry.

i have 400 yards which will almost certainly become a little triangle shawl—if i can manage it, i’d like to get that on the needles before i go to visit kim in san diego in mid-may. i always say, there’s nothing like a pretty little shawlette project to take on vacation . . . 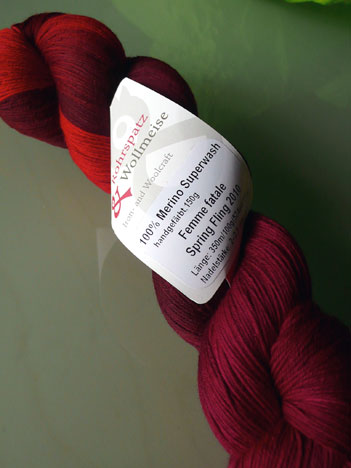 a richly-dyed skein of wollmeise sock yarn in the femme fatale colorway—ooooh (at least, that’s what my kniting class said when i showed it to them this afternoon). i really missed seeing claudia at the fling this year; i wish i could have thanked her in person.

like last year, i got tons of knitting done during the days of the retreat, especially on my sock projects. the two socks i started at camp got the most air time 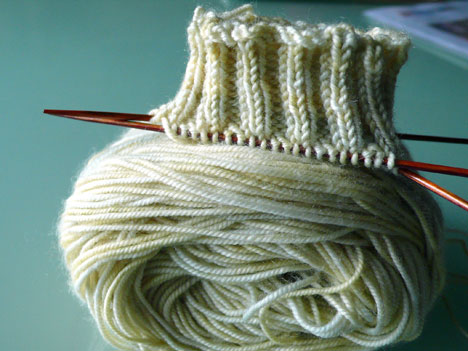 this one in STR lightweight, in the lodestone colorway just flowed off the needles and by the end of the weekend it was done 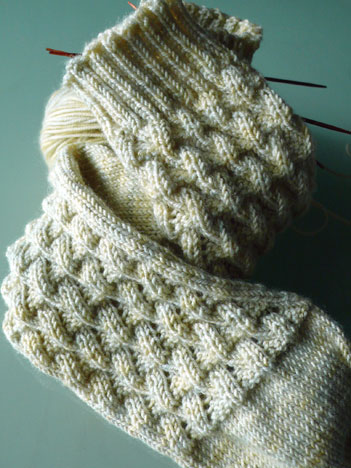 but when i tried it on, it was strangely snug and felt sorta rigid all over, even though it should have been my usual size for this yarn (according to my math). during class today when i was examining it, it finally clicked—i knit the whole thing on one size smaller needles than i meant to. oops. i’m not really sure how that happened, since i swatched on the correct needles, but i’m going to blame it on camp, where i did the cast on (i should know better, haha). it’s sure to fit someone . . . but now i’ll need another skein of that color because i wanted that particular one for myself. 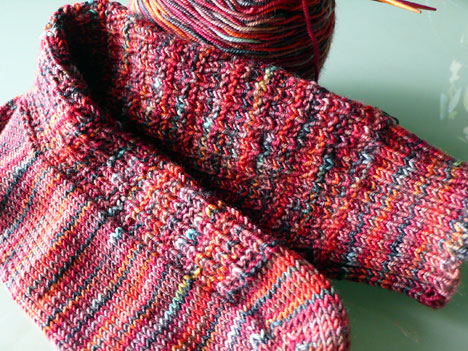 my other camp sock also whizzed along as a great companion project for socializing. again in STR lightweight, this is the colorway we named at camp—paula mae. i don’t see it on the website yet, but i’m sure it will appear at some future date—it’s just too irresistible not to. i love the magic carpet feeling of the colors. and they fit exactly as they should. 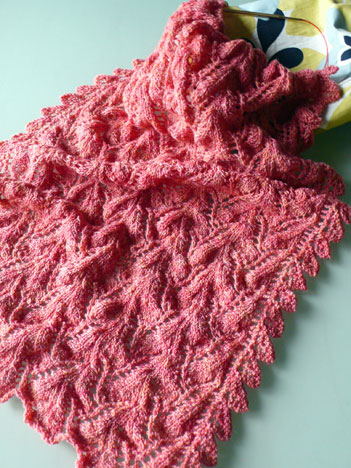 i got plenty of work done on my twinings stole as well—almost finished; i have just two more repeats of the pattern to do and then i can graft and block it. i should be able to knock that out tonight, in fact. 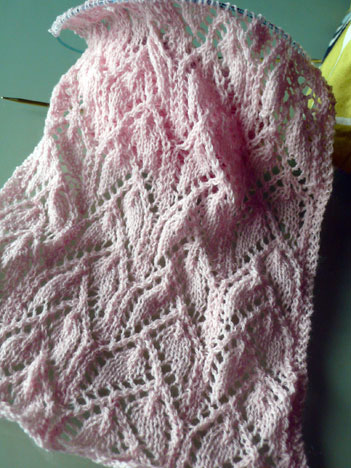 it seemed like a good idea to bring it since it is an easy pattern that i’ve already memorized, but no—i need to keep my eyes on the fine yarn a little too much for it to be good in a crowd. it’s a better choice for airplane knitting . . .

i brought way too many projects along, but that turned out to be good—i ended up spending nine hours in the detroit airport yesterday, waiting for my 30-minute flight to akron. oy. myself and three other ladies got caught in a black hole of airline delays and connection issues. my traveling partners were completely amused by the fact that i finished two socks and almost half a stole during our wait.

i’m so glad to be home—can you tell?? i’m anxious to block and photograph the baby blanket i finished before i went to camp. i have several patterns backed up that just need a few final touches which i had to be home to finalize. now i’ll be able to release them over the next couple of weeks. and of course, i’m also pumped to start working on some new patterns—a couple of shawls and the socks i’ve got on the needles now. lots of exciting work to begin.

and then there’s the garden—it’s time to get the ground turned and it looks like my friend kris came by with a few things to plant already. we’re finally getting a great dose of rain (miserable may came a little early this year) which will help soften the vegetable plot for tilling. 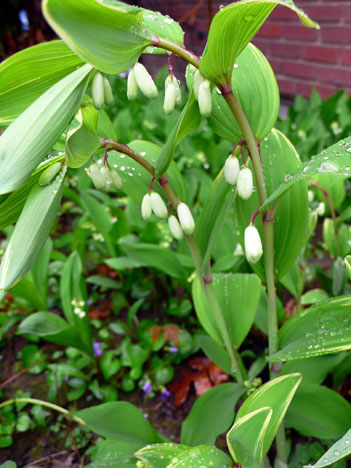 (variegated solomon seal)
newspaper is piling up for the mulch and david took a soil sample for testing last week. we are primed and ready; i just have to figure out how i’m going to fit all that into my calendar, heh.
well, every year i say that and every year i manage to make room for it. 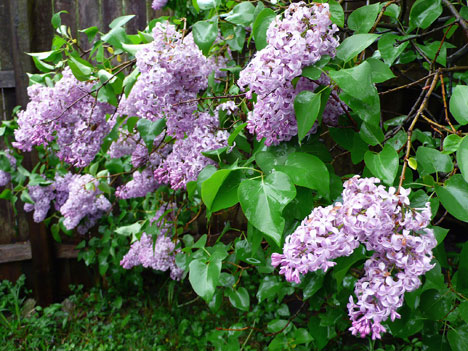 in the meantime, i’ll take a last couple of weeks to get my ducks in a row and squeeze in a short vacation with beckie to visit kim in san diego. after that, it’s show time.

aren’t the lilacs beautiful this year? 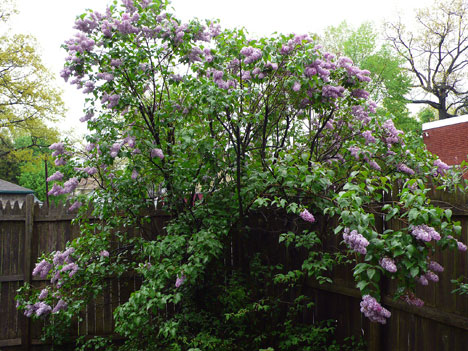 after complaining that the bush wasn’t producing well and maybe needed to be cut back, it defied me absolutely by exploding all over in thick, lush blooms from top to toe. the other side that faces the back street is just covered with them. who knew??
i guess that pruning that david did two years ago is finally showing results. 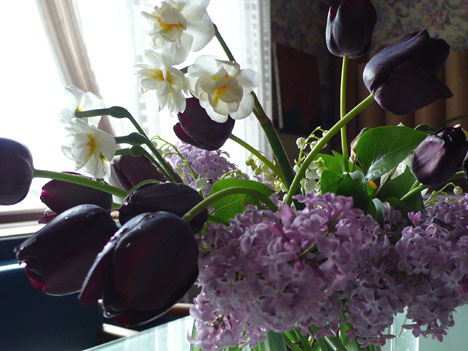 though we are highly allergic to the flowers, i brought a few in to add to this vase of black tulips, white jonquils, and lily of the valley. they’re too perfect. 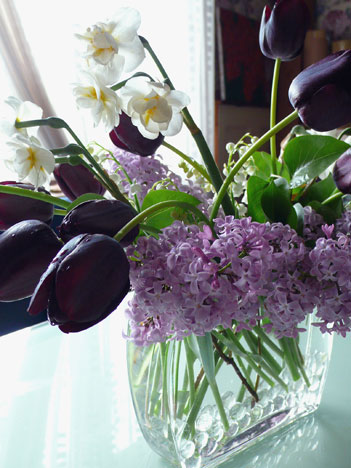 well, i think that’s about all i have for the moment, or all my brain can handle right now. i better go see about my email—looks like i have nearly 600 messages to get through over the next day or so—wish me luck!

and here’s a few more flowers for you