in some alternate universe, this is how my sunday morning should have looked. i planned well ahead that it would anyway, in the kitchen til well after midnight on saturday getting all the garden produce cooked and stored so that i had nothing to do on sunday morning but knit and go for a run. 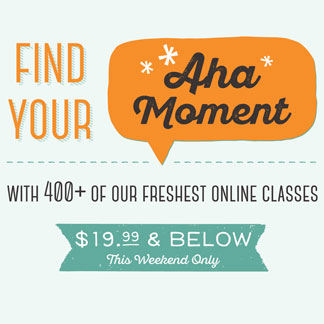 a quick note before you read on—craftsy is extending their weekend sale til tuesday. over 400 classes at $19.99 or less available through my affiliate link (clicking the link activates your savings code and earns a little extra for us, no matter which classes you choose). if you have a wealth of garden produce like mine, you might be looking for new ways to use those extra vegetables. this offer can be used on wonderful classes in cooking, canning, baking, knitting, sewing and so much more—learn something new at a great discount (usually about half the original price). 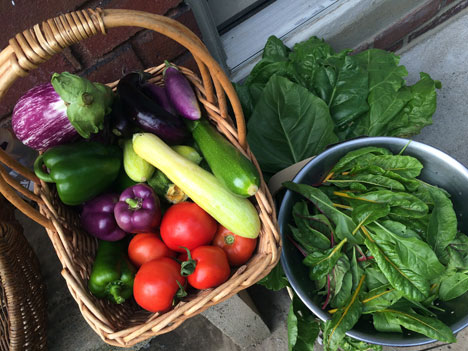 saturday’s garden haul was quite substantial—more than i expected, having been out to collect stuff the previous day. i went out early to cut a bunch of greens and whatever beans were ready so we could cook those with salmon for a post bike ride saturday dinner. i figured if i cleaned them in the morning and out them away, it might make short work of what would be a late evening meal. 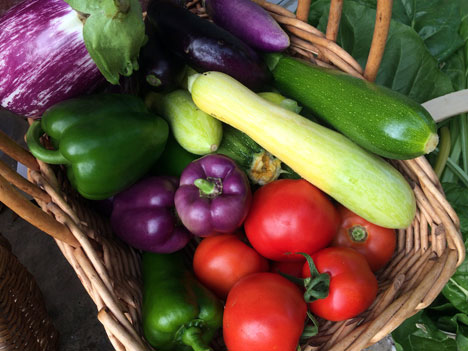 and yes there were greens and beans as always, but also so much more that i hadn’t planned on—so many eggplant they were dragging the plants over, squash (what else is new??), peppers, and yes, you are seeing right—those are red ripe tomatoes, finally!

and out of nowhere in fact; one day they were stubbornly green and the next there were a dozen red ones. and today there were more—go figure. 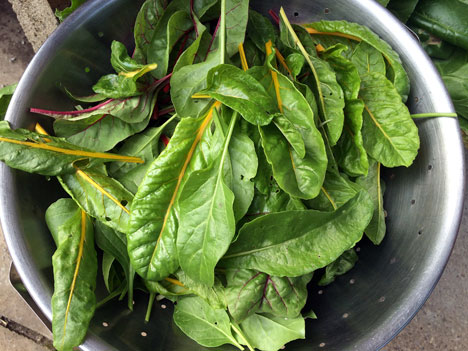 also another batch of tiny power greens—little leaves from around the bottoms of the collards and chard plants that are tender, tasty, and perfect for our salads. plus, they are free, as opposed to those salad mixes that come in the plastic boxes.

and just for good measure, the butternut squash report:

growing very fast now and the color is starting to change . . .

once back inside i got the fresh bunch of veggies cleaned and put away, but by then it was mid morning and time to get out for a run before the heat became a challenge.

still no knitting done, ACK! (that first photo was just a posed shot; it didn’t really happen, haha)
but i can show you my progress from the last few nights anyway.

my back piece is nearing completion as i have now passed the armhole bind off and begun the armscye shaping. 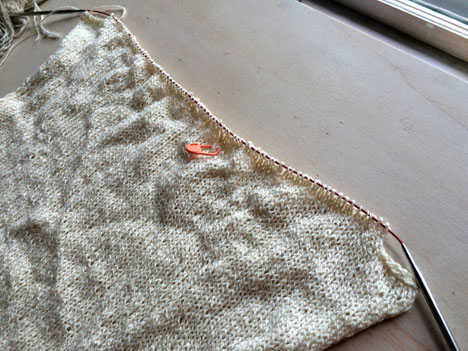 from here it will go very quickly; i cannot wait to get it done, sew up the shoulder seams and start the cowl neck. i am so looking forward to creating that feature! i have something special in mind and i just hope it works. it’s either that or something very traditional but very appealing.

you know, that’s something that always sort of haunts me—i often have two or even three design solutions to a particular part of a garment and it’s very difficult to narrow my choice to a decision. i marinate and marinate, wondering what knitters would like best—something jazzy and different, but maybe a little risky? something super appealing but seemingly not unusual? which to go with?

sometimes i can do both but sometimes it’s just too awkward to offer both. i wonder too if it’s really a good idea to water down the impact of one strong design by offering alternatives.

by the way, i know it seems like i am working through this garment at an unusually slow pace, but i also have another secret project on the needles that i’m motoring through at the moment. i cannot wait to unveil that but it will be some time before i can.

and there are other very worthy things that take me away from my knitting time—opportunities that i wouldn’t pass up for anything. like yesterday’s neighborhood block party—i love this event, held once each year in august at the park around the corner. this year i worked at the food table which is a great place to see and speak with nearly everyone who comes to the event. 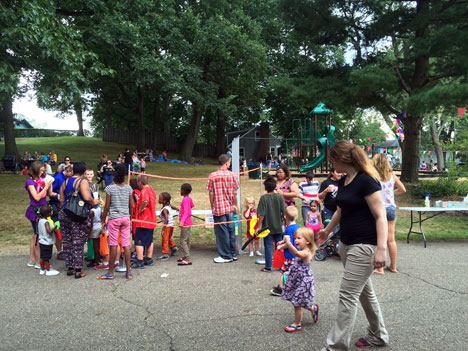 the food table was positioned right across from the balloon sculpture station, easily the most popular draw of the day. i got to see and talk to so many excited kids—and feed them sugar to fuel their happiness. hey—they weren’t coming home with me!

after the block party i went for a long bike ride with david; on the way back the sky was a symphony of the most beautiful blues—all sorts of soft aquas, ceruleans, and marine blues. what a sight—no photo since we were traveling at about 20 mph at the time, but wow; wish i could have captured that.

we didn’t finish supper til almost 11 pm but i really wanted to get the vegetables cooked if i could. i felt energetic so i got up form the table and started in while david cleaned up. 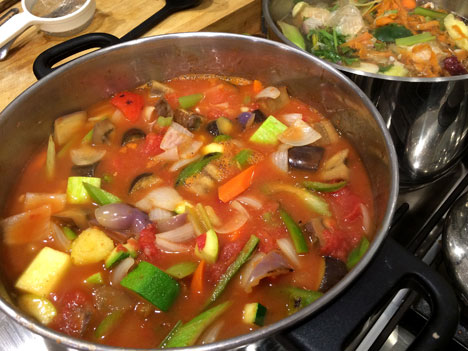 then he offered to help me and i took him up on it—wow, that really made the task go faster and before i knew it, we had a HUGE pot of ciambotta going. ciambotta is a lot like ratatouille, but also has celery, carrots, and potatoes in it and no wine. but the real truth is that these dishes are always made with whatever is on hand or fresh that day or how grandma made hers, so the recipe varies.

while i was at it i also put on a pot of vegetable stock from the last few days of gleanings (back burner, above). ends, stalks, peels and such all go into that; later i use it for soup, to cook rice and grains, or as cooking liquid in curries and sauces.

finally around 1 am, i shut off the gas and left everything to cool overnight while i got in a few rows and a TV show or two before bed.

when i got up this morning, i ladled all of it into cartons for the freezer and then headed out to garden to pick some basil before the sun got hot. 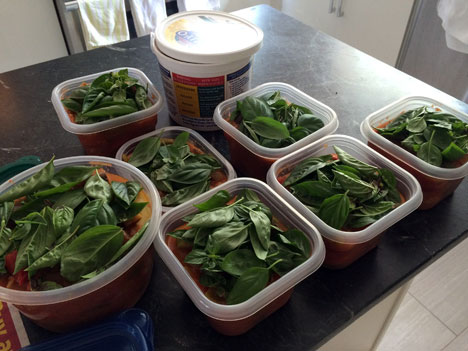 each carton got a topping of fresh picked basil leaves and a lid, then into the freezer so we can enjoy them after the garden is gone for the year. 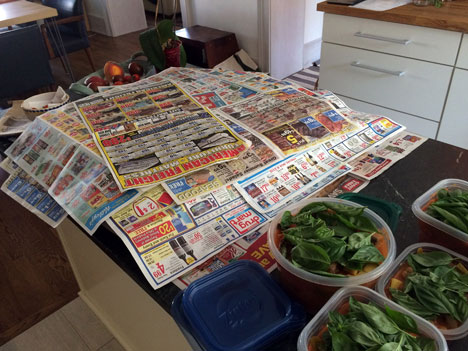 i’ve got one more chore to take care of but not today—sooner or later though, i have to face the what lies under those newspapers. 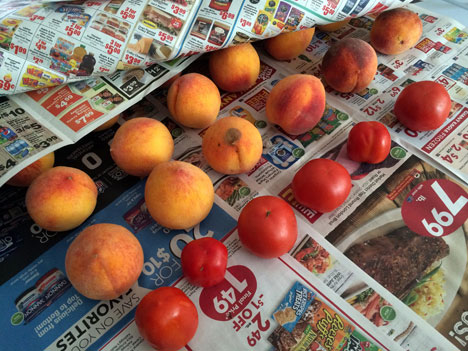 some tomatoes, yes, but even more importantly, a schlew of perfectly ripe peaches that won’t last forever. 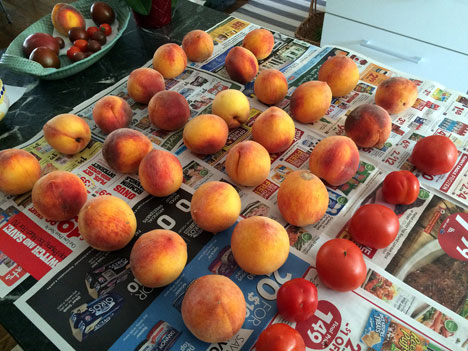 we’ve been enjoying them one or two at a time since barb brought them over last weekend; she was kind enough to pick me up a box on her way home from north carolina.

while i don’t really need to store any more frozen ones for winter (i have plenty), i could do that if i don’t find another use for them. however, the memory of last weekend’s peach pie is still strong on my mind and neither of us would object to a cobbler either. i find the luxury of having fresh peach baked good almost too appealing—why settle for frozen ones later if i can enjoy fresh ones now?

so i will have to find time for that in the coming days because they won’t hold forever . . . 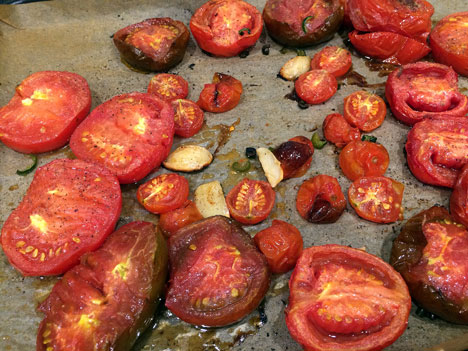 those ripe red tomatoes were burning a hole in my culinary imagination all day—i’ve waited a year to fast those first ones and i didn’t want to put it off any longer. so after this evenings bike ride, i fired up the oven and roasted them with a head of our fresh garlic and some minced hot pepper. 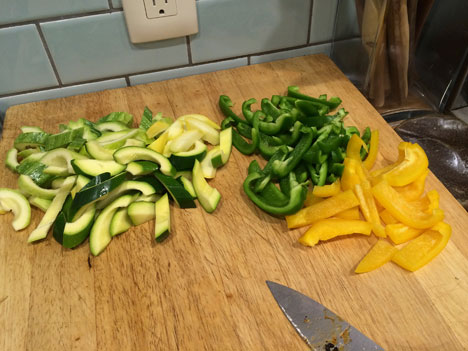 while the oven worked its magic on them, i chopped some squash, peppers, eggplant and onions, heated a skillet, and started browning everything with some anchovies. 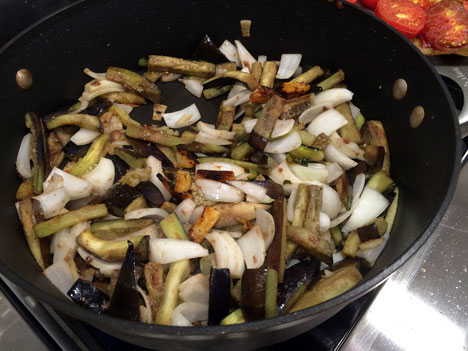 it was puttanesca time, baby.
the vegetables are not really a necessity in this dish but we like them and since the whole design of the recipe is to use whatever is in the cupboard, i’m going for it.

well, it was really REALLY good, but i was so hungry and excited by the time i plated it that i forgot to take a photo—maybe with the leftovers later this week, haha.

and now it is very late indeed on sunday night; time to quit this and go put my feet up to knit and watch TV. maybe an apple for a snack.

i will be back later this week with more; hopefully more as in more knitting.

11 thoughts on “sunday is rest day”