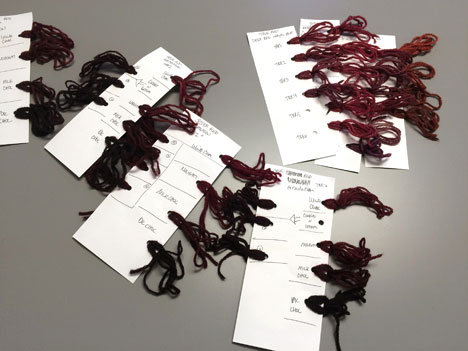 yesterday an important envelope of goodies arrived just in time to examine its contents at our weekly company meeting—red dye dips from our friend rita at yarn hollow, for our red scarf project. 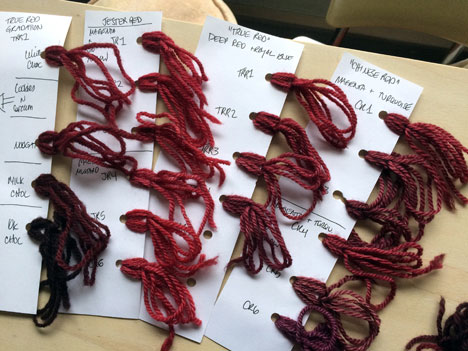 SO many beautiful reds! for each red, rita gave us a series of variations. it’s hard to see in the photos because the variations are quite subtle; probably in a swatch they would show up more.

we asked for a red that leaned a little toward blue this time, as festivus 1.0 was more orange in tone. some of the choices are more blue than others—similar to the crime scene colorway i used a few years ago from skeinny dipping.

the jester red (second from the left in the previous photo) is the one we’re most smitten with; it kind of falls in between those two and stands out from the other options with a bright glow, neither orangey nor purply, but a deep berry red. 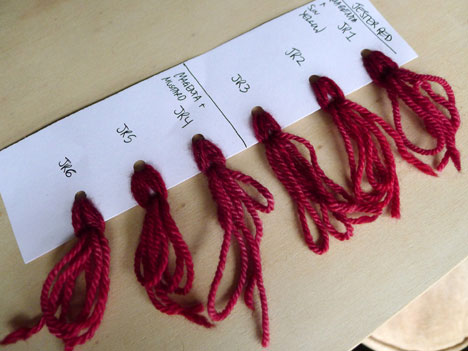 JR2 and JR5 are our favorites among all the jesters.

the color experiments were not dyed on our actual base, just something generic that rita had on hand. 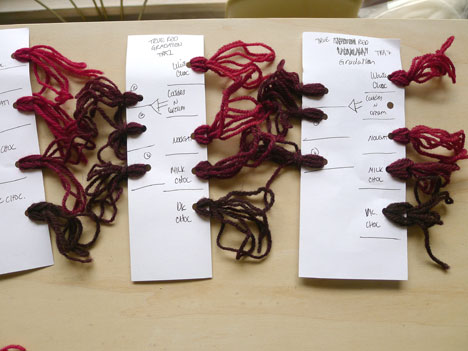 next, she picked the three colors she liked best and dyed up some sets on our confection sport base (100% corriedale), using the natural fiber shades to tone the single color into five gradients. 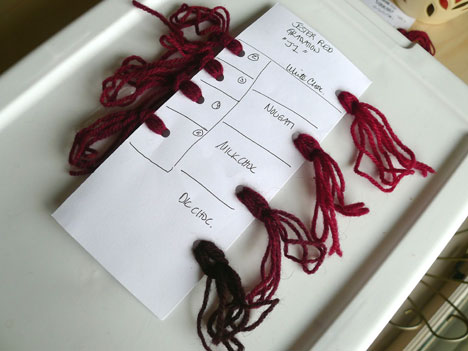 omigosh the yarn came out so soft! i was really worried about this as sometimes, a single breed yarn will not survive the dye process without getting roughed up a bit. but it performed like a champ—well, a soft-hearted champ . . . 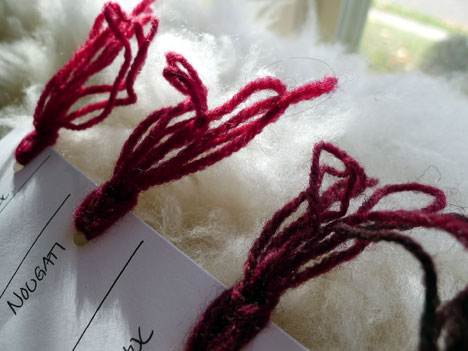 we were surprised at how the color changed on the corriedale fiber; it is slightly more blue and much richer with a gorgeous sheen; this fiber clearly absorbs dye well and very evenly. the yarn fairly glows with red light. 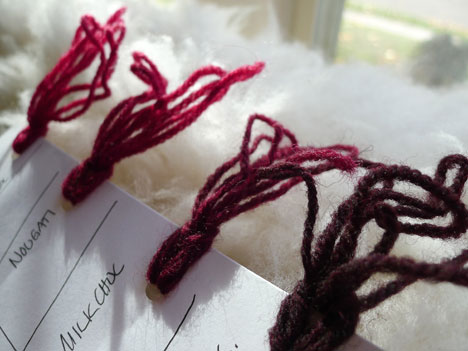 even the dark chocolate shade came out a beautiful, deep burnished red. two of the middle shades—nougat and cookies and cream—did not show much differential after dying, so we will eliminate one and go with sets of four (the red scarf design can also be knit in an array of neutral shades from any of our yarn lines).

erica has created a listing to preorder these red yarn kits, offered in a range of sizes that include from one to four ounces of each shade (pattern will be sold separately). the set of one-ounce skeins will make a nice cowl or hat, while the bigger sets will be enough for a scarf and hat or a wrap. skeins of confection sport range from 93.5 yards (one ounce) to 375 yards (four ounce).

we will donate 10 percent of the kit price to the scholarship fund. your preorders will help us decide how much yarn to have dyed; we don’t want to run short! 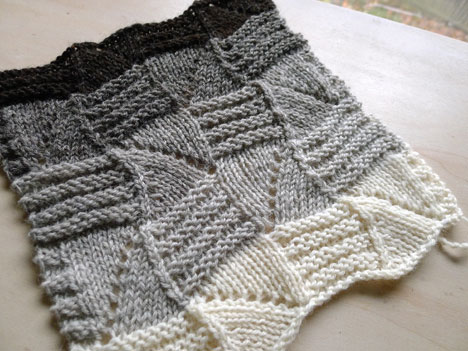 and while we will be knitting ours into variations of this year’s red scarf fundraiser pattern, you can use them for any project you’d like or give them to a friend—they make a wonderful swap gift! 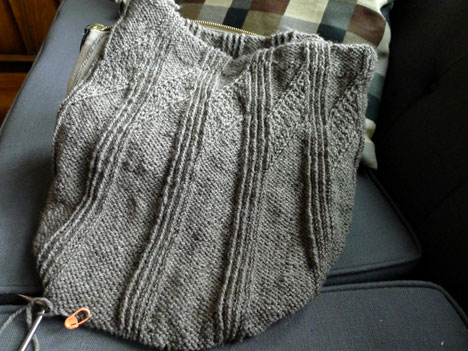 alright now, in other news, i had a bit of a setback on my skirt when i tried it on myself and my dress form over the weekend. 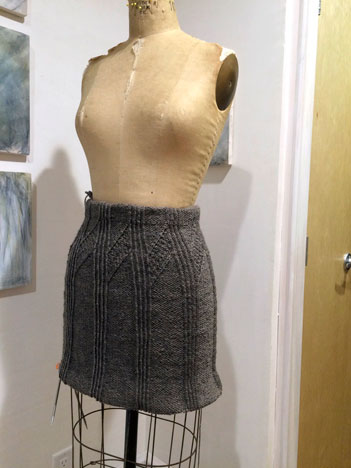 it looked nice and it fit, too, but drat—much too slim for the skirt i had in mind. with this fit, it was likely to end up bagging out if sat in for any length of time . . . 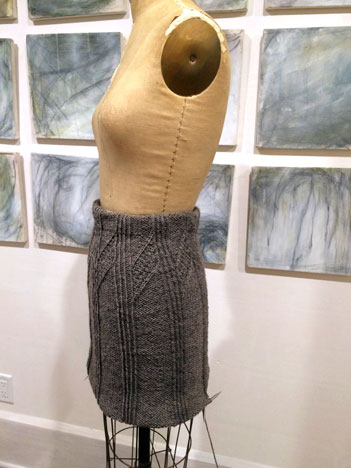 it wasn’t tight, mind you, but also didn’t have that nice A-line shape i was after; oh poo.

there just weren’t enough increases (i had been doing one per panel) and they were too far apart (cue in the sound of ripping out stitches). i took it all the way back to the end of the hip pattern. 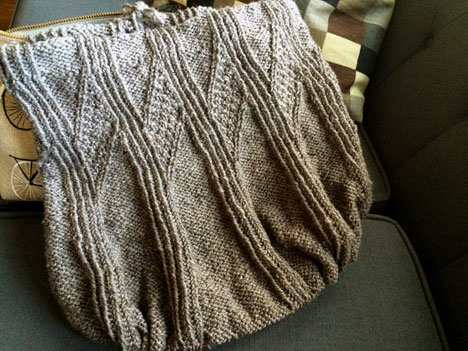 i worked hard to catch up and by last night i was back to the same point. i think you can even see on the needles that the panels flare a little more now. 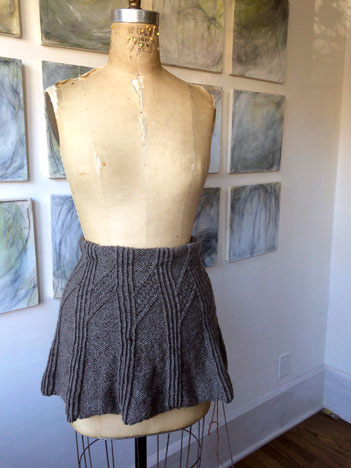 onto the form again on monday morning and i am much happier with it. in fact, i may just put a couple more rows between each increase when i write up the pattern, as it is just a little fuller than i intended. on the other hand, i do like the way it naturally pleats up with the motif, so i will make that decision after blocking. the hem looks a little stiff with the string through it, but that will drape better once the fabric is soaked and washed. 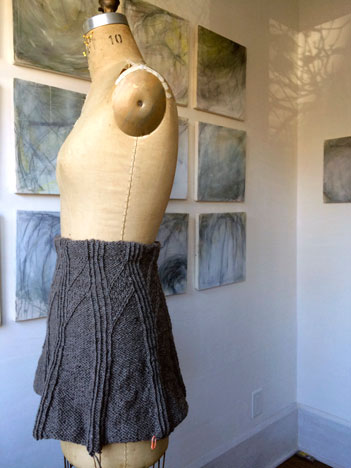 it’s still nicely fitted in the waist and high hip with a minimum of bulk, but below that point, it flares away from the body so that when we sit in it, it will not stretch the fabric. 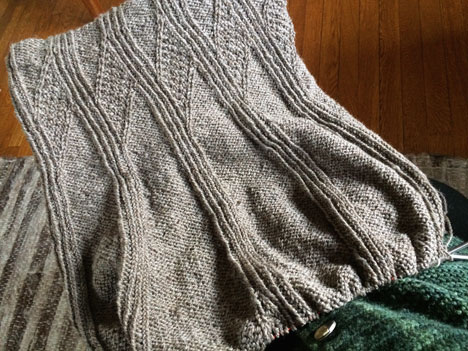 this morning i worked on it some more over coffee and got it to the point where the hem pattern begins. isn’t it sharp? i love how the kent DK works up—soft and squishy, at the same time it has such excellent stitch definition and a lovely sheen. 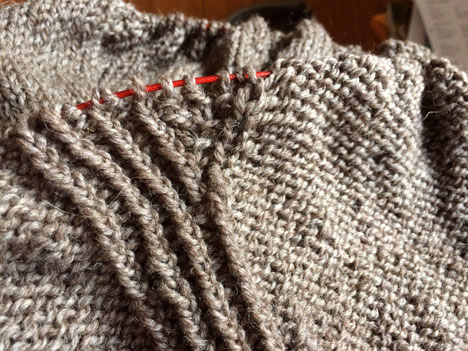 even though i really should have been at my desk working on some patterns, i couldn’t resist getting a few rows into the hem design. i’ll work on it some more at open knit night this evening and hopefully by tomorrow, i’ll be into the final stretch. 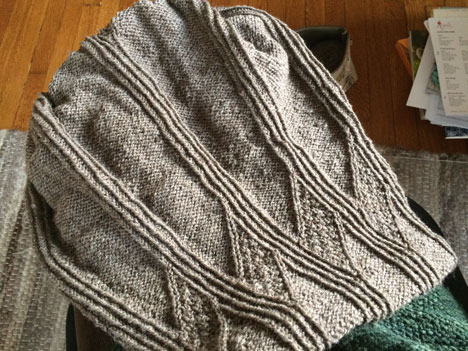 i desperately want to test drive it by wearing it for thanksgiving (especially since it’s supposed to get much colder by this time next week).

once the skirt is off the needles, i need to move right on to a couple of other projects. one of which is my red scarf sample, so i can get the pattern ready for a november 25th release (my sample knit probably won’t be done by then, but if figure we can all knit along together as we did last year). 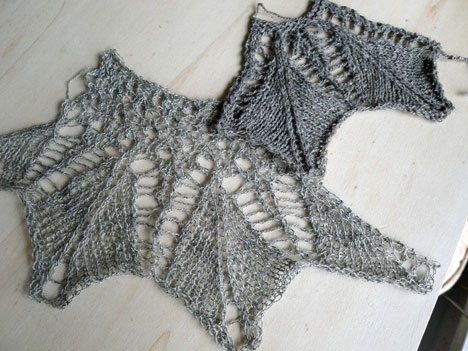 and second, a tantalizing new shawl design to be included in our january BNWs collection. more on that in the next post . . .

speaking of thanksgiving, i’ve promised to make a gluten free pumpkin pie and some bread, so i will be taking a little time to do that over the weekend. i’m getting excited about the holiday; david and i will be traveling to albany to visit my mom and the three of us will spend the holiday with family at their summer house on lake champlain in vermont.

ok, that’s all for now—i’ve got to skedaddle.