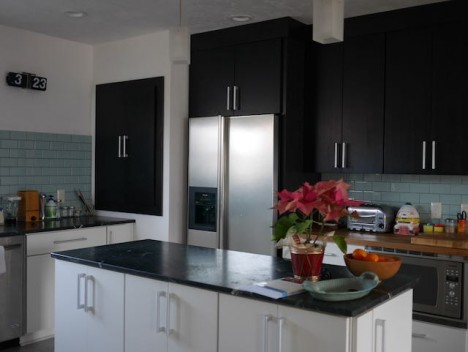 Alas, an opportunity to tell you about our big kitchen renovation, actually a bit more than just the kitchen. It incorporated several other rooms, namely the dining room, relocating our shared office and half of the central hallway (traditional colonial house). I’ve held steadfast not blogging until the  renovation was totally complete. Just this last fall some remaining electrical work was finished, nearly two years after general completion was heralded. Our good friend Bil (married us and has a rather brilliant life philosophy of helping people without asking or accepting compensation, would love to talk about this sometime), arranged and hung art, much of which had been in storage for over 10 years. I was somewhat dismayed by the cost of the renovation, yes I know this is par for the course, but 40% seems excessive. Then again some major items were not accounted for in the initial estimate, like not being able to salvage any of the existing wood flooring, opting to replace more windows and adding much needed closets (for coats and bicycles). Really enjoyed the interaction with the contractors, talking shop and about other projects they were working on, their work was, I want to say exceptional, but will say it was very good workmanship, did not see a lot short cuts taken. For instance, taking the time to use dowels for installing the trim, I dare say I would not have done (but will do so in the future), this dowelling will ensure that joints do not open up. The general contractor stopped checking in person about halfway thru the renovation, fortunately he had a competent and responsive supervisor. This can not be said for some of the sub-contractors, drywall and flooring finishers, both of which crews were boisterous and infectious, having little regard for the us the inhabits. We had employees working in the house at the time, making a tenuous situation even more so. Drywall installers managed to cover two outlets and a return, and several fastening issues, of which I addressed myself, and then there is the smoking. So when the sub-contractor came to mud an tape walls, I elected to send him home, I could see by his chosen materials that this would be inadequate, nor up to my standards, which far exceed traditional mud and taping. How unfortunate, I can pontificate on and on about the disagreeable aspects of this renovation, but in fairness, the good far exceeds the bad, bare with me a bit more. The floor finisher, boasted on several occasions that his work work truly exceptional, that I would be more than pleased with the finish. This was not to be, even Anne could see the poor workmanship, pooling of poly and dust encapsulated in poly as a result of not tacking (removing all remnants of dust) properly in between coats of poly. The new basement stair risers and treads finish was a disaster, blotchy staining – GC did offer to have flooring guy to return and correct, but I’m afraid I was so put off by the floor finish that I dismissed this idea altogether, will get around to doing it myself. There is more to say, will continue next week. Shall we have a look as some before and after photos. 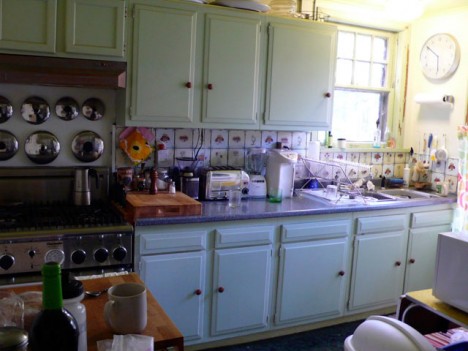 Before: Very old cabinetry that was coming undone, contact paper backsplash and vinyl flooring, again coming undone. Lived with this for over ten years. 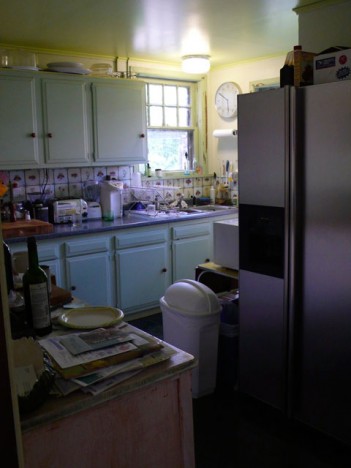 Before: A piece of furniture inherited from previous owner serving as an impromptu island. We had to replace the range and refrigerator immediately upon moving in 10 years ago, probably would have been wise to update during renovation, as their longevity is suspect. 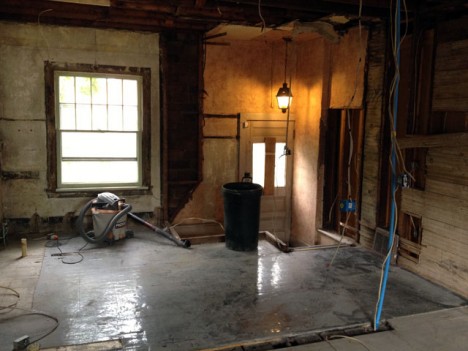 After: Demolition, here you can see old stairway to basement and back door. Stairway was re-configured and back door eliminated, allowing us to re-claim some much needed space in the kitchen. 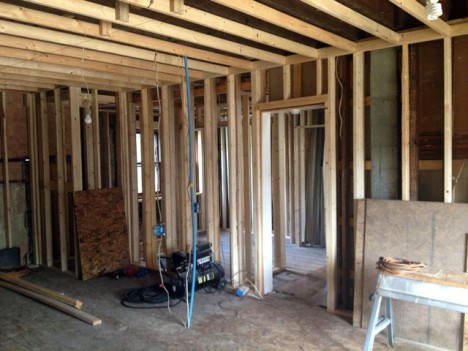 After: Re-building begins, this framing technique is rather clever, essentially re-framing in the existing framing. Allows one to even/true any unleveled ceiling/floors and provides an opportunity to insulate, although you do loose a little square footage. 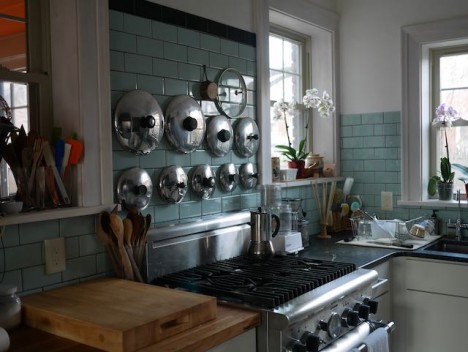 After: A proper backsplash, an additional window. The other two windows are the only original windows in the house that have been replaced, necessary here as one window needed to be shortened in height. We just had to incorporate Anne’s now famous lid display, she has used this brilliant means of storing pot lids ever since first apartment. 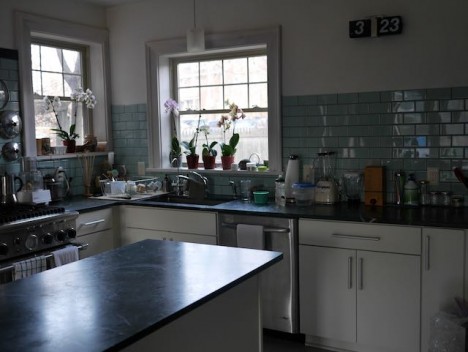 After: A much nicer larger island. The countertops are soapstone and oak butcher block, both are very forgiving and durable. Plus a dishwasher, although I find myself washing dishes by hand, and any number of pots, but I guess has it purpose. 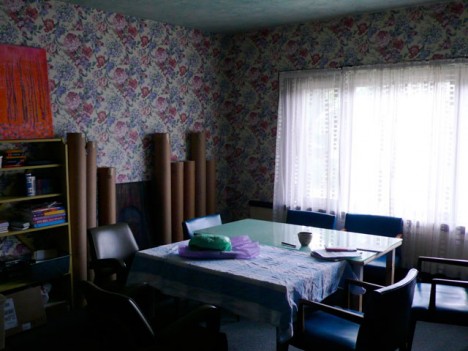 Before: Old dining room, repleat with wallpaper on ceiling and walls. The original double hung widows had been replaced long ago with these casement windows of which really compromised the exterior ascetics of the house. 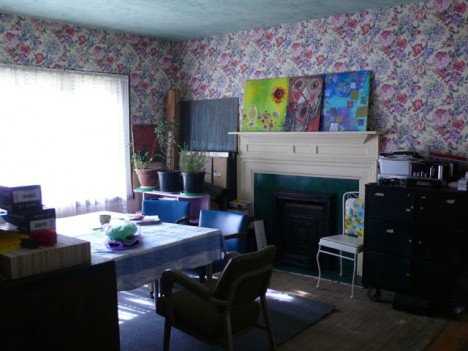 Before: The flooring was in really poor condition, several large badly patched areas and old affixed tile. The faux fireplace is just that. 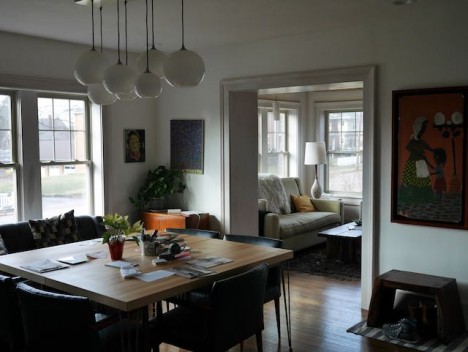 After: Unfortunately in this renovation we could not salvage much of anything. New double hung windows, not only very efficient, weather wise, but look the part as well, matching original windows quite nicely. Here you a glimpse of new sitting/living off the dining room (more about this next week). New oak flooring. All lighting is led based. 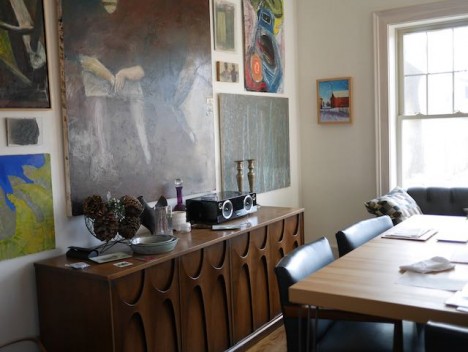 After: Some newly hung art, had dining chairs (purchased from local restore store) and sofa (gift from one of Anne’s former students) re-upholstered. The square table top is from Ikea and sits eight, the pin legs are from a local Ohio metal fabricator. Broyhill Brasilia credenza is vintage, required several coats of danish oil to restore it’s beauty, not a fan initially, but have come to really love this style.

Hope you enjoyed this post, would like to continue next week, as I have gone on a bit long here.

32 thoughts on “A Promise Fulfilled”