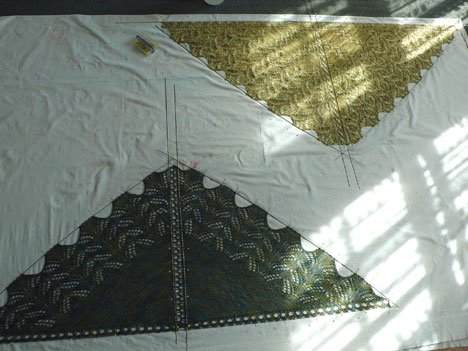 not the best opening shot i’ve had on the blog but it does tell the story of how busy the last couple of days have been. first, my living room floor was covered with sweaters laid out to dry. then i had two shawlettes off the needles that needed blocking.

so yesterday when i woke up, i folded up the sweaters, put them away, and set my just-finished the les abeilles scarf to soaking. when it was ready, i pulled it out and put the pea vines in for a bath while i blocked the first piece. 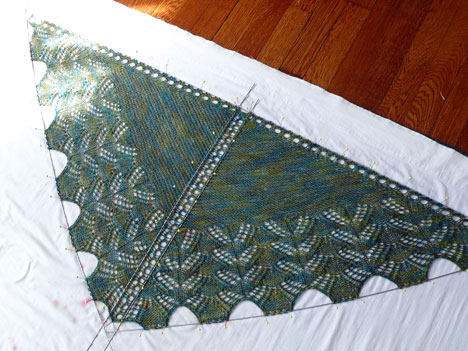 this one is knit up in briar rose grace, which is now sadly discontinued, but check out sea pearl as a great substitute.

once i had les abeilles pinned out, i got to work on the pea vines shawlette. this first prototype is actually a “between” size; when i saw the final result, i wrote the pattern so that the scarf size is a little smaller and the next size up is a little bigger—this one just seems a little big for a scarf. 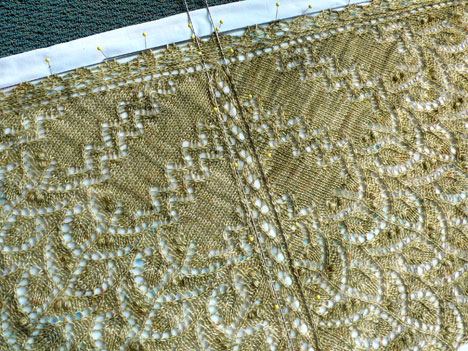 the stitch patterns are so much more striking when they’re fully opened up, aren’t they? the insert detail along the center back, defined by the decrease lines of the side panels is my favorite thing, something i obsessed over in the design. i pulled it from barbara walker 2; it’s the pattern that i used in my cloverleaf mitts pattern, shown here as a little panel of a single motif. 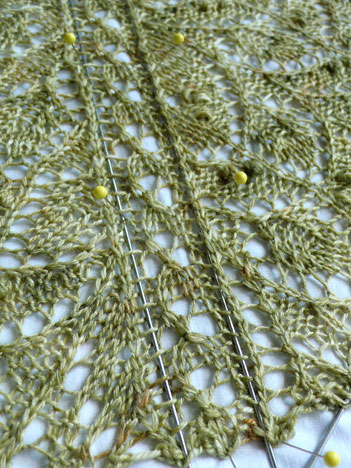 i always loved the curling shapes in this tiny eyelet pattern and was intent on working it into the pea vines design (i might not have such a perfect opportunity to use it again!). it means that the chart has to be pretty large (and the written instructions long), because matching the repeats of this panel and the main pattern takes sixty rows. but it’s worth it . . . and it doesn’t really make the knitting more difficult, despite the impact it has on the page count of the pattern. 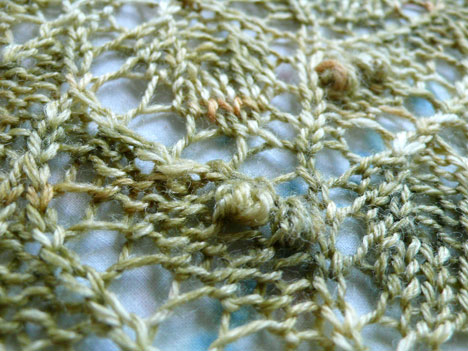 another nice effect of getting the piece stretched is that the nupps now stand proud of their “pods” on the surface of the fabric, thus achieving their final dimensional effect, even from a distance.

it really glows in the sunlight, doesn’t it? the woolen rabbit pandora was the perfect yarn choice for this pattern—it’s full-bodied hand provided beautiful stitch definition, while remaining soft and silky to the touch. the spring garden colorway—kim’s choice for me—was pure genius, with it’s mix of soft lettuce yellows and dashes of baby carrot, deepened here and there with a blush of celery or scallion green.

the whole thing worked up to be just the profusion of garden tangles that i hoped it would be—so prettily disorganized, the way nature should be . . . let’s take a look 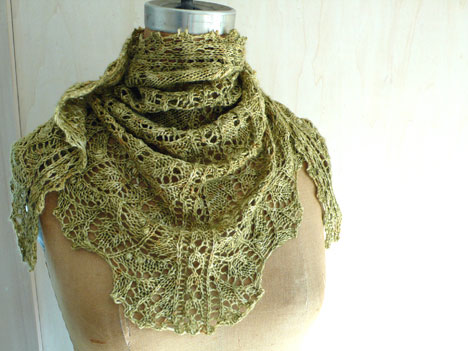 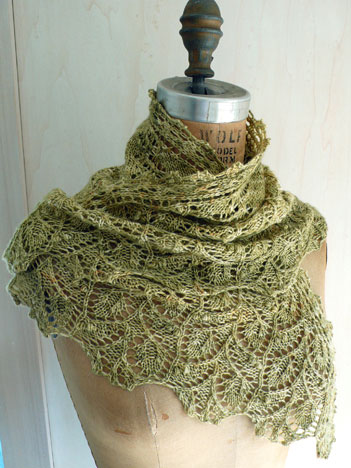 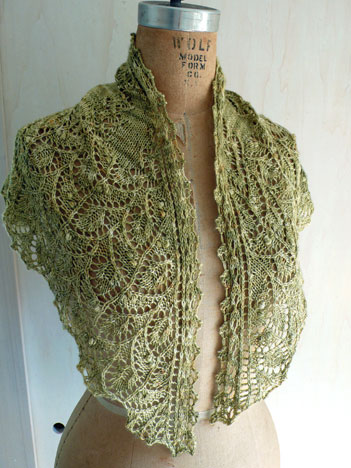 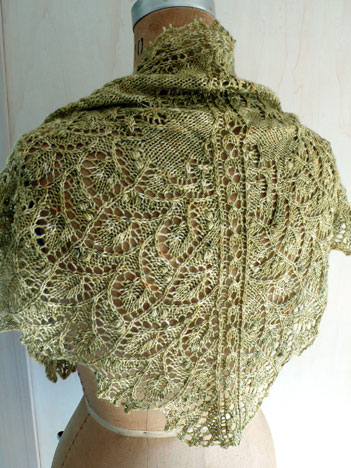 we’ve been discussing how we should photograph it—we’re toying with the idea of taking it to the farmer’s market on saturday for some shopping.

then its sister had a turn on the mannequin 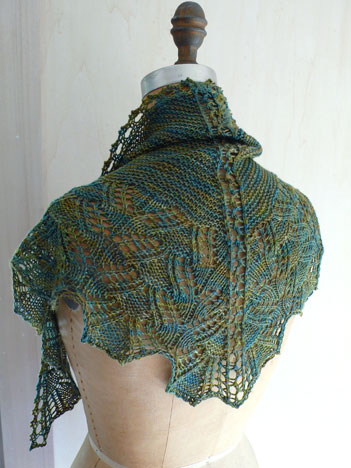 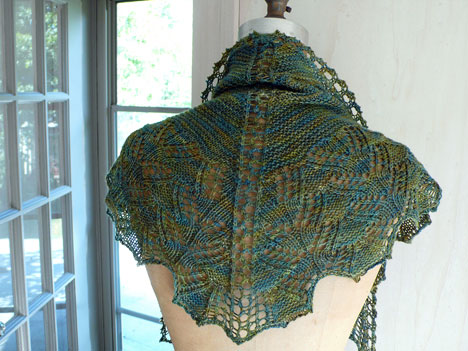 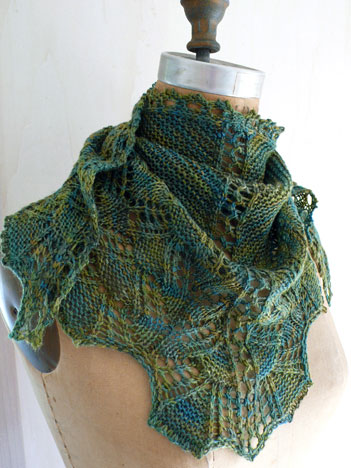 sigh. isn’t it nice to have finished some things? i really enjoy the feeling . . .

i also enjoy the feeling of having some needles freed up so i can finish some more things—like the rosebuddie blanket, waiting patiently for me to pick it up again. 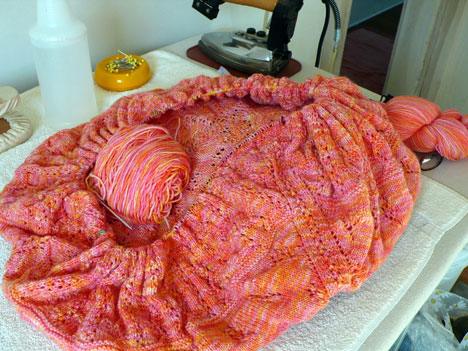 which happened last night—i worked on it for several hours while we watched TV and now i’m really and truly within reach of finishing the body. three rounds left to go. 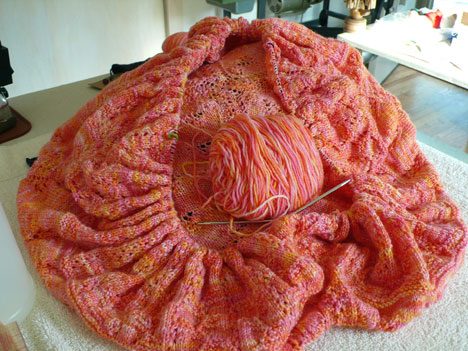 of course, then there is the edging to do after that, but watching it come off the needles is a big incentive to work through that part quickly (or as quickly as i can through 1740 rows of it, haha).

anyway, it was really good to get reacquainted with this project and this gorgeous MCN luxury yarn from fearless fibers (wowie, deb has some awesome colorways up right now; i’m working with chastity). it was good to have something substantial on my lap as i worked, reminding me that i actually knit all those stitches individually by hand—i made this, big pink blob that it is, hee-hee!
ahem, i think you know what i mean . . .

i spent a good part of the last two days working on the pea vines pattern and i’m happy to report it is now with the test knitters. i even wrote up the stole version and am putting the final touches on that as soon as i’m done here. busy, busy . . .

when i got back from austin, i still had some finishing work to do on my secret project, so i’ve been squaring that away, too; just a little bit more to go. but little enough that i allowed myself a couple of nights of “goof-off knitting”—that is, work on projects that are not as pressing, but which i have a strong desire to touch and knit because of the the novelty factor (i don’t think i’m alone in my enjoyment of variety).

for instance, last night i could have completed my finishing work by spending the whole evening on it, but after i’d worked for two hours, i was at a good stopping point, so i folded it up, set it aside, and switched gears. 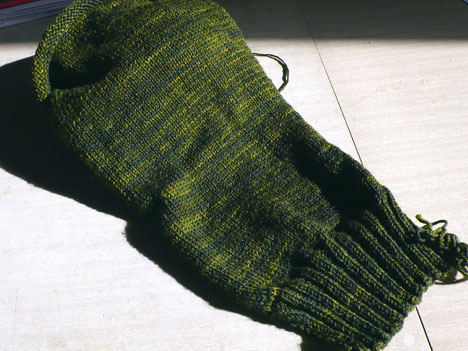 and now, i’m almost to the underarm on the sleeve of my new vintage shirt. i loooove the fabric—thinner and softer than any other sweater i’ve knit lately, it will feel lovely against the skin (the sunna yarn’s silk and cashmere content are the insurance for it). i told myself that by the time i finished this sleeve, i will have decided about the style for the fronts, and i’m almost 100% convinced it should be a henley (rather than a cardigan). when i weigh the sex appeal of one against the other, the placket front wins. and i think this style does need some sexiness built in as a counterpoint to the masculine shirt style that inspires the design.

the remaining questions are how close a fit do i want for mine (i’m currently thinking classic fit, with two inches of ease) and what buttons should i use. i keep forgetting to take the sleeve upstairs to hunt for a set of buttons that will work. i might have some some shell buttons that go; i can’t remember. i do know i want something that looks vintage, not too ornate.

now that i’ve got a really good reading on my stockinette gauge, i need to make a few adjustments to the first draft of my pattern. then i can start the front, which is fancy part. or maybe i’ll do the other sleeve and save the patterned part for the middle of the project . . .

i’ve got some more garden stuff to show you, but i’ve run on long enough and i think you’d be happier if i actually got some work done today too. so, i’ll hold that thought for now and try to squeeze in a post tomorrow. but if you just can’t wait, check out this wonderful flash your garden! thread that karolyn started in the knitspot ravelry group—it’s an entertainment winner. 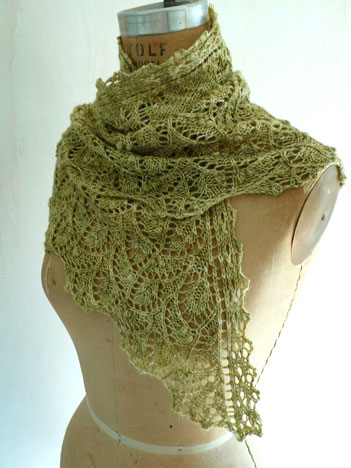 34 thoughts on “two pretty to pass up”