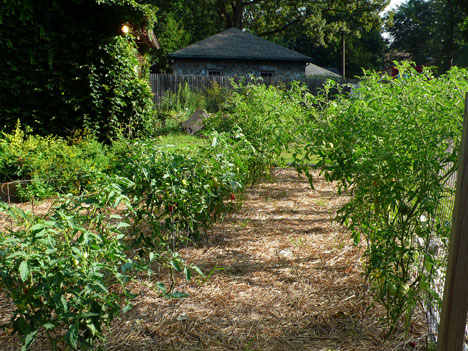 i think of this view in my garden as “tomato alley”. i can’t help but admire the plants for getting through the summer in such good shape; they are really holding their own against the usual suspects this year. as the end of the summer approaches, they continue to grow and produce lots, despite the awfully dry weather we’ve been having.

less than a month ago, before i left for knit nation, i took this photo from the second floor porch on a wet, rather gray morning. 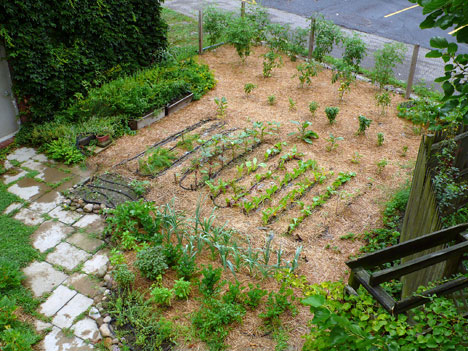 i wanted to get an aerial view of the garden layout to remember for next year where i put everything (so as to rotate it sensibly next summer).

yesterday i took another, just to see how things have evolved over the last four weeks 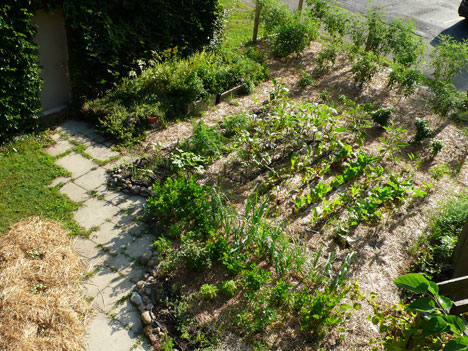 wow, lots more dry and lots bigger. the angle of the sun is also different now; fall i approaching and the sun has moved to the right (or, well, the sun is where it always is, but we have moved to the left, i guess). sigh . . . 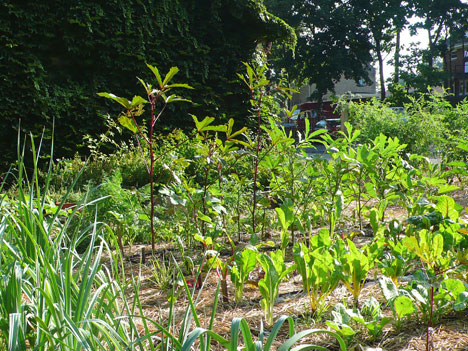 those very tall plants in the middle are okra—i can’t get over how big they get; some of them are as tall as i am now. 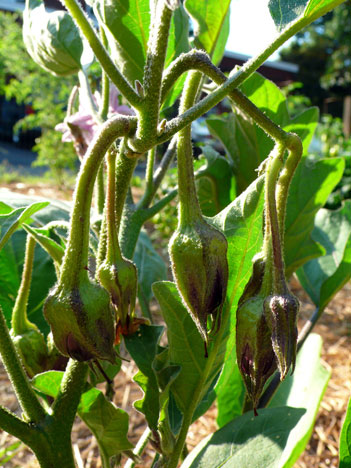 there’s not as much work to do out there as there was earlier in the summer; the weeds are very much under control, now that the plants are big enough to throw a lot of shade underneath. just a few to pull here and there.

i replanted a few new things to fill in spaces left by plants that are done—some squash plants and a new row of beets, which i planted in the space where the green beans didn’t germinate (again). i just wanted to see if the problem lay in the seeds or in the ground. 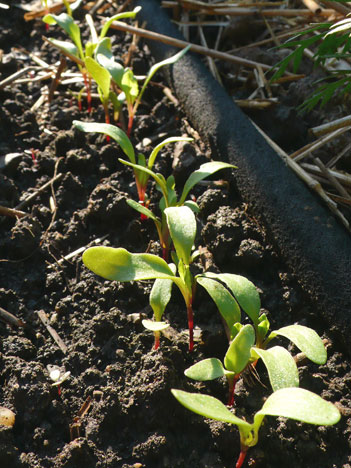 must’ve been the seeds. all the ones i bought from that company (okra, green beans, chard) were just so-so and required re-seeding; low germination from all of them. next time, i’ll stick with suppliers i’ve had better success with.

i did my last pruning a week ago and i don’t think i’ll need to do it again, unless those costolutos need one more haircut (very possible; they’ve been pretty high-maintenance). 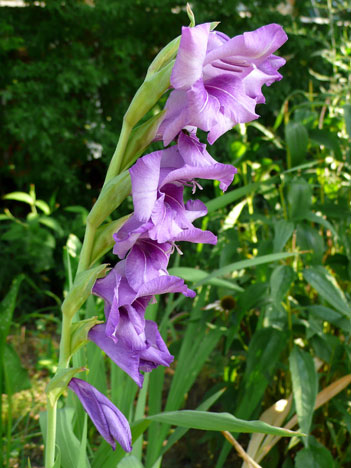 i almost missed the entire blooming period of our gladiolas, which david planted for the first time this year. i noticed that we had them coming in before i left for london and by the time i returned there was just this one left (pout). these are an old-time favorite that reminds me of childhood; my mom planted them each year in her flower beds at home.

of course, less work to do out in the dirt does not mean we can sit back and put our feet up—there is plenty of garden-related work this time of the year.

every day or two i bring in a haul of stuff that requires washing, sorting, ripening, cooking, and processing, so that we have a full freezer by the time the frost hits (and many enjoyable meals of fresh food in between now and then). 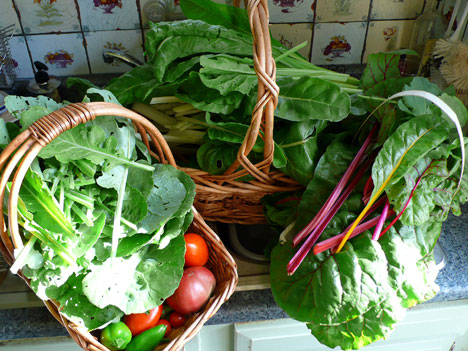 on weekday mornings, i do the easiest of these chores, so that i can be at my desk at a reasonably early hour. i can do tomatoes three or four times a week by spending about 30-60 minutes on them before work. then on saturday, i take on the longer tasks, such as picking, cleaning, and blanching batches of greens for freezing, and cooking up dishes that will freeze well or ones that we can reheat during the week for dinner.

today was one of those days—i spent six hours in the kitchen, but i got a LOT done. one of those times when i turn off my planning brain and just do. 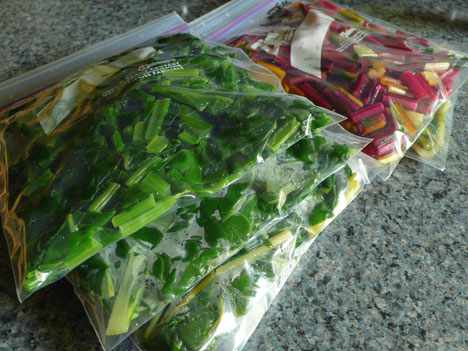 six bags of greens to add to the stockpile (i separate the leaves and stems for different uses). then i put on a big pot of tomatoes for puree and ended up with five containers to freeze 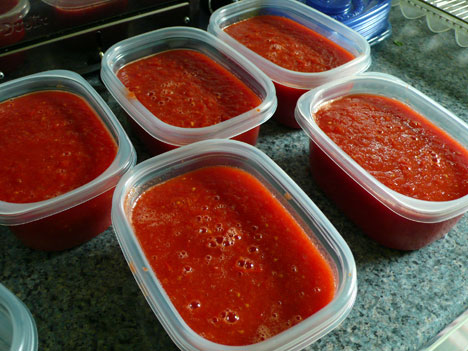 i think i have a total of 20 or so put away now; i’ll just need a few more. once i have what i need, i’ll focus on making roasted tomato paste. then, if the tomatoes are still coming in fast and furious, i’m thinking of making homemade ketchup. i’ve always wanted to try it and i think i have a recipe somewhere—we have a hard time finding a bottled variety we like, so i may as well make some and see if i can do better.

after the tomatoes were cooking, i put together some foods for our week and to store in the freezer for later in the fall. 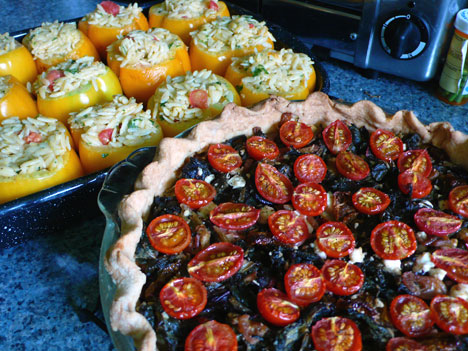 remember beckie’s super-easy spinach pie we all went ga-ga over a couple of years back??
(if you weren’t with us then, you gotta check it out—BEST 5-minute recipe ever)

well, we hadn’t had it in a while and since we have all these greens, i thought it would be a good time to make it. i had a piecrust in the freezer and it just so happened that i found myself in the greek grocery yesterday, where i picked up some good imported feta. it was a no-brainer. 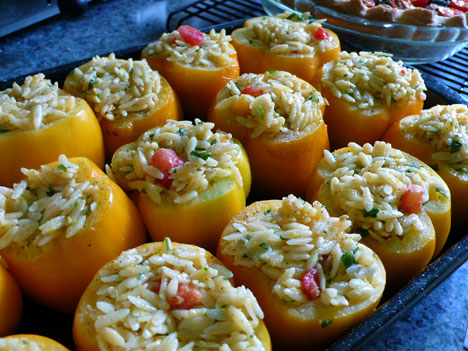 and then i thought i’d use up the pile of yellow stuffer tomatoes i had lying around. i don’t make stuffed tomatoes much (i can’t even remember the last time i did), but the idea appealed to me as something i could fix and freeze, then use a few at a time as a side dish. i just used orzo, cheeses, parsley, and chopped tomato, but any combination would work nicely. these might be the perfect thing with fish or with a few other vegetable dishes for a light supper. 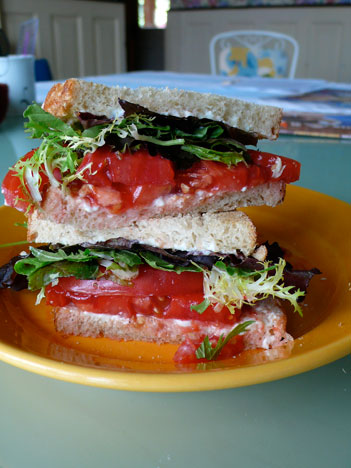 by this time, it was 3 pm and i was sick of the kitchen—i like the feeling of having done all that, but i’m no martha stewart; i’m happy to get off my feet after a day of cooking to do something different. a bite to eat and a shower sounded awfully good.

there’s always time for knitting, too, right?? of course there is!
i finished my secret project completely now and i feel grandly optimistic about all the great new projects i’m now free to explore. heh. but i’m trying to be realistic . . .

i haven’t forgotten that i still have lots of edging rows to go on the rosebuddie blanket. and the heat was stifling again last night, so i didn’t make any headway on it. maybe tonight—after a steady evening rain, the air has cooled down nicely and hopefully the upper floors, where we watch TV are chilling a bit as well. 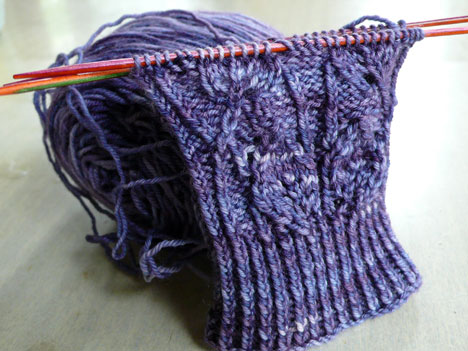 not that i wasted any time—i figured it was a good opportunity to get back to those mitts i started in london. i’m using the same motif i used for the bougainvillea socks, this time in a gorgeous deep lavender from dye dreams (sadly, no longer in business). i know it’s a color my niece will be crazy about.

i also finished the first sleeve of my vintage shirt last night and cast on right away the second sleeve. 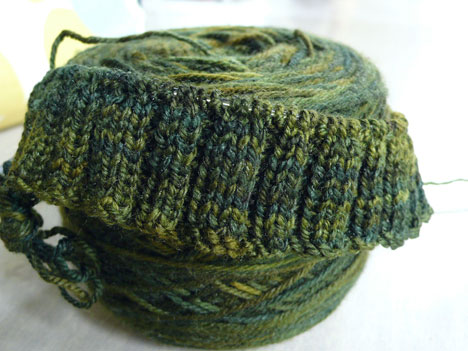 i’m anxious to start the patterns front of the sweater, but i also know that it’s a good idea to sandwich that piece halfway through—there is a lot of stockinette in this garment and i know plain knitting doesn’t hold my attention as strongly. holding the patterned part back as a carrot for myself isn’t a bad idea.

david’s been busy too—he put an extra-big effort into my workroom this month while i was away and now it’s done. and it’s beautiful; i can’t believe it’s the same room. 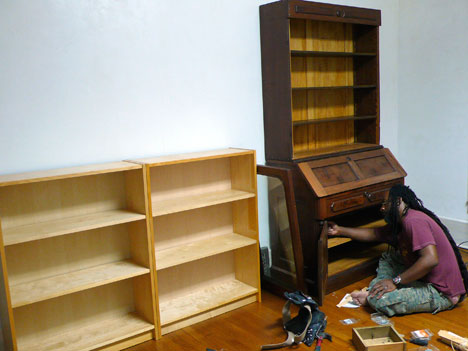 he’s moved in the big furniture and is putting together my dad’s old desk (which he refinished for me a while back as a christmas gift). i can’t believe he carried it up the stairs by himself—it’s old and very heavy. 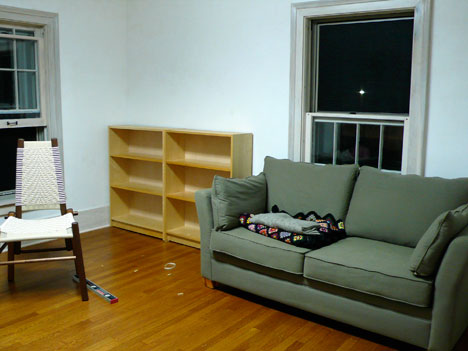 this is the part of my workroom where i’ll actually knit and work the most, so i’ve been very much looking forward to this day. comfortable seating, books, desk, and spinning wheels will all go in here. the storage and machinery area is in the small back room david finished in december.

when we tear up the living room for its makeover (very soon), i’ll have a cozy, quiet, out-of-the way place to knit and work. and finally, a permanent place to spin.
more photos when it’s all settled and we have some lovely daylight glow . . .

36 thoughts on “food for thought”