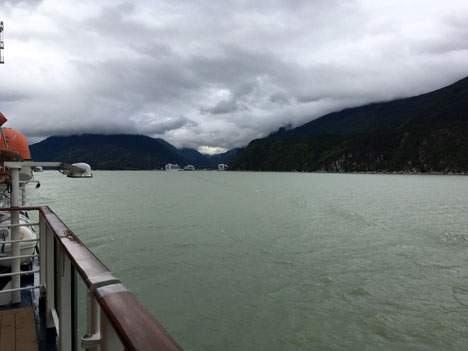 there were two more stops on our alaska journey—the first was skagway, our northernmost port. it was a really dreary day when we pulled in but i was excited because we had plans to meet up with kim3’s son rex, who is working there for the summer. we had set a time and place to meet during his lunch break and to kill some time beforehand, barb and i strolled around the main drag which was filled with tourist traffic. 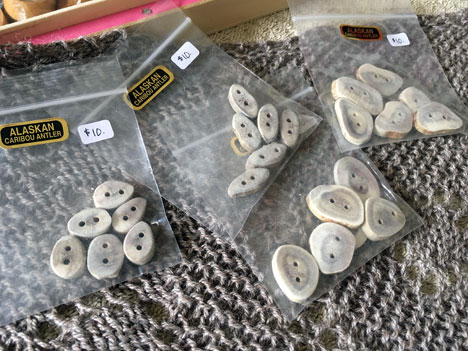 but we found a tiny gallery to duck into out of the fray and discovered a cache of buttons and other objects made from caribou antlers. i was excited to see a couple of sets of small ones, which i tend to use a lot; it’s unusual to find antler buttons in this size. a few sets of buttons later and a few more gifts taken care of, we headed over to the corner to meet rex. 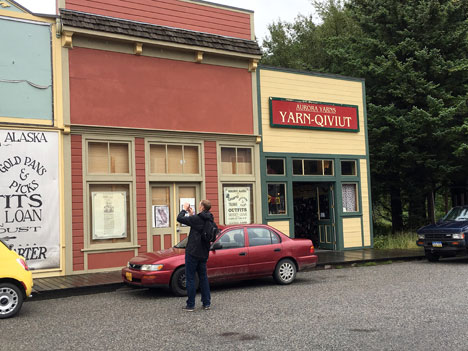 when we got there we laughed out loud and complimented him on his wily assessment of our main interest in the region. we amused ourselves at aurora yarns until he was free to leave work and had a nice chat with jean, who works there and gave us a tour of their hand-dyed quiviuk options. 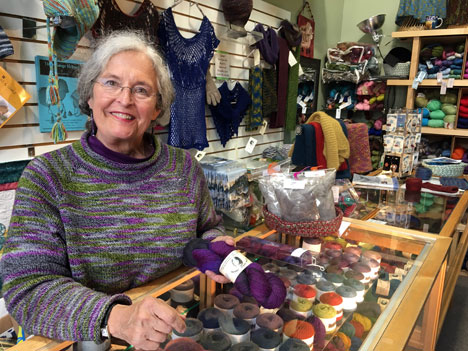 jean lives in minnesota during the winter and remembered taking a class from me a couple of years ago during yarn over; what a coincidence, haha. the shop is teeny tiny, but has a lovely selection of hand-dyed yarns, including quiviuk and quiviuk blends. 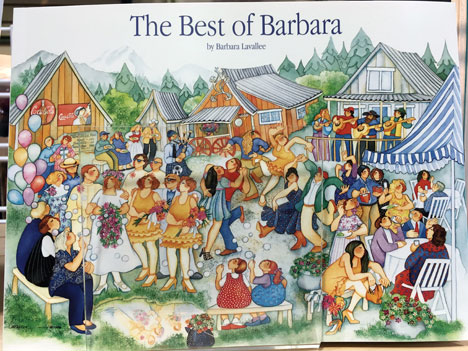 they also have plenty of other knitting supplies that traveling knitters end up needing (someone whose initials are BARB would consider this a must, haha). she found a beautiful set of large antler buttons with a green-tinged circle in the middle that will be perfect on the oculus coat she is knitting in chebris worsted. 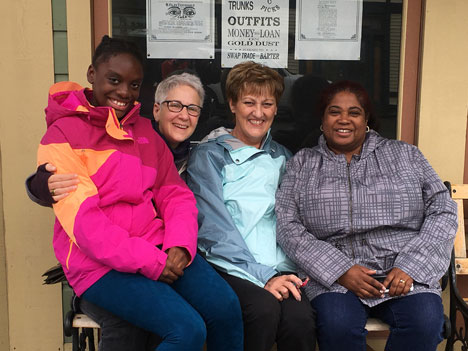 while sitting on a bench to wait for rex, we flagged down our ship mates rene and alajah, who were looking around onshore as well—a good opportunity for a photo. rene organized our tour and traveled with her family; alajah is a new knitter but working on it and we enjoyed the times she joined us in the classroom. 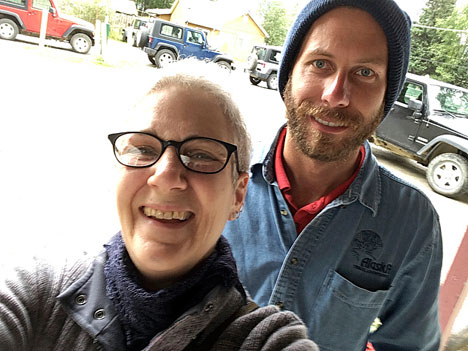 then suddenly rex was there; i like this quick selfie i took for kim.

and sitting here sweltering at home, i can hardly look at myself bundled up in a jacket and scarf! but it was definitely chilly enough that day . . . 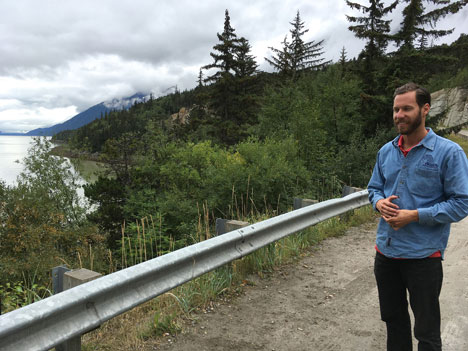 rex drives jeep and hummer tours up through the mountains, woods, and into the yukon north of skagway. while he didn’t have a lot of time between gigs that day, his boss graciously lent him a vehicle to drive us up to an overlook above town where we could get a better feel for the woods that ring the harbor and the scenery below, sans humans. 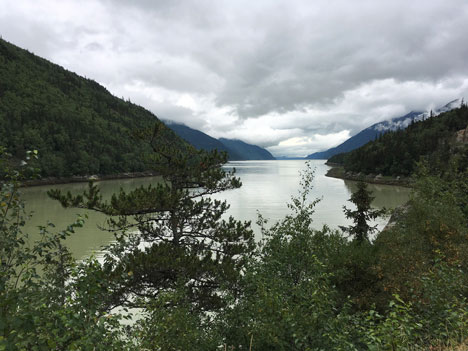 once i saw what was up there (and all the cyclists going up and down the mountains), i wished i had more time to spend onshore. i would have LOVED to go biking during our trip. 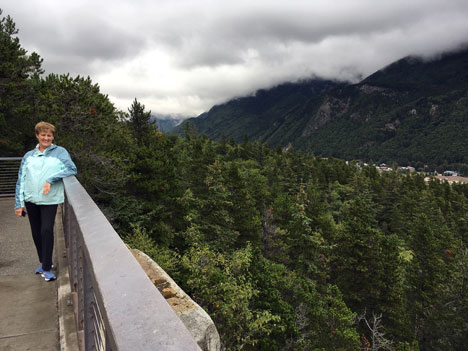 isn’t the color palette just incredible? who cares if it was rainy—in such unspoiled environments, all weather reveals a beautiful side. 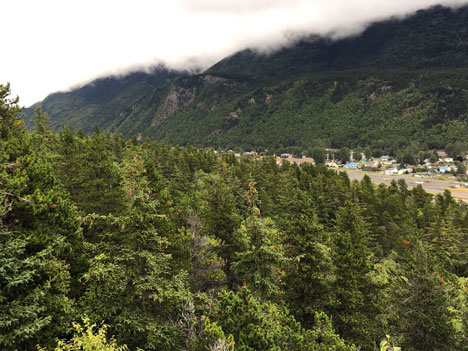 seeing layers and layers of all different greens and green-blues makes me wonder how anyone can not want to keep it just the way it is. but that’s me; i know everyone doesn’t have the same feelings. 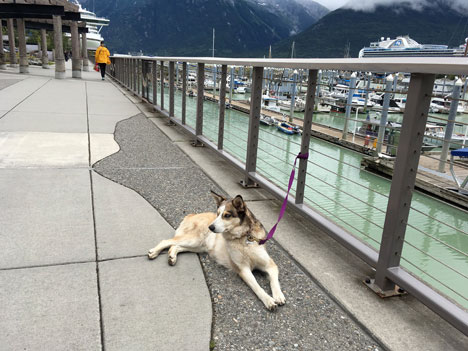 after rex went on to his afternoon schedule of tours, we headed back to the boat; we were both ready for some knitting. on the way we met this beautiful alaskan dog with those eerie pale eyes, who couldn’t care less about us, haha.

with a day and a half at sea ahead of us before hitting our last port, our knitting group had some nice long stretches of time with which to establish themselves further in their bee shawl projects and to do a few more skill-based exercises. over the next two days, we practiced a knitted-on edging, talk about various kinds of lace fabric and yarn, and how different types of laceweight yarn will produce different results in the final fabric.

we had a blocking session scheduled for the last day and with that in mind, barb was intent on finishing her club project, the frisée triangle so she could block it in class. 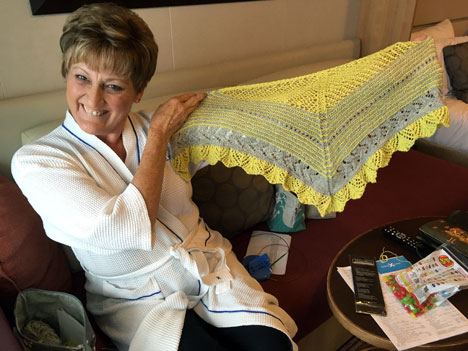 she pulled it out, completing the graft just before dinner on thursday evening. 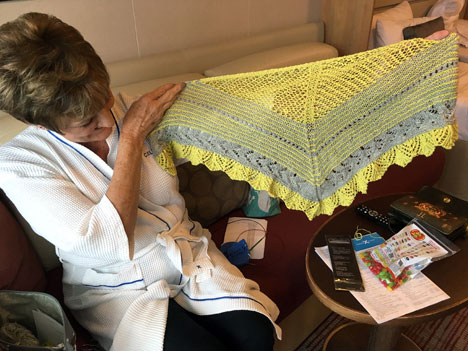 she was pretty proud of it and rightly so—it looked great! barb made a pattern change (because you can!) and knit the entire upper shoulder area in the mesh pattern, which i liked a lot.

you might have noticed from that photo that as we sailed south, the weather grew considerably brighter—we were even able to go out on deck without jackets on. by the time we woke up the next day, the sun was shining brilliantly into our room—something we hadn’t seen in a week and i almost didn’t recognize it.

the next day we all pitched in to pin out the shawl; it’s always amazing how much a wet piece of lace can be stretched and how it transforms the fabric, opening up the motifs so they are completely new to the eye. the hem pattern alone grows to at least twice its unblocked size. 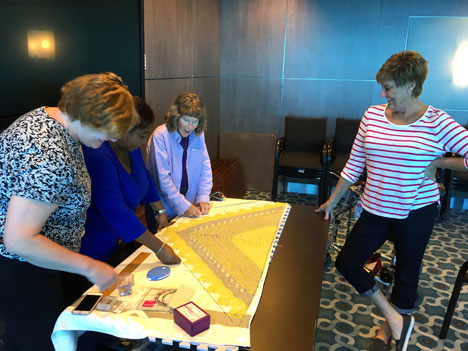 barb stood over it, not working, but making sure everyone else was doing it right, haha! 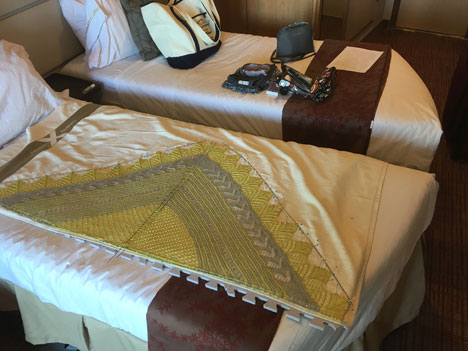 this was a half day of class because that afternoon we were due to dock in victoria, BC for a visit. we took the wet shawl back to our room, still pinned to the blocking squares; kind of like a flat stanley, haha. it survived the trip beautifully and we set it out on the deck to dry for a while, then laid it on while we went ashore. barb wanted to be sure the shawl was ready to wear to dinner that evening. 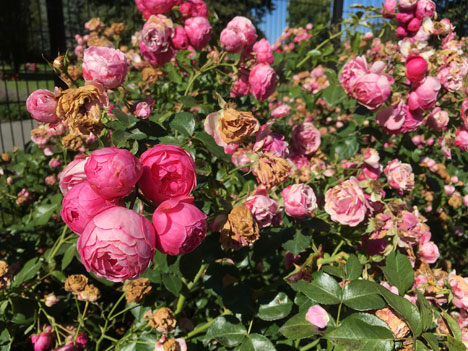 victoria was sunny, warm, a city of cool neighborhoods that were perfect for walking—which we needed after being at sea for two days. 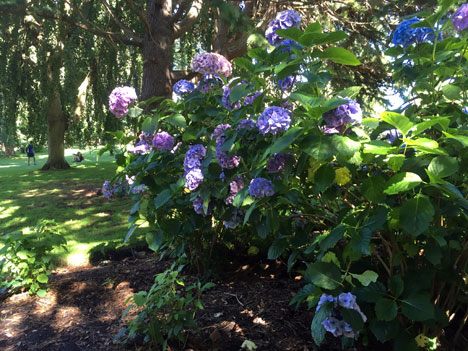 we walked several miles along the bay road to the beacon hill park, where we enjoyed strolling through the gardens for an hour or so before heading downtown. 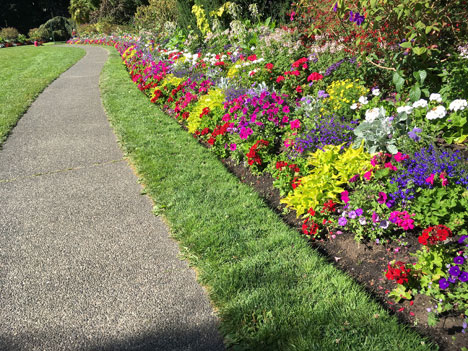 victoria is called the city of flowers and when you are there, it’s easy to see why. the temperate climate and humidity make it a good environment for happy plants. 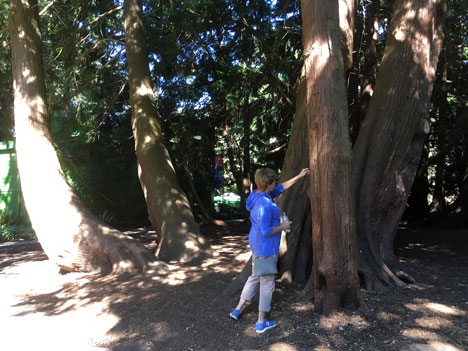 as well as trees—these sequoias were fascinating to us because they don’t grow anywhere near where we live. it wasn’t the buchart gardens, but we still saw plenty of plant and tree specimens that were novel to us and at the same time, surrounded by lots of people having fun in the sun; it was a good choice for an self-guided excursion. 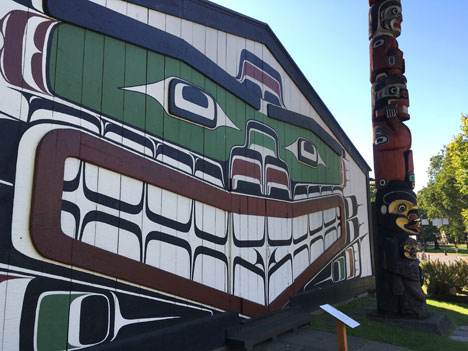 after the park we headed toward the busier part of town and found ourselves suddenly on the grounds of the royal british columbia museum. 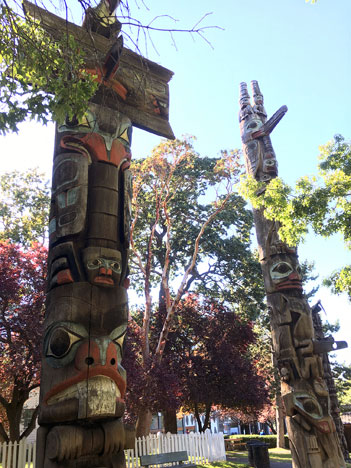 unfortunately it had just closed when we arrived, but we were delighted by the forest of totems interspersed with the trees throughout the grounds, part of the first peoples collections held by the museum. 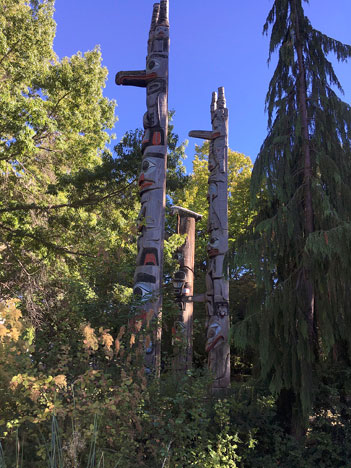 it was worth every step of our seven-mile walk that afternoon! 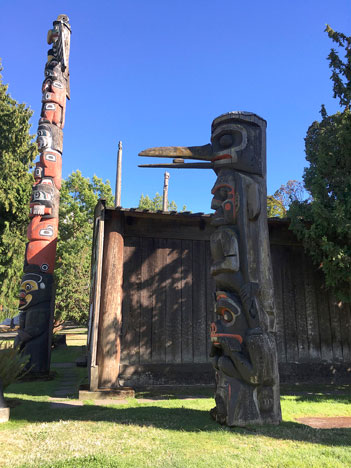 we wandered about for a while, taking them in from every perspective, a little sorry to have missed whatever treasures were inside. they were really awesome as a group , the kind of siting that made us feel like it couldn’t be topped. after that, the rest of downtown sort of paled by comparison, having become busy with rush hour traffic. so we made our way back to the boat for a shower and an early dinner. 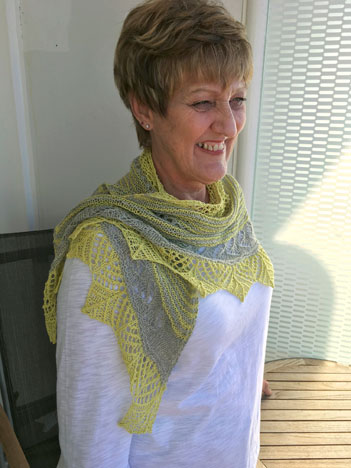 back in our room, the shawl was dry and barb consented to a few modeling shots—lovely, isn’t it? just the thing to wear to the dining room, where the A/C can be a little too direct.

with our bags all packed and waiting to be picked up for our morning departure, we spent our last evening lounging in our cabin, knitting and watching a movie. it’s always really nice to travel with a friend you feel so comfortable with;  after a week in close quarters, we were still laughing and having fun. 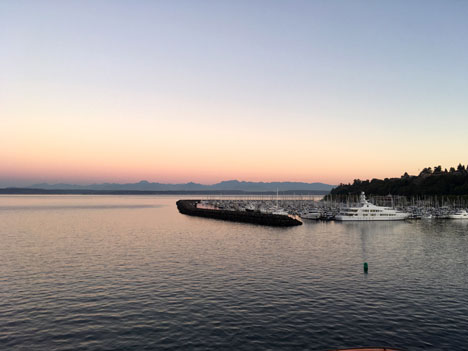 one final sunrise to see in the harbor and then it was time to leave the ship for good.

our trip home the  next day was thankfully free of any mishaps and we managed to get aisle seats in the exit rows on BOTH flights—almost as good as business class, haha. 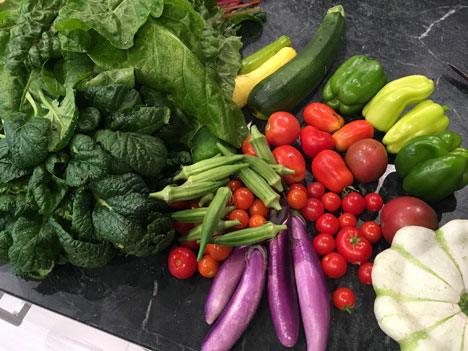 since i got home there has been a lot of everything going on at once around here. most immediately was the overabundance of produce that needed managing. it looks so pretty here but believe me, on some days the quantities reach ugly proportions and i worry that there won’t be enough takers. so far though, we’ve managed to distribute it pretty well.

second, tons of activity in our “little nothings book” thread in the knitspot mothership group. i owed the test knitters a few new patterns and having swatched for some on the trip, i needed to buckle down and get the rest done. 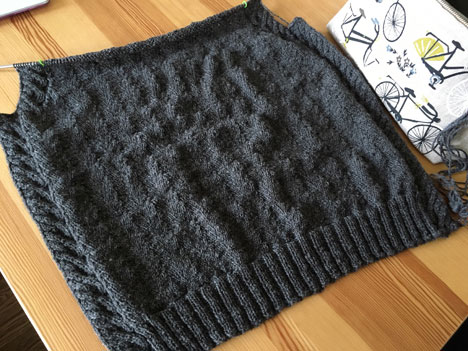 plus all the knitting i need to get done for fall/winter ensemble. i finished up the back of the twill pullover as soon as i got home, using it as my re-entry project that weekend. i mistakenly thought i had a class to teach that first morning and when i realized i didn’t after all, i spent the day knitting instead. 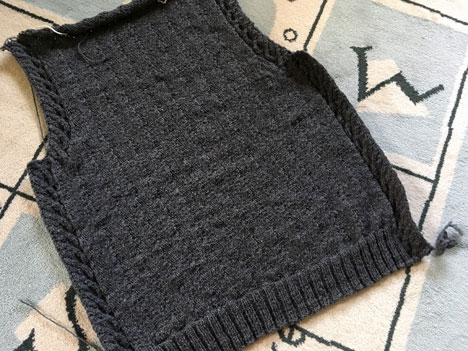 it’s a big sweater and a lot of knitting; i’m really glad the pieces are done now. i have to admit that it’s taken over a week to get them blocked because it’s been so darn hot and sticky here that i hated to turn the iron on, ugh—we are definitely not in alsaka any more.

i’ll be back in a day or two to fill you in on all the details and show you piles of knitting, class work, good eats, and some surgery . . . see you then!