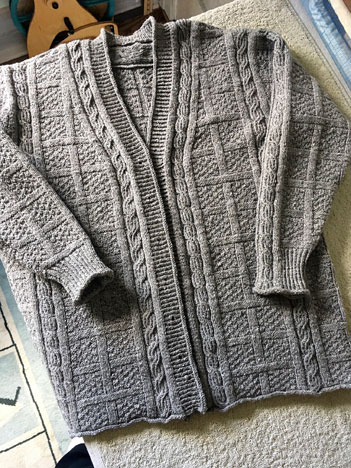 still needs a few final touches, but it’s done! i have to press the last couple of seams and then a long, soapy bath, plus buttons, but it’s almost there. more about that in a few minutes . . . 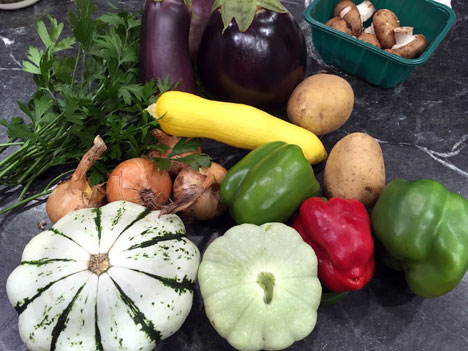 now that fall is truly here—it turned much cooler on sunday and has stayed that way; it really feels like we won’t have hot weather again—the garden has slowed down accordingly. i’m still picking stuff every day, but now it is a manageable basket of mixed things, enough for supper or a pot of something i can freeze. 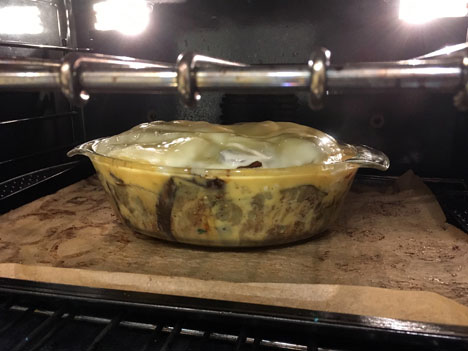 on sunday i used that bunch of produce to make the vegetable terrine we featured in the most recent chapter of our pairings club (Sold Out). with every single vegetable ingredient available in our garden (six or eight i think!) except mushrooms, i couldn’t wait to make delicious dish, which we haven’t eaten in a while. 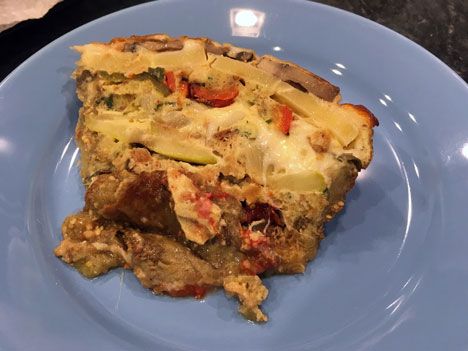 it’s sort of a cross between a terrine and a frittata. layers of grilled eggplant, tomato, onion, pepper, zucchini, potato, and mushroom, and mozzarella, with egg mixture poured in and all around, then baked.

it’s so yummy right out of the oven, but even better the next day. and sliced into slabs, it makes wonderful sandwiches, like the kind i used to buy at my favorite italian deli in brooklyn. 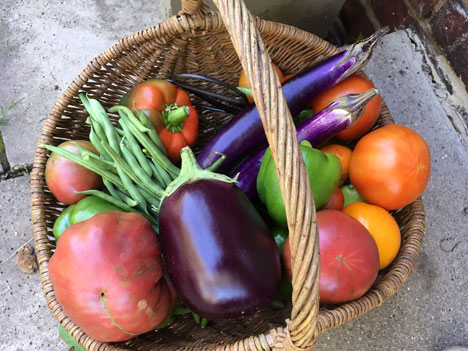 i skipped picking yesterday because i was busy and it was rainy most of the day, but today i got out there first thing and picked another basketful, this time a slightly different combination. 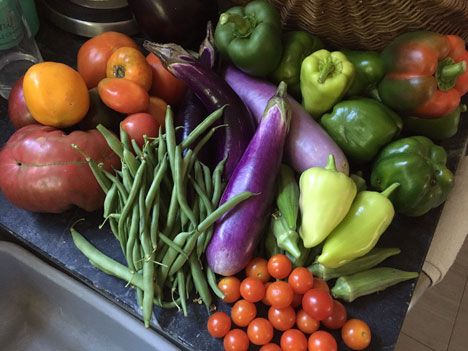 looks like a fresh batch of ratatouille, eh? and david’s favorite dish, hmm. 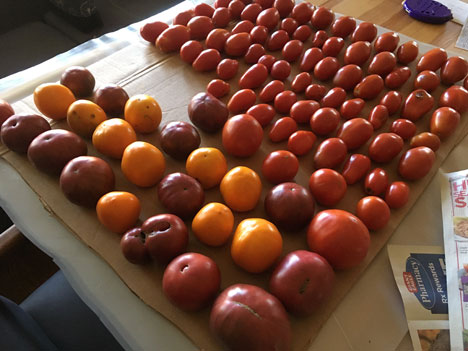 maybe i’ll even get on top of this batch of ripening tomatoes i’ve been ignoring. the nice thing about the romas is that they can sit for quite a while, just getting better; they don’t spoil as easily as the big juicy heirlooms do. the heirlooms are nice for ratatouille tho—big flavor, lots of juice; they don’t thicken as quickly.

we still have lots of great veggies to choose from for stir fries, soups, pasta, and many other dishes, but i think this is my last chance to make ratatouille, being that we have only one zucchini and one yellow squash left.

what i need is to come up with a plan for all that kale we have out there . . . 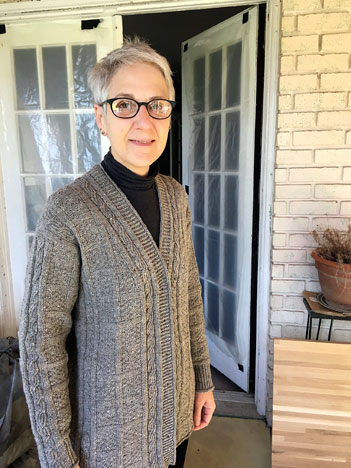 ok, NOW we can talk about the sweater—i love it! it still needs a bath but so far it fits great, maybe even a little better than the old one. although seriously, the new one is as exact a replica as you could ask for.

as it turned out, i even knit the same number of repeats of everything to get the same measurements, nearly to the row (i wasn’t trying for that level of exactness; it just happened). 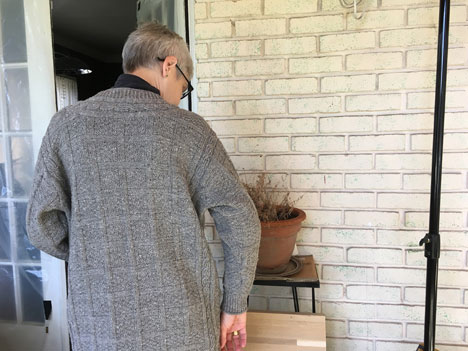 this is an oversized, dropped shoulder design, so the fit is quite loose through the body and armholes, etc. But i was careful about the fit at the neck and shoulders; one of the downsides of the old one was that the neck was a bit too wide which made it slip around on my shoulders. this one feels much more stable, like i could move around in it and not have to constantly adjust. 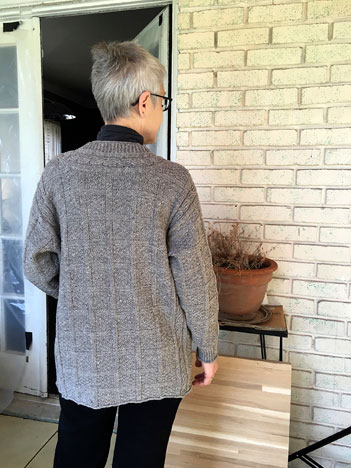 so happy this is done, just in time to wear it a lot. 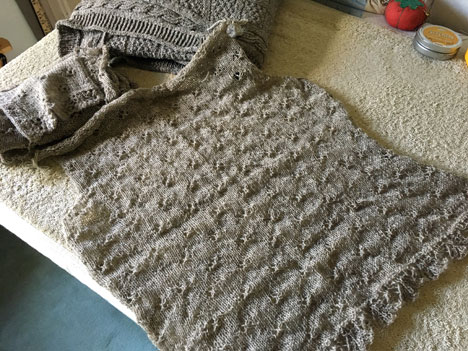 meanwhile i’ve been moving right along on my lace cardigan; the back piece is done (it’s SO so nice to work on a project that flies off the needles!) and i’ve added it to the pile of pieces waiting to be blocked.

just one more skinny sleeve piece to go, yay! which i’ve cast on and knit about the first six or seven inches of. once it’s done, i’ll fire up the iron and steam block the pieces, then seam and give it a bath. the finishing work on it is fairly minimal; just the seams and some simple garter stitch bands all around. 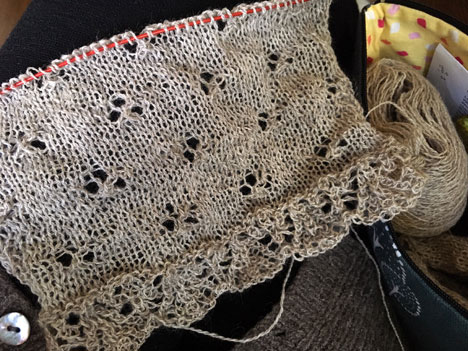 i’m thinking glass buttons will be lovely down the front; normally i would have sent a swatch away to my friend sarina asking her to make a set but as it happens, we have some pink and brown ones from her in the shop already—perfect! and if they don’t work, i think i also have some clear glass ones with bubbles inside that would also be pretty.

i’ll be done with this before we leave for our weekend in athens, OH; i just realized i need to get another project on the needles quick.

i’ve been working along on finalizing our lace scarf book while knitting in between wherever i find time and have sorta had my head in the sand; i had no idea i was almost out of projects. not to worry, there is a long list of things i can start, as long as i can cobble together a working pattern. 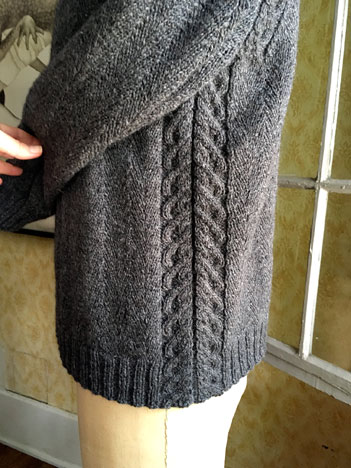 i’m thinking that the skirt to match the twill pullover/cardigan should be next—mindless enough knitting for the road, and quick, too. 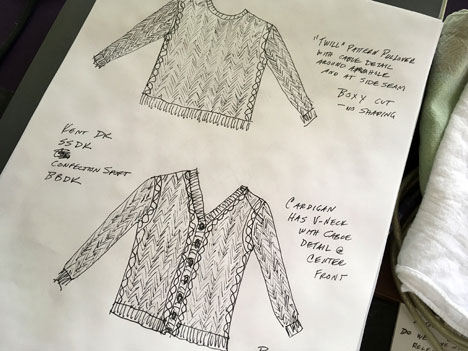 the skirt will be especially cute worn with the cardigan, which i think barb is going to knit? or someone . . .

speaking of the book, it will be ready very soon! our whole team is focused on it right now—i’m finalizing text and layout, david is shooting photos, hannah is working on cover illustration and social media, erica is working on creating kits, store listings, and social media, test knitters are finishing up samples, ronni is doing the last round of reviews on the patterns, anne marie is editing and correcting my text, and doug is ready with a smile whenever someone needs one.

still not sure when the exact release date will be but it’s soon—well before rhinebeck anyway . . . 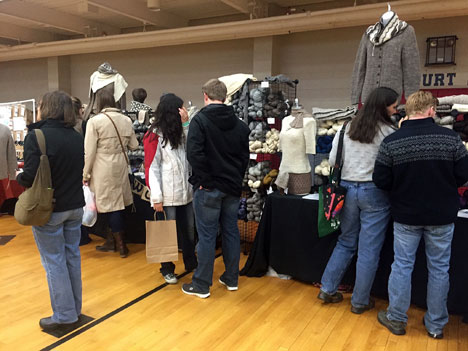 this weekend, erica and i will travel back to athens, OH for the athens area fiber faire—this is a wonderful little event and we’d love to see you there! we will be well stocked with all of our yarns, a good time to come and shop in a relaxed atmosphere before the rhinebeck crowds deplete our inventory!

not only will we have a booth, but i’ll be teaching yarn voyage class on saturday afternoon 10/1—if you’ve been wanting to take this class, it’s a great opportunity; only $30 for a three-hour class, supplemented by the athen community arts, parks, & recreation. 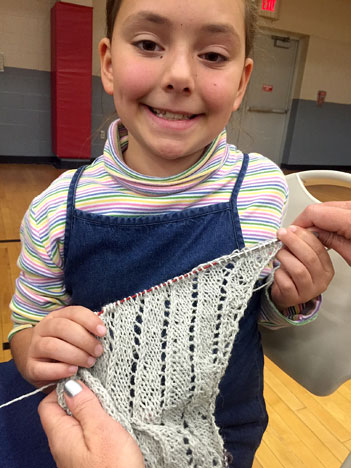 we are both VERY much hoping that our friend, little anne, will stop by to visit us and hopefully bring her knitting. word has it that after learning to knit in our booth last year, she has bee working away at it and improving steadily.

i think we may also be packing a little preview trunk show of the scarf samples and possibly a few single-copy patterns of repurchase?? ok, i made that up, but i bet erica will go for it when i talk to her tomorrow.

i think that’s all i have for today—hopefully i’ll have time for one more post before we leave, but if not, i’ll see you when i get back. 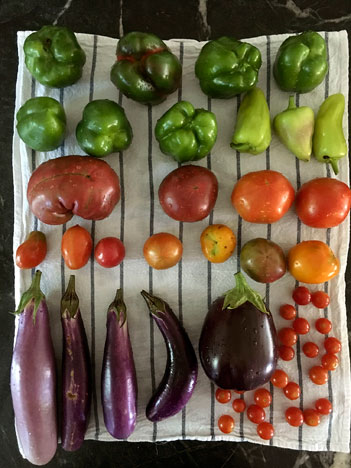