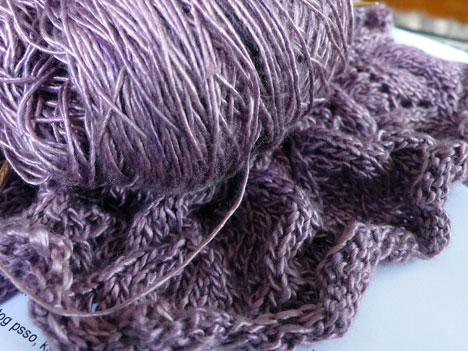 it’s no secret that i hate secret projects; all that knitting and nothing to talk about on the blog. bleh.
as a workaround, i’ve given myself license to gush about the yarns i’m using, without actually revealing the project details. i think that’s ok and i know you want to know . . .

from the comments i’ve been receiving, i know that the natural dye studio is already a very popular dye house among UK knitters. and now that they have had a presence at TNNA, their beautiful yarns will soon be more well-known to US knitters as well (and you can always order direct!)

i’m knitting this week with their silk 4-ply singles, precious, in colorway heather. the yarn is absolutely delicious to work with—smooth and buttery, with rich color. the nearly-solid lavender is highlighted with some pink and subtly streaked with pale brown and deeper purple. the resulting fabric is washed with variation, thoguh not in a distinct way. just lovely. 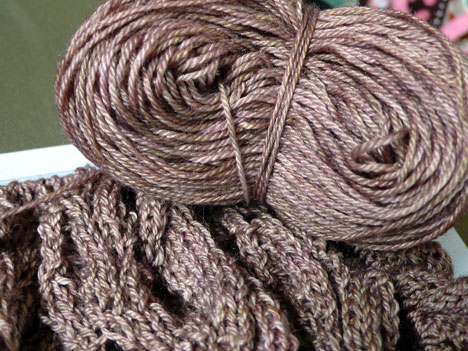 then there is this other secret project that i started on monday night. it’s on a deadline; i might be able to tell you more about it next week. the yarn is from the woolen rabbit; it’s kim’s bambino sock, which she has replaced now with the very similar pandora sock, a beautiful bamboo/merino/nylon blend (the yarn i used for pea vines and potager). the colorway i’m working with is woodrose.

suffice it to say that this project is practically knitting itself and flying off the needles; i should be able to finish it today (well let’s just say, i better finish it today, heh). 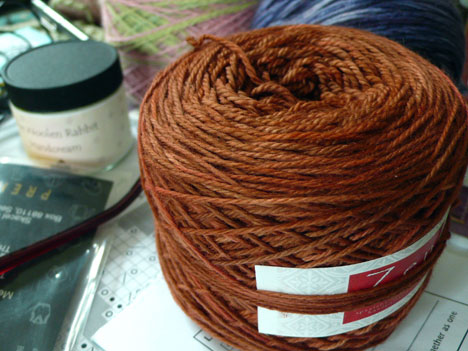 i mentioned the other day that i think my sock mojo is returning, and with the completion of david’s longjohn socks and the advent of chilly fall weather, i picked david’s brain to find out more about his favorite sock yarns (he loves the yarn i used for the longjohns, which is shalimar zoe). he said his other favorite socks are the tottering cables, knit up in zen yarn garden squooshy, which i also loved knitting with. i don’t have any more in the house though, and roxanne has replaced that yarn with her serenity sock line. similar yarn base, but with a touch of cashmere. so yummy. i do have lots of that in my stash, as it happens, so i wound up a skein in the copper peach colorway 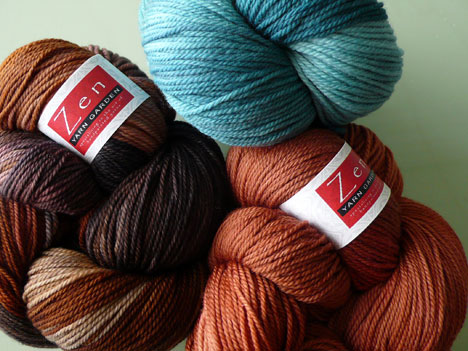 which came to me in this batch of serenity sock 20. i adore roxanne’s colorways and feel a kinship with her love of squishy sock yarn. david and i both appreciate a cozy pair of socks . . .

i haven’t cast on yet—i’m pondering what to do with the design. i’m sorta feeling a need to make another gansey sock; i like that style a lot. i definitely want something that isn’t fiddly to knit; my sock mojo may be too fragile yet for that. it needs to be something addictive that travels well. i’ll keep you posted on it . . .

speaking of david, he’s moved right on to another house project, now that my study is done. this time, it’s roofing work. the extensions on the first floor of our house which were originally built as porches and now house the office and the sun room, have been badly in need of new roofing and railings for some time (well, since we moved in). he took the rotting old railings down last fall and last week, began demolition on the sunroom roof. 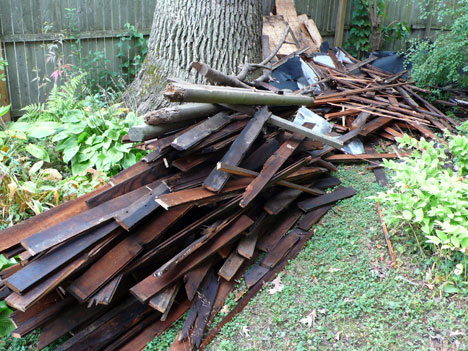 our back garden is now filled with debris, some of it very old and rotten, which is making me sneeze and cough like crazy. and for some reason, the job requires the use of a lot of indoor floorspace. 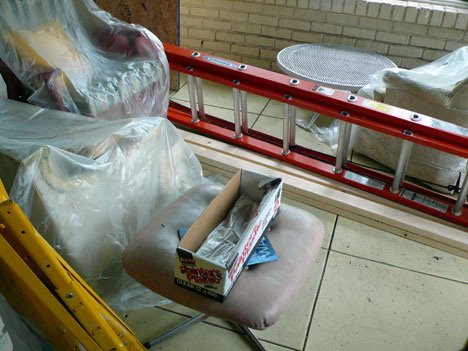 the sunroom is totally off limits at the moment because he’s storing all the materials there and because taking off the roof is making a mess in it—thankfully, he’s covered all the furniture with plastic. except for that footstool, but i forgive him . . . 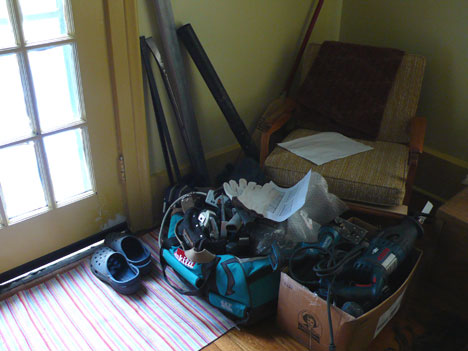 since the TV room provides the upstairs access, there’s a pile of tools and stuff there too. even the entry hall is a staging area of sorts

i think the front porch has the only access to outdoor electricity.
contrary to what my whining may lead you to believe, i am VERY excited about this project—i’ve been griping and moaning about the state of those porches for years and no one is happier than me that they are going to be finished. we have saved up six different times for this project and finally, finally, we will have new railings!!

railings complete the house design, but are mostly cosmetic, so it’s one of those jobs that has gotten pushed off every year for the sake of spending money on another, more urgent jobs—like the front steps last year and the gutters the year before, and the storm windows the year before that. before that, it was the furnaces (yes, plural; there are two) and before that, it was the gas and electric service.
old houses are just black holes for cash, let me tell you; we are definitely paying for this place on the installment plan.

but finally, we are in the closing stretch of the outdoor renovation—once the roofing and railings are done, it will be just how we want it. we’re even starting some landscaping after this, yay.
honestly, i never thought i’d see the day, but so happy i am.

yesterday i persuaded david to take a little time out from his project to do a photo shoot of a few items. i blocked the wristlets the other day so we were all set to take photos.

even the roofing debris came in handy as a prop 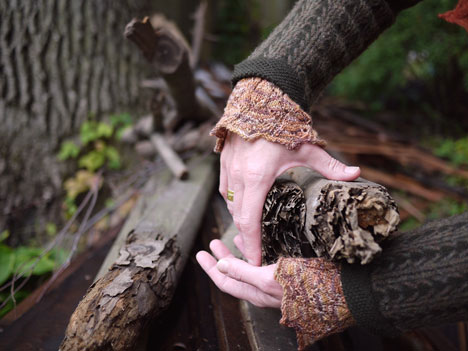 look at that cool texture in the insect-eaten wood.
the pattern will be ready soon and i’ll be all set to stick some nice pictures onto page one.

ok, it looks as if this dreary day has turned a bit sunny, so i think it’s time for a nice bike ride. i’m signing off; see you next time.

18 thoughts on “hiding right in front of us”