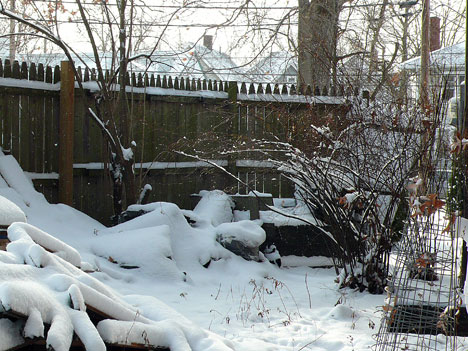 snow is piling up everywhere around here—we’re getting more of it earlier than usual. i’m hoping this bodes well for lighter snowfall during january, when i’ll be traveling a lot (fingers crossed).

anyway, all the storms meant that it was a good weekend to hole up with christmas knitting. i see that a lot of you are knitting up cabled keyhole scarves—thank you for the wonderful response to the pattern release; i’m glad you’re enjoying that project and happy to see that indeed, many of you have a finished one already, some within a few hours of casting on. yay for fast knits. 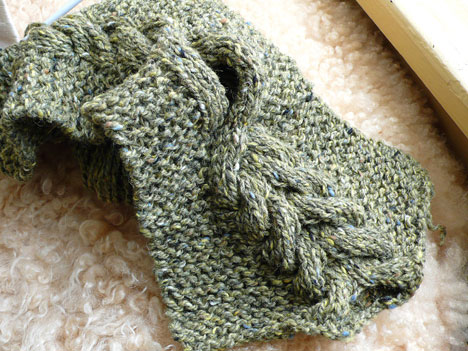 i’ve got two more on the needles now; this one in berocco blackstone tweed is zipping along on size 8US/5mm needles. and omigosh, is it soft—the yarn is a merino/mohair/angora blend and the feel of it totally belies its rustic appearance. just delish. 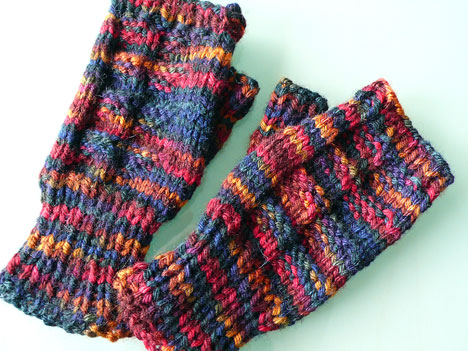 on saturday i went to debby’s house for a christmas knitting marathon; she’s making little fingerless mitts to test out the kids mitts pattern i wrote up. another super-fast knit that is also lots of fun. we’re getting a bunch of samples knit for (hopefully) a tuesday pattern release (but it may end up being wednesday).

claudine is also going to town with testing this new pattern—she’s knit a couple of different sizes for her two adorable daughters and was kind enough to send photos, even though she wasn’t feeling well this weekend (thank you claudine!). 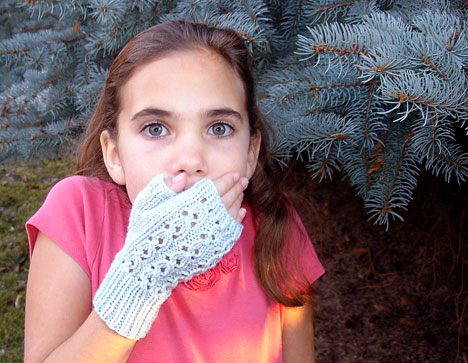 and our dear friend barb-who-can’t-sit-still has knit a couple of pair for her grandchildren too; she sent photos, but something happened to them in email and they appear squished; we’ll get more for the pattern release . . . 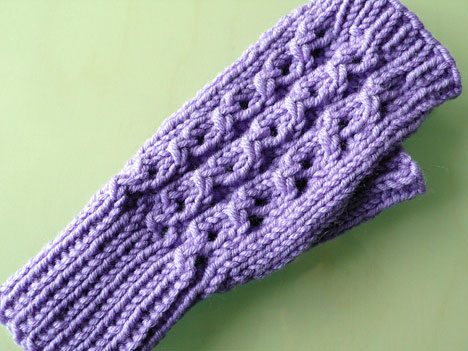 i’ve knit a few myself (one reason my current scarf isn’t finished). i think we’ve knit each size twice now, and everyone is giving a thumbs up for the fit and the instructions. which, in addition to five sizes, include a few options for patterns to add to the back of the hand (or stick to stockinette or plain rib). 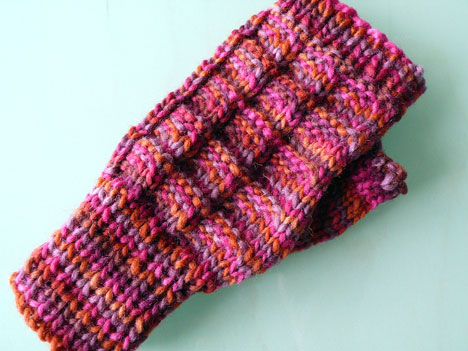 the pattern gauge calls for DK yarn and that’s what we’re using for ours, but if you prefer a finer fabric and tighter fit, you could easily sub in sport weight yarn and/or knit on smaller needles.

while debby worked on her little mitts, i finished up the last sleeve for the baby whitfield shortie. 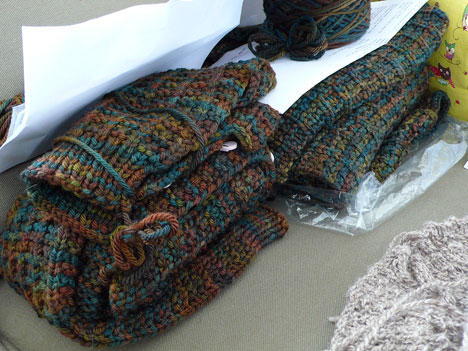 now i have two piles of sweater pieces, all set to be blocked and seamed. i cut it very close on the yarn for the second one, but i made it, though i might have to skip putting pockets on that one.

finishing the knitting of the second jacket of course does not mean i’m done. but i’m pretty close. if i take an afternoon and evening this week to block and seam, we’ll be able to do a photo shoot on saturday with the kids. then the jackets can go out in the mail next monday, and arrive just in time for christmas. i think the weather might be conducive to staying in and working. 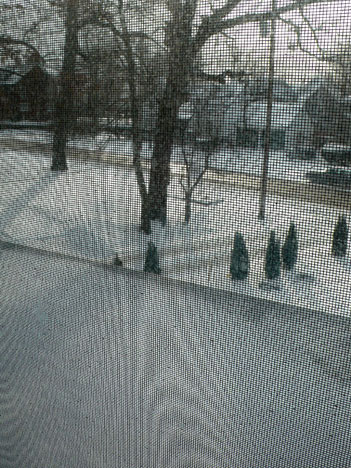 so with all of that in place, i started obsessing about a gift i’ve been putting off because, as usual, i’ve gotten comfortable with the idea that there is still tons of time before the holiday (don’t feel sorry for me; i do it every year and i never learn, even though every year i say that the next year will be different. those of you who have been reading the blog for a while know exactly what i’m talking about).

although . . . a quick check of december entries for the last four years reveals that most other years, i have started later than this—so there’s hope. actually, i’m finding that fact rather exciting, because it means there is more than hope (and an exciting challenge) that i’ll get this last gift done for a christmas delivery—if i’m good and really buckle down to serious knitting every day from now til the 25th.

i ran home saturday evening, worked up a starter pattern for it at the computer, then tossed my stash for just the right yarn. i know what the recipient’s very favorite kind of yarn is—handspun, in a natural color. and since i’ve used dyed yarn for the last few years, i thought it would be nice to use handspun. plus, i’ve been jonesing to work with handspun, so it’s a treat for me, too.

i happen to have several sweater-sized batches of handspun in the right weight (DK-ish) in my stash, from that period before i started the pattern business, when i had more time to spin large amounts of wool. 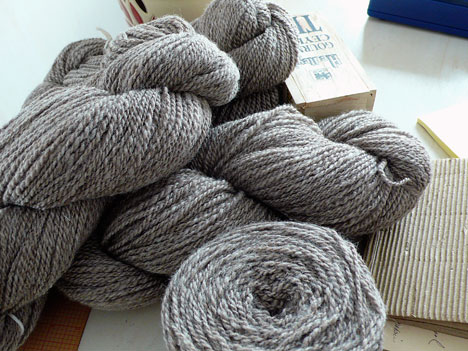 for example, this gorgeous silvery fawn bfl in DK weight. the fiber was from haltwhistle farm (sorry, i can’t find a link, but there the seller info is there in the photo) and i purchased it at one of our area fiber shows as a first-year spinner. 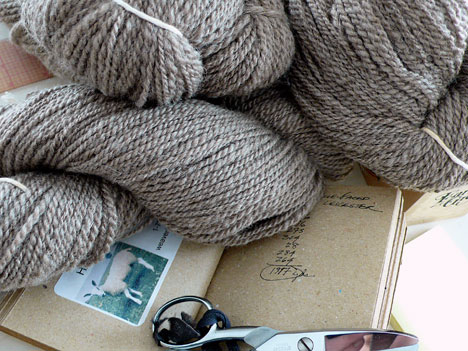 i spun the yarn soon after i purchased it (oh, THOSE were the days, haha), so it’s a little uneven, but not bad; it’s lofty and light, which i like for a large sweater and the inconsistent texture is pleasantly rustic. it also has a beautiful sheen; it’ll look stunning against the recipient’s skin, don’t you think? 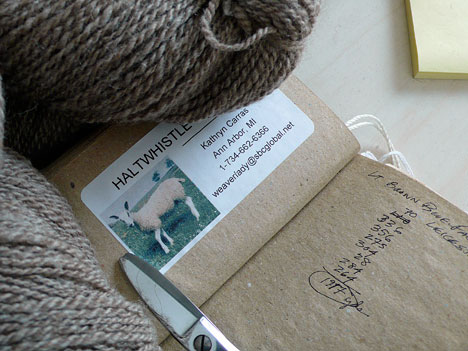 my spinning log tells me that i’ve got plenty for this project, with 1900+ yards (prewashed) on hand. even allowing for some shrinkage in the washing, i should have no worries about the yarns supply. there’s just one downside and that is that this yarn is lighter weight than i usually choose for my last-minute christmas project. it will require smaller needles and more knitting time—can i do it? 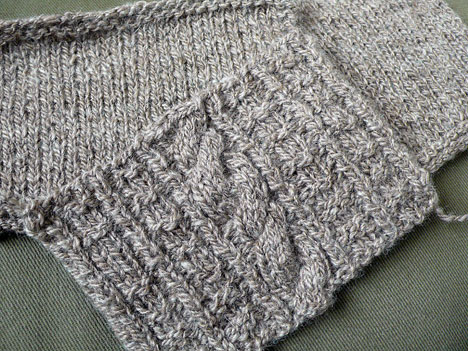 i never skip swatching, no matter how rushed or urgent the project seems; it’s especially not worth it when time is short—and i love swatching, i wouldn’t miss it for the world. besides, i need something to base my calculation on; since i always start from scratch, i literally can’t skip it.

i did a quick pattern based on an earlier design, the story of which i’ll tell you some other time. suffice it to say that i think the recipient will be completely charmed and appreciative about what i’m cooking up.

if only i can make it happen in time . . . i may be blogging a little less in the run up to the big day. 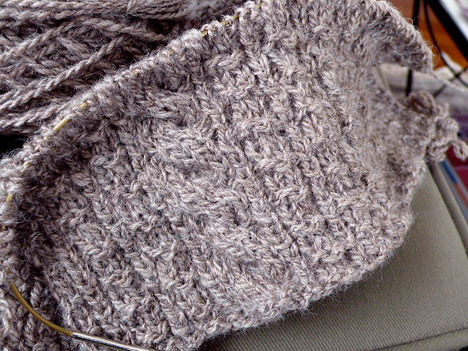 on sunday, we met again at debby’s house and this time susie joined us. they worked on more christmas gifts and i worked on the big piece i’d cast on the night before (i know; that’s the one that’s supposed to stay home, but i felt a need to get a jump on it and debby’s house feels like home . . .). 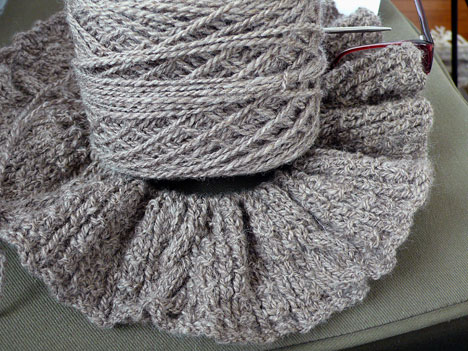 it should start going faster now, since the tension will be looser and the fabric a little softer. so far, i just love it. the fabric is SO squishy, with that handspun airiness i love. and the color is amazing; i’m so glad i picked this yarn. you should always knit with yarn you love, but it’s especially important when time is of the essence—loving the yarn will make you want to knit more often and for longer.

so you see, i’ve got my hands full until christmas; i really do hope i can get it done. it would be a wonderful surprise because the recipient totally thinks they are getting something quite different (but i really do think they’ll like this better).

ok, i gotta go now . . . class is coming in just a little while and i need to shovel the walks.

23 thoughts on “baby, it’s cold outside”