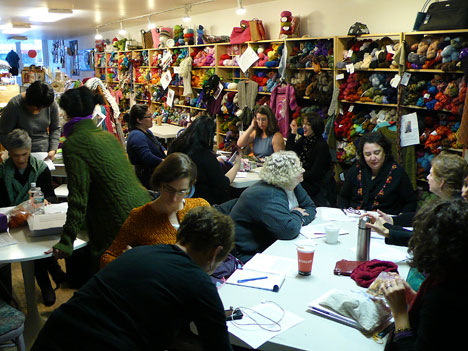 we finished up in NYC with a flourish, thanks to a day and evening at knitty city. cookie and i presented a designer talk on monday evening which was an awful lot of fun—thanks to all who ventured out in the bitter cold to participate. 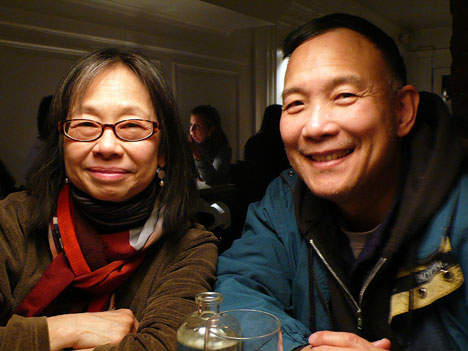 we were treated afterward to a lovely dinner at fishtag with knitty city owner pearl chin and her mate, arvin.

the food was artfully presented and tasted fantastic; with such good company, we warmed up quickly.
the next day i taught a sweater fitness class to a full house, including nancy, cathy, donna and agnes from our ravelry group and mary of the fischer clan.

cookie used the day to work a bit while i taught my class and afterward, we all headed out to the new grand sichuan for a family-style chinese meal, which was scrumptious—no photos however; the light was way too poor to make any of us look our best.

after dinner, arvin whisked us off to newark to catch our flight to the UK, where we were to meet up with alice to prepare for her knitting retreat in cornwall this weekend. i was so exhausted by the time we got on the plane that i fell asleep for a good while—which cut into the knitting time i had planned (what was i thinking??). i don’t usually sleep on the plane, but this one was mostly empty and we each got our own row, which allowed us to lie down. it didn’t last all the way to london though—by 3am i was wide awake and needed something to entertain myself with. 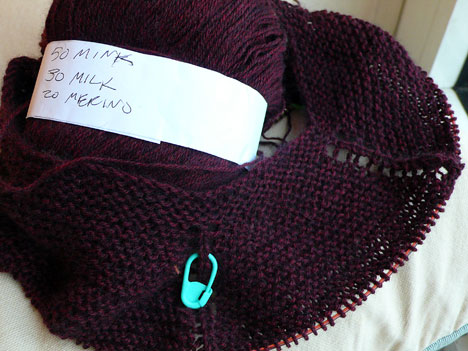 i worked on my new shawlette and finally got it off to a successful launch—it took a few iterations to decide exactly how i wanted it to be at the neck, but now i’m happy with it (i think). we landed in london at the crack of dawn, a little earlier than expected. 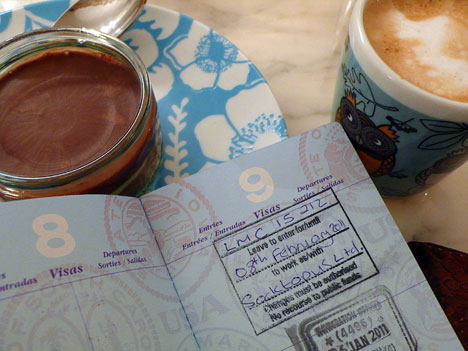 the passport control area was deserted except for us. the man who checked my papers was completely amused that i was entering london to teach at a knitting event—my work papers state that officially, i am a “lace sock teacher”. he asked if i was “socktapus” and i said no, i was knitspot. smiling and head shaking, he asked how socktapus and i had met up. i told him that we first met at sock summit, but that i worked with alice last year at knit nation also. i thought he was going to split his shirt laughing. he did NOT make dumb jokes about knitting needles; i liked him a lot.

cookie, on the other hand, had to sit in the pen for a bit—her agent was apparently not quite as smitten with the whole knitting-as-real-work thing.

FINALLY we got out of there—just in time to catch alice coming in from the parking garage to collect us—YAY. 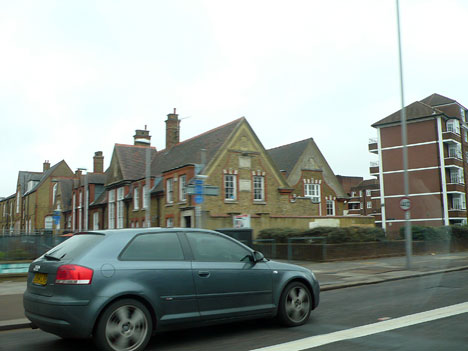 ever since we started our descent into heathrow, my ears were completely plugged—since i couldn’t hear a thing, i sat in the back seat and took pictures out the window all the way home 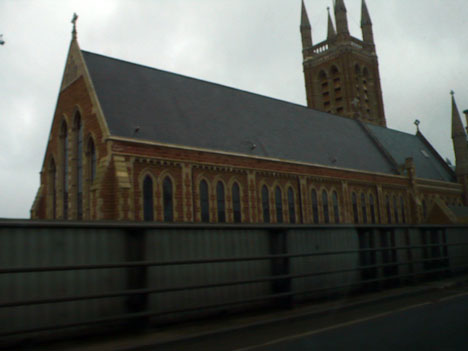 (i still haven’t completely recovered, but it’s a LOT better today than yesterday and no one has to shout to get my attention today)

this building is the london ark—alice was telling me a little about it yesterday and now i want to live there.

i love big cities and all the various neighborhoods within them—as we drew closer to central london, we could see each neighborhood in a little more detail. 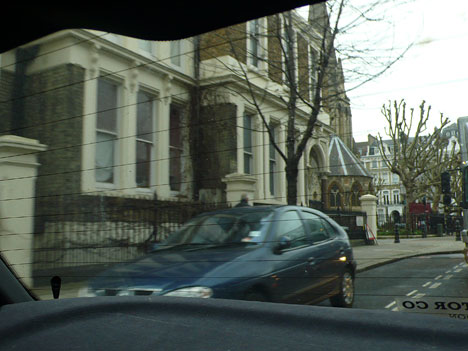 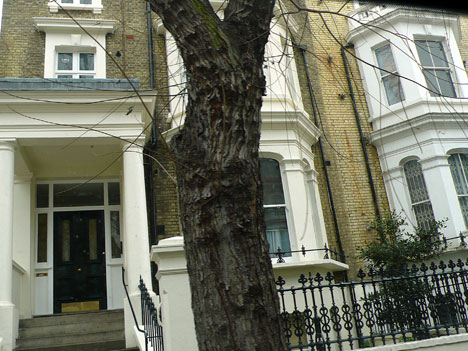 the yellow brick used in the buildings throughout this neighborhood is actually made from clay that was dug up from the ground right in the vicinity—cool, huh? 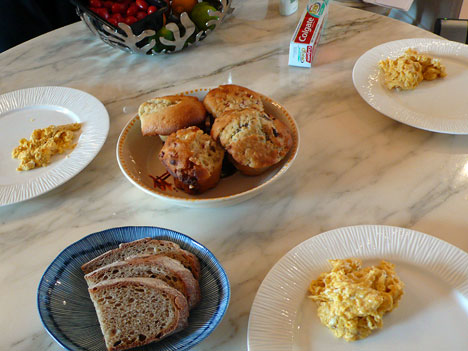 before long, we were snugly ensconced in alice’s house, where she treated us to a breakfast of eggs, toast, fruit, and good conversation. 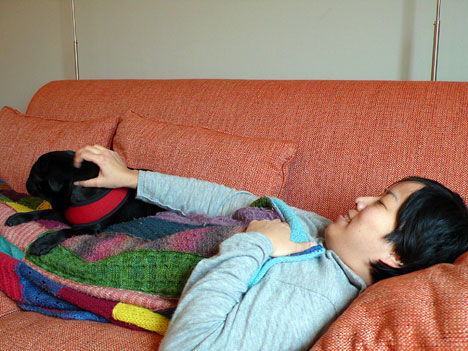 cookie spent most of the day in a horizontal position, but i wasn’t much better—it took til this morning to really get our sea legs back. 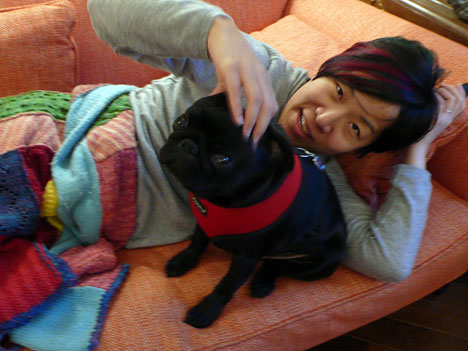 deuce, alice’s adorable pug, helped out as much as possible 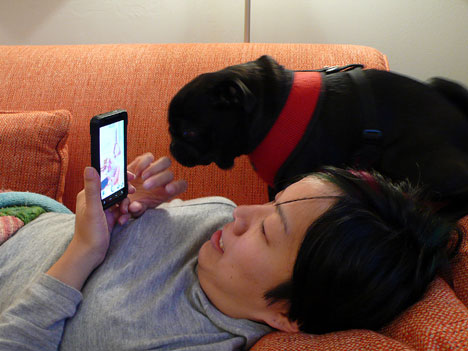 here he can be seen giving cookie tips on twitter strategy.
(she has a smart phone now—she’s a completely changed personality) 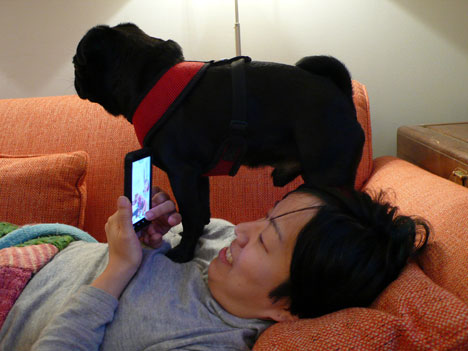 at a certain point, even the dog gets bored though, haha.

i have to admit, on this trip, i can finally see the use of twittering—when i’m on the go and can’t corner a big chunk of time (or wifi access) to blog, it’d be a good way to put stuff out there that i would normally share here.
so i’m experimenting . . . i don’t think i’d use it at home, where i have all the tools to put blog posts together, but in tighter circumstances . . . maybe. 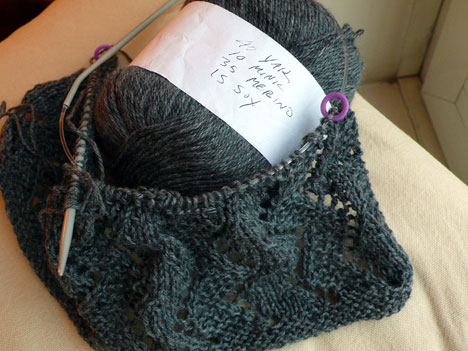 i didn’t want to spend all day twittering myself—i wanted to knit, which always makes me feel more normal (still no hearing, haha). i worked on my gray scarf during the day, while we chatted. later on, i went with alice to get some groceries for dinner.

after a good supper, we finally seemed to be getting our energy back—i took out my cabled hat project, we skyped david and janel, and generally picked up the pace a little bit. 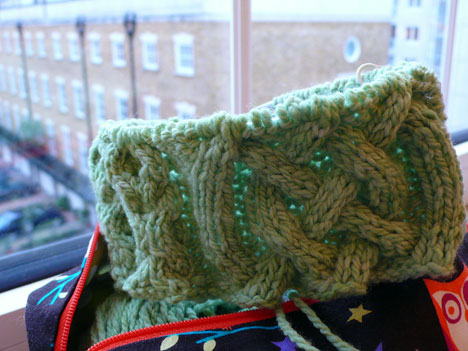 we stayed up pretty late, but at least that felt normal. i slept really well, too—as much as i wanted, for the first time in a few days. i still woke up early, but at least it was on my own clock. plus, alice made waffles for breakfast—what more could you ask for?

well, time to get myself cleaned up to go out for the day—i think alice and i are heading out to do some errands and have a bit of a walkabout, which should be a lot of fun. i’ll bring the camera . . . and tomorrow we head for cornwall, so next time you hear from me, it will be from the coast.