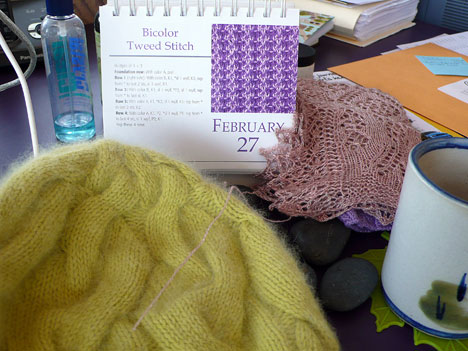 omigosh, it’s the end of the month already—how did that happen?
i’ve been home two weeks and i’ve accomplished practically nothing. and i’m going away at the end of march again, yikes—i gotta get my act together and produce some patterns . . .

actually, i’ve cleared up a lot of busywork, which, as you know, takes up a ton of time with very little to show for itself. still, it needs to be done:
tax organizer—check
christmas gifts put away—check
yarn photographed and stowed—check
email box cleared—check
four weeks of bookkeeping—check

you get the idea. not much knitting, but lots and lots of tidying up.
(and still more to do, but all in good time)

therefore it is a complete pleasure to finally turn my thoughts to fiber pursuits. but first, let’s celebrate the winner of last wednesday’s book giveaway (drum roll please . . . )

the winner of charts made simple by JC briar is: helaine c.!

congratulations, helaine and enjoy your prize—i think we have 438 very jealous friends here, so use it well.

and look—i finished something 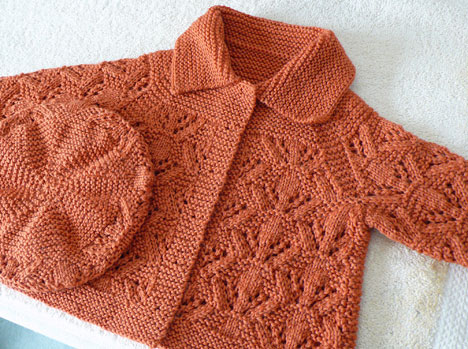 the inky dinky jacket and hat are done; they’ve even had a bath. man, that was so much fun to knit—i might have to design another baby thingy soon (yes, debby, it could be a dress next). i just need to get some buttons; i can’t believe i don’t have anything just right, but there you have it.

i’m going to have to steam the corner of that collar though—somehow, while it was upside down during the drying, that corner got pressed upward and it won’t go down—it’s totally bugging me.

like i said, knitting time these last couple of weeks has been scarce, but i think i’m slooowly getting back to normal (i do still feel as if i left half my brain at alice’s, but i’m trying). 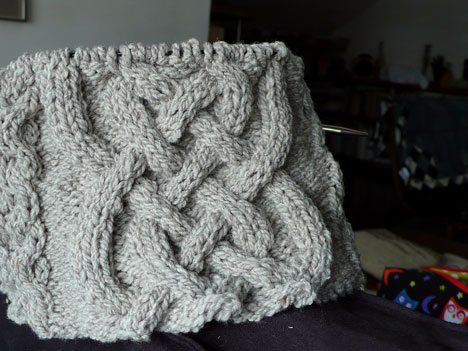 now that the baby jacket is done, i’ve been focusing on the final cabled hat sample in mountain meadow wool laramie, a chunky 2-ply “baby cheeks” merino (baby cheeks, cuz you can’t stop squeezing it). this one is in colorway coconut and it’s for david—since this hat really looks best on him.

i tried—i knit one for me in their new DK weight, colorway sprout, and well, i love the the way it feels and it’s great for shoveling, but it’s not the look i’d strut about town, if you know what i mean, haha. oh boy, it’s cute in that grass green color though; i like the it so much i may try again with a different hat—maybe a lacunae or maybe something new.

the pattern for this toque is all set, so as soon as this coconut sample is finished, i can take photos and release it. 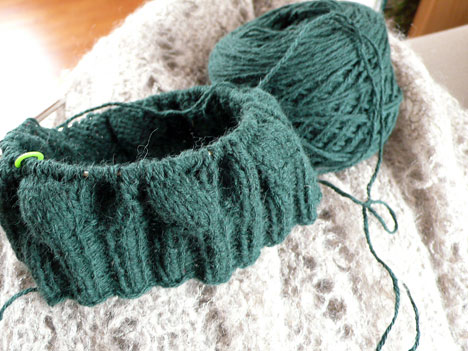 maybe it’s the weather, but it’s all about hats this week. i’m making my way through a second sample of the mink monkey bread hat to test my charts for the pattern. as soon as i have that written up, i’m sending it to jocelyn for testing (she’s on a hat kick, too) and it won’t be long after that that we’re ready to roll it out (i know you’re waiting; i hear you!).

the luscious mink/cashmere yarn for that scarf and hat is from great northern yarns; this one is in the deep forest colorway. if you’re trying to plan ahead, i’ve used three skeins for this wider version of the scarf; the narrower version will require two skeins. and the hat takes a little less than one skein. craig expects a shipment of back-ordered colors in early april.

like i said a few times since i got home—i have spent a great deal of the last two weeks slogging through personal and business paperwork, email, and tidying up all manner of situations i put off while i was away.

plus (and i can’t believe i haven’t even shared this yet), david has torn up half the second floor to begin work on our main bath as well as a replastering job on our bedroom ceiling. which means that:
A) i have yet to sleep in my own bed and
B) my closet is sealed shut to keep it clean inside

which means I AM STILL LIVING OUT OF MY SUITCASE. sigh.
now i wish i had overpacked . . .

anyhow, i’ve been a little disembodied and not very in touch with my inner designer (maybe it’s the purple sweat pants i’ve worn too many times to count??)

so it was with great delight that i had a moment of genuine artistic response today, whilst preparing photos for the blog. i was in my work room taking pictures of the baby set, when i noticed a basket filled with the bobbins of newly-plied yarn i finished up this week in spinning class.

i had totally forgotten about them and realized with glee that this would be great time to skein them up and put them in the wash—i love skeining handspun; it’s so satisfying to learn what the final yardage of all that labor amounts to. 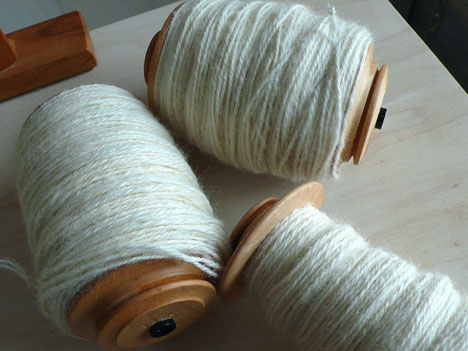 i unpacked the basket onto the winding table, left the room for a sec and when i came back i paused—the yarn was so beautiful, laying there in the morning light that i was inspired to grab the camera and create a little photo love-in on the spot. 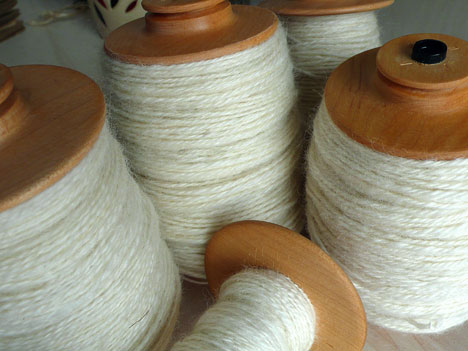 in 2009, our spinning class purchased the best in show fleece at the great lakes fiber show—a gorgeous white coopworth that sparkled when the sun hit it. 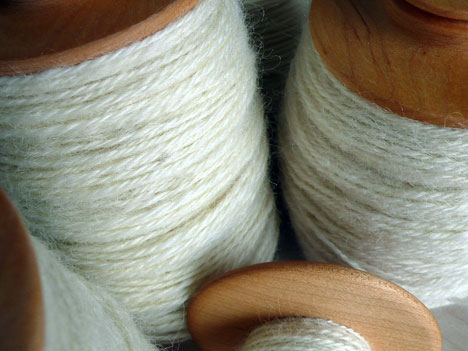 we were looking for something to create a custom gray sock blend, but we melted at the sight of this one and bought it. we had it cleaned, carded, and blended with some nylon—we each ended up with about 13 ounces to spin. 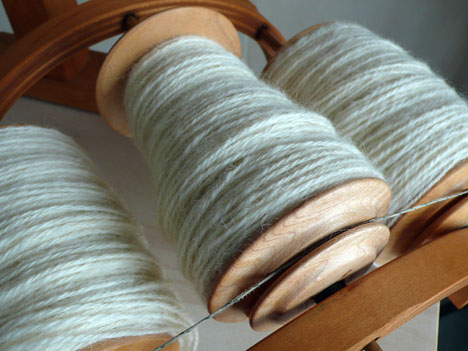 this past october, i decided i’d spin it up to knit socks for david’s anniversary gift (good thing i didn’t say which year they’d be finished). 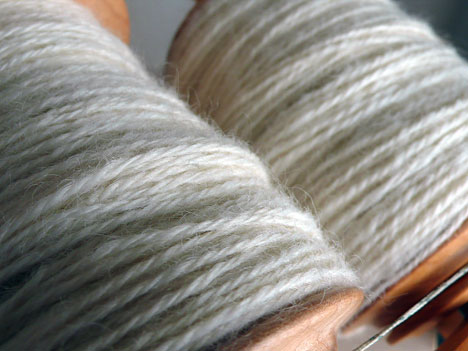 i decided on a 3-ply, which meant spinning very fine, so i had to settle in for a longer commitment than i’d originally imagined. and then i was away and we didn’t have class for many weeks. but now it’s done 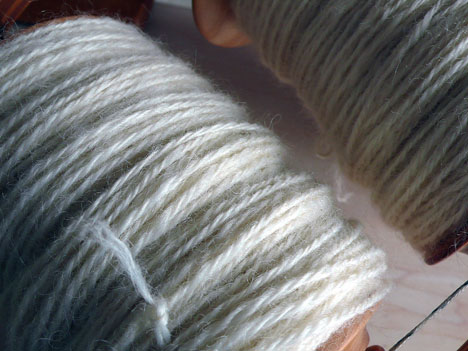 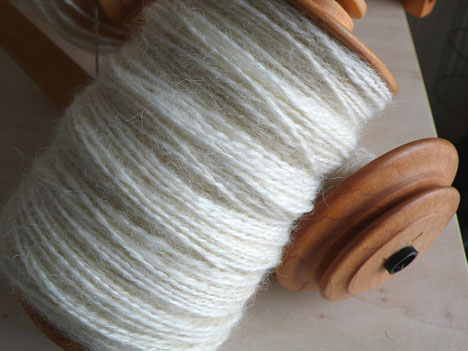 coopworth is a very interesting fiber—at least to me. i worked with my first coopworth very soon after learning to spin. it was louet fiber—i dunno if they still do this, but at that time, they left quite a bit of grease in the roving. i wasn’t familiar with any of that and was a little disappointed and underwhelmed at how wiry and lank the resulting yarn was. 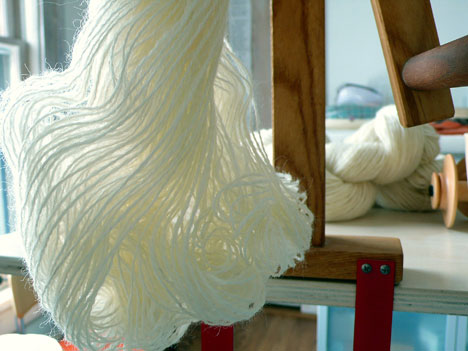 but then i dutifully washed it and was completely taken aback by the transformation in the yarn—what had been a stiff and unpleasantly wiry yarn had bloomed into a soft, poofy, pillowy one. i liked that. 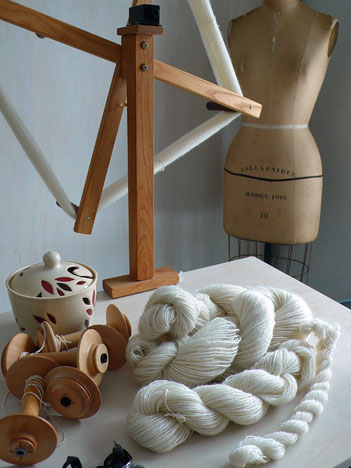 now my white coopworth was still wet from the wash when it got too dark for pictures today, but i promise i’ll take some when it dries and share those, too. for now, we have these lovely still lifes to look at (can you tell i’m a huge fan of dutch paining?) 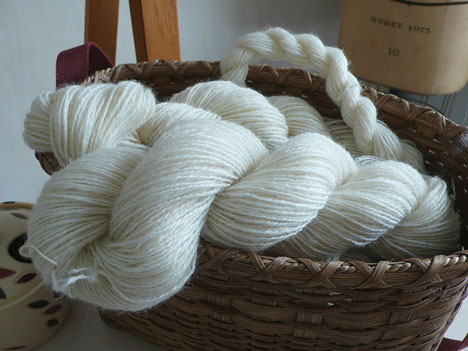 so that’s it for today—have a good monday everyone. i’ll be back soon . . . 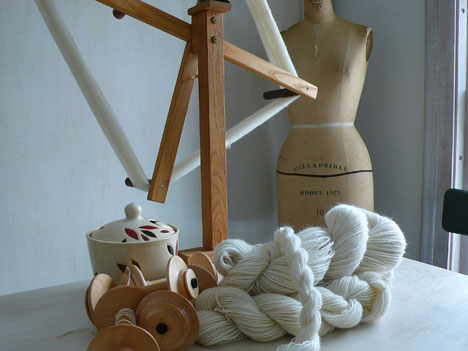