the other day, aija generously offered several sets of the stitch markers she creates for the upcoming blog contest.

ahem. i guiltily remembered i had not visited her shop since she announced she was going to open it. when i first went, it did not have any stock yet, but now . . . well, it’s full of goodies. i promptly fell in love with two sets, and decided they would make great gifts (maybe—if i can bear to part with them).
and yesterday they arrived in the mail, 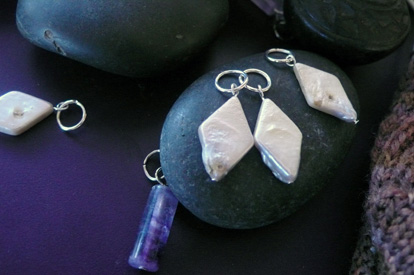 i just love these abalone little harlequin diamonds, as well as the delicate amethyst quartz cylinders 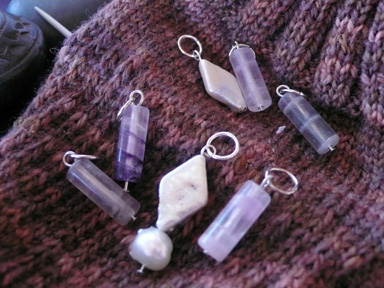 the brown sock thinks they are just for him (i’m not commenting on the sock’s desire for jewelry . . .)
along with my purchase, aija included this abundance of samples, in styles i did not choose to buy
(it was hard, i swear, but i know it’s wrong to take everything . . .) 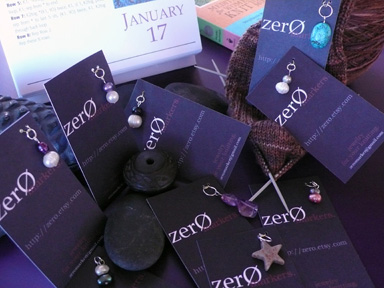 she just understands my love of variety—there are so many different ones—all so delicate and simple. sigh.

in other news, i finally finished the first smokin’ sock 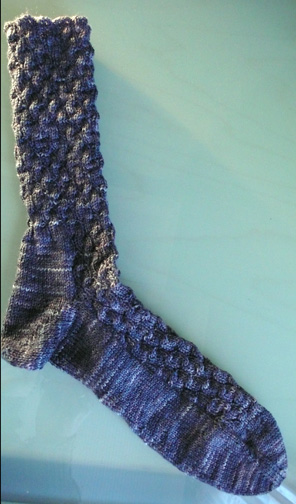 i cast on right away for the second sock, cuz, i confess, these tried my patience a bit. and it’s totally my own fault. i decided on the skinniest needles i had, and made them pretty long. but then, the results make it all worthwhile. the fabric is lovely—soft and dense and comfy, but not thick at all.

the pattern is all written, and ready to roll as soon as i insert the picture. these socks can also be knit in heavier yarn, and i will do that sometime, just so i don’t hold any prejudices against them.

and the spinning? well, i didn’t spin any more last night on that red fiber, but i can tell you it’s working up a treat! i did get both of the spunky eclectic batches washed and nearly dried. and boy, did they do up nice! talk about softness . . . 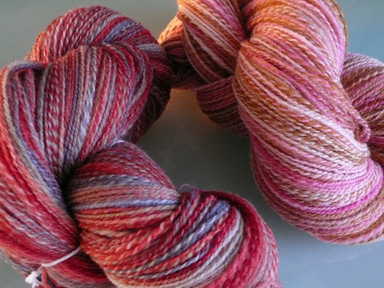 that’s navajo on the left, and winnipeg on the right. both destined for socks. i bet you want a closeup, right? he-he-he, you naughty vixens you . . . 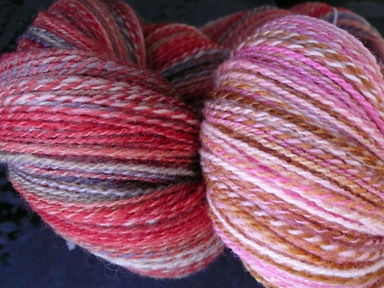 don’t they look like they are reaching out to smooch you?
after i spun navajo, i was worried that it might be a little thinner than i liked, so i worked winnipeg up into a slightly beefier weight, but only slightly—this fiber poofs up so much that i didn’t want to risk ending up with DK weight. i love them both dearly . . .

which is good, because i was, after all, disappointed by the caramel alpaca/wool sample i spun. it’s not so soft, and not lustrous, and too wiry and fuzzy in a bad way.

if i spin the rest of it, i will make a quick chunky-weight yarn to be felted into clogs, where it WILL seem luxurious, and not at all second-rate.

and now, i have to close with a confession. i started something new.
i know, i KNOW—i have a long list of WIPs that need attending to. but i’ve had my eye on another yarn in my stash that i made also in my first winter of spinning, a white BFL, which i dyed last winter. i came across in when i was reorganizing and put it near the top of my list. 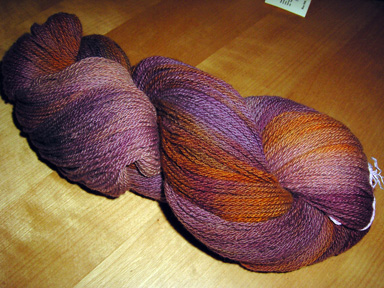 it’s really soft, and pretty, and i have held off all month from tearing open it’s strings and winding it up. i promised myself i would finish at least ONE of the smoke socks before i cast on with it. and last night around 12m, when i had woven in the last end, i went upstairs to just look at it.
i had every intention of holding it up as a carrot to myself for when i finished the second smokin’ sock. i had myself a good lo-o-o-ong look, and then i ambled off to watch TV and work on a mitt. but it kept gnawing at me (yes, it IS all the yarn’s fault . . .).

after all i have one more sock pattern ready to release, and i’d like a new picture for the cover. remember those mermaid socks from last summer? the ones i sent away? 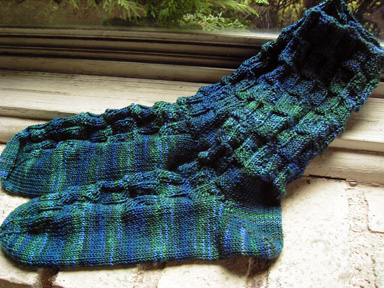 i finally got around to patterning those up, only i had to change the name. they are now the math whiz socks, as an homage to pythagorus, patron saint of the stitch pattern featured in the cuff and foot. oh yeah, and he was into math too—he of hypotenuse fame . . . so anyway, i’d like a new picture for it, and that requires a new sock, right? and since this yarn is the right weight, i justified casting on. 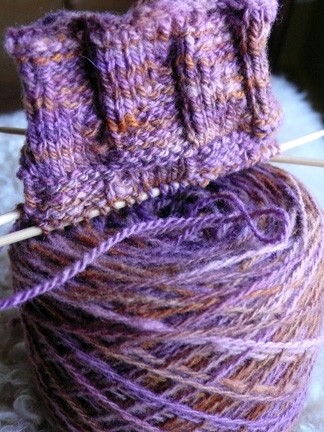 and i promise, this morning i got up and knit an inch on the second smokin’ sock before work.