thanks for all the feedback on my stocking cap. i like it too.
that red one is going to be a gift though, since i have the little red cap AND i sorta promised it to someone special.
i’m going to knit another one for myself, since several people asked for a pattern, and that way i can test-knit it. now i just have to pick out some yarn.

while i was away i went through albany and visited with my mom. she was holding few things for me from her move a couple of years ago. it was just a small box, since most of the big stuff came here on a truck, but she included some early handmades that made me smile.

as a four-year-old, i must have been hard to entertain or keep busy, because that was the year i learned to embroider and sew, and to knit.
it was also the same year i got my first business—the vegetable stand.

one day, my dad showed me how to make change, sat me at the end of our farm drive with a wagon full of corn, and gave me a coffee can with quarters in it. he painted a sign which said “CORN: 50¢”, so i didn’t really have to do anything until someone stopped (although flagging customers in would have been fun . . .).

i liked it well-enough, but it did seem as if there should be more activity involved. later, when it took off a little more, he built a wooden hutch that served as a store, and my mom began to show me how to embroider, to wile away the summer hours. in hindsight i realize the genius at work here—they had three more children younger than me, and what better babysitter than busy hands? not only that, but i do remember my sister and one brother sitting close to my side as i executed those first stitches. no worries about any of them wandering off then—we were all completely absorbed in this new business of sewing.

so, anyway, there in the box was my first embroidery project, the one i got to make AFTER the practice pieces on old sheets.

it’s a dresser scarf. back then (i can’t believe i’m using that phrase), you could buy these at the dimestore pre-printed with a sort of “map” of which stitches to put where—little Xs for cross-stitch, little dots for french knots, etc. as you can see, i was intent on using every single color i owned in it.

i think this piece took almost forever to finish. i mean it—i’m sure i worked on this off and on for at least a year, if not more. of course, by that time i was sewing doll clothes and getting distracted by being allowed to use the sewing machine. once i did finish it though, it was well-used in our home for quite a few years.

another thing in the box was this needlepoint piece

according to the date, i was 14 by then. which makes this a piece of crap, because by age 14, i was doing some extraordinary sewing—i guess original needlepoint compositions just weren’t my forte. thank god i gave this hobby up.

and then there was this, which i was really happy to see 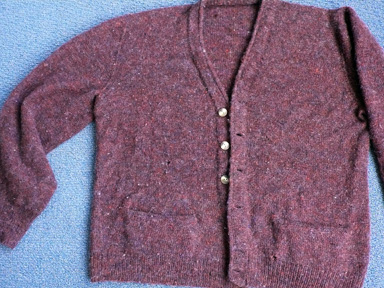 this is a sweater i knit for my dad about 15 years ago or more. he was especially fond of the “golf sweater” style—no fancy cables or ribs for him. i’m glad it survived the move becasue i’ve been wondering what happened to it. it is knit from green mountain spinnery sport-weight singles in a pattern from a vintage men’s sweater book. 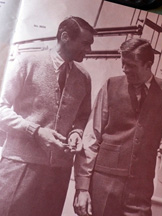 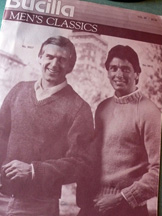 this book was printed in a couple of different versions. i’ve made several men’s sweaters from it that came out well-fitting, and well-received. everything in it is fairly plain and pretty much what most men i know are looking for in a sweater.

i obviously had some issues with it biasing, even after it was blocked; that’s the danger of working with singles that i didn’t know about when i started. i definitely wasn’t as good at putting the pieces together as i later learned to be. now it has moth holes too. i’m thinking about reblocking it and maybe trying to patch the holes. but you know how that is—once you start, you just find another one nearby. (don’t worry debbie, i’m not going to wear it—i thought about it, but it’s too big). maybe i’ll just keep it as is to remember him by.

last night i worked on my ragg sock and now you can really see the colorways. 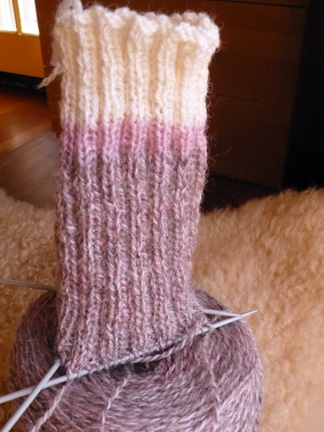 i am SO very happy with this yarn. it is tons softer than i though it would be. if you have issues with romney being kind of scratchy, i highly recommend plying it with something soft. works wonders. and the sheen offered by the pink strand is a nice touch too.

still working away on the starlight wrap as well. it’s going to be a while before i finish, so you may just get casual shots of it til then.

i’ve been looking at the fitted knits book and will talk about it tomorrow.