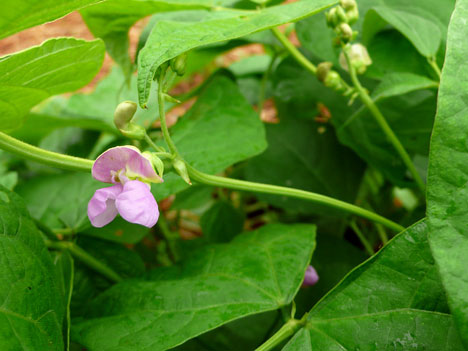 once again, we’re having a bit of a rainy week, but in a good way—it mostly rains at night or in the early morning, leaving the daytime hours fairly dry and mostly cloudy, with unpredictable but spectacular bursts of sun.

(ok, i totally take that back—the sky just opened with a downpour of what can only be described as biblical proportions. then it paused. then it started again, promising something along the lines of the big bang—only wet).

which means that everything is growing like crazy—you wouldn’t believe how fast. just since the other day for instance, when i thinned the greens, the broccoli raabe has doubled in size and begun to flower. 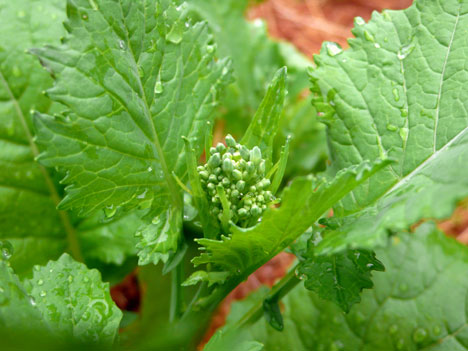 gotta get that gathered up and out of the dirt before it bolts—put it on the list for later today . . . 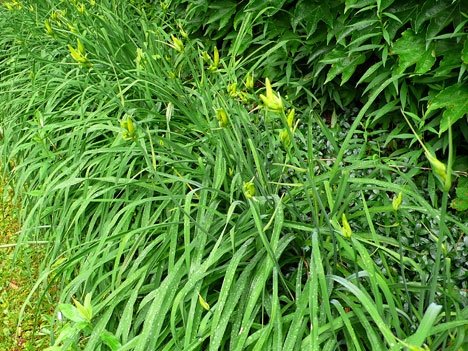 and my yellow lilies are just dying to bloom—they can hardly contain themselves. any minute now there will be a chorus of bright yellow flowers opening along the garage wall.

elsewhere, the asiatic lilies have already begun their annual parade—first the orange, then the pink, and now the red . . . 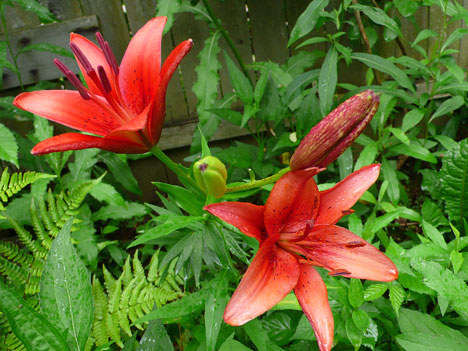 the hostas will be next; they are setting up nice, big buds all over. these are always a big attraction for the bees and because they last so long, provide a lot of entertainment in the back yard. 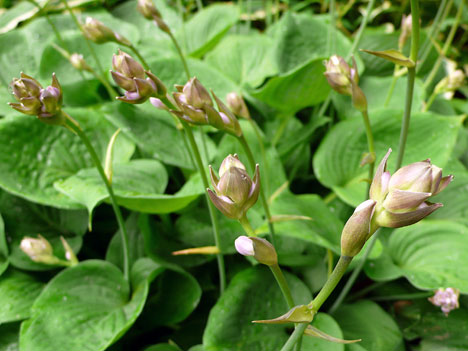 we have all sorts of hostas, with flowers from creamy white to palest lavender to dark purple. i never used to think much of the flowers til i got to see them in the quantity we have in our yard. 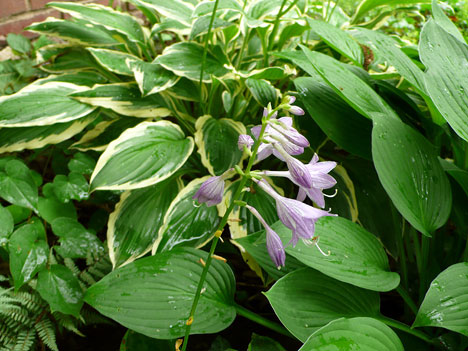 the hostas are positively bursting out of their beds this year; they have multiplied and grown so large that they are fighting for space. i need to make time when i get home from my july/august trip to do some dividing and transplanting. 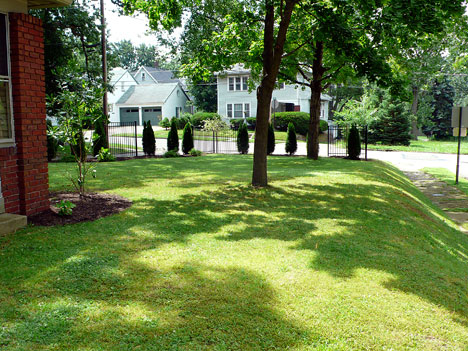 we have space—now that david has gotten all the fencing in on the other side of our lot, the major landscaping over there is complete and we can start filling in with plantings. 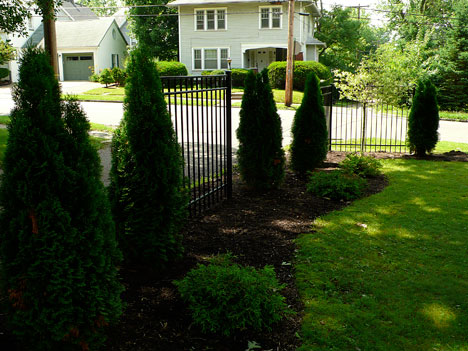 last fall we had the old bramble thicket along the backstreet pulled out and the area replanted with a background arrangement of more manageable trees and shrubs. the fencing would have gone in too, had the right parts arrived. and once they did, it was too late; the snow had started to fall. 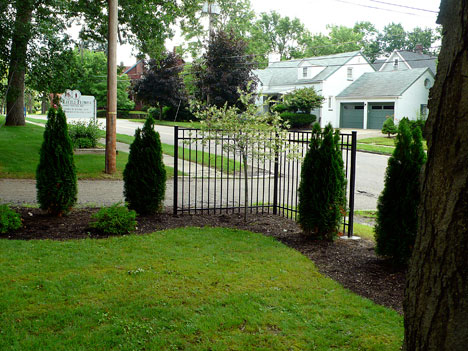 so david got that put in this past week and it really looks great. it puts a nice finish on the corner part of our lot without looking like a jail.

next he’ll finish the last of the upper porch railings and the outside renovation will be pretty much done. we can add some colorful plantings and greenery at our own pace. 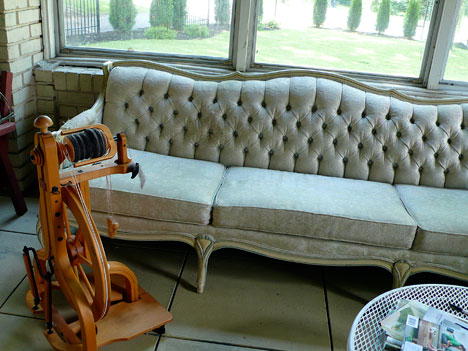 it’s an especially nice background for porch living during the summer . . . though i haven’t been doing enough of that up til now.

i’m getting ready for the tour de fleece, which i joined for the first time this year, after an invitation arrived from jen, chris, and clara to join team superfleece.

you should join us—it promises to be a lot of fun and we have some awesome giveaway stuff. you can even join as a cheerleader, what’ve you got to lose? 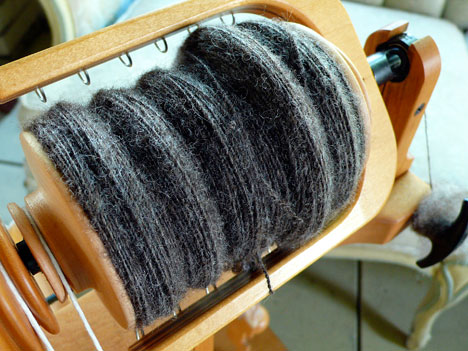 i’m not even going to be home for most of it (or anywhere near my wheel), but i’m gonna do my best with the time i have. i’ve been working on this batch of finn fiber that i’m spinning into a 3-ply sweater yarn. i would like to finish it up during the tour (haha), but truthfully, i’ll be happy if i just spin more than once a week, which is all i’ve been able to manage for the last year (when i’m home).

in fact, last night we had spinning class and i got quite a bit more of this bobbin filled, but then we realized that after next week, we will not be seeing each other for at least a month, arggh.

we did make a lot of headway on making promises to ourselves and each other though, about how we’d spin in the absence of class to prod us, heh. 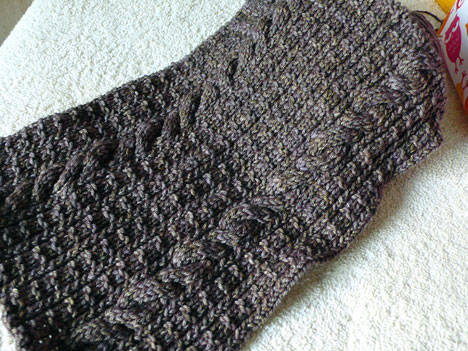 on other fronts, though i’ve been keeping up a pretty good pace; the second front of this rene cardigan for instance, in nearing armhole depth and if all goes well this evening, i may have a finished front by the time i go to sleep tonight.

i’ll be sorta sad to see this project end; i’ve really enjoyed knitting up this woolen rabbit grace—its soft bounce makes every stitch a pleasure and i barely have to look at what i’m doing, the stitches glide so smoothly over the needles.

the pattern is in ronni’s capable hands for proofreading and barb’s test knit is done—all i really need is to finish this sample and get some nice pictures. of course, i still have to knit the biggest piece—the back—but i may be able to do it before i leave . . . 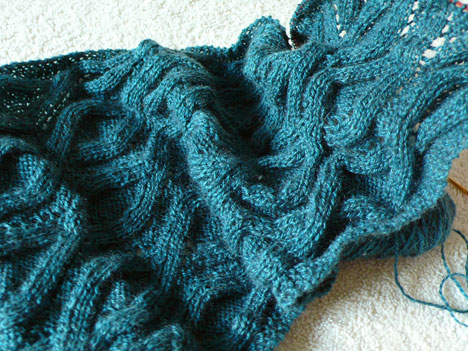 the deliciousness of sweet georgia cashSIlk is piling up as i add a repeat here and a repeat there to my scarf in colorway riptide. 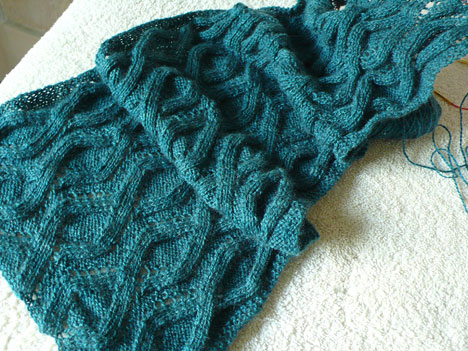 and my yarn ball has diminished quite a lot, so i must be making progress, right? it’s always hard to tell with a scarf; i daren’t measure it until i’m sure i’m more than halfway and even then, i prefer to be further (you know what i’m talking about!).

of course, that’s not all the knitting i have going on—a wealth of secret projects at the moment prevents me from showing you everything, but there are some really wonderful knits hanging about at all stages of OTN-ness.

we are thick in the throes of planning and executing projects for our fall in full color club and OH what pretty things there are going on in that regard. save for one, the sample skeins are all assembled now, so we can take stock of the entire range and the effect it has as a story (we’re excited!). projects are at all levels of constructions, from “still knocking around in my head” to finalizing the written pattern.

i’m both really nervous for everyone to like it as much as i do and so excited i want to tell everyone too (but i won’t). i’m actually pretty good at keeping secrets, even my own, haha.

we still have some spots open at the yarn membership level and of course, there are unlimited spots in our pattern-only level. come join us! 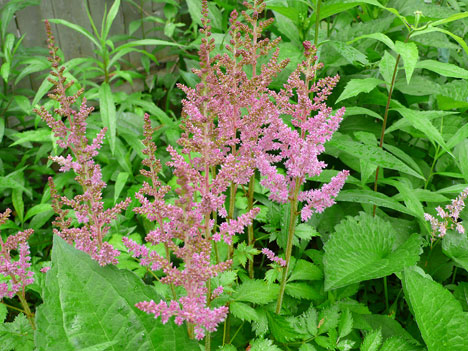 and flowers for everyone who has already joined us, yay.

now, i have a couple of announcements to make about upcoming events

i’ve mentioned several times that i’m heading out on another big teaching trip soon; i’ll be leaving here on july 12 and returning on august 10. between those dates, my travels will be very wide-ranging, so i’ll be frantically preparing for the next two weeks.

i’m heading first for knit nation in london, where i’m looking forward to a reunion with my UK peeps from the knitspot groups as well as cookie and alice. i’m teaching a full weekend of classes and we’re also sponsoring the charity bingo party on saturday night, for which i’m totally pumped.

after knit nation i’m hanging out with alice for a little R&R, some serious knitting time, and maybe some travel (THAT should be a barrel o’ monkeys), until it’s time to take off for sock summit in portland, OR. heh, that’s gonna be one long flight!

i’m getting in to portland a couple of days early to shake off the jet lag, take a class at pico accuardi dye works—so excited.

i’m also looking forward to seeing gail (gail, are we having dinner one night?) and giving her a big hug in person, as well as wendee, janel, and jocelyn, among many others who will be summiting that week.

i’ll ride out of town with janel and we’ll head into the sunset to her lovely, quiet home in oregon. we are hoping like crazy that david can meet us there for a few days, but that will be just a few days before the first shipment of our club goes out, so we’re not sure about that yet.

and after that, i’m going straight to san francisco, where i’ll hang out with cookie some more. we are teaching a weekend of classes together in berkeley at a verb for keeping warm—signups are open right now, so check it out.

whew, that was a long list; thinking it up and looking at it again is kinda scaring me—especially that july 12 date, ACK!
since it’s now pouring torrents of rain and i can’t walk or ride it off, i think some knitting is needed to calm my brain. 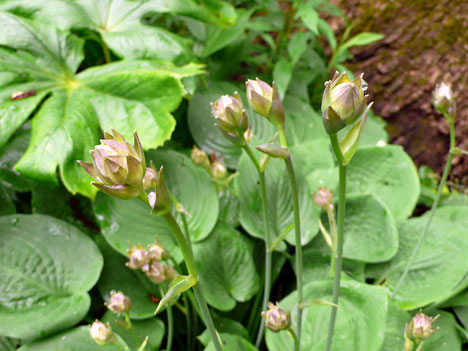