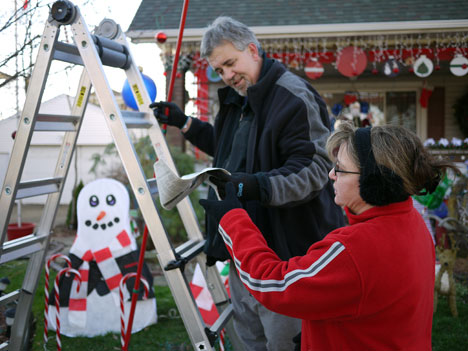 many, many of you have come to know and love our neighbor bret over the years for his fantastic and much-anticipated holiday light displays. and those who are new to us this year will hopefully appreciate what is about to unfold before you, for bret puts many hours of time and thought into his particular brand of holiday entertainment.

this year i recorded the process of putting the light show together, beginning a couple of days after thanksgiving. the entire front of the house had been stripped bare of halloween and thanksgiving decorations, the pumpkins out away, and the porch swept clean. 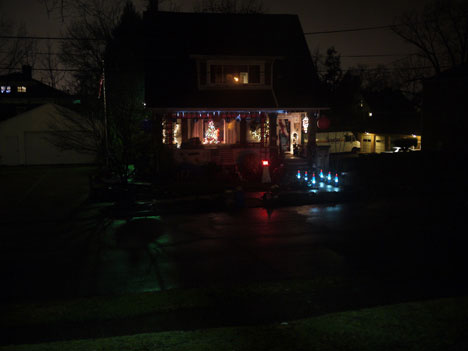 monday, november 28th
the tree has gone up inside the house and few lights put out along the walk. bret tests the blue icicle lights that will be the background of the porch roofline. there was some sort of gap in the blue lighting at first, which he later corrected. 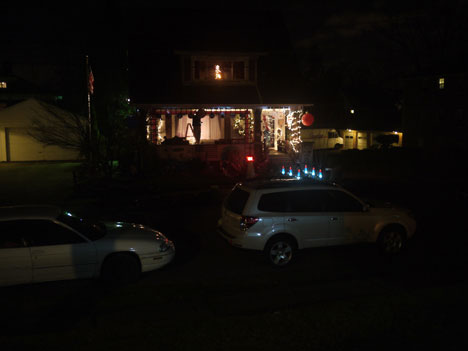 tuesday, november 29th
bret lays in a layer of white lights along the roofline and begins to wind garlands around the porch columns. this is one of my favorite photos because in it, bret is up on the ladder, actually hanging lights. some large christmas balls have also been hung. 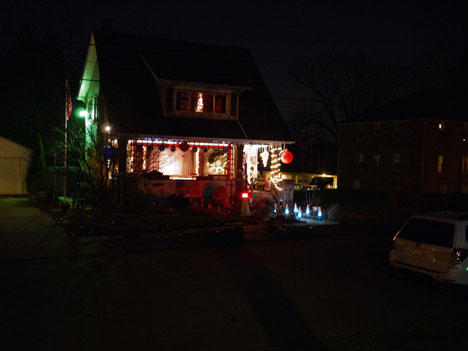 wednesday, november 30th
white lights are up and a red layer is added (bret and connie are very fond of a red, white, and blue color scheme). i noticed that bret did a lot of his work at night, when he could see exactly how the lights would look when lit. 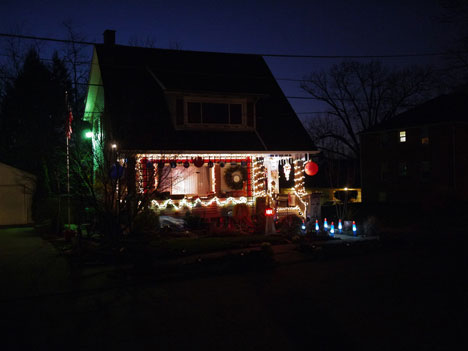 thursday, december 1st
by early evening, when the house was lit, i saw that garland had been added along the front of the porch rail, probably the night before. you can see from this photo that the sky wasn’t quite dark yet, so work had not begun for the evening. 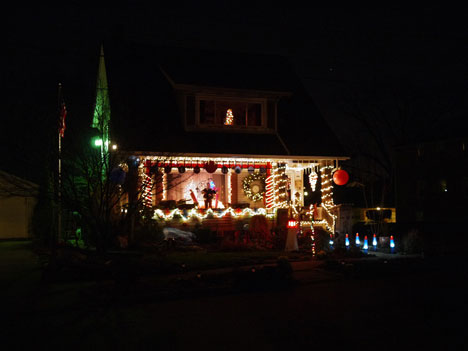 but by later on, the large wreath was lit and santa has appeared front and center as the the main attraction of the show. the columns were now fully garlanded with strands of pine and lights. 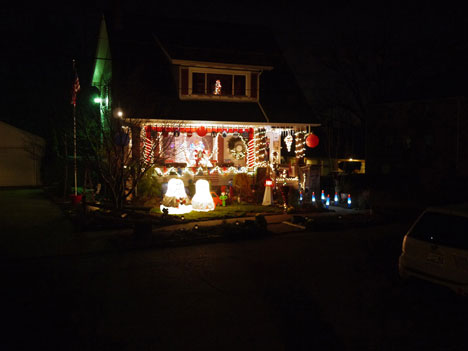 friday, december 2nd
once the lights have been hung to set the stage, bret begins to add the dimensional elements of the scene by bringing out the life-sized elves, snowmen, and reindeer to arrange in tableaux between the house and the sidewalk. santa’s throne is now lit and a small tree also appears in the uppermost window of the house.

you can’t see it in the photos, but santa also dances—activated by either noise or movements on the porch, he shakes from head to toe like elvis, which sets the surrounding light strings in motion along with him. hilarious! 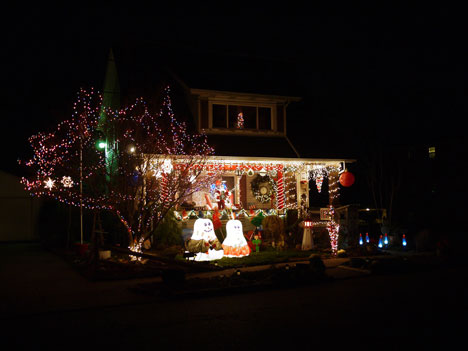 saturday, december 3rd
the race is on—bret was out there in it all weekend, filling in with more characters and more lights, which were strung throughout the tree branches. the difference is amazing 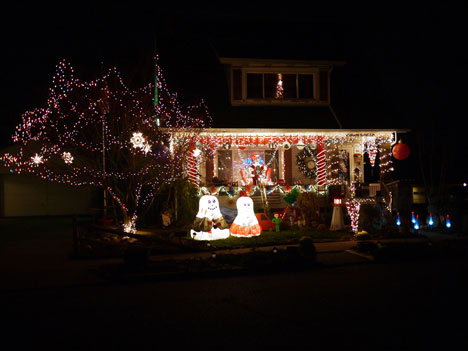 here’s a full frontal shot; you can see how the tree lights make the display look so much bigger. 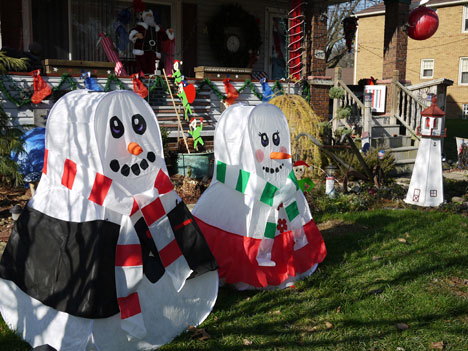 the cool thing is that there is plenty to see during the day too—it’s a real conversation starter with the neighbors and passersby. even the dogs love it (or maybe they especially love it) 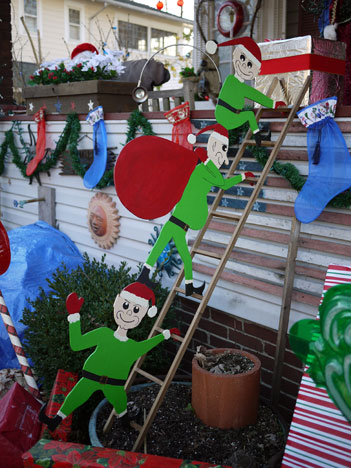 in the daylight hours you can see more of the handcrafted details that go into the decorations. bret has created a number of hand-painted the pieces for the tableaux, many from found objects and salvaged materials—some from stuff that came out of the walls of our own house.

while the elves are mischievously adorable, these christmas balls have always been a personal favorite—each one is different and homey, with tiny details you have to look closely to see. 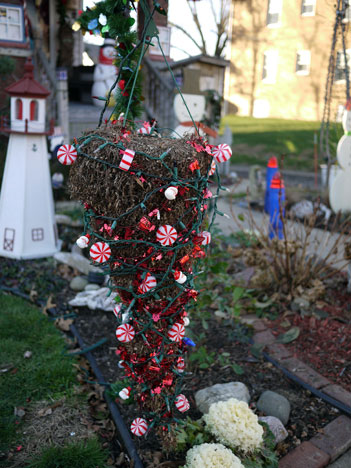 this piece is made from the dried out husk of the vines that climbed all over his porch during the summer and fall. 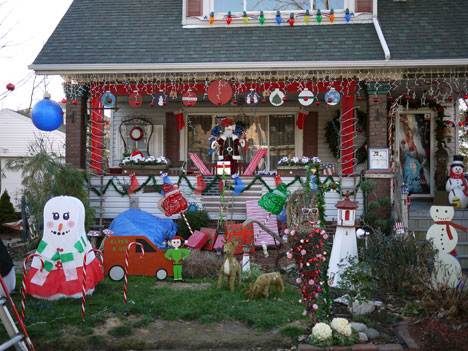 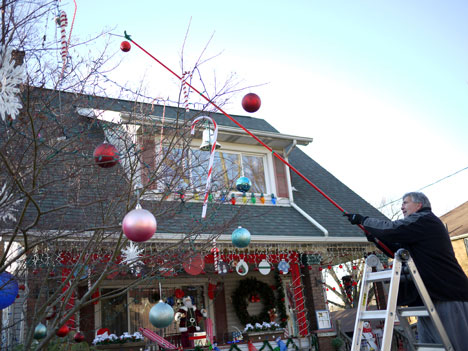 saturday, december 10th
the next weekend was the final push and it was the coldest weather of the year so far. i had to hand it to connie and bret for braving the cold both days to put the final touches on their yard. 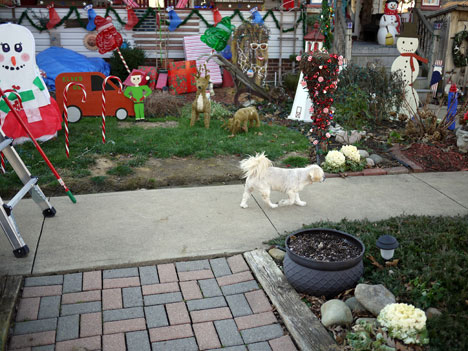 even lucky helped out. connie showed me the pictures of their house that appeared in our local paper; she couldn’t be more proud of them. 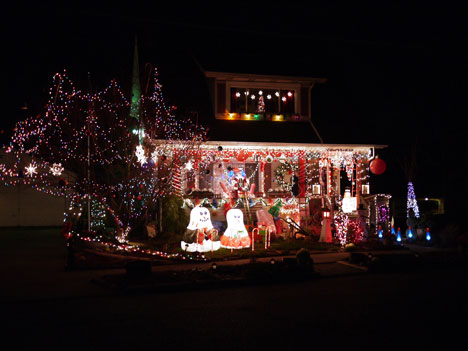 finally, all was set and we’ve been enjoying the results ever since—and now you can, too. thank you bret for a fun and vivid reminder of holiday joy each year; we appreciate it!

from us to you, our much simpler, but no less sincere, offering 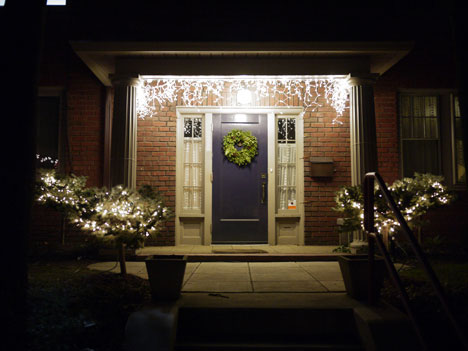 a happy and peaceful holiday to all!