and so it begins—we had our first snowstorm of the year over the last couple of days.
at first, it looked like it was going to be one of those 48 hour dustings, where the snow falls lightly enough and the wind blows hard enough that nothing ever accumulates, no matter how long it goes on.

but then yesterday, while i was putting the final touches on the final secret project for our 2011 fall in full color club, it started to come down much, much harder 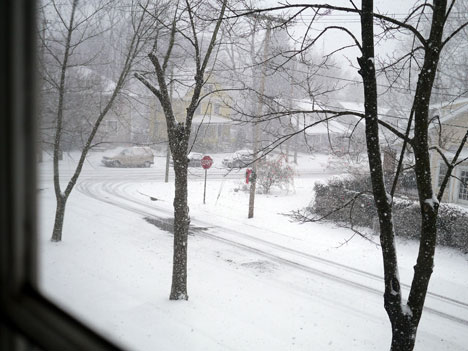 so that, at times, we could hardly see across the street. this set down a good few inches all around, finally covering the grass and dirt completely. not enough to bring the city to a standstill or anything, but plenty to quiet things down for a bit . . . you know that sound—the sound of everyone staying right where they are for just a while?

i love that sound.
it’s not unlike the sound of a room full of knitters knitting.
(as a teacher, i get to hear that sometimes). 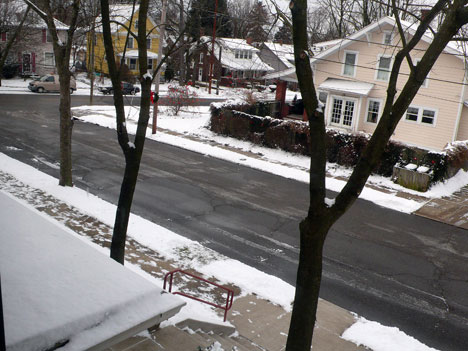 everything is pretty much back to normal today—you can see we didn’t get all that much (ohio is way more temperate than some places i’ve lived). but still, a nice accessory to the winter scene. i’ll find out later today how this will affect my running schedule; so far, i know that cold and wind are not much of an obstacle and i’m hoping that the snow and/or ice won’t a deterrent either.

anyway . . . let’s go back to the title and see what i’m up to in the knitting department; i think you’ll get a chuckle out of this one. 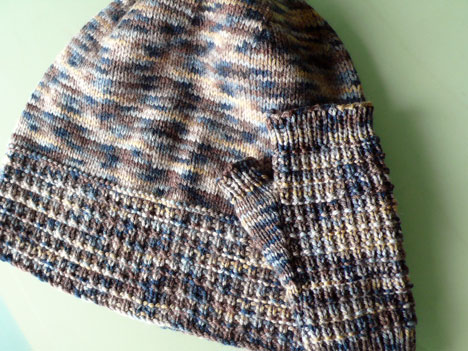 ok, so i’ve got a new delicious hat in the wonderful shalimar honey worsted and i think i’m even going to get a pair of fingerless mitts out of my yarn supply to match. i finished the first one last night and there might just be enough for another. 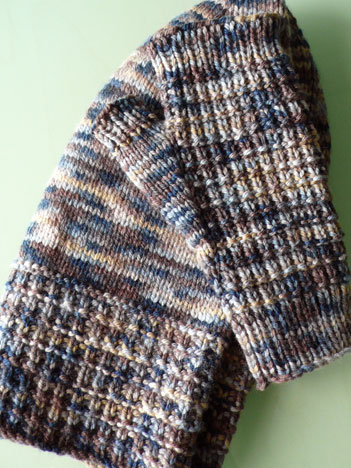 i started writing the pattern up and it’s a funny thing, but with my filing system (and my compulsiveness), one of the first things i have to do (if i haven’t already) is settle on a name, so i can create a folder and all the files that go into the pattern. occasionally i change it later, but i prefer to get a permanent name squared away at this stage because it does set the tone for the publication and marketing of the design. the hunt can take an inordinate amount of time, often way more than i planned . . . but usually worth it.

anyway, this being a slouchy hat, i went to ravelry to see what else is out there and of course there are a ton of designs with the word “slouch” incorporated somehow. i keep going back to the hats and other knitwear i saw in girl with the dragon tattoo last week—i’m a little haunted by them, actually—so i thought to myself, maybe there is a swedish word i can use for the pattern name.

oh, is there ever swedish word alright
(and i think our good friend malin can guess what’s coming)

if you thought fartlek was fun, how about this one: slöfock

omigosh, how can i NOT use that??
i told kim already today that i’d do it for no other reason than to make her and kat carry on like the 10 year olds that they are. 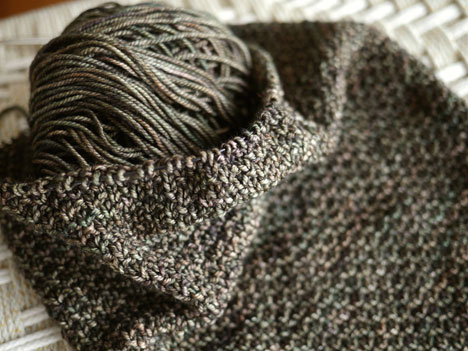 david bought a new and even better lumix camera for us to use for our videos and photo shoots, with the result that i keep using it for blog photos too, haha. i love my smaller, lesser camera for it’s portability, but wow, this one?? this takes awesome photos when i’m home to use it.

what we have here is a beautiful closeup of the woolen rabbit sporty kashmir i’m using for david’s new sweater, in colorway enchanted forest. it is such a gorgeous color, neither green nor brown but magically, both at the same time. and it just went live in kim’s store. 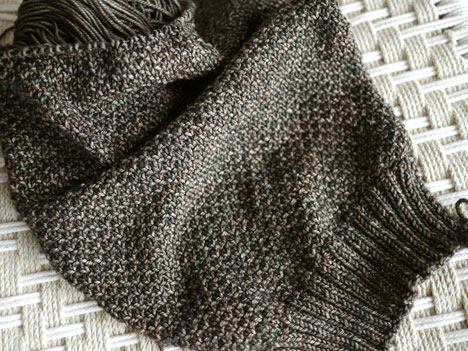 i’ve got the first sleeve knit almost to the underarm now; with another evening’s work, it will be off the needles. it’s going pretty quickly for a finer weight sweater in a man’s size. 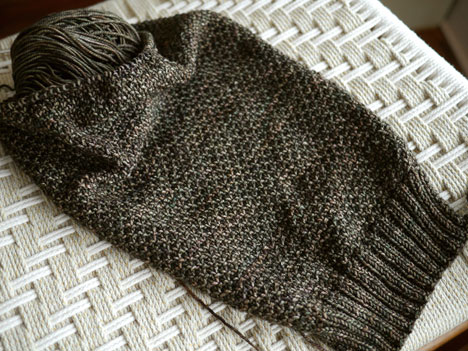 the pebble tweed texture is really appealing for guys—not too heavy handed, yet still textured enough to read as rustic or rugged. it will have some minor cabled detailing as well.

ooops, david just came in to say that it’s time to go to the dentist, so i gotta fly—be back in a couple days with more!