now i have two socks at the same point with slightly different pattern placement. the second sock is on the right; you saw the one on the left the other day.

i like them both a LOT, but i think i am going to go with the one on the left, with a few pattern modifications. i think i’ll start the lace pattern just a little higher on the foot, because everyone doesn’t have my size feet. 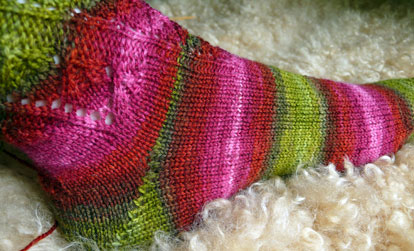 and i like the ankle area on sock #2, with the staggered patterns; they form a nice point at the ankle because of that.

and i love the back of the heel 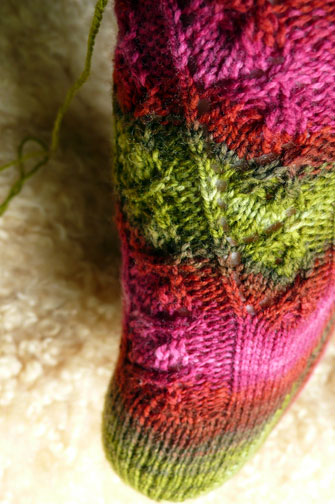 with one motif alone trailing up and the the ones on each side coming later.
i stopped knitting sock #2 at a different point in the lace motif and the edge is not nearly as jaggedy-scalloped as sock one was in the last post. 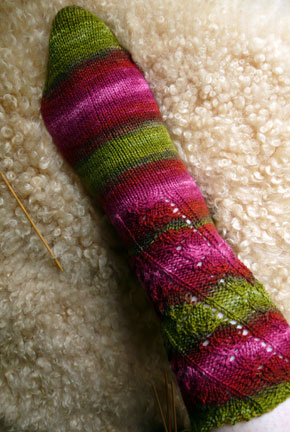 that means i could add a little eyelet rib or something and it wouldn’t buckle in a funny way. it would make a nice ending i think, and he sewn bindoff would work well there.

so, i think i need to write up the pattern i now have in my head and knit a third sock from that.

i don’t have much else for you . . . this arrived today (in pretty bad condition) in my mailbox. 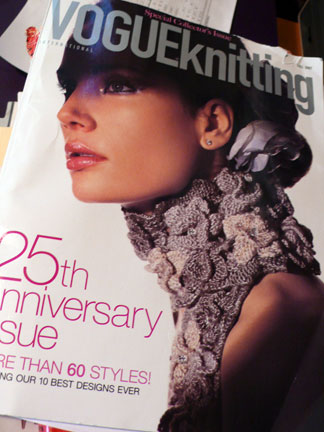 they decided to start using a MUCH thinner and less protective plastic wrapper just now, for their heaviest issue ever??
the issue is ok, and very full, but some of the photo stories make the garment details and stitches really hard to see. between the over-accessorizing and the strange lighting and photo editing, it begins to be a big departure from a knitting magazine.

don’t get me wrong—i have supported this magazine for years through its ups and downs for sure, and i’ve always believed that knitting needs a magazine that is largely about style and trends, as well as magazines that are more practical.
i’m just not a fan of confusion on the page, no matter what the topic, and i wish they would stick to trendy clothes and forget overly trendy photography.

and just one last . . . this, i cannot help. that BAG that pops up in all of their retrospective issues (p 134 in this new one) is really on its last legs and should NOT be resuscitated again. event the model looks pained to be wearing it.

it was sorta cute the very first time they ran it (1989), designed by marc jacobs for perry ellis, in feather-light mohair and shown over tights.
they have re-run it two other times that i can think of, less and less successfully. by now it has been redesigned to the point where it is but a shadow of its original self. the “design” doesn’t belong to anyone anymore and it sorta shows.

the thing is, this is JUST the kind of item that gives knitting a bad name, and is almost sure to disappoint the knitter, either by its weight, or the weight it adds to the body, or by the way it grows.

ok, rant over. i don’t really like to go there anyway. there has just been SO much more brilliance in that magazine over 25 years . . . we should be celebrating THAT.

25 thoughts on “two are better than one”