that was us, all weekend long. 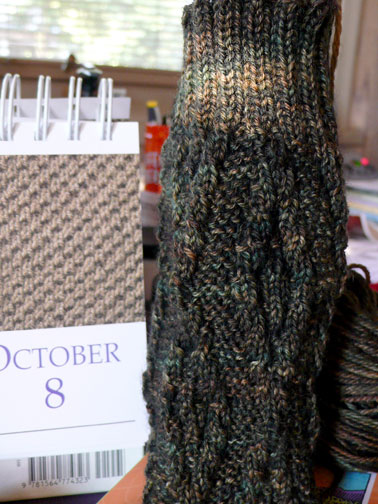 i’ve got these to the start of the heel and i’m thrilled; they will fit perfectly, and be just a tad shorter than the ones in the heavier yarn.

again, i’m just scratching my head about why that is . . . but even the super-picky debbieKnitter agrees that the gauge is fine (and she loves this yarn too . . tried kidnapping it from my house saturday, but i was on to her ways).

we had a very busy weekend; david was scrambling to get all the windows that would be receiving storms ready for this morning’s invasion of workmen. 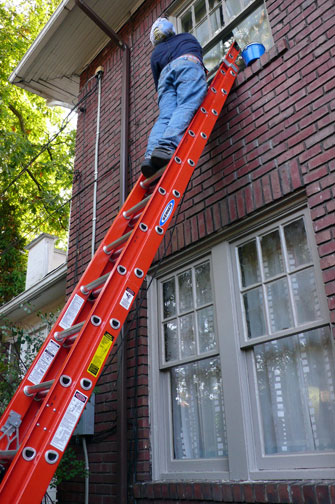 (please don’t ask me how it feels to be inside wondering when i’ll hear a big THUNK. i’m trying to be calm and trust that he’s doing things safely. but really now, he’s 30 feet up on ladder in the hot sun; how calm am i supposed to be??)

as for me, i spent a lot of time in the kitchen trying to get on top of the load of produce we have gleaned from our garden over the last week. it is hot here (90s the last few days), and stuff is coming in by the basketful again . . . another head-scratcher that i don’t even have time to contemplate. 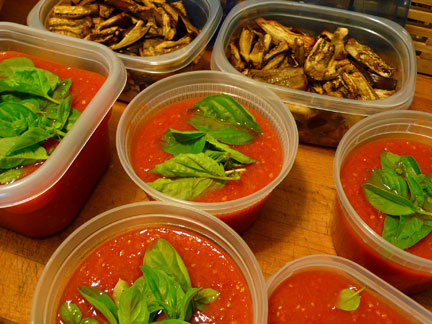 lots of tomatoes, squash, peppers, and a big bag of eggplant from the generous nikki, a student of mine. everything got roasted, cooked, or stewed up into something good that we’ll enjoy over the winter. like ratatouille

this is one of david’s very favorites . . and it’s really delicious made with very fresh veggies in season. even if i freeze it, it will taste better than if i made it with stuff from the store, when we take it out to eat in january.

i also did some design work, but i can’t show you that; all will be revealed sometime in the near future . . .

on saturday debbieKnitter came over. we have not had a get-together all summer, which we have vowed not to let EVER happen again. and we had SOOoo much fun that i forgot to take pictures. no big loss . . . mostly, she shoveled stuffed peppers into her mouth and ripped out a mess in her sock. i swear, she picked up five different projects in rotation and worked on each for about 10 minutes. i just watched, fascinated.

i worked on cluaranach and managed not to make any mistakes (it’s hard to knit when you have laughing tears in your eyes for three hours straight). 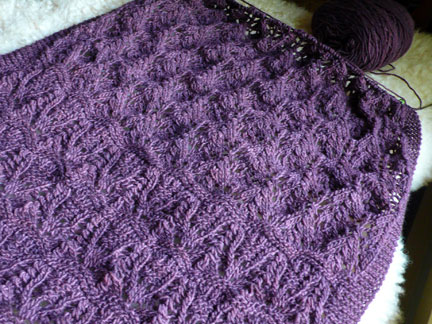 this yarn is such a treat, really and truly. another piece that debbie tried to fenagle out of the house, but i managed to catch her before she got to her vehicle. she can get her own damn kit, or ask for one for thanksgiving (she won’t be able to wait for christmas, trust me).

and, on saturday night i got the last of the knitting done on my red sweater . . it is now off the needles and blocking. i promise i will show all the red sweater news in its own post either tomorrow or wednesday.

sarina from moving mud called on friday to say that the buttons are done and on their way; what about that timing, eh?? she says she did something a little different than what’s on the site (they always do) so i’m anxious to see them.

i also can’t WAIT to get that sweater on my body and see if it fits. i had a few moments during the blocking when i wondered if i would like it on. i think it might be a bit looser than i wanted. everything is the right size according to the pattern, but i’m worried that i made the pattern a size too big. long story but, suffice it to say that i keep thinking of myself as the size i was 10 years ago, and i’m not.

21 thoughts on “workin’ for the weekend”