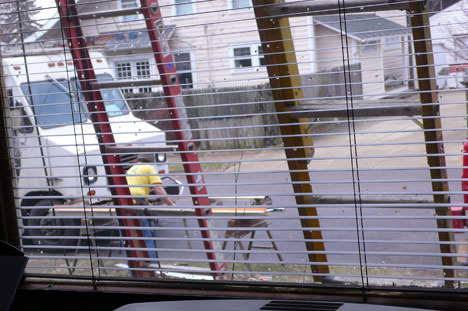 ok, no, i’m not spying on the guy working out on the sidewalk.
i might be spying on all the guys out there, though 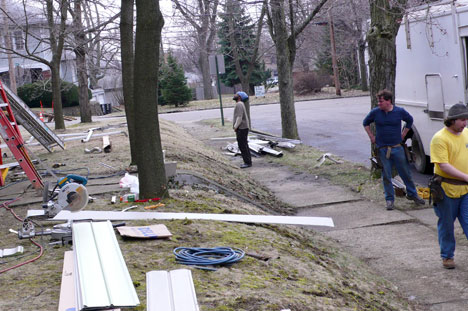 what a mess—can you believe i’m paying someone to make my yard look like this?? 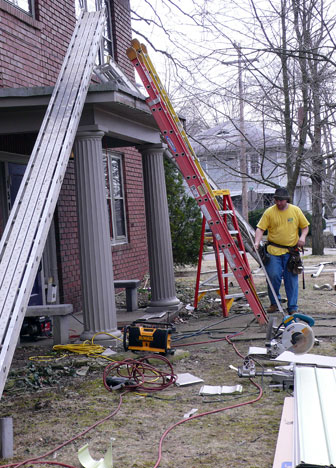 (although, for sure, it’s not as big a mess as the roofers made)

it really says something when you and your beloved save doggedly for the giddy day when you become the owners of all new gutters.
i think it’s a signal, not that you own a house, but that the house owns YOU.

(be that as it may, we are still giddy over the gutters. do you realize what this means for the health of our basement??) 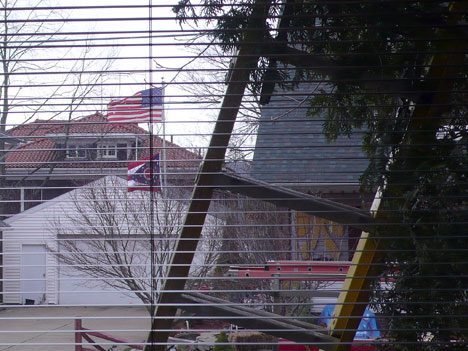 one thing though—it’s really windy outside (see the flag?). now, in my mind, high winds and ladders don’t mix. the men seem unconcerned 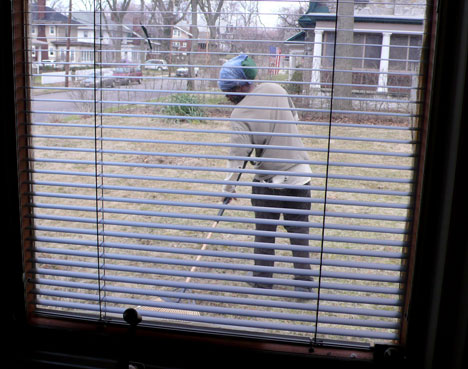 (i don’t know why he’s raking when it’s so windy, but i’d bet money that it’s a cover for being able to watch the gutter guys work. not to supervise—david’s not like that—but just to see how it’s done. and, guys working beget guys working . . . . or watching . . . i find.).

so anyway, i’m opting for escapism; i have no interest in watching a guy blow off a ladder, or watching a ladder get tossed through my office window.

and what better way to escape than to sink oneself into a pile of yarn?
as it happens i actually have a pile of yarn. fresh, too—yesterday the mail goddess descended with two boxes and an envelope. even she was a little dizzy from the fumes. but i was too busy with classes and running around to open them til this morning.

the first box was from kim at the woolen rabbit, filled with her laceweight yarns, which i hadn’t tried yet. 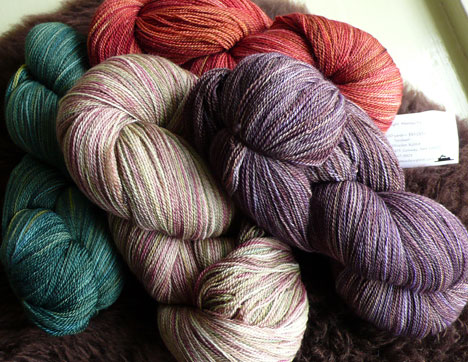 but i remembered it when i was swatching last week. i asked her what she had laying around in laceweight; i was looking for something surprising to use for the large leaf lace pattern we all like so much.
oh, she just happened to have a brand new colorway she was experimenting with. 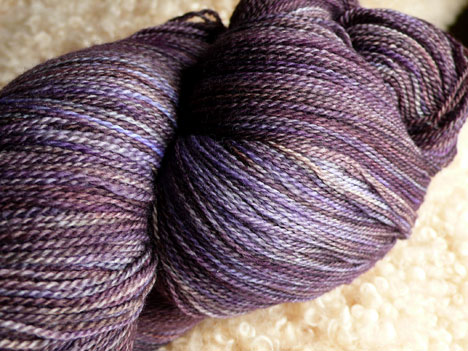 mmmm. it’s got plum, it’s got brown, it’s got a little green, a little gold. we love it—this will be something. if it doesn’t work with that large leaf pattern, it will become something. mark my words.
she also tucked some roseamary thyme, a new deep green (yet to be named), and the moroccan spice colorways into the box.

as if that wasn’t enough of a yarn hit, i also got a box from catherine at knitting notions.

i first met catherine a our local fiber festival early last summer, and fell in love with her super-soft merino and organic cotton yarns on the spot.

we started talking about working together a while ago, and now that she’s getting ready to start her summer show circuit (look for her booth at a fiber festival near you), she’s got some new colors and has restocked all the favorites. 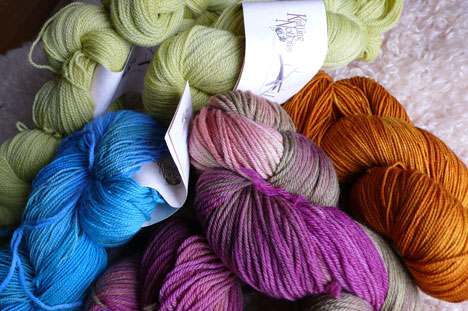 i picked a couple of sock yarns, a lace yarn (in pear, mmm, yum), and some worsted for various upcoming projects.
but it wasn’t easy; catherine has an awful lot of really, really nice colors, both semi-solid and handpainted. well worth a visit to her site or to her booth.

let’s not forget about the envelope that came—great things come in small packages, too.
these samples are from jill at riverwinds farm, purveyor of cormo and icelandic gorgeousness. 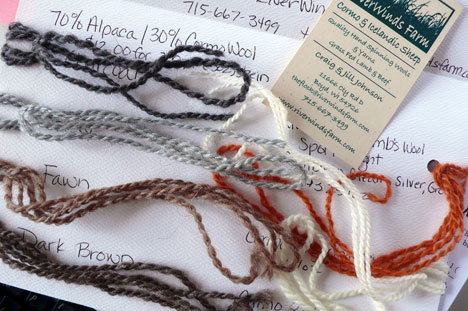 now, i have an admitted weakness for cormo, which i try to hide by splitting purchases of fleeces with friends. it doesn’t work—i have accumulated at least two or three large boxes of the very stuff in my fiber closet. really, all one has to do is whisper C-O-R-M-O in my ear, and i’m like, taking out my wallet as my head swivels helplessly and my mouth says, “oh yeah—where??”.

(and so no one should feel left out, cormo is the super-soft wool of a sheep breed whose lineage descends from a corriedale/merino/lincoln mix, and features many of the strengths of those breeds.)

so it’s no surprise that i have nearly worn through these samples with rubbing in the less-than 24 hours i’ve had them. the ones on the left are an utterly to-die-for blend of 70/30 alpaca/cormo that is pure genius. much as i love alpaca, i do find it a bit prickly, and sometimes i wish it had just a bit of bounce. well the cormo adds all that and more; it’s rich and buttery with a nice twist. not lax the way pure alpaca can be.

so if you love pure-breed yarns and artisan fibers, check out jill, also at a fiber festival near you.

ahh, that really helped. i feel less anxious now and i think it’s time i went off to knit on this 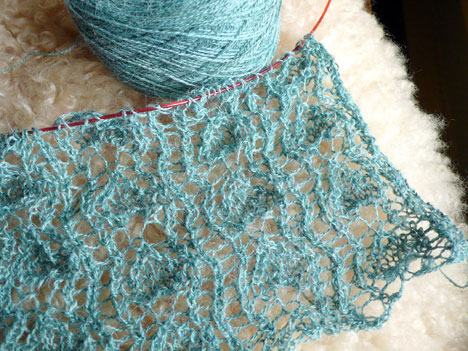 love it. i kept meaning to restart that sock, but then i’d decide to knit one more row and forget.
i love it so much that i started another one too. 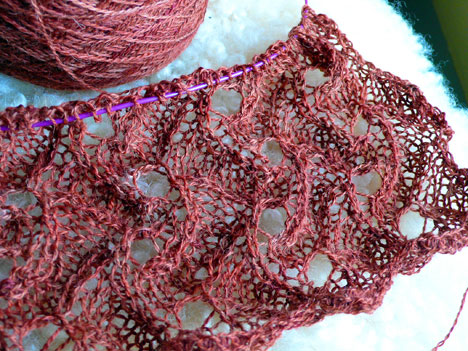 you know how addictive these little carves are.
but still, i do want to get back to work on a sock tonight. i’m waffling though . . that mediterranean blue-green yarn of catherine’s keeps waving its yarn ends at me.

38 thoughts on “the gutter life”