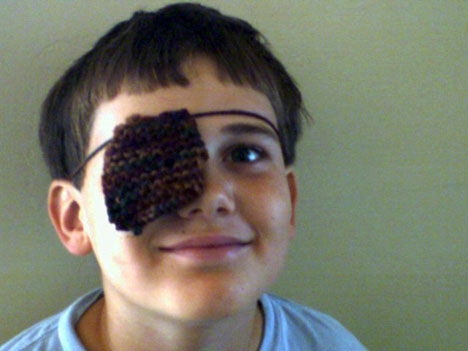 this is sam, another san diego knitter (and another of kim’s sons), posing with his hand-knit pirate patch. he made this for a friend’s birthday gift last year and it was so popular that he had to take orders for more.

today i am distracting you with sam’s knitting because mine looks pretty much the same as yesterday (i worked on the shawl last night, but proportionally, the amount i knitted doesn’t look like much . . .)

sam started knitting in october 2006, when he was 8 years old. his first project, a scarf for the hamster, seems to be lost to posterity, but photos of a few others survive, thanks to kim (ah, mothers . . . what would we do without them??). 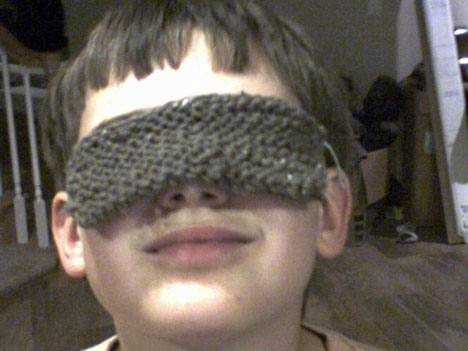 then there was his sleeping mask phase, which also proved popular as a salable item (who knew??).

sam took an interest in knitting during a discussion about the vikings, and how they knitted during long voyages. kim explained that there have been many male knitters throughout the life of the craft, and he liked the idea of joining the ranks. and because it looks so cool, too.

he doesn’t always break completely with tradition, however 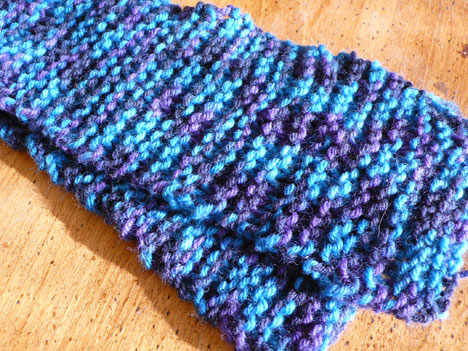 everyone needs a good scarf, after all 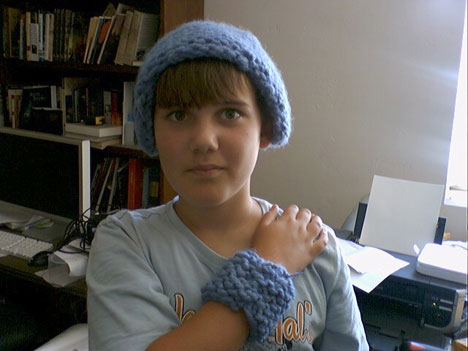 he couldn’t figure out how to close the hole at the top so he made it into a ponytail hat (i love the creative problem-solving here, instead of asking mom to do it). i think this kid has a future in some sort of mechanical design field.

sam likes working on circular needles, and next made another hat for his brother cole (of the volleyball), for christmas last year.
he hesitated to model it because it doesn’t belong to him, but i talked him into it 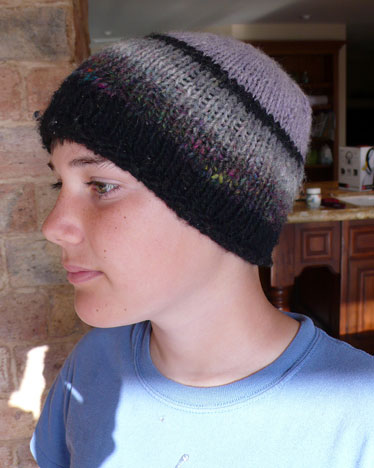 (i know. not bad looking at all, eh?).
and i do believe he will knit green ham and eggs some day.

currently sam’s knitting is in a bit of a lull; he started this blanket during the winter 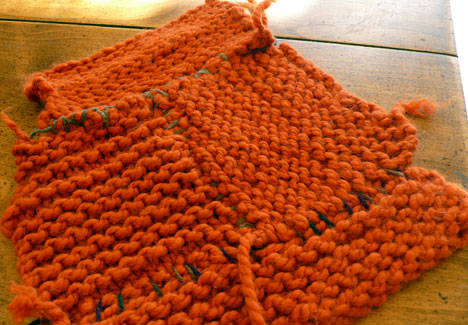 yesterday we did some more exploring around san diego (which is why we conked out so early last night and didn’t get much knitting done). before i got here, kim did a 20-mile urban hike with some kids and she planned an abbreviated version for us to do together.

we started in balboa park, and apparently, i was so enthralled and busy looking at everything that i forgot to take any photos there (duh.). it has been years since i was last there and i’d forgotten what an amazing array of beautiful buildings and plantings the park has—and i have to say, it’s looking a lot better these days than it did back then. there are literally endless things to do and see there—you should go if you get the chance. 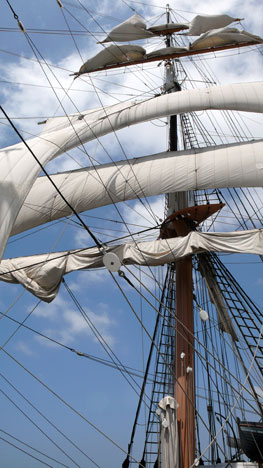 from there we walked down to the embarcadero (the waterfront) where we cruised the boardwalk, which features changing scenery and roadside attractions all along the way, including some snazzy airplane tricks. 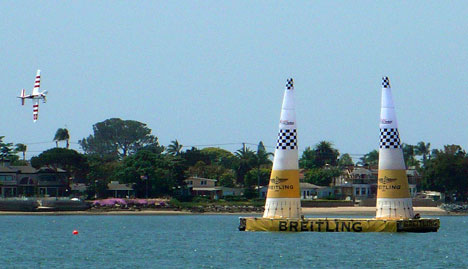 the red bull air races are this weekend and we got to see the trials and practice runs as we walked. we won’t go to the races because we are attending an important summit of like-minded compatriots and peers on saturday (otherwise known as lunch and shenanigans with other knitters; and there might be a yarn store involved . . .).

sculpture of the day 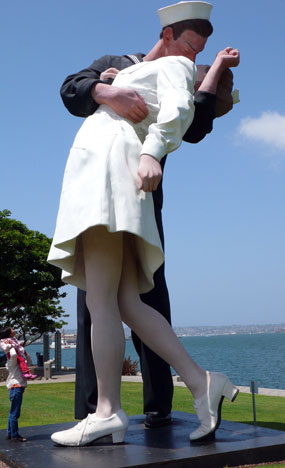 i just love this; it reminds me of david (not literally, but you know, the general joie de vive of it).
then we turned in the other direction and saw that lace is, indeed, everywhere 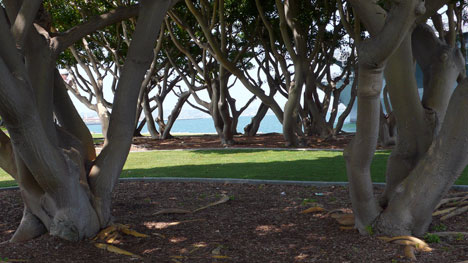 after the waterfront we headed up through the gaslamp district to wend our way back to the park. this is a charming old quarter of the city with beautifully preserved buildings 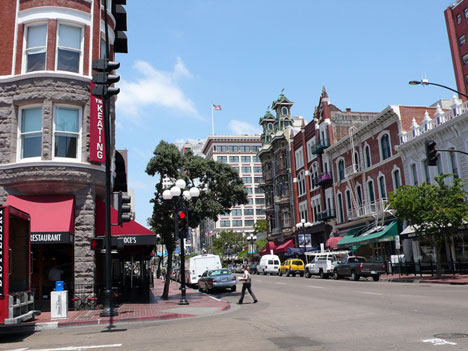 it’s interesting to see older building in a climate where they suffer a little less wear and tear from the weather (i was struck with the same reaction when we were in austin recently). the stone, brick and clapboards seem to maintain crisper lines on the edges and in the ornamental details when not exposed to snow, ice, and wet conditions, even though other harsh conditions are present (like wind and sun).
if the buildings were not so obviously built with a different quality standard at work, and the evidence of actual hand-wrought processes, you’d think they were new.

we stopped to eat indian food for lunch, and had the opportunity to meet this gentlemen 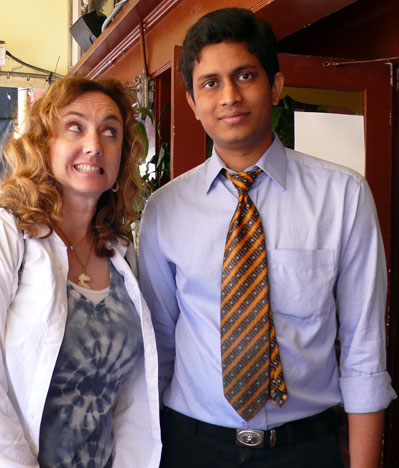 if you feel you need to be talked out of what you were sure you wanted for lunch—anytime—he’s the guy to see. seriously, no matter what you wanted . . . you didn’t. and he knows it.
hehehe. it was a good lunch though.

we stopped in little italy to pick up some items at the mona lisa italian grocery; i cooked dinner for the family last night (with the help of kade and sam). we picked up fresh angel hair pasta, olives, cheese, anchovies, and bread—then we stopped before we got completely carried away.

we went home where we set to work making a nice seafood vodka sauce with grilled asparagus, zucchini, mushrooms, and garlic 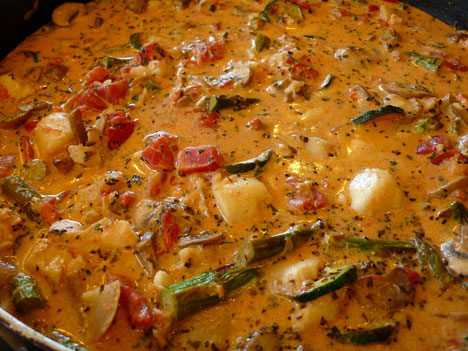 and since we had all these wonderful oranges from the yard 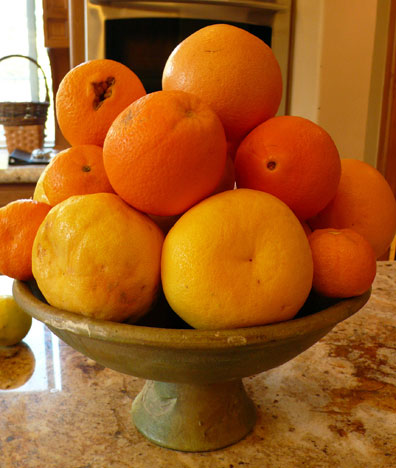 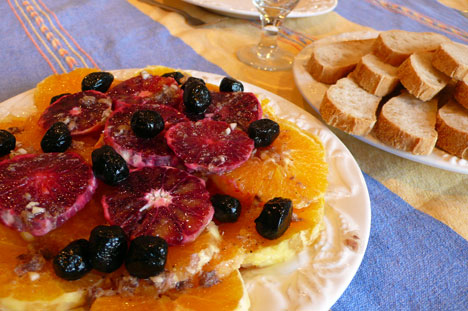 once everything was pulled together, and everyone was in from volleyball practice and various other after-school activities, we all sat down to eat 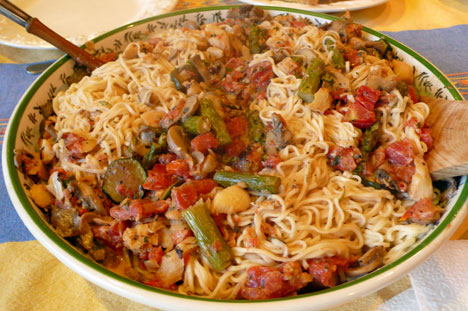 have i mentioned how much i enjoy eating with kids?? i do.