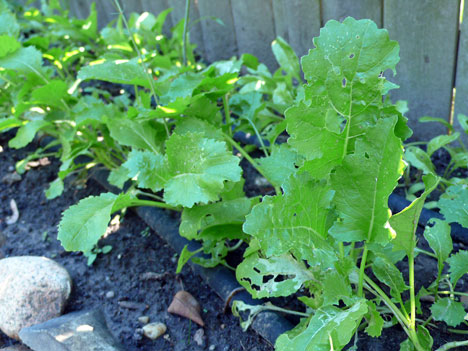 remember that line from the TV show friends?
just before we went away last weekend i was so discouraged with my garden that i sat down with it for a “talk”. i just felt like i needed some “space”, so i suggested we take a “break” for a while.
not breaking up, just a break.

david looked at me over his spectacles and went to home depot to buy soaker hose so it wouldn’t be completely neglected. 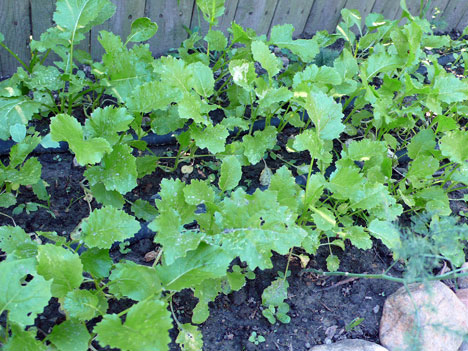 it turns out that that not only do they sell soaker hose, which already saves me an hour or so a day in watering chores, but he also purchased a timer, so the hose knows when to turn itself on. dang. we could really have used that back in may, not to mention the parched months of july and august.

and, oh, how happy the plants are. they are positively radiant from having a break.
well, not so much the tomatoes but even they are hanging in there . . . they haven’t died, and they are still offering pretty good pickings, though not like last year. 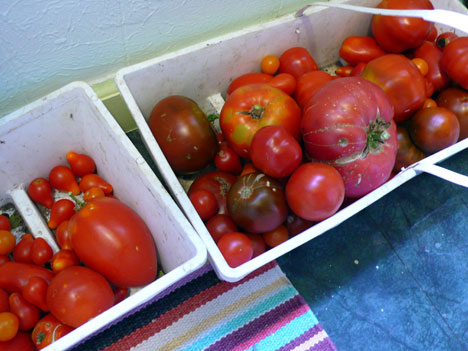 sure the bigger tomatoes tend to be ugly and a bit scarred, but they still taste good and are growing to a good size, mostly. the tops of the plants look pretty healthy; they just might make it. and the cherry tomatoes don’t seem to care at all that their lower halves are diseased and dead 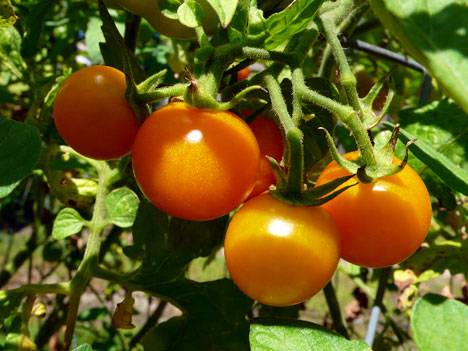 honestly nothing surprises me any more about gardening; just when you think the whole shebang is taking a complete nosedive, it starts to come back a bit. this past week i’ve put up about 8 quarts in the freezer 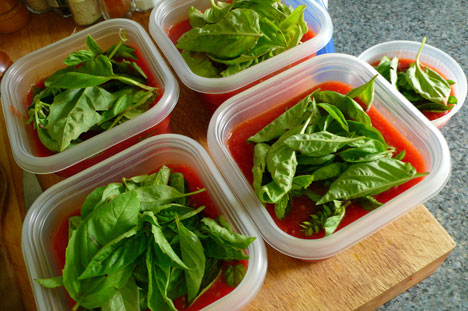 not too shabby. i’ll still scout out some backup tomatoes just for insurance (i didn’t make it to the farmer’s market this past saturday; i just could not get out of bed).
september could be a good tomato month after all; actually last year we had great harvests after labor day. 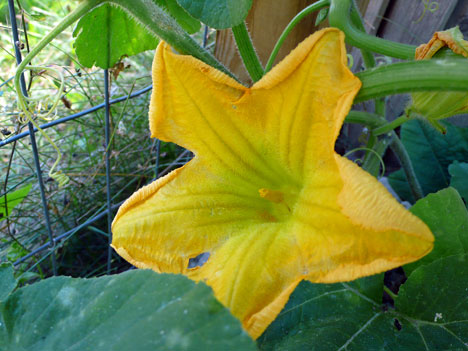 the original summer squash are definite goners but i do have a second planting coming along so maybe those will mature into real producers. and i have this one butternut plant that i stuck in a corner area that is growing to beat the band 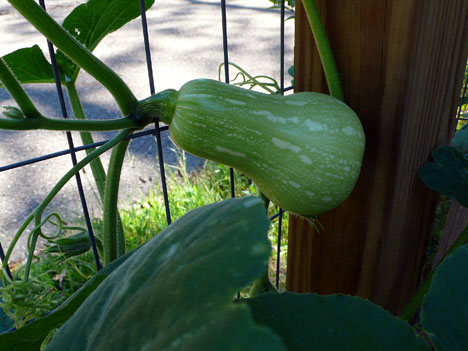 and my greens continue to thrive, against all odds (the “odds” being that i am the one taking care of them—me with my checkered greens past). the rapini (top photos) is so thick that i am a little embarrassed—you’d think i could take the time to thin it a little. but i just couldn’t make myself do that this weekend. between deadlines and garden apathy, i stayed away from the vegetables. i do have my eye on the thinnings though; we’d love a repeat of the pasta with baby rapini dish we ate in june. mm-mmm 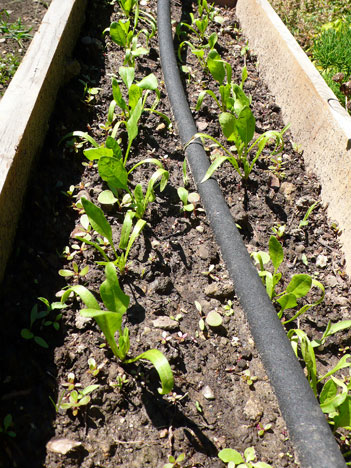 and look—that’s spinach you see growing in that box. and it’s bigger than two inches tall; we might have to frame it.
i’ve got at least one meal’s worth of new baby bok choy out there just dying to see our (so-called) dining room, and i cut a big basket of zen greens today that i’ll cook into a curry some time this week (ha—listen to me—like i have time to cook this week! ROTFL). but seriously i also have a large amount of chard that could be picked and put up in the freezer so i have to make time some time soon. 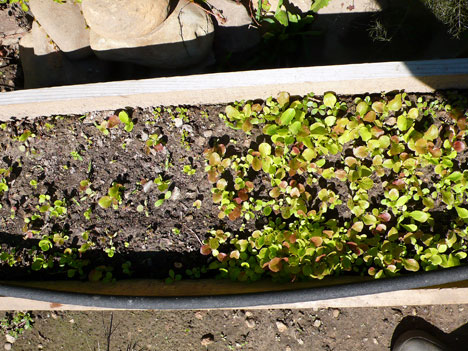 i know what this looks like . . . it looks like i set the lettuce box with one edge up an the pavement and one not, then seeded it and then flooded it with water, so that all the seeds were carried down to one end. normally, i wouldn’t put it past me to do exactly that, but here’s what really happened:
i seeded half the box with seeds from one packet and half from a different packet—i guess one type of lettuce just germinates better (heh, don’t ask me which one . . . i can’t for the life of me remember. i’m not that good, just lucky—and then, only sometimes).

so yeah, i think me and the garden might be back on good terms again—tentatively, we are scheduling a rendevous sometime later this week for some weeding and thinning. we’ll take it slow (no hoeing or cultivating; nothing to tear up feeder roots or disturb the equilibrium too much).

so what did i do on the break with all my (snort) copious free time? well, you know there has been a whole lot of secret knitting and deadlines. i’m happy to say that a couple of projects have gone out the door and the remaining ones are nearing completion.

i am swatching full swing for the next shawl and everything is finally pulling together with that (thank heavens—i was really starting to sweat that one, and even so the timing will be pretty tight)

sunday we had our regularly scheduled spinning class which has not met in two weeks and we were all so happy to be back we almost cried.

i finally, finally finished up the merino/alpaca top i’ve been spinning since the year ONE 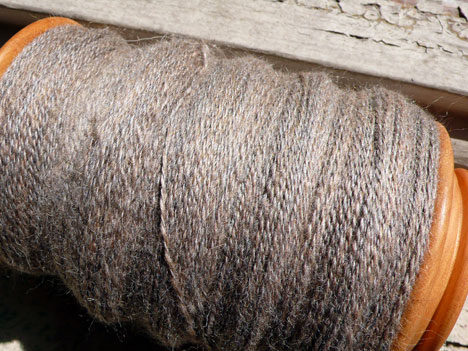 and i even worked for several hours after class to get it plied. the singles was so devoid of active twist that i really had to guess at how much to ply it—even using a magnifying glass to check the fiber alignment proved tough; the fibers are fine and not very varied. lucky for me, i had a bit of singles left after plying my two bobbins together so i made a sample skein 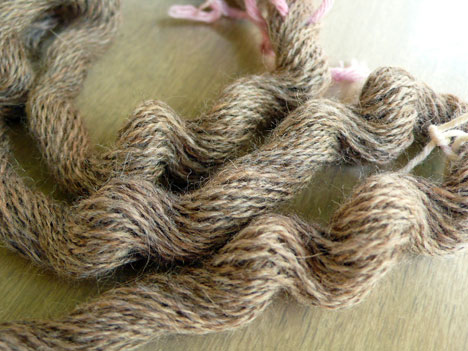 which i figured i could soak and hang to dry to see how i did. if it needed tweaking, i could run the larger amount of plied yarn back through the wheel before washing it to add or subtract plied twist.

but i didn’t have to. it hung straight and true after washing, so i went ahead and skeined up the big bobbin full 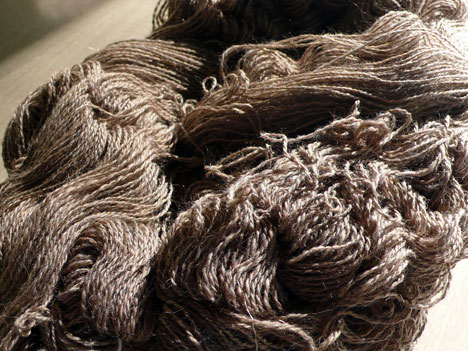 (doesn’t it look like it has a wicked amount of overtwist?) and set it to soak. the fiber has a really nice sheen to it and, like most just-spun fine yarns, it felt a tad wiry. so i tried out my unicorn fibre wash and fiber rinse duo this time for soaking and washing (i learned from knitter’s review this week that the rinse really does make a difference, so i was eager to try it).
it worked a treat 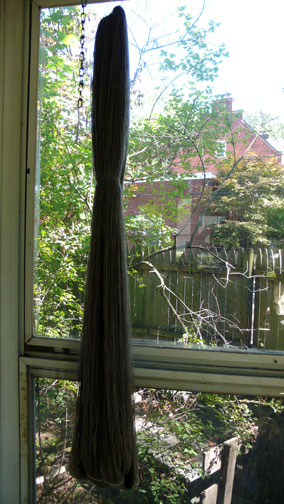 my skein fell straight as rapunzel’s hair and was soft and gleaming to touch. the big skein is still drying but the sample skein is light as air and not wiry any more 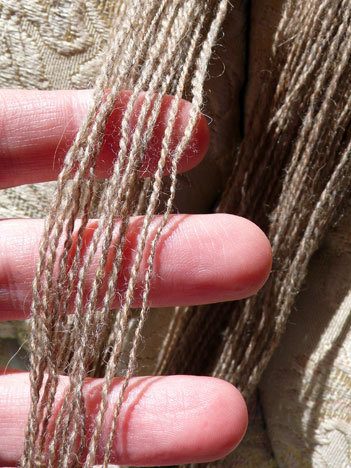 i love this yarn . . . it’s not as consistent as it could be, but it will knit up nicely into something lacy. i’m a little disappointed in the yardage but i think i got my hopes up too high based on how long it took me to get it spun. still, i have 800 yards, and that will knit up into something of a nice size.

ok, now, it’s late and if i’m going to have actual knittng to show you tomorrow i better get cracking.