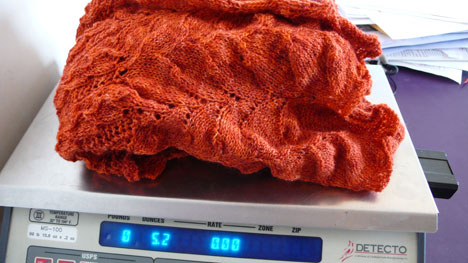 it’s off the needles—finished up the shawl last night instead of working on the pattern, because i realized i couldn’t finalize things til i knew how the necked worked out.
also, i’ve picked up some kind of sore throat thing and by 7 pm, it was all over between me and the computer; i needed to huddle someplace warm (good luck with that) and knit. 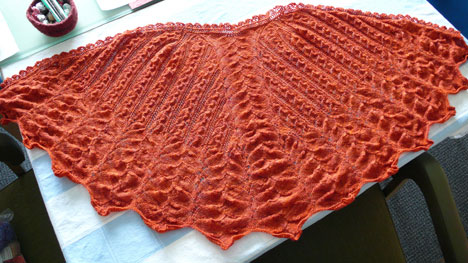 i took this picture this morning while i was measuring it all over pre-blocking. then i put it on for a good soak while i did my bookkeeping and around noon i started pinning it out 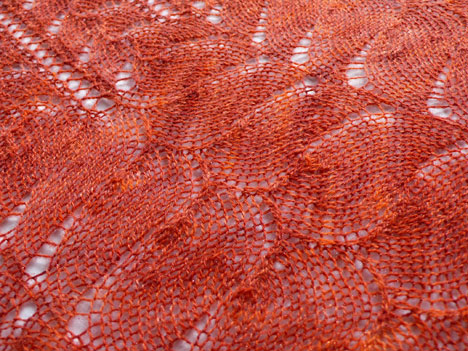 the yarn has such wonderful coppery highlights and streaks of dark red that give the fabric a moiré or watered-silk effect. 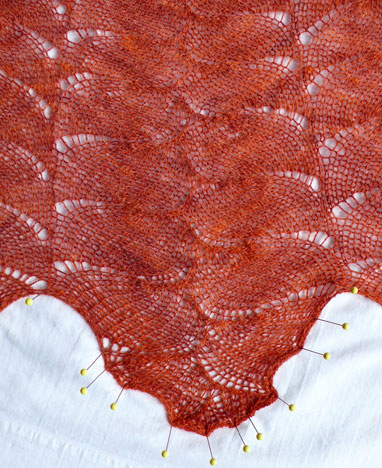 i pinned out the hem scallops by hand instead of using the wires—they really needed to be able to spread and round out more than the wires would allow, due to their size. i opted for an organic, asymmetrical shaping on those (but you can mold the fabric lots of different ways in the blocking) 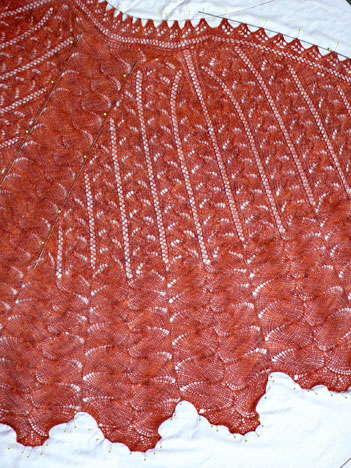 the shoulder shaping looks like the windows of a gothic church, heh. 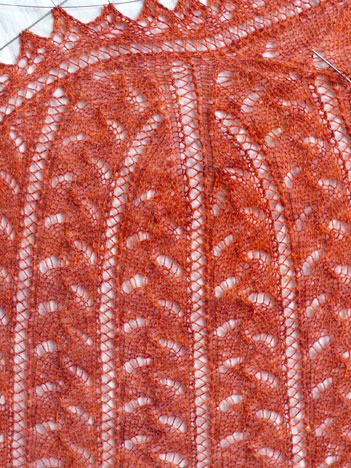 i do like the way they turned out—it was worth the struggle i had, getting that shaping to work out on paper (two days of staring at the screen to make the numbers work, ugh, can you believe that?? ok, i was coming down with something, but still . . .).

the problem was that central column of faggoting—i wanted that to run right up the center of the shoulder, dammit! (btw, if you clicked that link, try this one, too—absolutely fascinating—the things you can learn from knitting . . .)

but it was throwing the section on either side off kilter, so that that they weren’t centered. and, as you can see, the patterned panel is not a symmetrical motif either which threw another monkey wrench into the mix. it was either make a chart that was 110 sts (about 20 inches) wide or think of something else. well, i did finally think of something else, but it took a while.

oh well, there’s got to be a hurdle somewhere, and this was the sole hangup for this pattern, so i can’t complain. now to see if it all works—i’ll pass the baton to the test knitters in the next day or so and let them work their magic while we wait patiently (no worries, i have plenty of other entertainment planned for the interim). 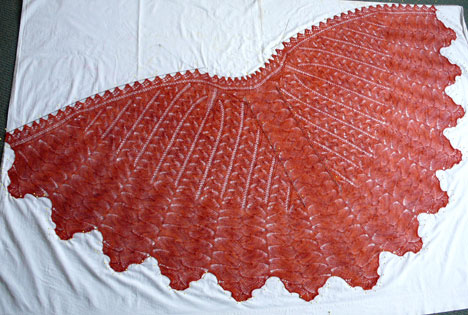 now. time to name it. i’m really getting strong vibes from it for something like “sugar maple”—is it too weird? i still like “autumn mantle” too but that has a monastic ring to it that bothers me a little.

at any rate, i am greatly relieved and elated that it will, indeed, be winging off on monday to kim and a trip to SPA. if you’ll be there, you can visit, say hi to kim, and get a closer look at the woolen rabbit booth. i wish i could be there, too.

ok,now—i have a pattern to finish up.