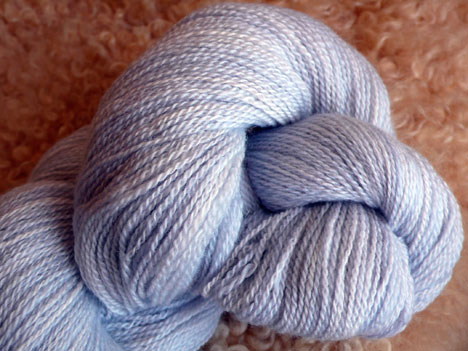 a quick note before i get started on other topics: deb kessler tells me that this is the last week to sign up for the fearless fibers whisper of spring lace club. one of the wonderful packages in this short-term club will include a reintroduction deb’s beautiful cashmere laceweight yarn (i’ve knit with it a couple of times—it’s gorgeous and very wearable). so if you’ve been thinking about joining, now is the time; signups close at the end of the week.

so yesterday, after i unpinned the shawl and taught my morning class, i sorta had a free afternoon on my hands for the first time in a while. i hauled out david’s christmas sweater to acquaint it with some long-awaited pockets (i know—shameful, right??).

first, i marked out on the flat sweater the approximate size and placement i thought the pockets should be with the yellow pins 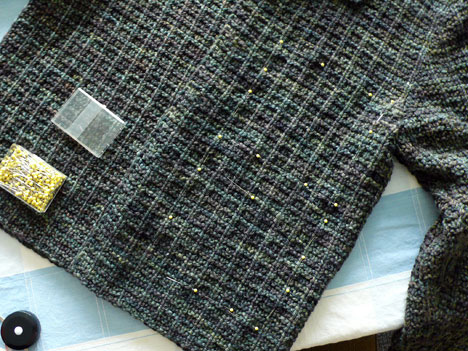 there are two pockets on each side front that will be the same width; the top one is not as deep and will have a flap and top entry. the bottom one is much deeper and will have a side entry
once david made an appearance, i had him to try it on to make sure we liked the layout 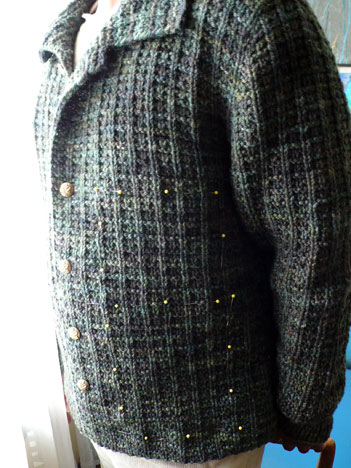 i originally had it one inch too far from the center and about the same too high, so i adjusted those lines till i was satisfied. 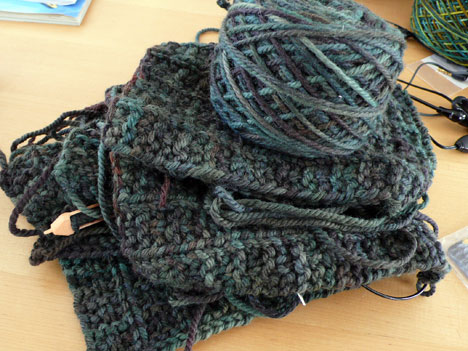 i spent the late afternoon and evening knitting the four pockets and two flaps. i left some edges in live stitches to be grafted on to the jacket. for the outside edges of the lower pockets i worked the slip-stitch edge that i used along the jacket fronts, to add stability.

this afternoon after class i started sewing them on—naturally, i had a couple of false starts, but after a while i got into a rhythm. nancie wiseman’s knitter’s book of finishing techniques is a great resource which outlines the techniques i used to apply these pockets. 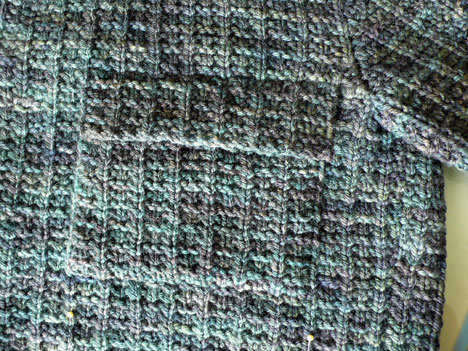 i got two pockets and a flap sewn on before my late afternoon class began. i’m pretty happy with how they are going on, though i may go back and tweak that very first one along the left side (or maybe not, heh).

now that i’m on a roll, i would love to finish this project tonight, but i don’t know if it’s possible. i still haven’t packed for our trip tomorrow or decided what knitting i’m taking along. i mean, i DO have a couple of main projects ready to go, including the new boxleaf shawl i started the other day (actually i worked on that in classes today and it’s growing; unfortunately, there was no light left when i finally thought about taking a picture).

but i’ve got no socks, scarf, or emergency projects planned, and leaving home with just two projects during the height of blizzard season in northern NY state seems like sheer idiocy. gotta fix that (in fact, even though david says he’s not ready to start another knitting project yet, i have an overwhelming urge to pack just-in-case yarn for him, too—maybe some nice chunky tweed handspun?).

the shawl is off to new hampshire, but i got a few shots while i had it on the dress form yesterday before packing it up to go (sorry, i wasn’t in the mood to model it myself; we’ll do that when it comes back home). 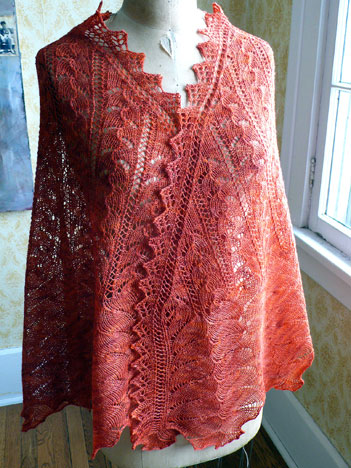 thank you all for playing the name game again—i have it narrowed down to four that i like.
i wanted to stay away from bird names for a couple of reasons—the main one being that this shawl was truly inspired by fall foliage (particularly the maples of new york state) and is related to the autumn arbor stole. i think of it as a tree shawl. 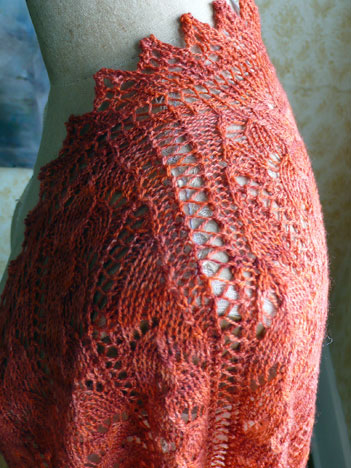 so i had a short list of tree-related names and once i removed ones that had already been used to name other designs (sugar maple and maple swirl) i had these remaining:

BUT then teli made a suggestion in comments that sorta knocked my socks off. she suggested the german butterfly name,
kaisermantel, which translates to “emperor’s cloak” 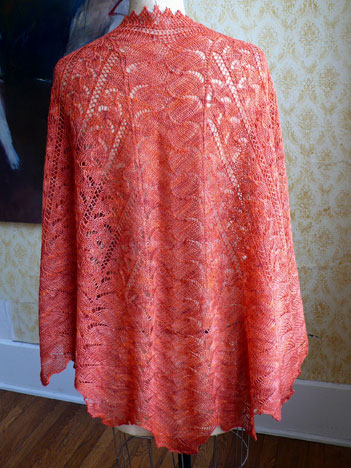 and i love that. i’m wavering over maplewing too, though, contributed by barb o. david likes autumn song.
in other words, we cannot come to a consensus. 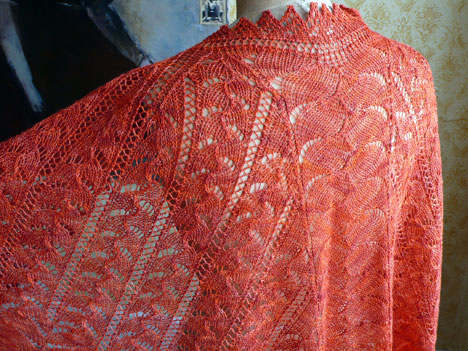 now i really do have to go pack and wind some yarn. we are leaving in the morning and traveling all day, so i won’t be around most of tomorrow. but hopefully, i’ll be back wednesday with news from the north (and, if nothing else, pictures of knitting . . .).

146 thoughts on “my kingdom for a pocket”