ooooh, i know—it almost hurts to talk about how cold it’s gotten over the last few days, but our stretch of glorious fall weather had to end sometime, i suppose . . .

yes, we had our first snow, which began saturday morning and filtered down lightly all day and evening on saturday. everything had a thin blanket of white for about 24 hours, that disappeared when the sun came out yesterday.

it was a lovely punctuation for a fun holiday weekend. 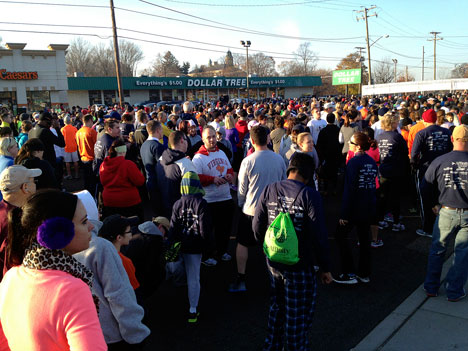 on thursday morning i got up extra early to participate in our local turkey trot event—a 5K run that drew thousands of participants, more than ever before. this was my first organized event and i was excited; i would like to run a half marathon in the spring and this was part of my research (i also signed up for the first run coming up on january 1st). 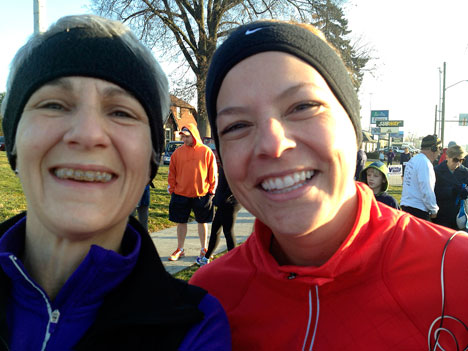 i rode over with my friend ellie who lives up the street; you know her as one of our beautiful knitwear models but in real life, she’s a doctor. she also ran a half marathon in october—those doctors are such overachievers. her training inspired me to think about doing events myself—thank you, ellie!

the start was a little rough with so many people leaving the line at once (they didn’t do corrals), but finally we were running and before we knew it, we were done. it went by so fast . . .

i did pretty well and learned a couple of things about running in events—mainly that is is WAY different than running by myself. so much so, that i may even try to find a running group to participate in once a week.

after a hot shower, i baked the cornbread i was bringing to thanksgiving dinner and we bundled this and our peach/blueberry cobbler into the car to head over to our friend debby’s house. 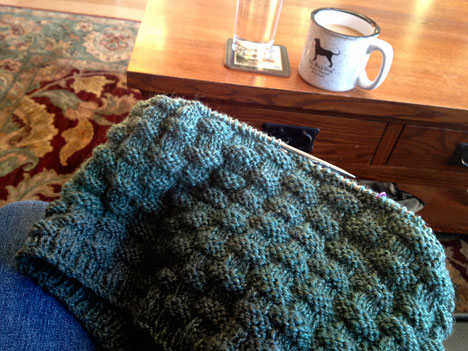 they live on a christmas tree farm now and had a house full of people to celebrate the holiday. dinner was early and after eating, we pulled out our knitting to sit, chat, and watch sports. i worked on my basketweave cowl in newhue handspuns baa baa huey, colorway pine (i don’t see a link for just the yarn, but you can see a link to cheryl’s cowl kit here).

i’m hoping to have my pattern ready VERY soon—look at how cool it turned out in the shaded yarn. david is drooling over it . . .

i want to add a hat and mitts to the pattern too, so i need a little more time to get those items knit up. i’m thinking these will be at least as much fun as our hot waffles pattern—quick, easy to knit, travels well, and can be worn by anyone; all very attractive traits for a holiday knitting project.

on one side of me, gracie—who is very old—dozed the day away, undisturbed by the noise and hubbub, deaf as she is. she perked up when we all filled our plates, but soon lost interest when no one let her nibble. 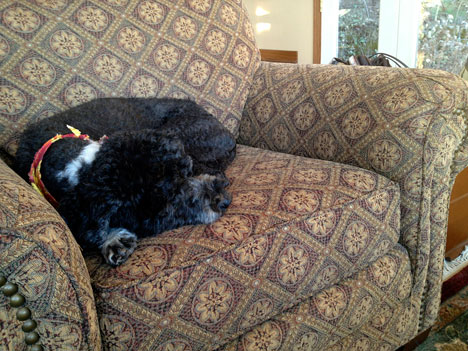 on the other side of me, david got started on his dishcloth project—he’s had several yarns with dishcloth potential lined up for some time, but had not yet begun knitting. i was happy to see him packing his needles and yarn into a projet bag as we got ready to leave our house that morning. 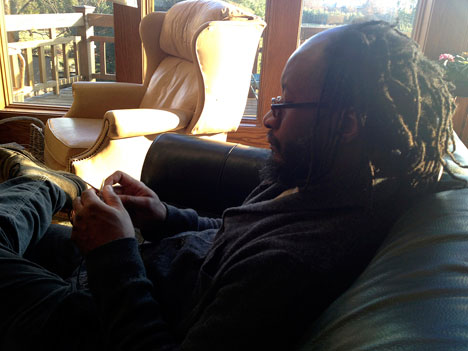 we cast on three sts to get started on the ubiquitous dishcloth we all know and love, worked in a diamond shape. i thought that would be a fun way to introduce him to increasing and decreasing. he got as far as the center point before we left; his yarnovers look great!

next he’ll learn to decrease; maybe tonight (i know; we’re so romantic around here, haha). actually, there was a bit of romance in our weekend—yesterday was our twelfth anniversary.

as some of you know, david always gets socks for our  anniversary and this year was no exception (albeit by the hair of my chinny chin chin . . .). i finished one of my waffle creams sock pairs at debby’s on saturday morning—the ones in the flapjack colorway. 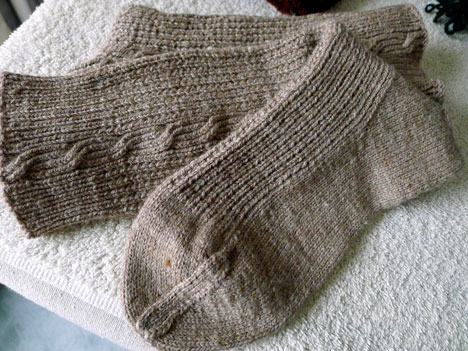 they really ARE luscious; i’m psyched to finish up the oatmeal pair now—the sock shelf is now empty again and will need refilling, the sooner the better. 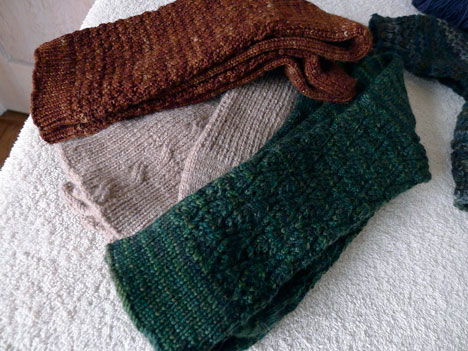 from the sock shelf i took the pair of sign of four socks i had stashed and the pair of almondines as well, then bundled them together with the waffle creams and wrapped them up with a card to put at his place at dinner.

david knows he’s getting socks each year but he still looks forward to this gift—like our marriage, it never gets old. he forgets that he modeled them at some point earlier, so they are new again to him. he really loves and appreciates his handknit socks . . . 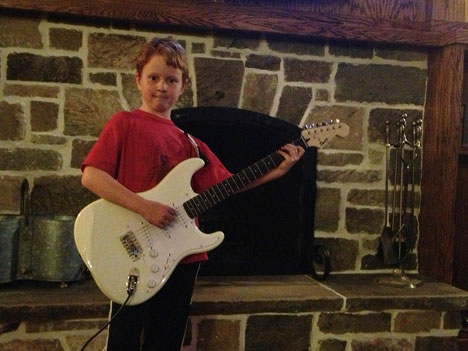 ooops, i got off on a tangent about socks and marriage and forgot to finish up our thanksgiving day, which ended with a talent show spontaneously organized by debby’s grandchildren, nieces, and nephews. jude was especially keen to show off his guitar skills and soon he was joined by tori 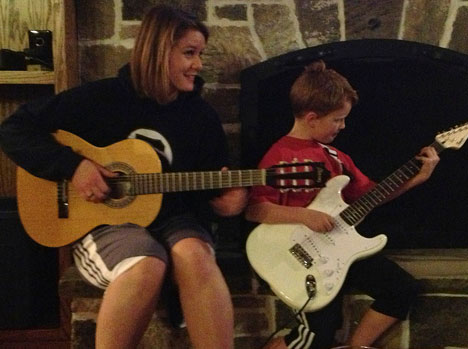 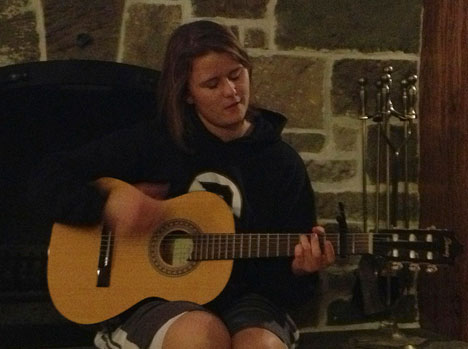 after that, the boys all got up and did a group rendition of pork and beans 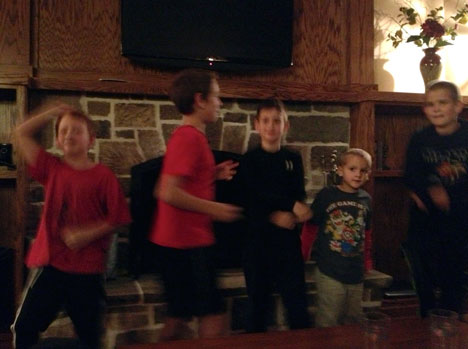 with their own choreography—i’ll leave the details up to your imagination. 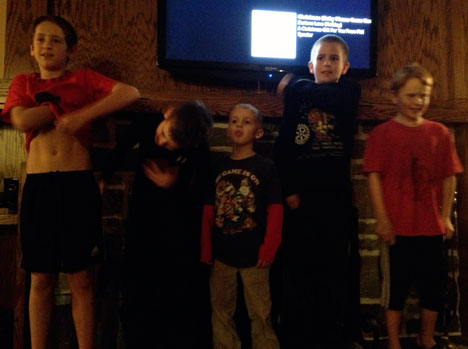 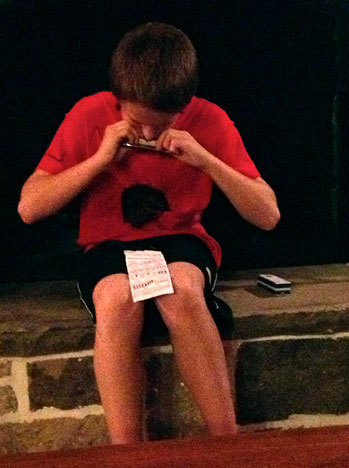 lincoln closed by performing on his harmonica and after that, most of us went home. what a great holiday; we love spending time with debby’s family!

i got quite a bit of knitting done over the weekend, but actually, i have to leave off telling you about that til next time—lots of christmas projects started and several finished, too. it’s a bit of a yarn parade as well, so it will definitely fill a whole other post. 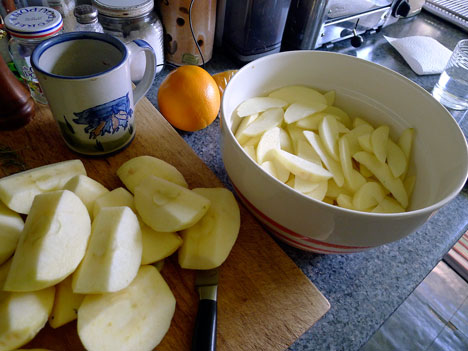 this morning i prepped everything for an apple crisp, so that i could bake it in time for class today. i’m going to pop that in the oven in just a little bit—i’ll take pictures when it comes out to share next time too. because nothing goes better with yarn than apple crisp . . .