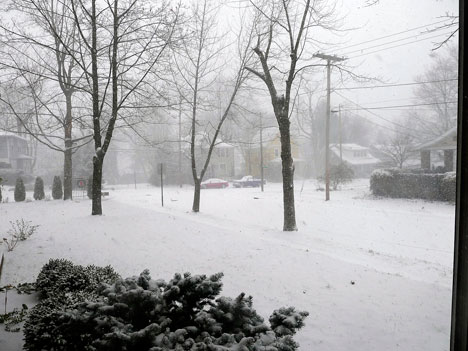 what a nice surprise to wake up to the morning after we got in from las vegas—a whiteout storm that blanketed our world, giving us a bit of a cushion on which to segue back to work. 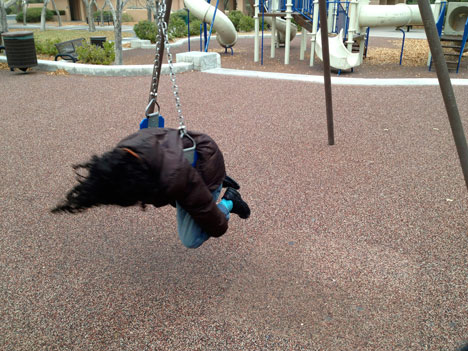 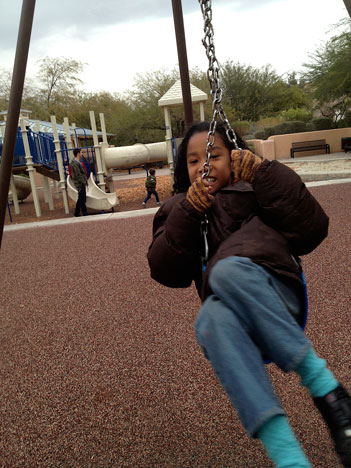 getting out in the chilly air was a nice change of pace for those who are used to temps well above 100 degrees as a rule. 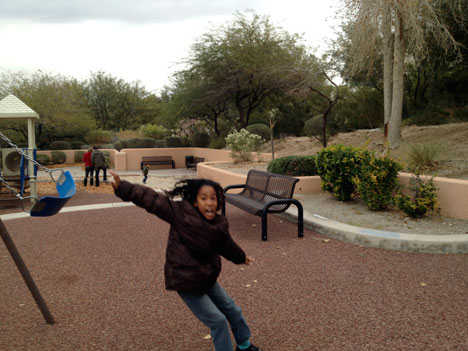 back at home and changed into PJs, we baked cookies to replace the ones i brought with me, which were eaten all to quickly. 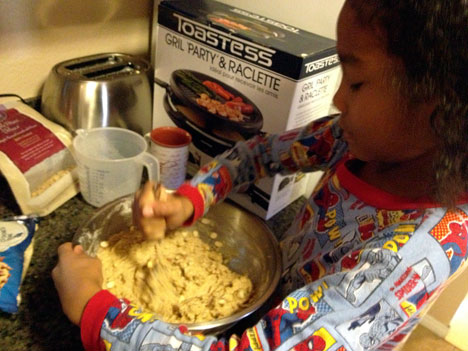 luckily, i had the recipe on my computer; it’s the one i shared with cookie A’s sock club last year. we made ours with almonds and white chocolate as per nan’s request. we forgot to buy baking soda, but they seemed to fare well despite that omission. 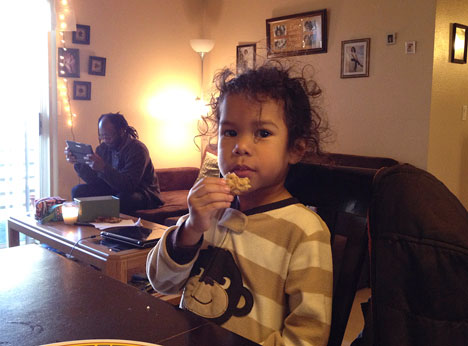 i did plenty of knitting during these days when the kids were off school—nan got me hooked on watching episodes of once upon a time; we’d watch three or four in a row while knitting and the boys played a video game or watched a movie with david. it was nice. 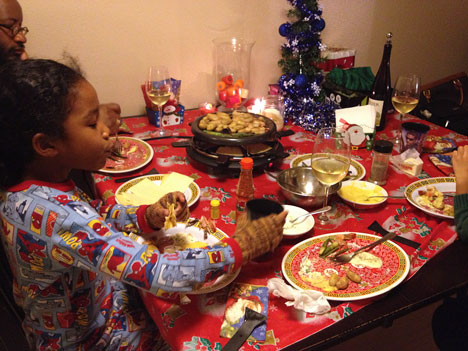 on our last evening we had our christmas celebration. first a meal of raclette, since nan and amad are swiss and wanted to share a bit of their cultural tradition with us. raclette is both the name of a cheese and a particular type of meal that has similarities to fondue.

nan received a little raclette stove from her employers as a holiday gift and found some cheeses that were nearly the right kind at trader joe’s. this will probably vary depending where you live, but you can usually find raclette cheese in a specialty shop or a good grocery cheese department. it’s a swiss melting cheese with a sweet, nutty flavor; if you can’t find it, then try a substitute from the following: emmentaler, gruyère, fontina, tilsit, comté, appenzeller, and morbier. 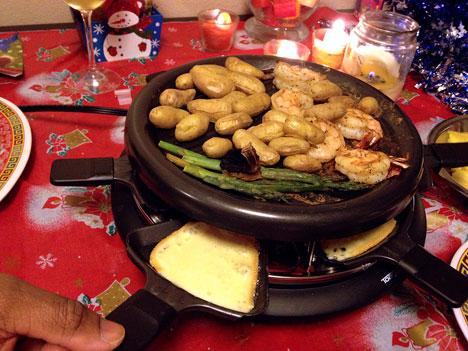 anyway, the idea is to roast the cheese a bit underneath the grill until it is bubbly or even toasted (a matter of taste). meanwhile above, pepper strips, mushrooms, tiny potatoes, and other dipping foods have been roasting to doneness; some parties like to have charcuterie or deli meats on hand as well. when the cheese is good and melted, use your dipping food to scoop it up and eat it. drink some nice wine with it, too; the acidity adds a refreshing note and a little holiday cheer never hurts.

like sharing fondue, it makes for a very social party with a relaxed eating experience. part of the fun is figuring out how you like your ingredients to be cooked and then waiting for the right moment to take what you want—you have to be careful or someone may scoop you, haha; ask me how i know.

i’m a slow eater and kept losing out to the men at my left. i eventually had to tell amad and david that i had dibs on one of the shrimp and a certain coupelle which held “my” cheese. and do you know what david said??
“well, you snooze, you lose”

after we washed up it was time for a little dessert and the opening of gifts. nan was smart and did not put any name tags on the boys’ gifts—they just shared everything (easy because amad is so generous and sweet). 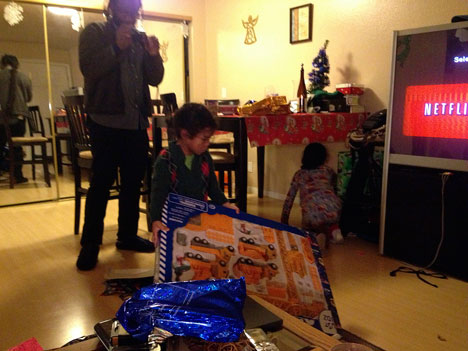 i love how micah expertly wrangles into submission this gift box  that was literally bigger than he is.

totally worth the struggle.

we flew home on christmas, just ahead of the storm i didn’t know anything about til we got here. but yeah, it came, following right on our footsteps; i’m so glad we got home ahead of it.

it was the middle of the night when we finally arrived, so we were sacked out still when the mailman banged on the door the next morning to hand over a huge tub of mail containing several boxes, small packages, and a stack of cards—i have a lot of thank you cards to write, starting tomorrow; david and  so appreciate all the cards and holiday cheer that people send us. 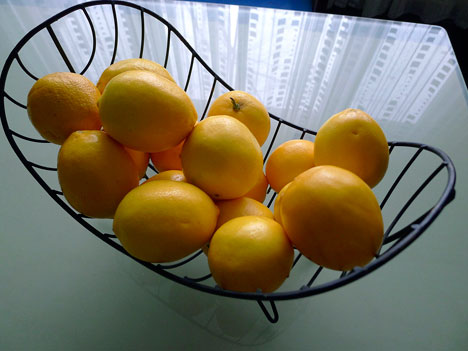 one box was filled to the brim with fragrant lemons from the tyler orchard—kim, kade, and sam went picking and bundled up this bit of seasonal joy for us. OMG—what a gift. the house is simply filled with the scent of lemons; i’m in heaven. i detour through the room where i’ve placed them as often as i can manage just to smell it, mmm.

thanks you guys—you know i love this! 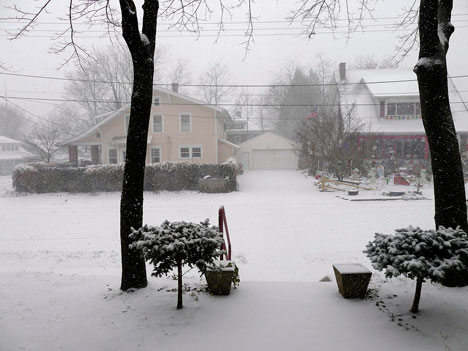 when i looked outside i realized that some time between going to bed and receiving the mail, we got dumped on, haha!

i had lots of FOs to block, so i stayed inside during the worst of it, soaking and squeezing and shaping woolens. remeber the other day when i asked which DK mitts i should knit? i decided after all to knit the hoegaarden mitts straight from our october club pattern, instead of going with a different one. i had worried they were too involved to work on while visiting, but it turns out, they knit up in a flash—i knit one during an afternoon and the other in the evening. ah, the magic of heavy DK yarn . . .

that hot air vent in our office has become a favorite place to block and dry small items; i can keep an eye on them and remember to reshape often, so they look their best. 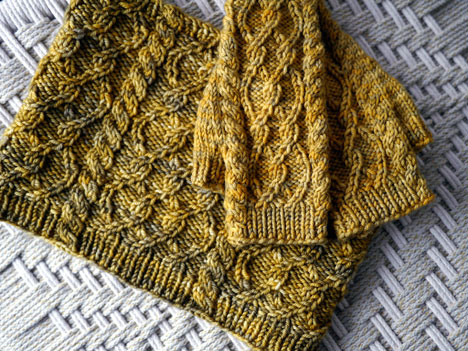 i knit the matching cowl back when i was making samples for the club release; i wanted to complete the set for a gift. they look great together; really luxurious. i’m glad i knit the mitts to match and not something else. 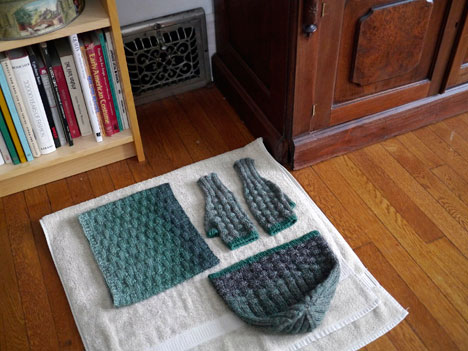 near another heat vent in my study, the creel set is laid out drying as well. there was a moment last week when i really wasn’t sure i liked this project, but i kept going because how many times does it happen that i’m not in love right up until i block something, only to do a total three-sixty once we see how it comes out of the wash?? 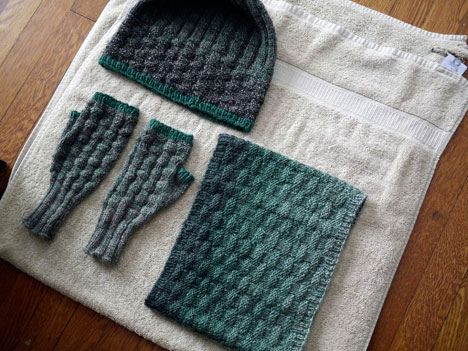 add yet another to that list—i just love it now. the texture totally stands up to the busy, two-tone yarn color of the hat and mitts. and the hat shape, which looked for all the world like a giant (unattractive) baby binkie on the needles 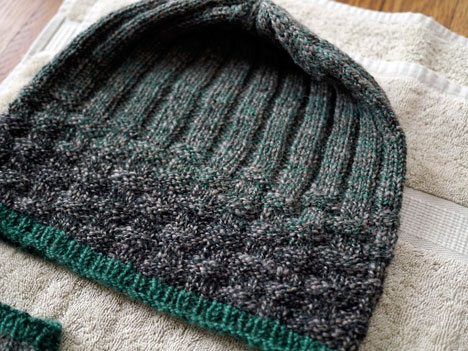 has relaxed nicely with very little coaxing and is now doing exactly what i envisioned in my head. 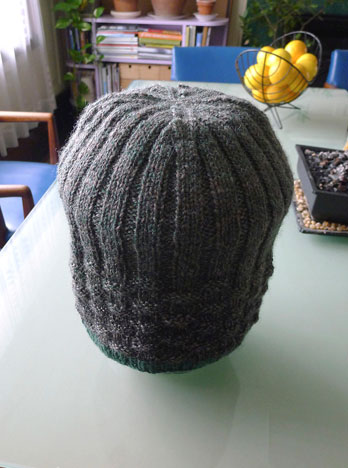 for good measure, i let it dry completely on my homemade hat blocker—an upturned bowl balanced atop a large jar (or vase). 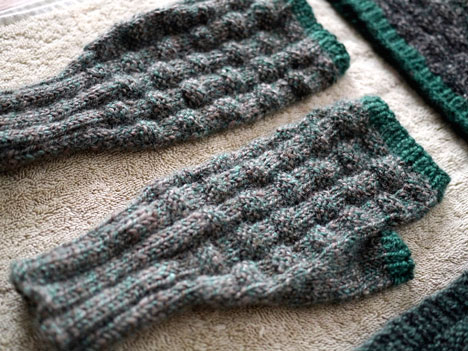 i dunno; maybe it was the light in that apartment? the mitts were incredibly homely, i thought, when i got them off the needles. but they look SO much better here at home. i mean yes, the handspun baa baa huey yarn i’m knitting with lends its own texture and “voice” to this project, but one that is cozily attractive to me now. and in a sleeker, more consistent yarn, they will be elegant. any guy would love ’em. the pattern needs a last few touches and then it can go off to the proofreader, yay; hopefully, we’ll be ready to launch it some time next week.

and while i busied myself in the morning blocking all the items i’d finished during our trip, we spent the whole afternoon yesterday shoveling snow during the lull; no sooner did we get back inside than it started up again—furiously spewing and redoubling its earlier efforts. david went back out after dark to clear the walks again. 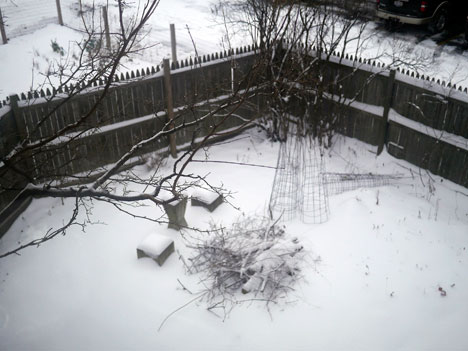 by this morning, the snow had stopped, but the sky still looked ominous—low, dark gray, and heavy. sure enough it started up again just before i had to go out to the dentist. obviously, not a good day to run; hopefully there will be enough clear pavement tomorrow for that . . .  no worries if not; i have plenty to do indoors (and an exercise bike for just this situation).

with so much knitting done, i have lots of pattern writing to catch up on, but there is another project that’s been waving its hand at me for a couple of weeks—seaming up my bloch ness cardigan. 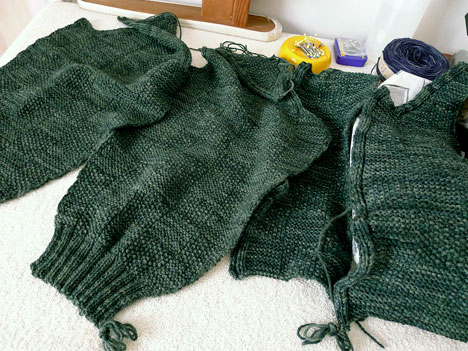 i got my pieces out this morning and spread them over the pressing bench. that’s as far as i got before something interrupted me and i ahven’t been back upstairs since. however, as soon as i’m done writing this post (very soon) i’m heading straight to my workroom to block the pieces. 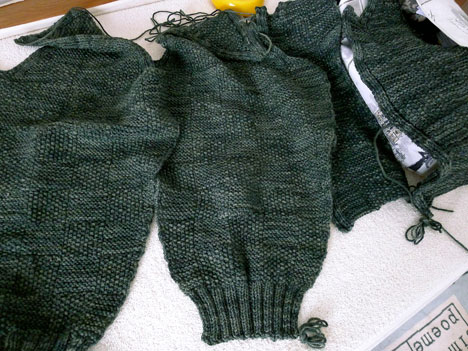 just look at them all; aren’t they deLISH?? i cannot wait to have this cardigan finished; i am so in need of cardigans in the weight right now—i’ve been wearing the same two or three almost constantly and that’s getting a little old.

ok, now, that’s enough dawdling over a blog post—time to get me back to work. now that i’m home and have you all caught up, i’ll be back to our usual schedule of about every other day. next time we’ll hopefully see a finished sweater and maybe a pattern for that new hat i knit on the plane to vegas. . . for which our friend malin has kindly suggested a name and i like it—we will call it strömming, which means herring in swedish (also sill, but i like strömming better).