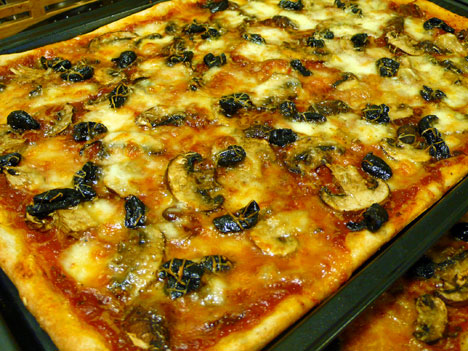 wow, the weekend just flew by—sorry it’s been a few days since i posted, but i just had to take a little time to catch up on life (have you heard; stress and burnout are the new yoga . . .). i didn’t work at my desk much at all over the break—a little gardening, a little cooking, a few pattern edits, spinning class, and some knitting; those are things i needed to get done. and napping.
and very refreshing to be away from the desk, i might add—i’m totally re-energized this morning.

after getting the bookkeeping and paperwork out of the way first thing saturday, i went to a friend’s house to knit into the early afternoon, which was a wonderful getaway—like being on vacation, really. they have a lake and it’s quiet there; we all got a lot of knitting done, too.

as you can see, we made some time on saturday evening to put together a bunch of our favorite pizzas. this is truly a team endeavor—david chops mushrooms, shreds cheese, and dices olives while i cook the sauce, form the crusts, assemble, and bake them. it’s fun to work in the kitchen together; we don’t get to do this very often.

we’re trying to use up the last of our garden tomatoes from ’08 and this was a good project for it. the pizza is always best when it’s fresh from the oven, but we do freeze a few from each batch for emergency dinners—much better than anything we can order locally.

i also made a huge pot of black bean and vegetable chili (no photos, sorry—but it was yummy) which we portioned out into freezer containers as well, after keeping some aside to eat this week.

after supper i worked on my big secret project for a couple of hours, then switched to the signature sock project while we watched TV 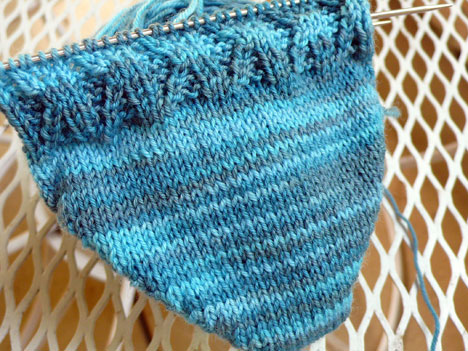 sunday morning was spinning class, which we followed up with a little blocking party—susan and anne marie each had a finished twinings piece to stretch, so they came armed with blocking wires and we put the lace on to soak while we did some spinning. 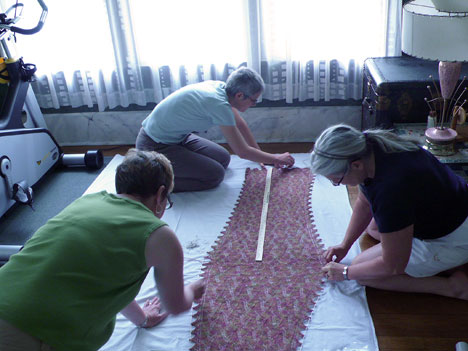 we started with anne marie’s stole. first passing the wires through each end to establish an idea of the length, then we slung the points onto wires along the sides and began to pin, pulling two center points end-to-end, then two points side-to-side, using the finished dimensions listed for the petite size from the pattern (more or less). 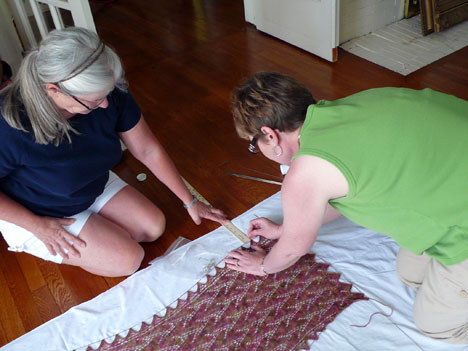 once we had those four points established, we pinned the stole corners out, then pulled and pinned first one long side straight, then then other, measuring constantly as we went 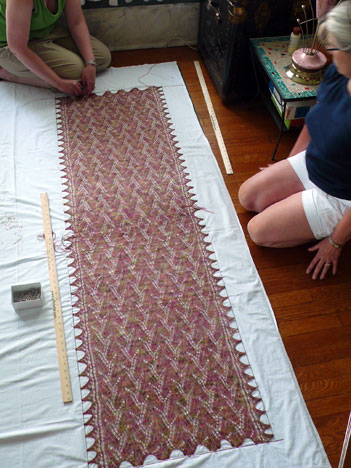 till it was all pinned out relatively square. anne marie left her ends to weave in after blocking, but they can just ass easily be woven in beforehand, as long as you leave some ease for stretching. 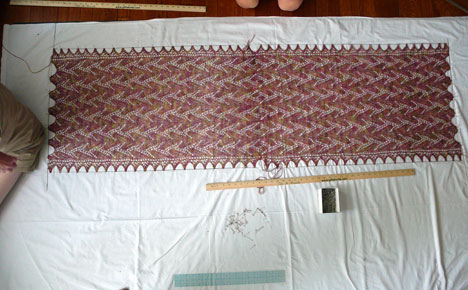 though some people knit this stole in one long piece (which is fine!), anne marie did hers in two as the pattern is written. i absolutely love the join on this stole—that center area is so pretty.

next we did susan’s scarf (knit in one piece) 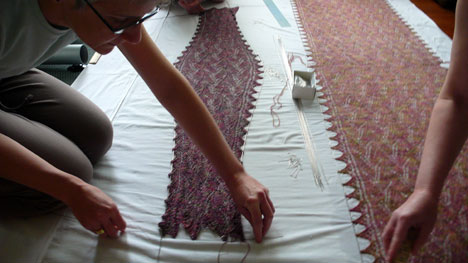 we proceeded pretty much the same way, working outward from four pinned points 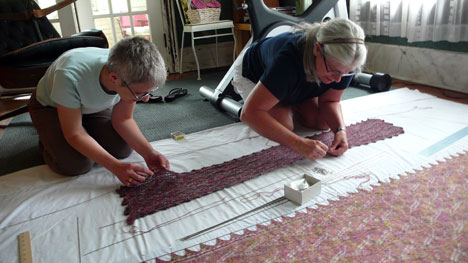 and soon we had two pieces blocking side by side. we misted them all over as a final touch ( the lace yarn was already drying a bit) and left them to dry 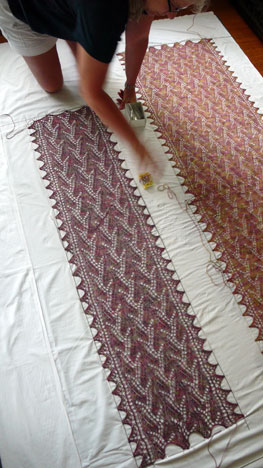 (photos courtesy of linda, who was not blocking but cheering us on from the sidelines and kept her wits about her enough to remember the camera—thank you, linda)

though both pieces were dry in just a few hours, i left them pinned overnight to be sure they understood what they are supposed to now be. 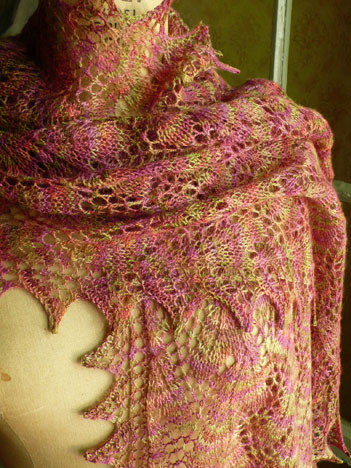 this soft, springy merino lace yarn is very close to the original yarn used in the pattern sample. it produces soft lace fabric that is extremely lightweight and easy to wear, yet offers distinct stitch definition. and don’t get me started on all of catherine’s beautiful colors . . . 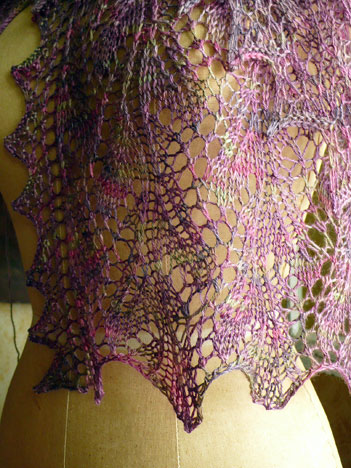 susan chose to knit a scarf size version of twinings (just three repeats of the main pattern + edgings) due to a limited yarn supply. 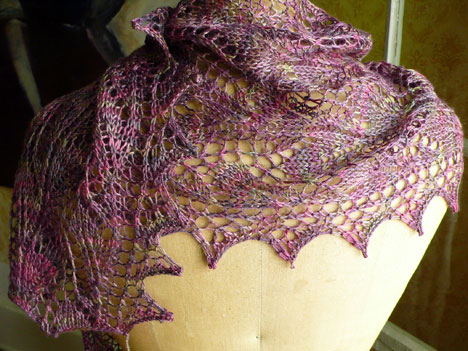 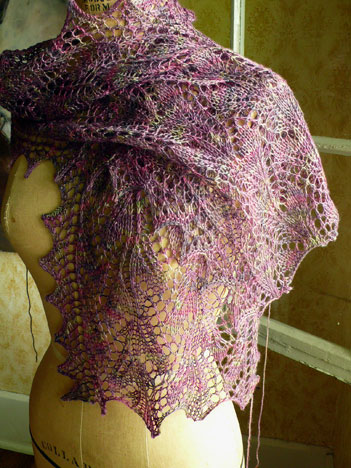 just lovely, right?? it was a barrel of fun to do, as well. but i have to admit, afterward i took a nice long sunday nap, hehehe. 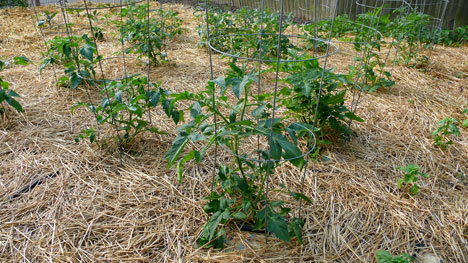 when i got up it was time to get out to work in the garden—the heat of the day had passed somewhat and i had a few things i wanted to wrap up before the week got underway.

now that the seedlings are all up and have a second set of leaves, i weeded, thinned, and cultivated the soil in the seed bed a bit, and david laid down the last of the newspaper, straw mulch, and soaker hose (which is doing an absolutely AWESOME job, BTW—no weeds and nice cool, damp earth beneath it everywhere). 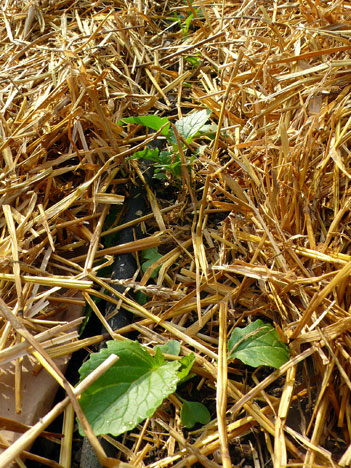 (david might have gone a little nuts with the straw as darkness came down but i went out this morning to make sure the babies weren’t smothered.)

once i finished that chore i took a turn around the rest of the garden to take a really close look and see how things were progressing. imagine my surprise when i spied this 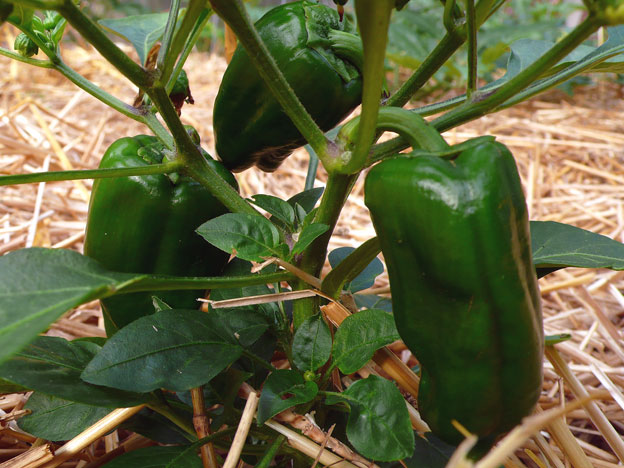 the giant marconi peppers already have several fruit which are 3-4 inches long. that weren’t there last week, yikes. for comparison i looked at the carmen peppers (another sweet frying variety) 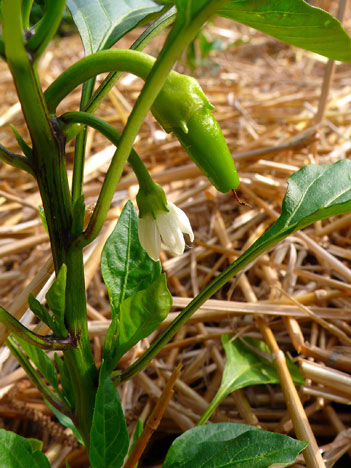 not quite as burgeoning, but hey, not baaad. the eggplant are growing like crazy, too, but the little buglies are finding the leaves delicious—i need to spray them this week on a dry day (not today, it’s raining)

i admit to hovering over the squash plants on a daily basis; i’m worried about losing them when they’ve gotten off to such a spectacular start. so far, so good (but a little preventative spray with rotenone won’t hurt).

where the green squashes already have several fruit on each plant, the yellow squash was behind; they weren’t quite as strong when i put them in, so again, more worry that they wouldn’t make it.

all for naught, though—this morning i was rewarded 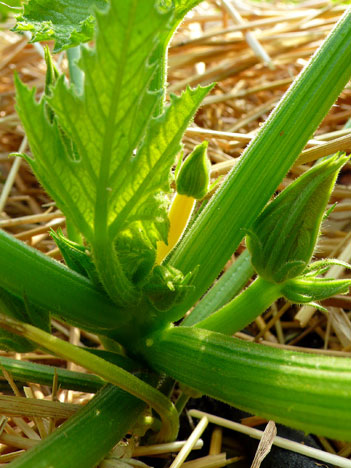 how cute is that?? i couldn’t be more thrilled

strawberry update: yes, just as our one ripe berry was about to be perfect for eating, some little critter beat us to it in the night. david—who was convinced we didn’t need it—took one look and announced he would go out today to buy netting. thank you, dear.

after poking around the vegetable patch i set to work cleaning up the perennial beds some more—pulling weeds, finding tree volunteers for david to cut back, etc. by dark, we had the yard looking really nice—a few hours work together well spent.

the doctor who owns the building behind us was out clearing his beds, too and offered us a boatload of day lilies for our yard—just what i wanted for the side facing my office window. david will plant those today, i hope.

after we ate some dinner i knit some more on the secret project (it’s getting there), but once i got in front of the TV later in the night, i switched to the roger sock, which truly deserves to be finished. 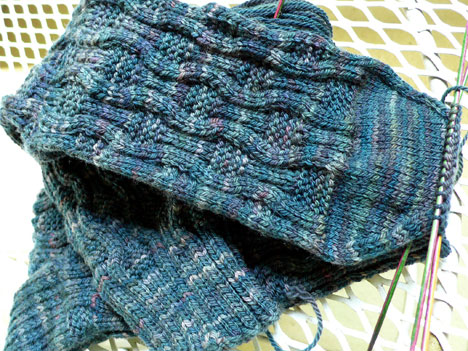 i got it almost done, too, before conking out. this morning i finished it up in class and now it is all set to go. just in time—roger’s birthday was a few days ago and father’s day is coming. we have a very special release planned for this sock on friday, june 19th. gail, chris, and i have put our heads together and come up with a wonderful, fun plan. stay tuned . . . you will not be disappointed. 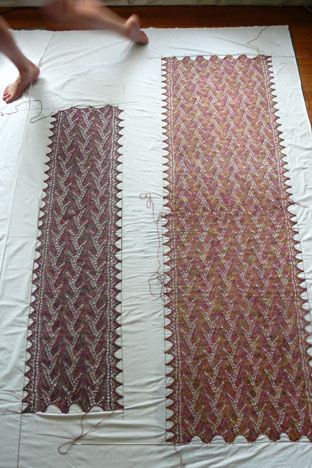