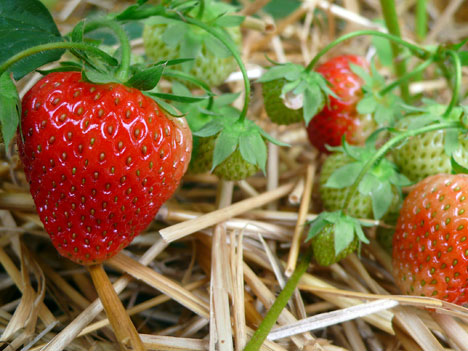 our strawberries are ripening one after the other now and each day we pick a few more. the first day we each ate one, but now we’re saving them up til tomorrow when we might be able to actually make a dessert with them. 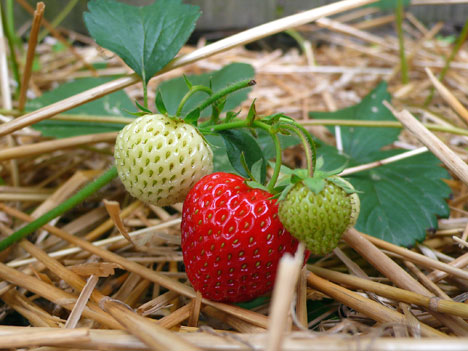 (i just love looking at the delicate white and greens ones, too)
david figured out the the “critter” who ate the first two was a slug; since then he’s been holding vigil over the plants and snatching the berries before another attack. he also started saving coffee grounds to spread around the plants (slugs hate caffeine and scratchy stuff like grounds and glass).

in the slug’s defense, it was at least considerate enough to eat the whole berry; only the stem and a trail of slug slime remained.

while i was out there this morning, i took another look around to make sure everything else was slug-free and what i found next just about floored me 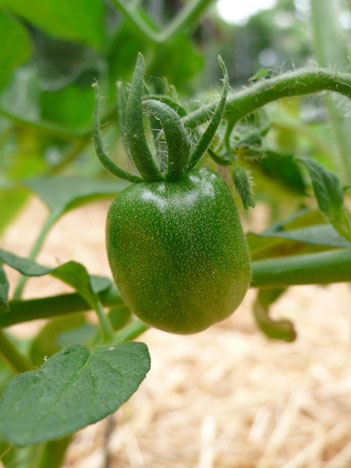 and not only that but this 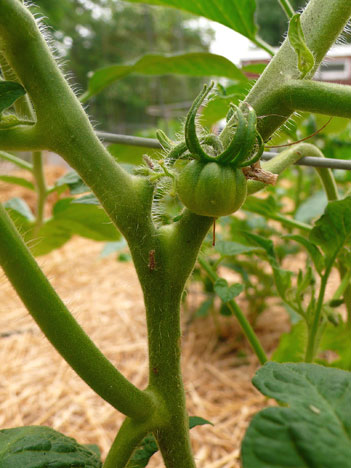 these are the plants from my friend kris that got a worrisome sunburn the day i put them in the ground. they seem to have recovered . . . i don’t think i’ve EVER had tomatoes on the vine this early.
now, i’m not saying that planting by the biodynamic calendar is what’s making the garden so happy this year, but i’m sure as heck gonna do it again next year. every single thing i put in on planting day is growing like it’s on steroids.

the only thing not growing?? the asparagus (grrr), which did not go in when the calendar said so.
even my spinach seeds have germinated close to 100 percent—a FIRST for me—and are producing big, lush, dark green leaves.

beckie came over last night to join us for supper and knit for a while on her sweater. i dunno why, but i didn’t get a picture of it—next week i will. she also helped me out by modeling the roger shocks for a photo shoot. 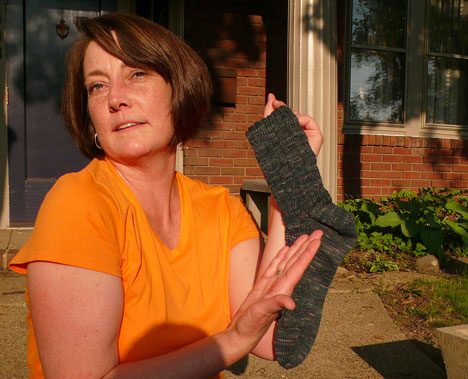 the socks, unfortunately turned out to be a little small on david but they fit beckie perfectly and she is turning into quite the sock model (sorry kim, i have to admit, she’s giving you a run for your money . . .). when i started art directing things a little, she informed me that she’s seen enough modeling photos to have learned the ropes already. and truthfully, she’s right; she’s a breeze to work with.

i got started on a new scarf while we chatted—i noticed sunday night that i am heading for TNNA with a serious lack of take-along knitting. i have just four projects on the needles; one is secret, one is too big to take anywhere, and another is too complex to work on while socializing in a professional atmoshphere—not good travelers.

and i have just one sock project on the needles at the moment. i thought a couple of little scarves might do. i have a skein of shivaya cashmere lace in the beautiful sea grass colorway that i’ve been wanting to break into 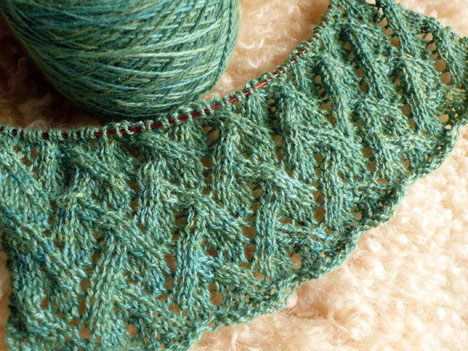 i realized recently that i have no scarf in this cheery green, yet it’s a color i gravitate to. i played with a couple of stitch patterns (cashmere is very soft, so it often takes some experimenting to find the right thing), and settled on this little variation on a trellis or grapevine pattern. it is JUST the ticket—i already have it memorized and it weighs nothing to take along. perfect.

the night before last, i got out a skein of fibre isle pearl bison, a merino/seacell/bison/cashmere (is that enough luxe for you?) blend that sylvie sent me a while back. it’s been wound in a ball for several months because i thought about using it to knit hoarfrost, then decided to go with a blue colorway. so it’s been at the front of my queue, waiting for me to decide what to knit with it 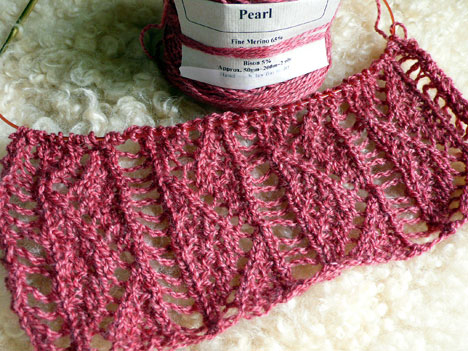 the yardage is just enough for a little scarf in a very open stitch pattern, i think. i’ve had my eye on this motif for a while—i keep seeing royal flags in it. the yarn complements it well because it has a tight twist that gives the stitches a crisp edge. this will make a very pretty accent scarf at the throat of a jacket or sweater or even a dress—not warm, but a real attention-getter, i think. 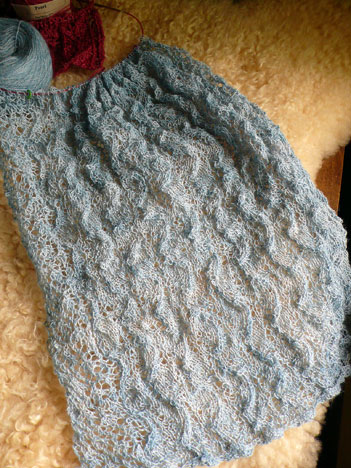 it’s definitely growing—i’ve been making sure to spend a little time on it every day or two and that’s working out well. now that it’s bigger, you can really see the soft washes of color throughout the piece that really make it for me. the subtle color changes are the perfect accent to the delicate lines created by the yarnovers and decreases in the sheer fabric. i can’t wait til this is done; i know already that this is destined to be one of my favorite dress-up pieces.

seeing as i am leaving friday for columbus and TNNA, i better get back to work now. i’m hoping to finish my secret project before i go and i must get david to model his own namesake socks today for a photoshoot so i can release that pattern soon. by the way, you should see the killer pair that jocelyn made for chris’s booth—she wrote a nice blog post about them yesterday. and carol c knit a pair too, but i can’t find her on ravelry (send me your link carol!). 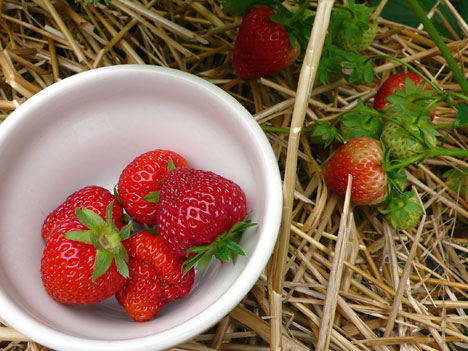 30 thoughts on “fruit of the vine”