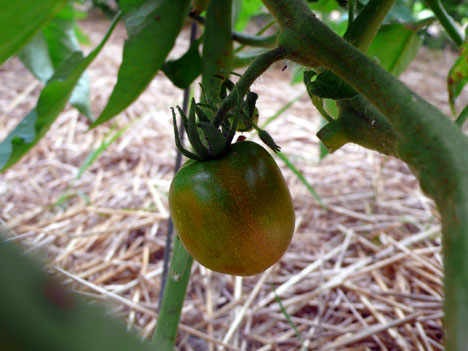 i spotted a little tinge of pink on a few tomatoes today . . . and another little gift of rich, deep purple under the eggplant canopy. 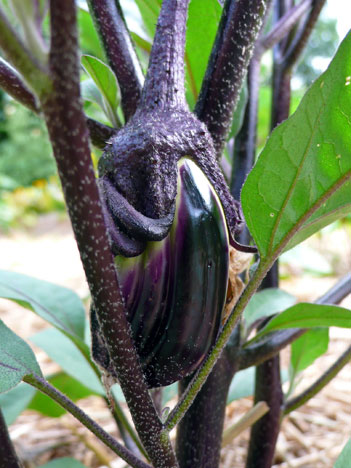 i know the garden always seems to come first in my posts lately (i try to change it up sometimes), but once that headliner photo starts the conversation, that’s what happens—it’s a lot like my life. feel free to scroll down for knitting—no one will know the difference, heh. 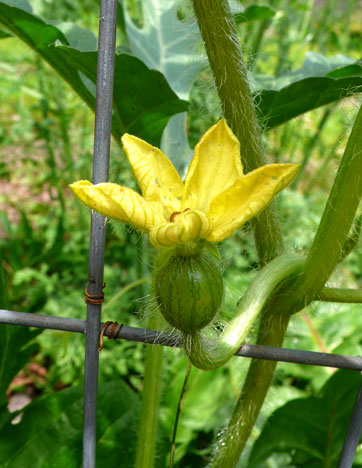 i cannot believe it’s already the end of june and time for real vegetables to be growing—where did this month disappear to??
at least it was a good one from TNNA at the beginning to harvesting and many FOs by then end. and more cycling in between, for change. this month i made a big effort to take time for getting out on my bike and it’s paying off—i already feel more energetic and at the same time, less anxious.

it’s a challenge though, with a busy business and the garden season in full swing. i won’t say that i make it out there every day, but i’m averaging 4-5 times per week now. next, i’d like to add back my weight raining; i always loved that and it has such great mental and physical health benefits. 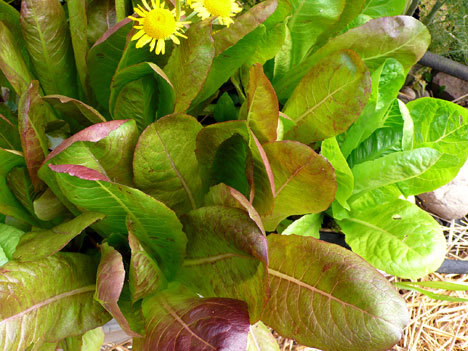 i didn’t take flower photos today because the vegetable patch was offering so much eye candy. the lettuces are big and crisp and colorful right now (thanks to the cool weather with a good mix of sun and rain)—perfect for delicious caesars or other dinner salads. 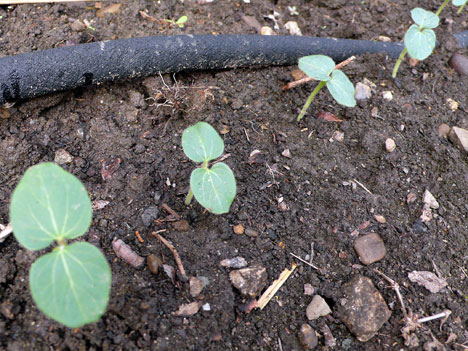 some of my okra seedlings are doing really well. since i’ve never grown okra, i tried out four types by purchasing sample amounts from victory seeds. i’m really glad i did that because 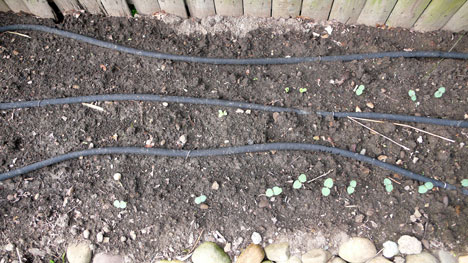 you can see that the ones to the right of the photo in two rows came up well, but the area to the left has none (so far). so, two types germinated right away and are growing well, but the other two are either sluggish, or they’re not going to make an appearance.

so it was smart to try different ones. the stupid part?? (and you know there is one!) is that i didn’t label which was which, so i don’t really know which types were a success—yet. once i actually see fruit on them, i’ll be able to tell; maybe even once the leaves get bigger. the same thing happened with my greens. 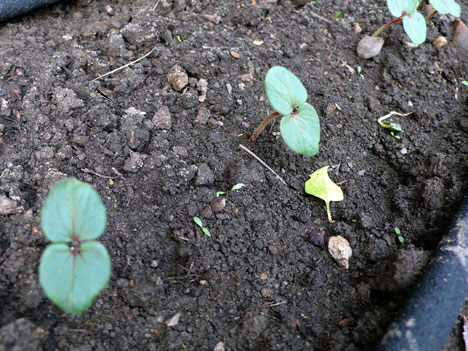 comparing the seedlings to the photos on the store site i’d guess these red-veined ones are either burgundies or aunt hattie’s red. i think the green ones are emeralds, but it’s just as possible they are the dwarf green long pod.

the thing about tagging plants is that between mulching, watering, weeding, and critters, the tags always end up strewn about the garden, nowhere near the plants they belong to, or they fade to an unreadable state pretty quickly. so i get lazy about using them (then wish i hadn’t been). i gotta think up a better system . . .

tonight we’re having a quick dinner of pasta with sauteed squash and some of the tomato sauce i cooked last weekend—it’s great to have those containers of ready-made sauce all set to go; we can customize each dinner with something different, depending on what’s ripe out there.

i’ve been watching the watermelon plants all week because they are finally taking off and growing big—every day i need to re-thread a new long arm around the fence they are growing on. and today i spotted something else among the leaves 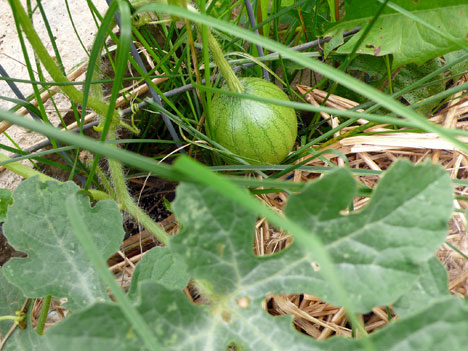 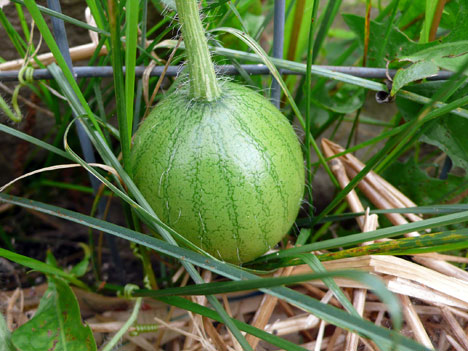 does anyone know if i should pinch off some of the smallest fruit to let the bigger ones grow? will it help the alpha melons be even sweeter and better? i don’t know that much about growing good melon . . .

back inside i am nursing a pepper plant that had a run-in with the hose the other day (all my fault—it’s not like the hose attacked it or anything). 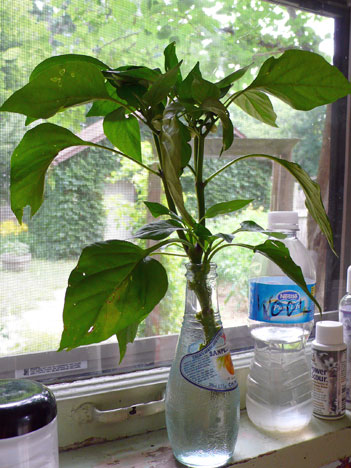 and it’s so pretty there on the window sill that i just had to take a picture. i’m hoping it will take root in the water so i can put it back in the garden. normally, i wouldn’t worry about losing one of my 12 or so plants, but i had only three of this “yummy pepper” type and they are my favorite. they ended up in a very vulnerable garden spot and i lost one already to general weakness. this might be a good example of why some gardeners tend to overplant . . .

anyway, i’m really enjoying the graceful spread of its branches in this spot over my sink—it’s even opening some flowers.

speaking of my sink, i finished pompa in class yesterday and it’s off the needles and into the suds as we speak. 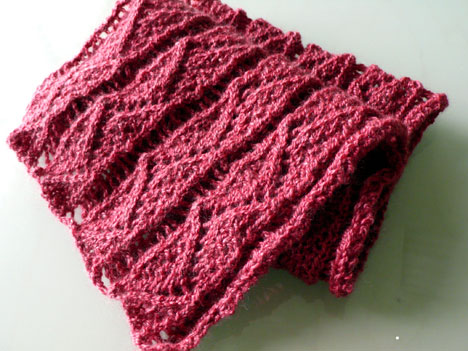 my 220-yard skein of fibre isle pearl bison in colorway creamberry went a very respectable distance in this project—my scarf measures about 36 inches before blocking and i’m expecting it will be somewhere around 45-48 inches after stretching by approximately 11 inches wide. we just love getting the most out of smaller skein of luxury yarn. 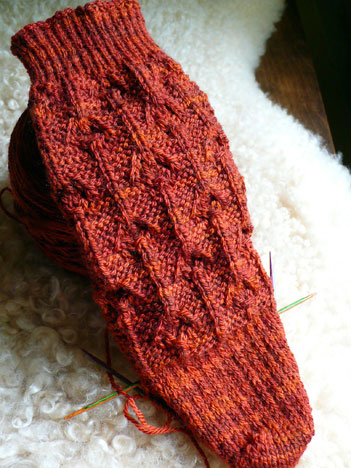 my nate sock has seen some action in the last couple of days, too; it now has a heel and part of a foot (oh, the joy of sport yarn for socks). i’m also almost done with my dark regatta sock, but i forgot to take a picture and i’m too lazy to go do it now. 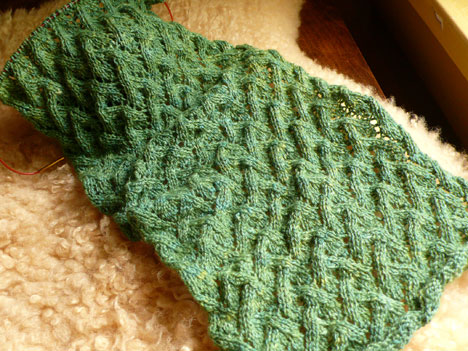 last night after classes i worked on a pattern for a few hours, then went off to knit on my fruit of the vine scarf, adding several repeats of the pattern. remind you of anything? 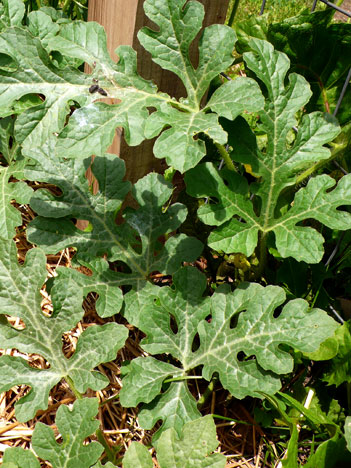 the stitches even have little fruits, just like the watermelon vines . . . 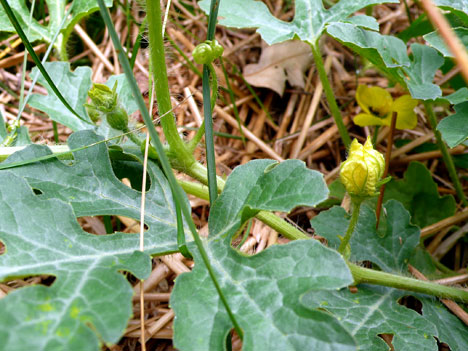 i’ve spent too much time already talking today, but now, here’s something you’ll really like to end the post, so i must keep going a little longer.

i’ve been egging on my friend kim (sadly blogless) for over a year now to finish a certain project to no avail—she just wasn’t feelin’ excitement of the final stretch, i guess (i even offered to block it for her as an incentive).

but then chris stepped in, pleading and begging because it’s knit in briar rose heritage (now discontinued, but similar to josephine) and she wants it for the booth at sock summit.
mission accomplished—kim finished the thing up in just a few days and sent it to me for blocking, which i did yesterday between classes 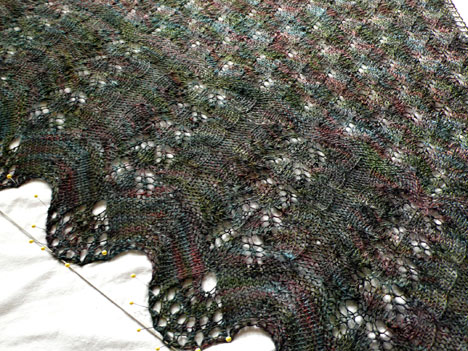 it stretched out beautifully to the generous size kim was hoping for (about what the pattern states) and all the lace opened up, which only shows off the incredible colors in the yarn even more—it’s an iridescent blend of blues, greens, and plums, overdyed with black 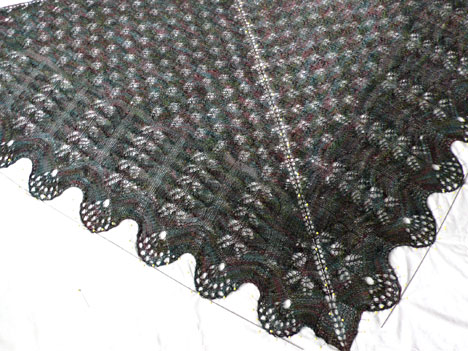 this morning i unpinned it and took some photos on the dress form—it was very dark because of the weather, but i managed to get a few nice ones—which i needed; i don’t have many good photos of this shawl. but now i do . . . 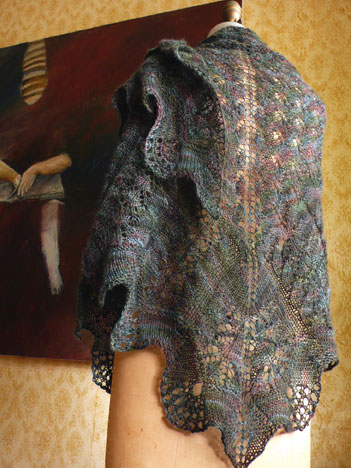 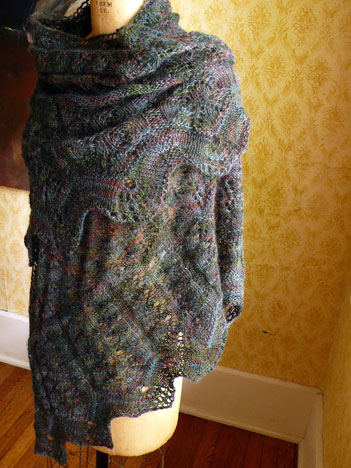 i’ve knit three of these in various yarn weights (and types) and each one is my favorite for a different reason. 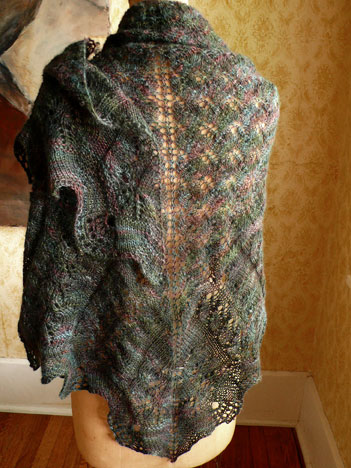 kim’s yarn is fuzzy and fairly heavy for a shawl, but that’s what makes it a great piece to take to the beach at night or to substitute as a coat in winter. 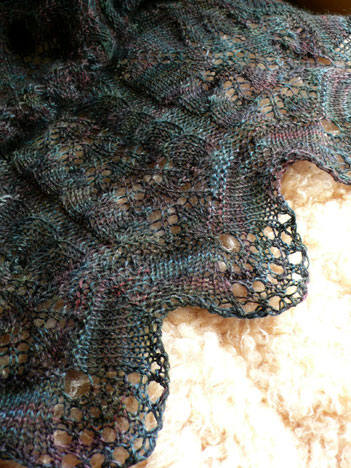 i have a moth knit in a similar yarn that is probably my most-often-worn shawl—it lays just right on my shoulders and screens out wind like nobody’s business. 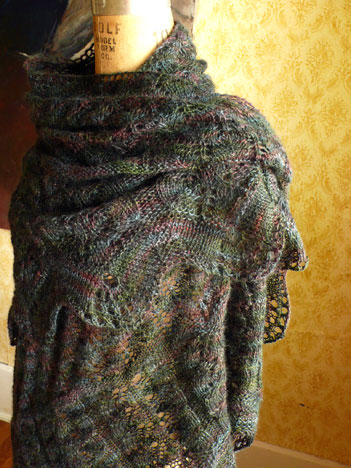 the great thing about a triangle shawl pattern is that you can play with yarn, needles, and gauge to achieve all sorts of different effects—there are few limits if you are willing to take a risk.

it’s going to look specTACular on kim, isn’t it? she’ll be getting it back in plenty of time to wear at rhinebeck so we can all admire it there 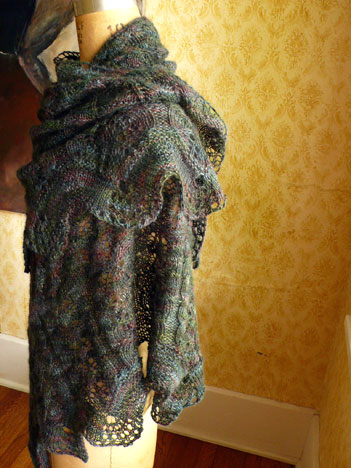 this pattern is an old favorite—i first knit it for my mom about six years ago, making it up on the needles as i went along. then knit one for a friend’s wedding, three years ago this month and finally put the pattern in writing as my first online pattern offer. and the knitspot pattern shop was born.

we had a race to celebrate and to raise some money for a good cause. for three years, i’ve enjoyed watching a fantastic parade of moths go by in classes, blog photos, ravelry photos, and photos that come to me by email; moths on their way to engagements, weddings, christenings, fairs, friends, and family. 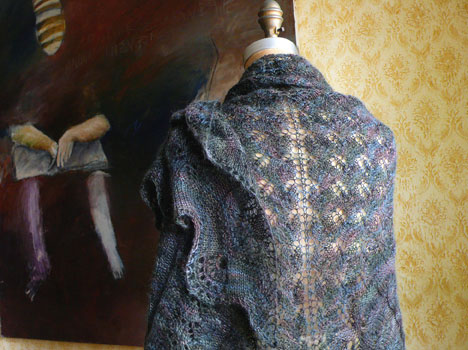 but i think i am most touched by this one that my friend knit—all good things in time. 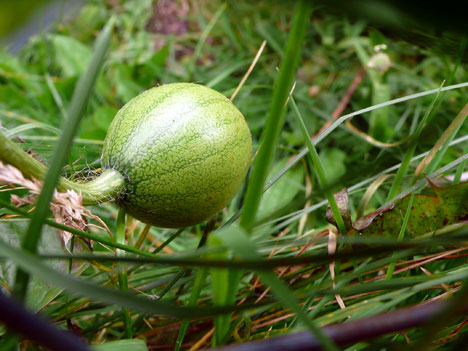