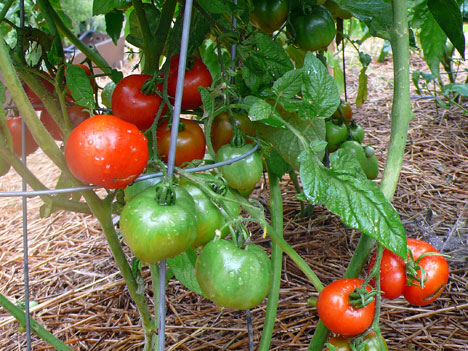 nothing all that new around here, but plenty to fill every minute of the day. i keep picking and picking stuff and the next day there’s more. thankfully, my friends are happy to take lots of it off my hands. i just can’t believe how much food is coming out of that garden this year. 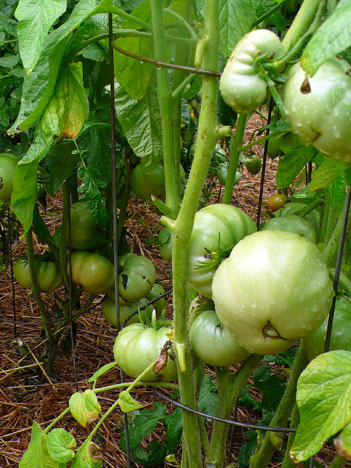 and not likely to stop any time soon. i hope everyone believed me when i told them to help themselves while i was gone . . . otherwise, it will be a mess of rotting produce out there when i get back. 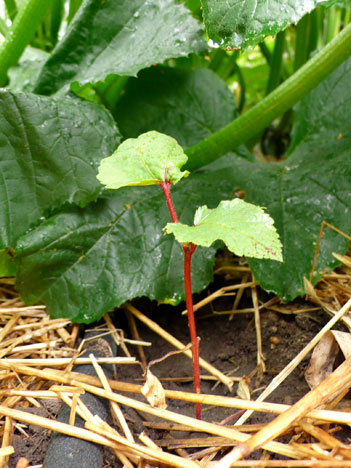 i can’t believe how much the okra transplants have grown in the two days they’ve been in their new home—they’re almost doubled in height. i started them from seed in a bare spot in the asparagus bed and it took quite a while for them to get to the size i thought was healthy for transplanting.

that, together with the fact that the asparagus is the one thing that’s not showing spectacular success, which makes me think we need to do something in that bed to get it up to speed. norma got hers going with rock phosphate, but according to our soil report, the phosphate is already high, so i hesitate to do the same. hmmmm . . .

i may have to grill david on what exactly he did when he aneded the soil in spring; he may have skipped that bed because it had plants growing in it—this would explain why it’s like last year’s garden only in that area.

obviously, it’s raining here today. we did have two pretty warm days in a row, but nothing like some of you are having. still, enough to get the tomato ripening jump-started. 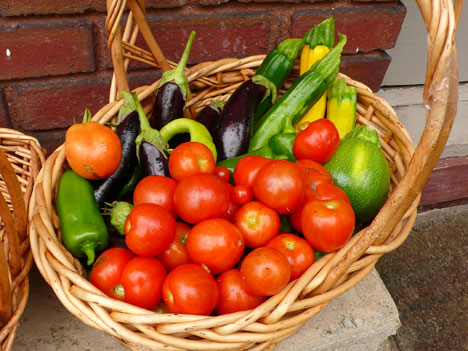 i’m kinda glad it’s cooler today, because i need to cook up and put away some of these vegetables. i’m thinking a nice pot of ciambotta will be just the thing to take us through a few meals in the near future. and i’ll roast up some more eggplant for the freezer while i’m at the stove. and i still have some beets to prepare for the freezer. i just can’t let myself fall behind on the produce.

yesterday i ventured out to the doctor’s for a check-in and on the way back, i took a few minutes to stop by a goodwill i had passed many times. i’d heard it was good so i stopped to investigate. i was looking for shirts and i found a great one, along with a few brand-new long-sleeved t-shirts (which are a staple for me).

then i scored something i didn’t even think to look for there. as i was turning from one row of shirts to the other, i noticed to my right a whole aisle of just baskets. in recent years i’ve trained myself to avoid these aisles because i can be a real sucker for junk.

but wow, now i am the proud owner of awesome garden baskets for the sum of just $2. my old plastic ones (the kind that come free with plants) have been breaking one after the other and i’d been putting off searching for something better. these aren’t just better, they are WAY better and cheaper AND recycled, to boot. nice.

meanwhile, on the fiber front 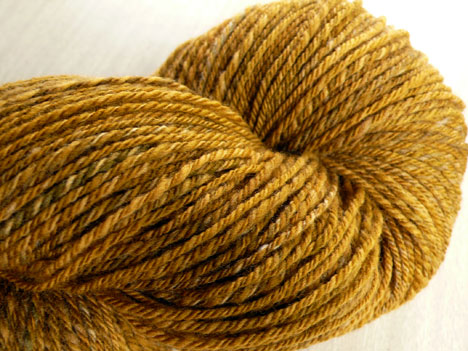 i did manage to get up early on monday morning, so i finished spinning my gold cormo. i even got it plied and put on to soak before class got started at 10 am.

it dried really well over the last few days. it’s so soft . . .
i had some singles left when the first of the three plies ran out so i dug up a couple of bobbins holding other orphan singles and just for fun, spun them together to finish them off 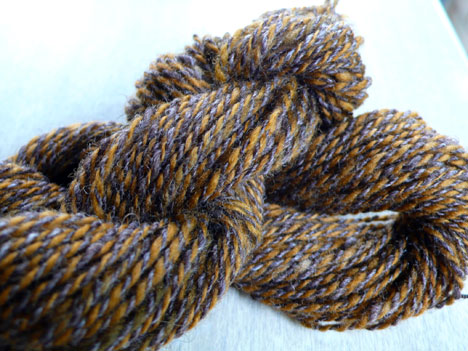 here’s the gold cormo plied with some leftovers from a sock yarn i spun last fall—it will make a great accent yarn when i finally knit those socks. i love the way the gold pops against the dark gray. 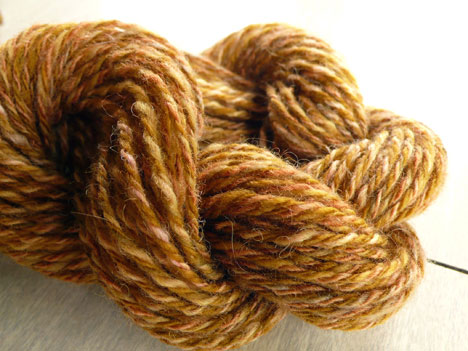 after the gray was gone, i joined on some leftovers from my 3-ply rhinebeck yarn, in hope spinnery fiber.

so lots of nice new yarn to add to the stash. i’m not at all sure what i’ll knit from the cormo but there’s plenty for a nice scarf or a mitts and hat set. that might be nice to go with my newest sweater . . . nah—too matchy-matchy. but maybe with jackie . . .

anne marie and beckie came over last night to hang out and anne marie finished spinning her coopworth fiber while we talked. so we are both all set now to start a new spinning project after the august break. beckie worked on her sweater and again, i totally forgot to take a picture (too bad because it’s really pretty).

i have been VERY faithfully focused on the Bee Thing in my knitting all week. i’m really close to being done with the body of the piece and finishing my third skein of yarn 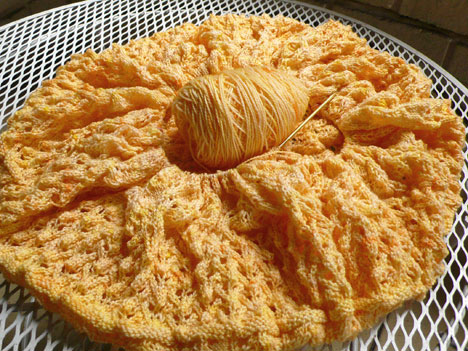 look how big it’s gotten! not scary-big though; i am assured by all the experts that no one ever wished for a smaller one of these. kim sent out a fourth skein of yarn yesterday that should arrive just about the time i need it. i’m always surprised at how much yarn a square piece uses; i need to get better at estimating these. 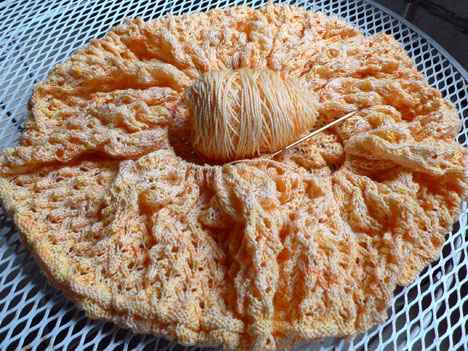 here’s a second photo of it, using different a light setting—i’ve been feeling a little like i’m not showing the color fairly because it’s really somewhere between these two—and the variations are beautiful in both. it’s probably actually closest to this detail photo

which someone here very accurately described as the color of peach melba yogurt. and it is just such an ambrosia of color flavors.

while i work on the Bee Thing, i’ve been putting some heavy thought into what i’ll take along on my trip. i’ll be gone a total of 16 days (i KNOW!)—obviously, i’ll need a lot of knitting. i was poking through the stash today, to try to narrow down my choices—why i thought THAT would help, i don’t know; i felt rather dizzily manic when i left the workroom.

i have two nate socks already packed and nightingale. i have another stole project i need to get going on (i might even start that tonight if i run out of bee yarn). but i don’t want to bring too many big things. i’m thinking about mitts and more socks, a neckwarmer, and ideally, i’d LOVE to have a little lace scarf along (or two). but that sounds like too much, doesn’t it?

we’ll have to talk about all that tomorrow. as with other things around here, the possibilities are truly mind-boggling—i don’t know if i can think about them all at once . . . 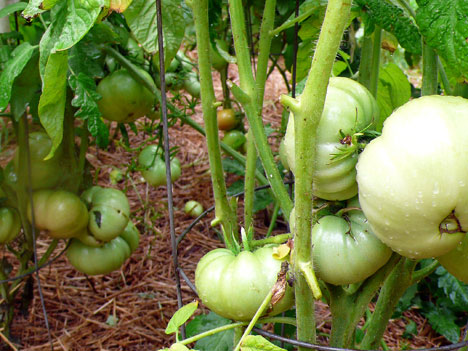 19 thoughts on “more of everything”