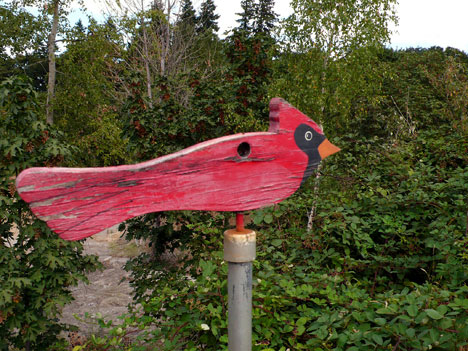 i know—i fell off the face of the earth. i’ll tell ya, once sock summit got rolling for real, it was nonstop the whole time. i made an executive decision not to answer comments over the weekend because it was always tricky whether my “send mail” was going to work (i think we’re figuring that out now—maybe). 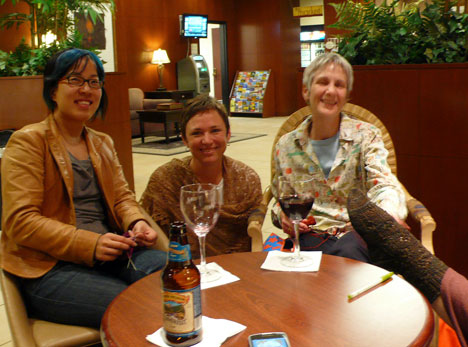 friday evening we had dinner with chris and cookie joined us at the hotel for some knitting and wine sipping. i finished the lady nate sock and gave it to chris to keep, along with the sample sock from the booth 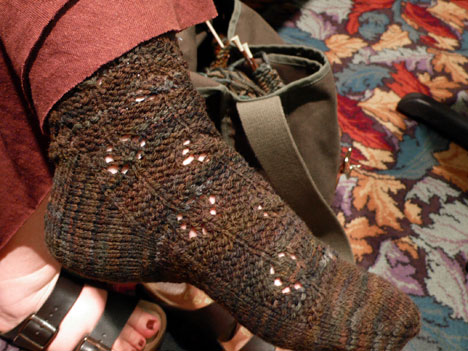 i think she likes them a lot . . .
they are really cozy and yummy in her new nate’s sock yarn.

saturday morning i met my friend gail for breakfast, followed by another all-day sock design class, but i forgot to take a picture (sorry you guys). i did manage though, to get some photos of my surroundings at lunch and dinner time. 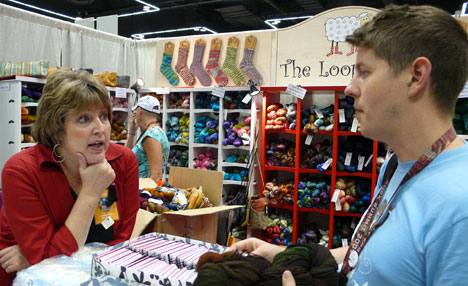 so many vendors that i knew were there—sheri is here with stephern houghton, author of the wonderful Y KNIT podcast, and soon-to-be knitter of a whitfield jacket. it was a blast to get to know stephen over the last few days—he’s got an interesting take on things 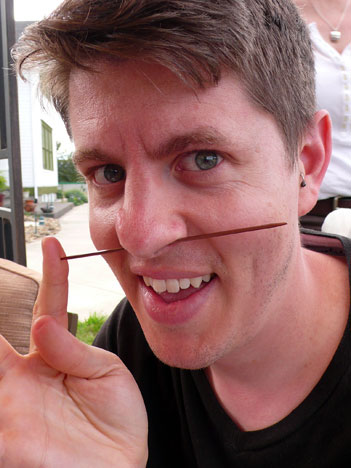 i also snapped this picture of our friend cheryl newhouse, the dyer behind the lovely new hue handspuns yarns. 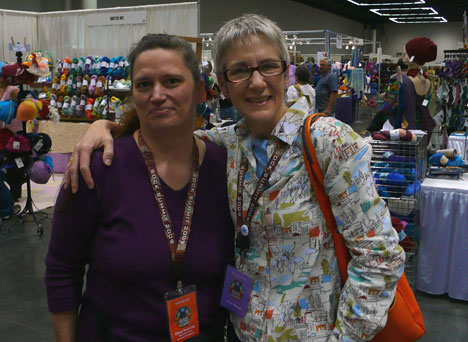 as i was running back to class after lunch i was stopped by deb kessler of fearless fibers, a long-time friend and admired dyer who i’ve never met in person. deb didn’t have a booth at the summit, but she made sure to take time from her visit to grab me for a hug and a hello. it’s SO great to finally meet friends like this; being in the pacific northwest was a great opportunity to see many, many long-time correspondents in the flesh. 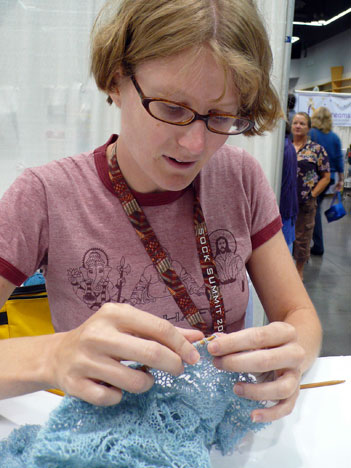 i did a little stint in the lucy booth after class on saturday afternoon where i was met by this lovely knitter (whose name i cannot dredge up no matter how hard i try) toting a BIG lace problem for me to help fix. i wish i had photographed every step of what we did, but i didn’t. basically she had a big hole in her lace and some other odd stuff going on. i unraveled a whole section, thinking to reknit it without ripping.

turns out that somewhere along the way, she seems to have turned the work and knit the other direction—somehow, she had 10 rows of work on one side of the mistake and 8 rows on the other (she did eventually cop to having a few beers while knitting on it one night).

i had the section of 8 or so sts pulled apart, but could see no way of reknitting them so that they could marry (some of the running threads were tranversing to sts several rows up on the other side). we made the brave decision to rip back, and with ronni’s help, managed to rip and rewind by hand without tangling anything.

i thought we deserved a beer by that point, so ronni and i headed over to chris’s hotel once again to join them for a pizza and wine party. i worked on the other orange nate sock; it was a fairly quiet evening, actually, with cookie joining us later on. 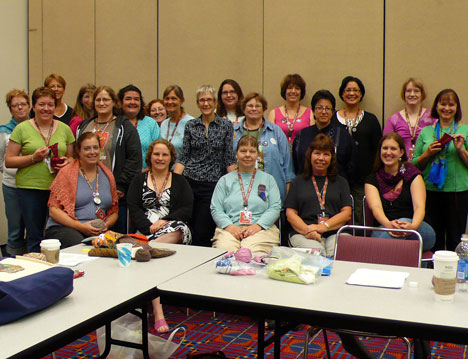 sunday morning we had another beginning lace knitting class which was really good—i was worried that so many people in it had too much experience, but it all worked out well and we managed to fill the time with plenty of material.

after class, we had a chance to go back to the market for a little extended visiting with vendors. up to this point, i had resisted buying or accepting yarn, choosing instead to browse and chat (because, you know—cough—i quite a collection of yarn at home).

but somehow on sunday afternoon, i weakened. it all started at the enchanted knoll booth—that josette, she’s a vixen with her colorways, hoo-boy (it didn’t help that i was walking the floor with cookie, either). i mean, her BFL sock—that stuff should come with a warning label.

i bought a few beautiful skeins there, then we visited miss babs and she gave us some, stopped by mackintosh yarns and she gave me some, and on and on.

some day i will learn to bring an extra suitcase for purchases but this time i didn’t and i ended up shipping a BIG tote bag full home. so we will take a look at all the goods when i get back there. 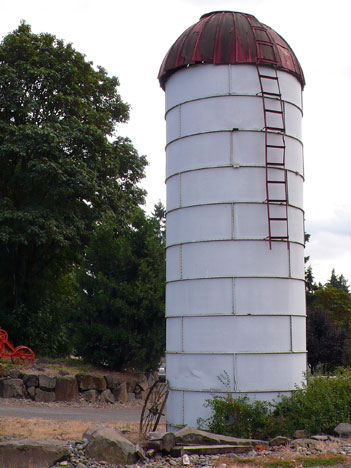 yeah, i’m not home yet, have i mentioned that? after the summit, i snuck off with a few people for a one-day “after” retreat in a lovely rural location near portland, 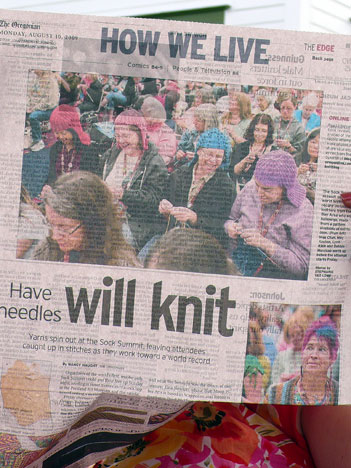 where i just knit and read the paper for one whole day. sigh. heaven, i tell you. 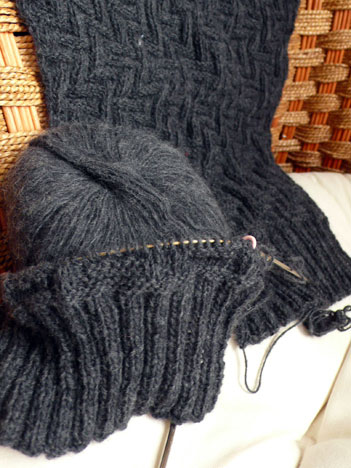 i finished up the first sleeve of my gray maze sweater and started the second sleeve. i think i might be closing in on a finished sweater here, guys—after 4 or 5 years on the needles, this one will be done soon, yay. 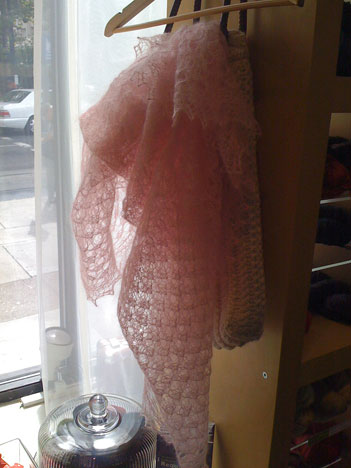 yesterday i spent some time exploring downtown portland with lucy, stephern, and syvia. we started out with a visit to knitPurl yarn shop, which has a lovely collection of seriously exquisite yarns, accessories, needles, etc. 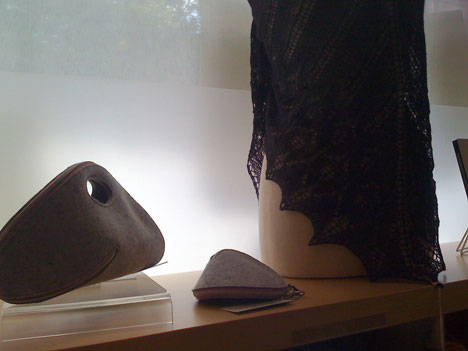 we all succumbed just a little bit, but i think stephen fell the hardest—a neat little um bag made its way home with him, along with a few books 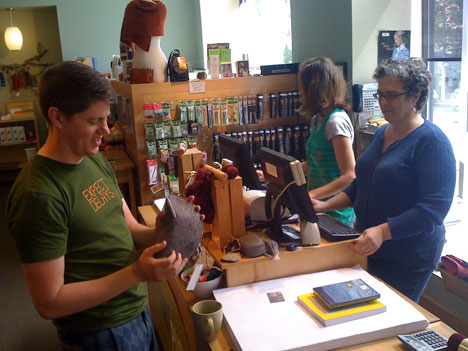 these bags are quite clever, unzipping completely to lie flat in a suitcase when traveling or storing them. 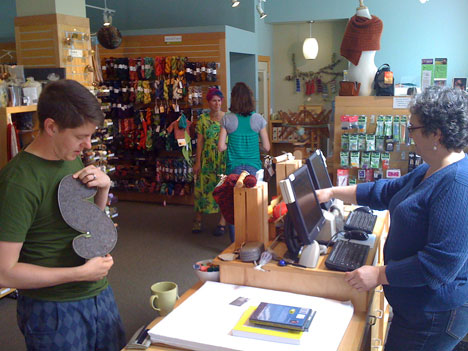 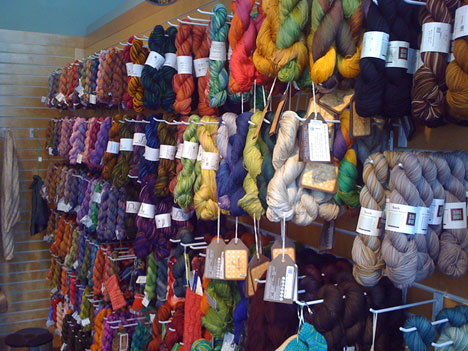 i think most of us managed not to buy sock yarn, but when it came to the lace display, syvia and i melted at the same time and steadfastly supported each other in purchasing something we liked (we totally bonded on this trip, what can i say??). 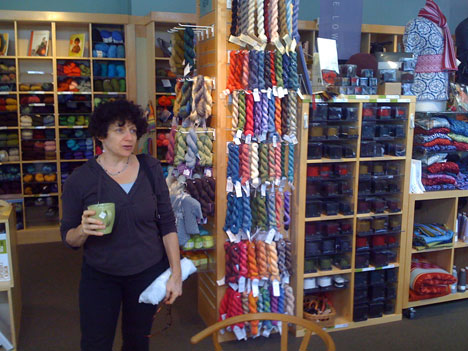 for her it was chameleon colorworks, which she can’t purchase at home; for me it was the realization that i didn’t have even a skein of lace yarn in my bag to play with on the plane. i found a beautiful 2-ply slk yarn and a ball of 2-ply cotton that feels like silk (and which i hadn’t seen previously, so i was curious. 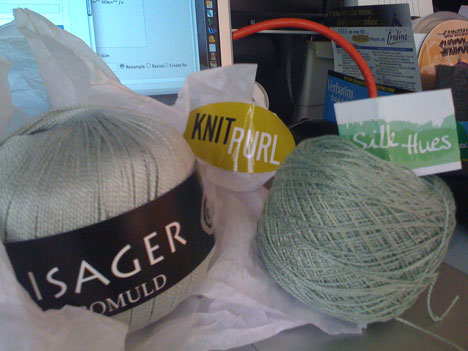 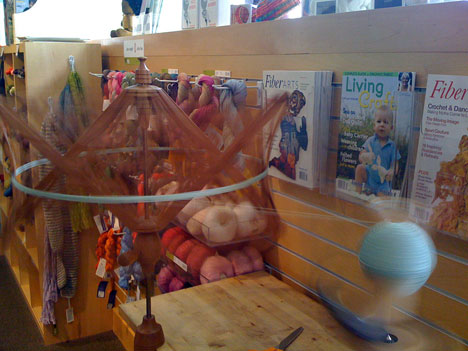 maybe a little too much equipment to have at home for jsut my own use, but awfully cool to be able to watch it work away in the shop, where it is in almost constant use. 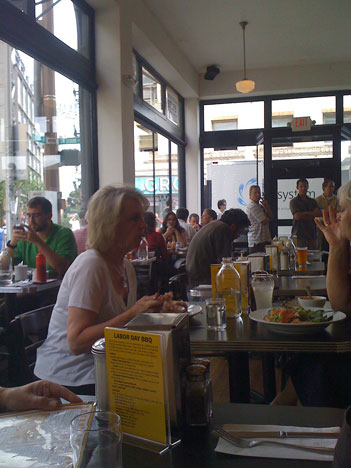 after we all paid it was time for stephen to head for the airport, but the rest of us mosied over to a nearby new york deli for lunch. i’m telling you, i could get used to this . . .

we took in the escher show at the art museum as well; it was real treat to go. david isn’t fond of spending time in museums but i love them, so this was a good opportunity to do that.
afterward, i had to head back myself for the airport, so i headed back to the shop where they were VERY graciously keeping our bags. 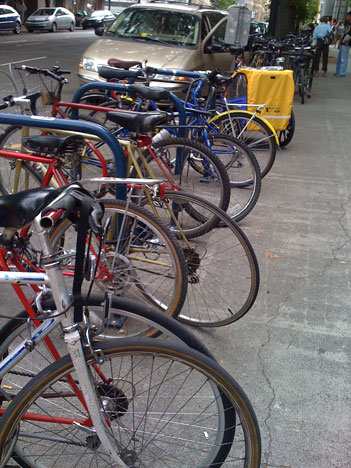 i’m looking forward to going back to portland some time; there was so much i didn’t get to see or do. i’m especially impressed by how bike-friendly it is there; i wish our city was like that.

in the airport, i took out my second nate sock. i’d been working away on it over the last couple days of sock summit—by the time the luminary panel ended, i was almost to the toe. 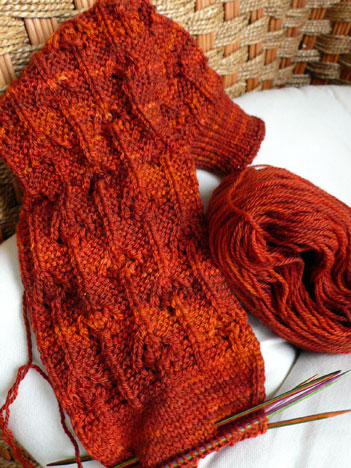 then i added another couple of inches the other night after dinner; i finished it off in the airport last evening. started and ended at the summit, very cool. david is going to love these . . .

so here i am at my next destination; i have a couple of really bad photos i took from the car window last night—can you guess where i am?? 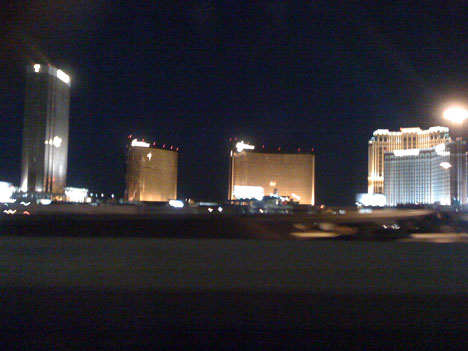 more about all this tomorrow; i really must get off the computer now.

47 thoughts on “where the heck have i been?”