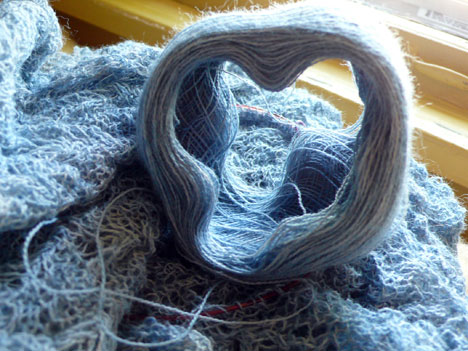 celebrating the growing chasm in the center of my lace yarn cake—just look at that . . i might be almost done soon (amazing how much faster a project goes when i actually knit on it). meanwhile the stole itself looks pretty much the same, so i won’t bore you with another photo of that, heh. 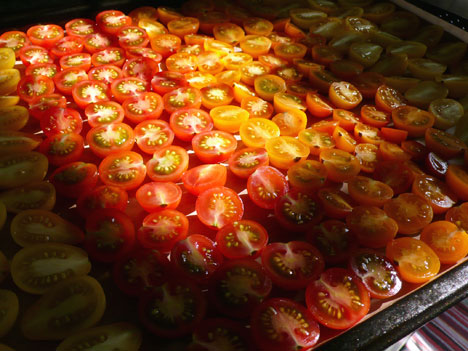 by yesterday afternoon, i had also caught up with the tomatoes; everything that was ripe enough had either been cooked or dried. this pan of multi-colored cherry tomatoes was just about to go into the oven when i snapped the picture—the first sun we’d had in days was lighting up each color with such juicy passion, mmm.

i’m a sucker for trying all different varieties of vegetables—this year i think i planted 12 or 14 different kinds of tomatoes, just one or two plants each. i like to compare them with each other for flavor and in the big ones, there are major differences sometimes. the funny thing is that of the small ones, i already know from experience that the red ones are the sweetest, but i insist on growing all the colors just for variety (even in the case of ones i don’t care for all that much).

i have these really ugly big tomatoes that i’ve been avoiding all summer—they are grayish greenish pink (i swear) and lumpy and really, really unattractive—they never look appetizingly ripe. but i found one split open the other day, so in order not to waste it (i have a thing about not wasting food), i sliced it up for a sandwich.
oh. my. gravy. it was spectacular.
and the plant it came off of is full of them (i think everyone else has been avoiding them too, hehehe). 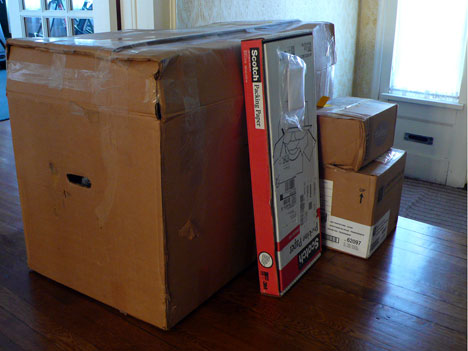 i’m not really sure what the heck that box contains, but whatever it is, it’s NOT my yarn from sock summit. the cool thing is that my big box of sock summit yarn arrived with it (far right) and it looks positively miniscule next to whatever that is.
not that david cares, but it makes me feel a little better.

i meant to open and photograph that yarn box for this post, but then the day passed and it was getting dark before i knew it—tomorrow we’ll do a yarn parade, ok? a little post-summit replay, if you will (i did come away with some beautiful yarn . . .)

i’m compiling a bunch of stuff to send ot my SIL, nan, to fuel her budding knitting habit. i have loads of sock leftovers that she can use for baby and boy-sized socks and little hats as well. i need to write a simple set of hat instructions for her—i told her a hat would be a nice diversion if she tired of socks and that baby hats are a snap to kit (and micah will need some). now i have to distill the pattern to a few simple steps and knit a sample that she can follow (she’s really good at seeing what she needs to do from a knitted piece).

ok, now that i’m several paragraphs into this post, i’ll be right up front about it: i don’t have much sharable knitting today. i did start a couple for new projects, but two of them are gifts and one has to be a secret for a little while longer (not too long). 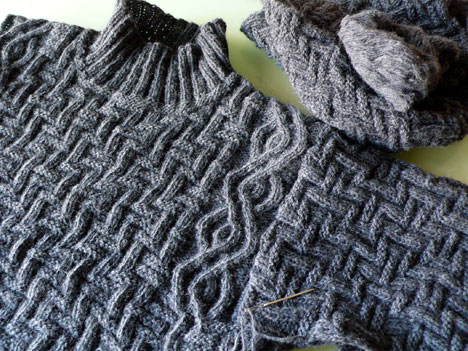 everything is fitting together just fine—all i need now is to sit and work on it during daylight hours one day this week so i can get it finished. it’s a little difficult for me to see at night, unfortunately (and i’m committed to finishing nightingale at night).

just before i left for sock summit in the beginning of the month, we found a great deal on a new town bike for me. i’m still using my beloved old bianchi, but the gear shifting on it has been shaky since last year. we looked into upgrading/fixing it, but then david found this new bike with the gear system we wanted for 55% off—about what the parts alone would cost 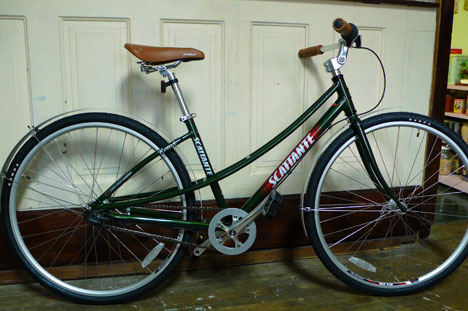 i was unsure about the fit, but after taking back to the shop today for a little comparison with another bike, i think it’s going to work well. tomorrow i can take it for its first really hard ride.

BTW, there are great deals everywhere on bikes right now; if you’ve been thinking about switching to alternative transportation and/or looking for a great exercise option, this is your chance.
biking is a wonderful way to get around town and to stay in good shape. i live in a city that is not at all bike-friendly, but riding is still my preferred method of getting from here to there. of course i don’t usually ride my bike on the same routes i would drive, but it’s not hard to plan alternative routes that are safe and enjoyable—bikes can often take shortcuts that cars cannot. biking also save tons of time because you are combining commuting with exercise.

i was very impressed while visiting portland that so many people ride bikes everywhere. i really wish my city was more like that . . .

ok, well, i think i said something about needing to knit—since i’m caught up on almost everything else, now is the time i guess. 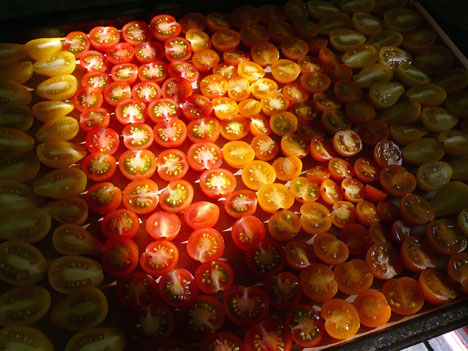 31 thoughts on “light at the end of the tunnel”