this weekend, the last “outside” renovation project for our house was begun and no one is happier about it than me. until now, the two “wings” of our first floor have been topped with most hideous porches, jerry-rigged by some self-proclaimed “carpenter” before the time we moved in. at their best, they looked like this: 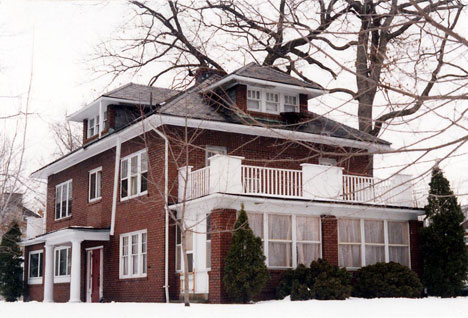 it’s not that we didn’t want to replace them immediately, but, being mostly a cosmetic change (at first), it was relegated to the back burner while we addressed more pressing problems, such as the 95-year-old roof, faulty gutters, the complete absence of storm windows (seriously, in ohio?), injurious stairs, and uneven walkways.

in each fall of the last seven, i have said, “in the spring we will replace the second-floor railings”. and each spring we have decided that another job must take precedence. since everything we do to the outside of the house costs thousands of dollars, i’ve had to be very patient about the railings. i’m thrifty and a good saver, but not good enough to do everything in one year.

this is the last outdoor project left to do, now that the stairs are finished (landscaping doesn’t count—that’s gravy for now, heh). we though we could wait til spring, but the porches are not giving us a reprieve.

constructed entirely of indoor plywood and other materials not made to withstand the elements, the railings have, over the time we’ve lived here, deteriorated to the point of embarrassment and even danger, as pieces turned green, then black, then rotted away entirely in the damp shade of the oak trees. i awakened several times this summer to the gentle sound of a spindle letting go and thunking to the ground below.

at the end of last week, a whole section of railing plunged into the back yard in a craptastic shower of moldy, mushy wood, nails, and splintered paint. 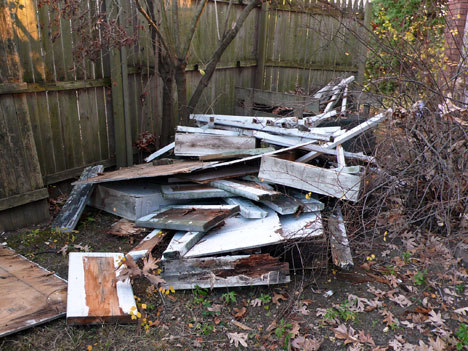 so saturday and sunday, in that fine, dry, fall weather that roofers live for, david set about finishing the demo job. the weather probably won’t hold long enough for us to get the railings up now (the temperatures are already plunging today), but we’ll be all set to tackle the job in march or april.

i like it better already.
now we just have to decide what to replace them with. we both tend to gravitate toward stylish, expensive, and green materials; it’s up to me to shepherd us in the direction of a “creative solution” with an eye on the budget—see the problem? it won’t hurt to have the winter to research our options.

while all that was going on outside, i spent the weekend trying to catch up on knitting, pattern writing, and cooking inside, while beginning to prepare for our trip later this week. i want to get a little ahead on patterns and finish up some WIPs before we leave (mostly so i can start a couple more to take along, hahaha). 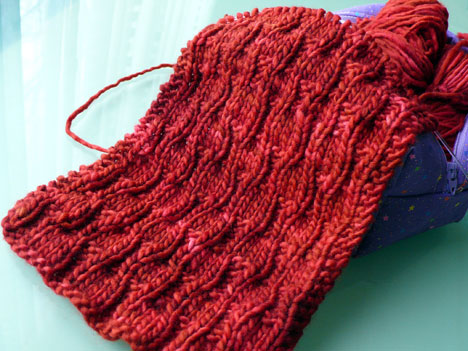 the paris-roubaix scarf i’m knitting for the red scarf drive has been in my purse for the last two weeks; i take it everywhere and add a few rows here and there whenever i have to wait for something to happen. last thursday, i added an inch or two while chatting with susan and cookie at lunch. then friday night i knit a few rows in the chiropractor’s waiting room and a couple of inches in the parking lot at home depot while david did errands (he parked under a light so i could see better, hehehe). 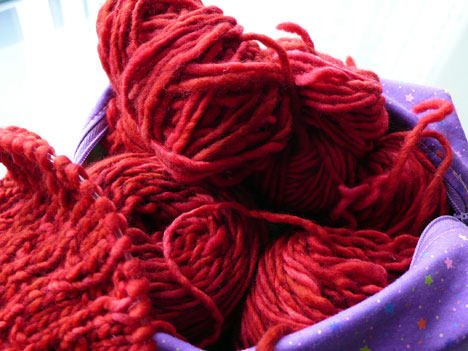 i have plenty of leftover red malabrigo for a nice long, soft unisex scarf. and since i’m knitting on size 8 or 9 needles with worsted weight yarn, it’s zipping along. it should be done in plenty of time to send off before the december 15 deadline. i’ll add a couple of gift cards and a card to my gift. these care packages go out to hardworking college kids who have aged out of the foster care system and don’t have family support; sending a handknit gift to one of them feels right to me.

if you’re interested in joining the scarf drive, PLEASE read the information in this post on the red scarf blog. note: there are a few rules in the right-hand sidebar for knitters; it’s really great when everyone follows them, thanks!

if you’d like to make a donation to the red scarf fund, you can read about their goals and make a donation here. your dollars are very much appreciated and norma is making sure you know it, by giving away all sorts of raffle prizes for donors at her blog. 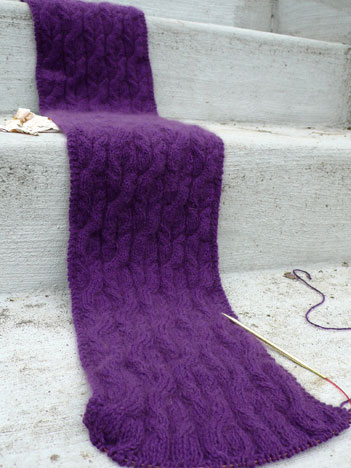 in other news, i’ve come to the end of the road with my purple mink yarn—three rows short of the scarf’s end, argggh (ETA: my friend susie just emailed to say she has some purple—can we all give her a big hug now?).

it’s the most decadent scarf i’ve ever owned. the best part is that i don’t feel “precious” about it—i know this will get plenty of use. 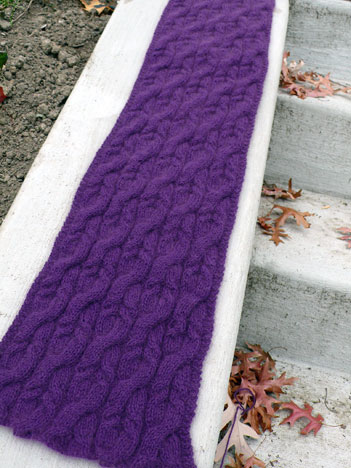 i adore the stitch pattern—those plump, sexy cables just beg to be wrapped around something, don’t they? and the matching beret . . . i think this time i got it.

i cast on for the hat the other night and after ripping back the first three rows about four times, i finally settled in to a good rhythm. i was hoping to get the smaller hat out of johanna’s leftovers and a small leftover amount of my own 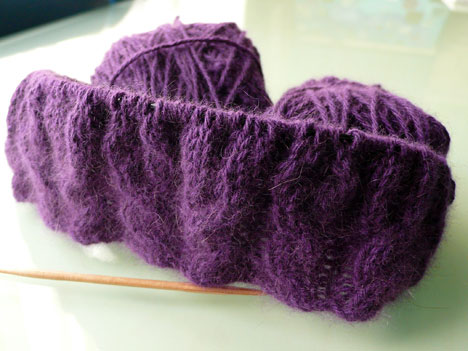 but i had to steal a little yarn from the scarf skein to finish (well, that came back to bite me in the butt, didn’t it?). last night i completed it and now it’s soaking. 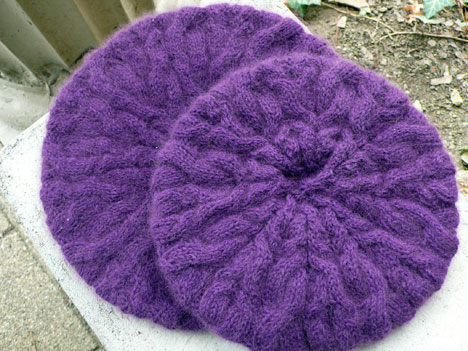 (i love the cables!)

if you imagine the hat as a pie, with the larger one having five wedges, i reduced the size of this one by subtracting a wedge. the resulting hat is proportionately smaller in diameter 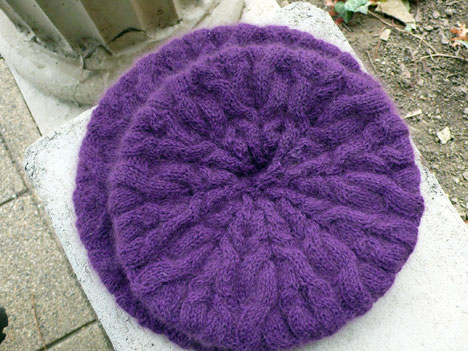 including the opening, for those of us with small, nutkin heads 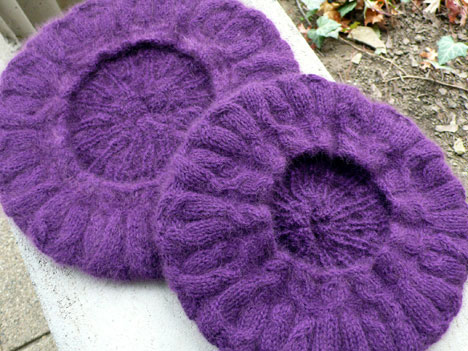 it fits great—i’m really pleased to have worked it out. it’s snuggly-warm and cozy, and so light; it won’t be crushing my hair. 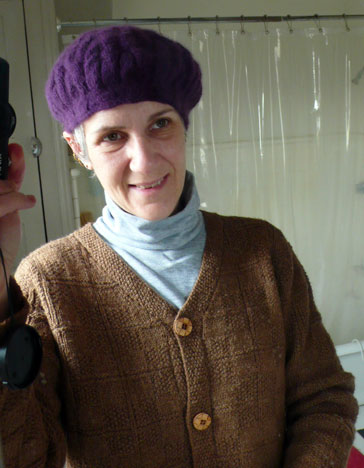 this thing stays perched right where i intended it to sit, without slipping down over my ears and eyebrows. finally, a hat i can wear out of the house. i wonder if my mom would want one of these?

i have all the information i need to finish up the pattern now, which will include the scarf and the hat in two sizes. the set requires three skeins of great northern mink yarn; one for the hat and two for the scarf. i should be able to release this pattern some time in the next week.

so, that’s one big project off the needles—gotta tackle a few more. i have an embarrassing number of WIPs at the moment; we’ll do inventory on those tomorrow—i won’t get through this post if i talk about them today.

i reworked the tealicious mitten and now i like it a lot better; the top was sort-of awkward before and now it looks cute. 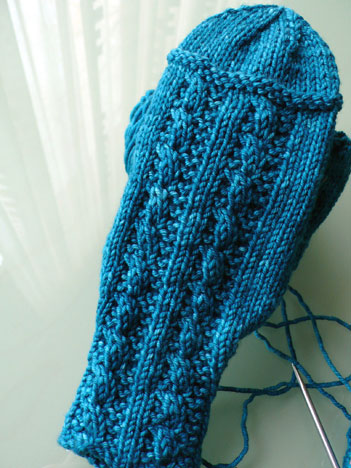 i started the mate for it, too. i need to make a pair in my own size—this first pair is the small size and doesn’t fit me correctly.

the matching hat on the needles and progressing quickly as well 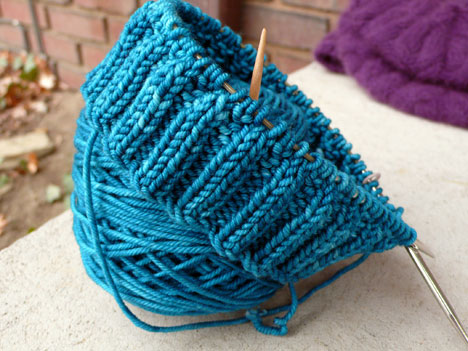 another easy on-the-go project that will be great for traveling—i can take these things along when visiting or riding in the car.

stocking up on finished mittens is a good strategy for these pre-holiday weeks—they are really quick to crank out (especially in kid sizes) and everyone loves or needs them.

barb is having an affair with fingerless mitts at the moment, getting a huge kick out of knitting with her handspun yarn for the first time. she showed up at spinning class yesterday with two new pair. 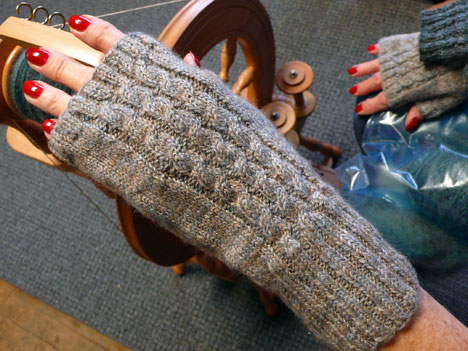 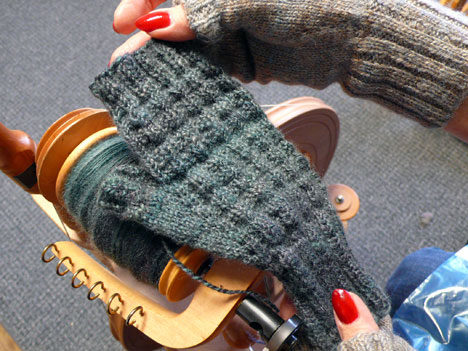 the second pair is a set of hot waffles, knit up in a light DK yarn spun from some blue-green briar rose BFL (same stuff she has on the bobbin now). nothing feels more cozy than knitting with yarn you made yourself. sigh.

now, it’s time for me to get ready for class—i’ve also got to sort through my projects and get things in order for packing on wednesday. i’ll tell you all about our upcoming travels next time.

28 thoughts on “i love them most when they’re gone”