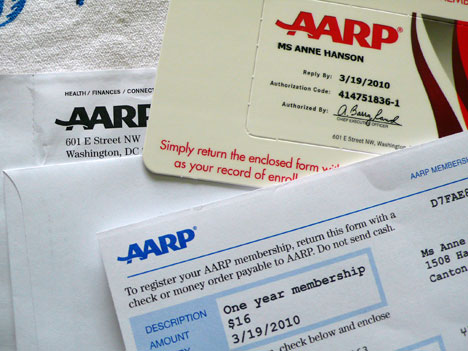 ok, yes, i’m coming up on a BIG birthday, with a zero attached to it, but come on—an AARP membership?? did they have to deliver it on my last day in this decade? hahaha, life just has the most uncanny sense of humor, doesn’t it?

i can laugh about this because i’m still too young to join, heh, but not for very long.

i’m going crazy from too much secret knitting and too many socks on the needles, but i’m determined to finish some of them off so i can move on. i mean, i like socks—i do; i love knitting them. but all socks, all the time—that’s too much of a good thing (david may beg to differ).

it’s my own fault and i know it.

actually, it’s not all socks, but there are quite a few more than usual. something tells me that my olympic project could end up being a heap of second socks . . . between what i have on the needles now and the pile of single socks sitting near my end of the sofa, i could cloth the whole family if i’d just turn them all into pairs.

the longjohn sock is shaping up just as i’d hoped—it looks like the sleeve or leg of a real set of longjohns. the thermal stitch will trap heat to keep feet warm and cozy without bulk, which is just the sort of sock i need.
this is an easy-going, take anywhere, don’t need a chart (don’t need a brain, practically) project. it’s the one i can drag around everywhere with me for something to do if i have to wait.

and good thing too—i have enough yarn to knit four of them. beautiful shalimar zoe that is bouncy, soft, hardwearing, and comes in myriad fun colors, both variegated and semi-solid. later tonight, i’ll cast on the red version of the sock so we can see what it looks like. 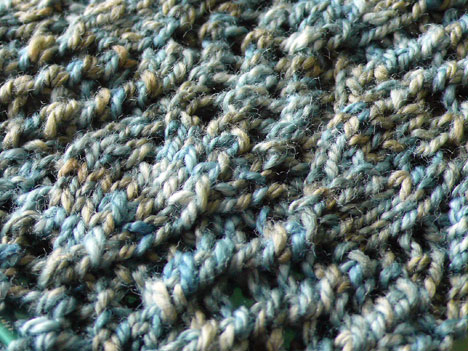 here’s a peek of one of my secret projects—not telling what it is or where the yarn is from, though. just a little taste, ok? 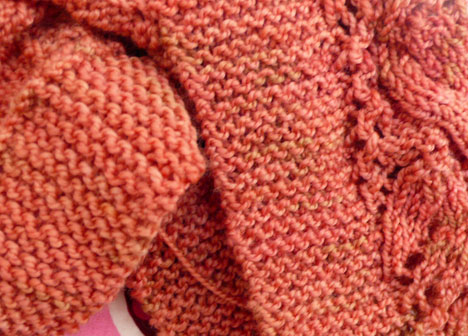 here’s another little glimpse of something i’m making—gorgeous color, gorgeous yarn, not a sock, but i’m not telling what, either . . . it’s almost done, too, yay. 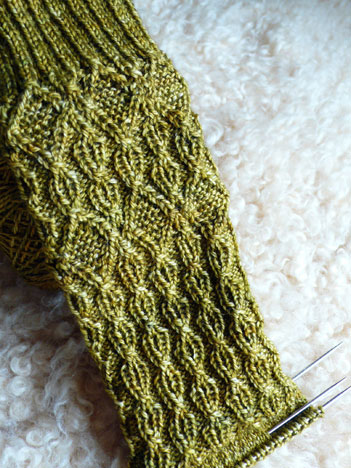 here’s one that we can talk about and i’m really happy to be able to, because i love the way it’s turning out. this sock is knit using woolen rabbit kashmir, an incredibly lovely yarn with all good points from our friend kim. it’s got bounce, it’s got sheen, it’s got cashmere, for heaven’s sake—and as if that wasn’t enough, it’s got nylon, too, so it won’t wear out the minute you start walking around in it.

i’m trying to decide on a name for this one—at first it seemed obvious to pick a name based on how the patterns intertwine, but now that i’m down the leg and into the heel, it’s starting to remind me more of a beautiful gilded picture frame or birdcage or an antique wire cage dress form. hmmm . . . i might go with something like la cage d’or instead. 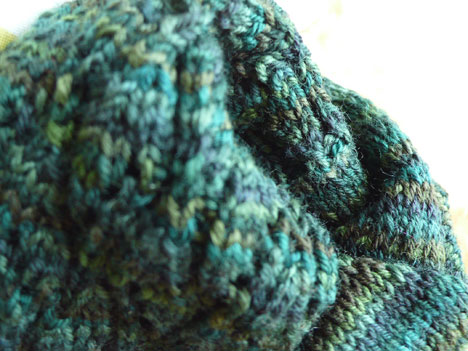 more secret knitting (see? i told you there was a lot). this one has a sibling in a different color, too, so they are double the fun. it’s knit in one of my favorite affordable yarns, so i don’t mind at all knitting it twice.

in other news, david is making great progress in demo-ing the second half of my studio space 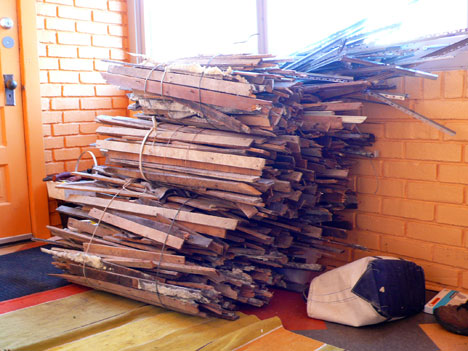 a couple of the walls have three layers of drywall to take down and discard, plus the dropped ceiling and some plaster—many bags of debris are exiting the house this week. pretty soon he’ll be able to start rewiring (thank goodness).

i think that’s about it for today—i probably won’t be here tomorrow, because hopefully i’m taking most of the day off (and hopefully, spending it on my little rose shawl, which i’ve been denying myself), but i might post a festive photo or two if the opportunity arises.

83 thoughts on “sorry, not there quite yet”