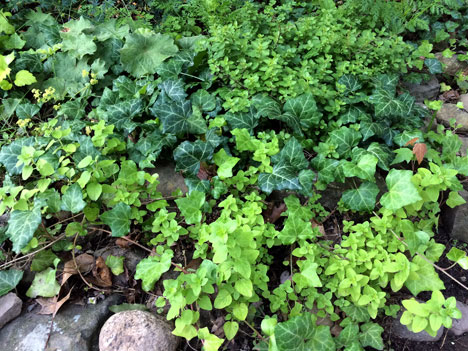 our area was literally engulfed in rain during the time i was in new york and for several days after my return. it was so dark and dreary in fact, that i caught myself dozing off at my desk at the most unlikely times (like 9:15 am after waking up at 7!).

it wasn’t all bad though—our garden certainly got off to a healthy start with all of that delicious rain to feed it. but the weeds also benefitted and by the weekend, things were looking more than a little bedraggled out there. 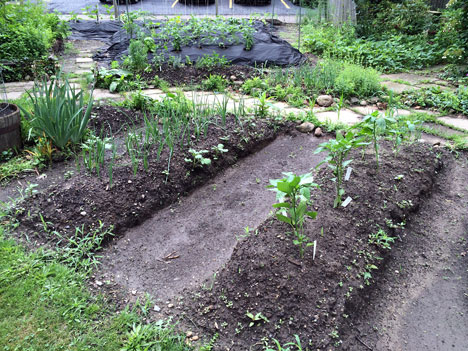 so when the skies cleared on monday and actually stayed that way into the evening, david and i made it our business to get out to the garden for some much needed cleanup. 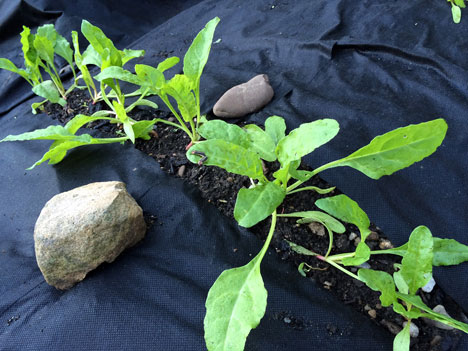 when i first got home last thursday, the swiss chard were mere sprouts, an inch high with a couple of cotyledons. by sunday afternoon they were six inches tall with several sets of true leaves and in dire need of thinning. i knew if i didn’t get it done on monday, it would be several days before i would be able to get back to it and by then the roots would have set, making the job more difficult.

so first i got to work on that, gently removing seedlings that were growing one on top of the next. the largest and most intact ones i replanted all around the garden, wherever i could find space; i figure they should “take” somewhere or other. there almost can’t be too many greens  . . . says she.
(i love greens; they are my favorite garden thing and i could eat them every day. that said, i have almost no time to deal with a boatload of garden produce each day, so we shall see!)

there were many, many seedlings that were much too small or broken to transplant; these i placed in a small basket and plunged into an ice bath inside the house to soak and wash. after our garden work was done for the night (essentially, when it got too dark to see), we made big salads for dinner and used these as an ingredient. tiny green sprouts like these are one of the most nutritionally dense foods you can eat—go us. 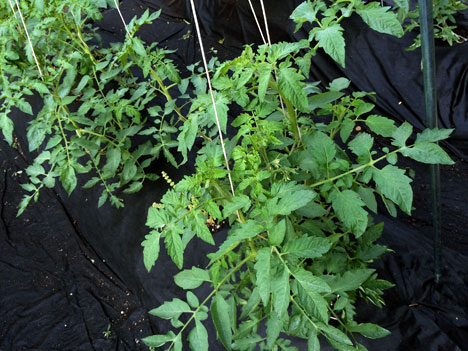 the next thing on my agenda was pruning the tomato plants. tomatoes produce best when they have few leggy limbs to divert energy from the fruits. lateral growth should be nipped in the bud because it encourages overgrowth of leggy, nonproductive limbs. this takes some time but is SO worth the trouble, especially if you are gardening in a smaller space. i will refer you to the experts for actual advice, demonstration, and illustration of tomato pruning:
CLICK HERE TO READ MORE ABOUT PRUNING TOMATOES and CLICK HERE FOR VIDEO 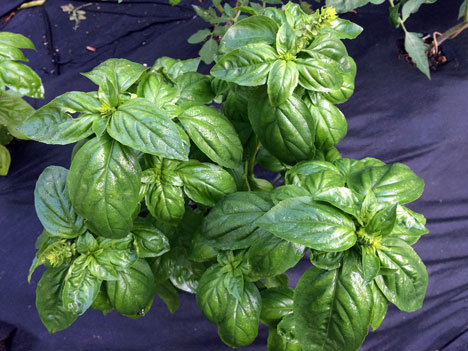 our basil is doing wonderfully this year as well—david interspersed it with the tomatoes and it seems very happy (unlike our previous couple of years, when most of our basil failed). you might have noticed that he also put down some black cloth to discourage weeds—something new for us. it will keep some moisture in the soil on hotter days as well and help the mounds keep their shape, too.

BTW, the mounds really showed their advantage during the rainy weeks—the soil drained very well and there was next to no puddles laying around the garden (and by extension, very few insects or nasty fungus). 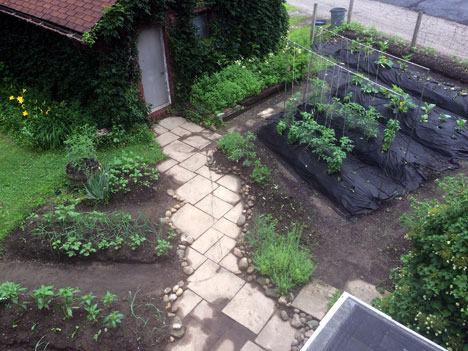 this morning i was up at the crack of dawn and went to visit the garden for some photos before the sunlight got too harsh. still damp out there, but with everything weeded, thinned, and trimmed up, the garden looked much, MUCH better. 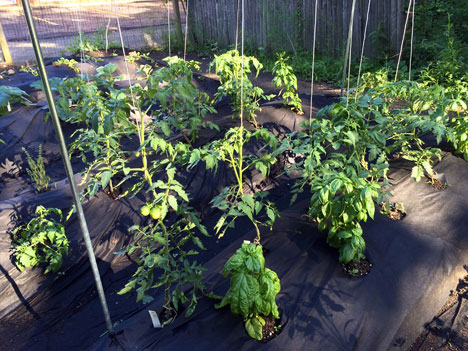 tomatoes looking strong and straight, with plenty of space around their stems for air circulation (the better to keep fungus away). 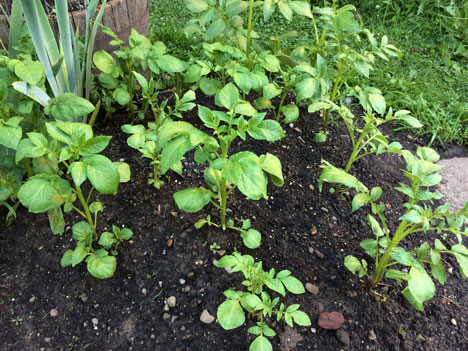 potatoes growing taller by the hour—they are looking super this year as well. we plant everything in rotation except for the tomatoes (because of their growing frames, we will move them less often). this year the potatoes are in the area where i had greens last year. 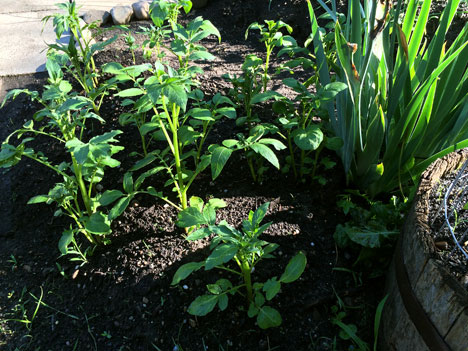 the greens kind of failed in that spot because the earth was so heavy that they couldn’t put down a good tap root. this year we planted potatoes there instead, so they could go to work breaking up some of that clay soil. david made mounds on top of them planted with onions, leeks, and some peppers; garlic is also nearby. with all the root vegetables in one place, we can rotate greens over there next year (leaf follows roots). 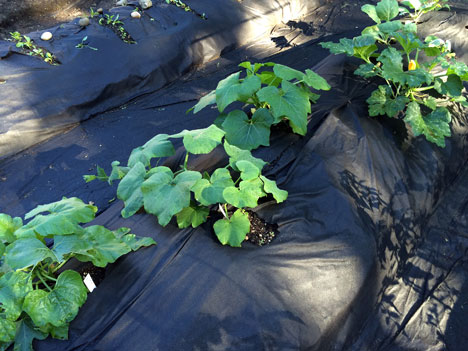 on the other side of the tomatoes, closer to the back street, we have rows of squash, eggplant, beans, and greens. the squash is looking very well so far; fingers crossed that it stays that way.

we have a great variety of squashes in all shapes and colors. another vegetable i love to cook with when it’s fresh form the garden—hopefully, it won’t be long before these first ones are ready.

look at my eggplant!! i am so pleased over this one—i would have picked it by now but i really want to take it just before i’m ready to cook it and that will be friday night, for either a thai or indian curry. my mouth is already watering. round and oblong eggplants are also on their way to go with the squash into large pots of ratatouille. 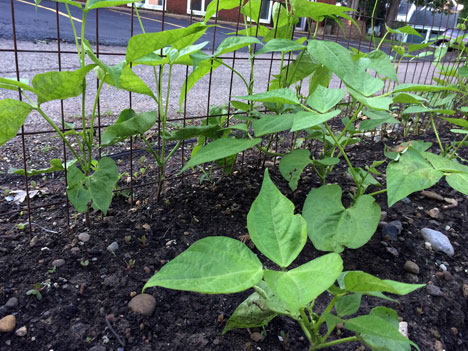 and last but not least at the very back of the garden, my green beans have started climbing the fence—they are on their way and looking good. we just have to make sure now to keep those weekends free in late july and august for putting stuff by when it all comes to fruition. 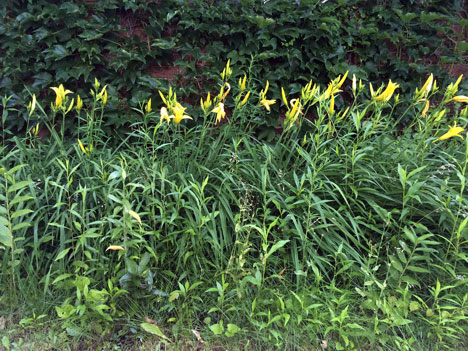 remember what i said the other day about those lilies? there you have it, they are blooming. 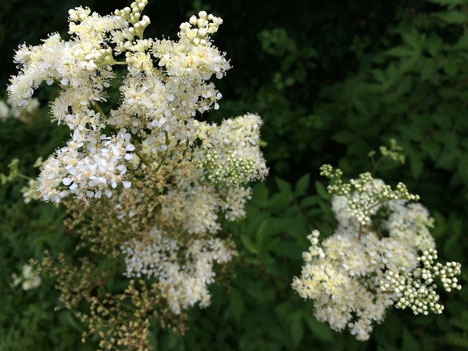 around the corner, the dye bed is exploding with meadowsweet blooms—how beautiful are these? 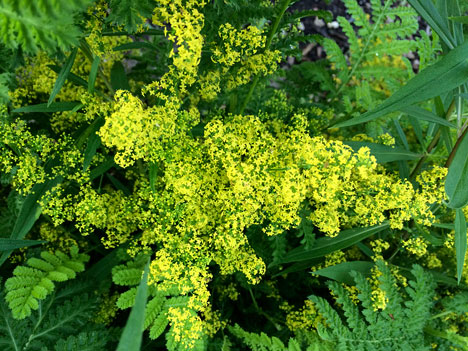 they are complemented by tansy, also in bloom—no wonder i’m almost choking on pollen, haha. 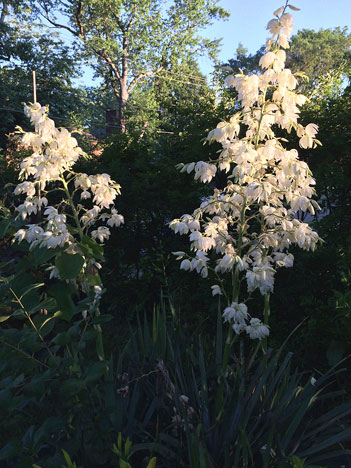 out near the front of our yard, the yucca is heavy with flowers as well—i remember when we moved here and this plant was a single short stem; these are well over six feet in height, maybe seven.

i know that these are the best days of gardening, when all the plants are still growing and the weather hasn’t gotten to them. june is so beautiful, but july can be very, very hard on them. let’s hope we don’t have too many big temperature swings or overly dry weeks; i would love to have a successful garden year for once, haha; the last few have been discouraging. 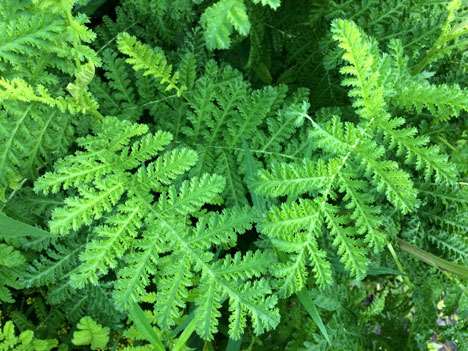 it’s positively inspiring, to be able to look, touch, smell, and dream on all this luscious green. and you know where i’m funneling all of that inspiration, don’t you? if you guessed ENVY club, that would be correct. excitement is ginning up over in our ravelry clubhouse—if you need a little taste of what’s to come, i highly recommend a visit there, haha. kat is bubbling over to know what we’re going to knit first—let’s keep her company while she exhausts herself guessing, haha.

signups for ENVY club will close in one week; we have some single spots and some double dip upgrades available now, but when they’re gone, there won’t be more. our yarn orders for the entire club are now finalized—get these last ones before someone else does!