sorry, i just couldn’t come up with a more clever title today . . .

i don’t have any new knitting pictures to show; i am making progress on all the same projects i photographed during the week (obstacles shawl, waterfall socks, red sweater, etc), and found myself just a little disinterested in taking more pictures of them for today.

instead, while downing my second cup of coffee this morning, i skeined up the yarn i had plied earlier this week, got it counted up and washed it. 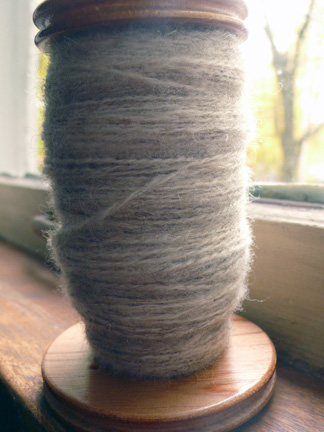 just 1.5 ounces produced 200 yards of lovely, soft yarn. i want desperately to get a new hap shawl done soon—something with just a bit of a twist, but not enough to make it NOT a hap shawl. so this yarn will be added to the array of small lots of natural shetland i have sampled from her flock (and maybe i can even weedle a few more “sample” amounts from her!).
since beckie is moving from the farm, and recently sold her flock, this project will commemorate the shift, and hopefully do justice to the gorgeous fibers she has produced over the last five years or so.

here it is skeined up, next to the wool-and-silk fiber from Three Bags Full that i also spun last week. 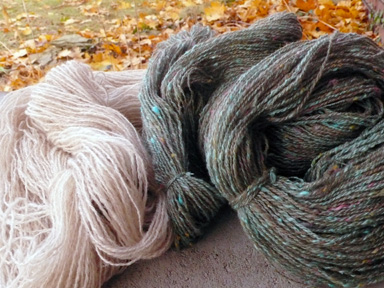 that three bags full fiber is my muse for the moment—it is soft, bouncy, poofy, and lit UP by the tiny stream of turquoise bombyx silk running through it. i had a 4-ounce bump, bought at rhinebeck, which i spun in a very, very fine singles, then plied. 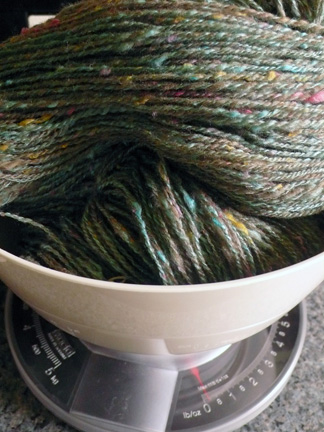 i won’t bore you by adding anything to the pictures “for scale” (isn’t the actual scale enough?). i know it can be helpful, but a recent email exchange with stacey opened my eyes to the fact that blog pictures are never really indicative of a yarn’s qualities, no matter how enticing or accurate we make them.

stacey and i were discussing the yarn she wanted to spin for her hypoteneuse project. she was trying to get a better idea of what weight the yarn should be, and i mentioned that it should be like rowan’s felted tweed. she was surprised, because she thought from the pictures of the piece that the hypoteneuse yarn was much heavier. only when i showed her this picture 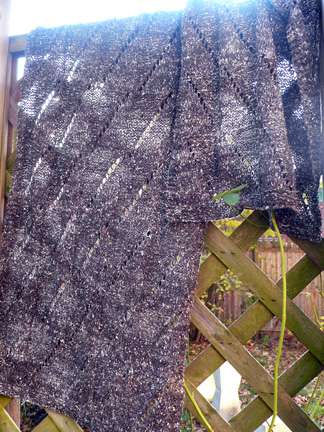 did she realize how fine that yarn was, and how sheer and light the shawl actually is. it literally weighs only a few ounces, but apparently in most photos, it appears to be much heavier. so using dimes and other small objects to convey the yarn scale doesn’t seem to make sense.
i guess we’ll have to wait for squeeze-surround to more accurately show off a yarn . . .

i received a couple of new books in the mail today that i’ve had my eye on for a while. i’m pretty excited about arctic lace; i have intense curiosities about how and why certain kinds of knitting develop, who is doing them, and where in the world knitting activity is happening. and this book promises much.

it is not a “pattern book” for which i am grateful. not that i don’t like patterns, but i want information more! and i wouldn’t want any watered-down-for-today’s-knitter version of anything, so, better to go without.

you can see i also picked up the new vogue stitchionary, mostly to complete the set i have going. i don’t do a lot of color knitting, but sometimes i indulge. and, sometimes, color charts make for great knit-purl combinations when the other 567 existing out there just won’t do. i got a few gift books, too, which i won’t show you—you never know who is reading my blog!

and then, i topped off the book thing with a real treasure—something i’ve been wanting for a couple of years, ever since it was reprinted from the original. this one actually kinda trumps the other two for me today—just because it makes me happy to look at it.

i mean, who wouldn’t get a kick out this? ha! i love these graphics, and don’t even get me started on the styling of the photos. here’s a taste of what’s inside

that last one just makes my heart swell! and did you notice the detail on those story book cookies? who thought up all those variations on plaid scotty dogs?? i want to know them!
books like this make the designer in me very satisfied—all that meticulous detail to convey the goodness (and the art) of homemade cookies.

because our home is a construction zone, our living set-up requires that i keep most of my cookbooks in the entry hall, rather than the kitchen (at least for now). but this one is going right on the shelf where a couple of other essential live

right in earshot of the cooky jar.