getting away is good.
it’s good to get out of the house and great to be surrounded by friends with the same interests. SPA was so social, with everyone was sitting in circles with their wheels in order to visit with one another. visit, that is, if you could hear anything above the (joyful) din—talk about knitters and spinners Representing—this was it, baby. i don’t know what the total attendence was, but it was a LOT.

it was a long trip but i read two great books—The Alchemist by paulo cuelo and When We Were Orphans by kazuo ishiguro. the alchemist is a must-read; it’s an entertaining, and meaningful fable that would refresh almost anyone’s sense of the possible and the ironic. ishiguro’s new book is beautifully written as always; he is a painterly writer to be sure. i think though, that like his last book, the structure of the story began to dissolve about two-thirds of the way through, causing him to lose the momentum he had been building, and making the story turn somewhat to mush. i’m still glad i read it just to listen to the language he uses.

there were a ton of little details to catch up on when i got back, but i feel very refreshed and energized, so it wasn’t long before i had most of that stuff cleared away—i even made an appointment to get my taxes done.
of course, not having much office work to do this morning helps a lot.

because that left me free to take pictures of stuff to show you.

so, what did i spin and knit this weekend, when i wasn’t driving?

mostly i spent the time at SPA spinning. i don’t get to do as much spinning at home as i’d like, so i went there intending to do plenty. (you should’ve seen how over-confident i was when i packed; it was bordering on ridiculous, but thankfully, monica understood. that’s why we’re friends . . .). i spun up two big, chubby bobbins of two-tone romney from a local ohio producer. 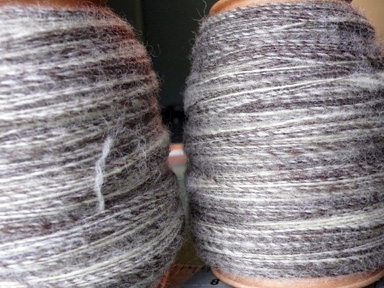 this is singles for sock yarn, so it’s thin, and it took me a while—all of friday evening and most of saturday. i’ll ply it up tonight and get it washed one day soon.

then i got out the sock yarn i spun a couple of weeks ago from some spunky eclectic BFL in the navajo colorway. i’m having to knit it in size 0 needles because the yarn is a litle thinner than i usually like. i only got a little bit done on sunday morning at the hotel, 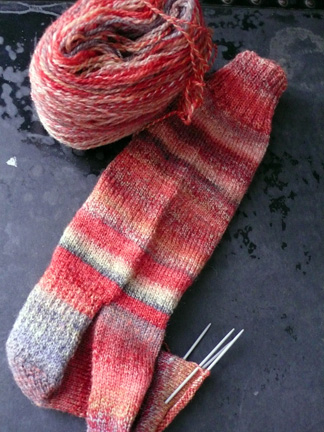 but i got a LOT done while visiting my mom for a couple of days on the way home. we had two evenings at home and a day at the doctor’s office with my brother. she was pretty interested int he fact that the yarn stripes itself. i’d give them to her, but it’s not an easy-care yarn, so she won’t be getting these!
she’s afraid to wear and wash the three pair i sent her for christmas because they’re wool. i demonstrated how completely carefree the new sock yarns are by washing my very own briar rose socks in with the pants and shirts i was laundering, right before her eyes, but i still don’t think she’s convinced.

i’m a little worried that i won’t have enough yarn for the pair. i don’t even dare weigh it at this point, but i’m hoping that elizabeth ends up with some leftovers from her half of the yarn that i can beg, borrow, or barter for. i KNOW—we already bartered for it, but desperate times require desperate measures, and i’m not proud (as you well know . .). she says she has tiny feet, so, maybe . . .

a few new things came while i was away. some books that i pre-ordered back in november arrived 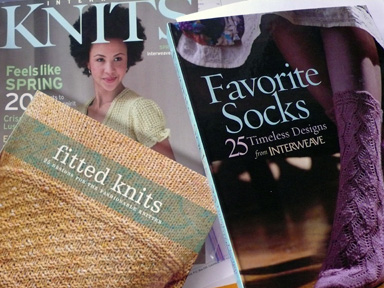 along with the spring interweave knits. i’m terribly excited to dive into fitted knits. my biggest problem with almost all published sweater patterns is that they are too big and too baggy for my frame. it’d be nice if some of these sweaters are ones that i would actually make.

the other thing that came while i was away is this 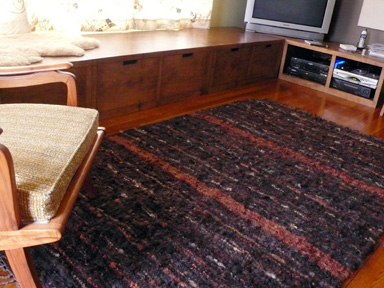 our new rug from donna foley at Four Directions Weaving. it’s woven with wool from her flock of brown, gray, and silver lincoln sheep, then some of it is dyed with natural extracts of cutch, madder, logwood, and walnut. donna tells me it was woven on a 60-inch counterbalance loom with a weighted beater (i knew some of you would want to know). 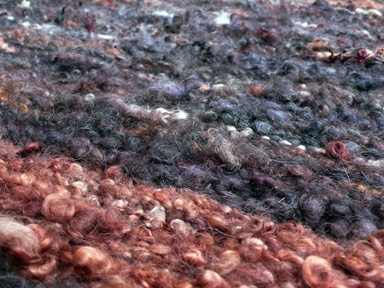 this is what it looks like up-close and personal 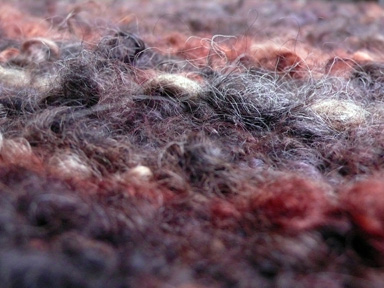 i’m looking forward to doing yoga on it. it’s much softer against the skin and much more cushion-y than what we have now.
how do i know?? . . . he-he, i’m sure you have an idea or two.

the first booth we hit upon entering the vendor area was Grafton Fibers, where i picked up two batts 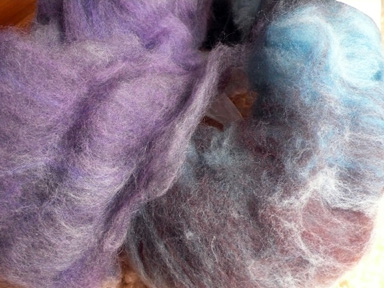 i haven’t spun their fiber yet, but if what i read all around the internet is true, then i’m in for a real treat.
then we circled halfway around the room before i was tempted again, this time at the spunky eclectic booth. i bought one hank of BFL roving and one of her merino/silk. 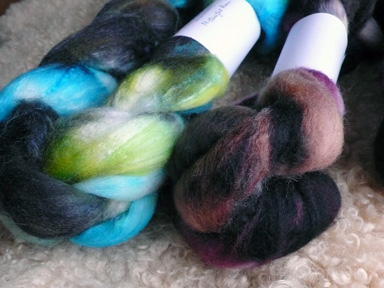 the dark one is the BFL and that will eventually be socks for david. i realized that i have been using a lot of natural colors for his socks, and that it would be a nice change of pace to make him something from dyed fiber.
so far, so good, right? i am halfway around the room and made only two purchases totaling 16 ounces.

then we went just one door down to the Indigo Moon booth, where my heart was stolen by this streaky apple green blend of her alpaca, silk and merino. 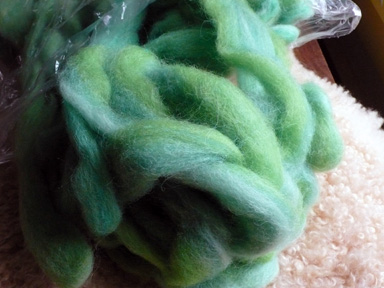 five ounce was all that was left of it, so i took the whole bag. OMG—it is soft. and i love the color—i am a fan of green, in almost all shades (except kelly green—eeuw!) i was thinking another hat for myself would be luscious in this. (i KNOW—i haven’t shown you the hats yet, but i’m saving them for tomorrow; with this much blog fodder, i may as well . . .).

i thought i was safe after this because we were almost all the way through, but then at the end, right near the door, we came back to judy’s and kim’s booth. it took all my might to avert my eyes from the yarn and not allow a purchase, so to soothe myself i picked up two tiny (just 2 ounces each) bags of kim’s angora/silk/merino roving. 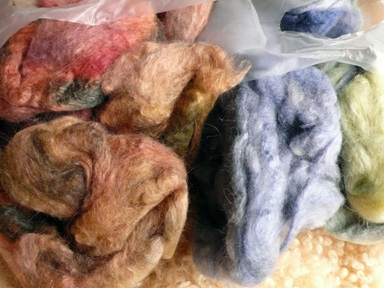 i had hoped to give some to debbie when i got home, since she couldn’t make the trip, but she told me she is allergic to angora . . . darn. i’ll have to think of something else.

satisfied that i had all i needed or wanted, i went back to the big room and spent the rest of the weekend spinning and knitting with the crowd. well, maybe we indulged in other entertainment too.

but by sunday morning that silk i’d seen at spunky’s booth was sort of nagging at me, so i went back to get some, along with a coordinating silk/merino roving 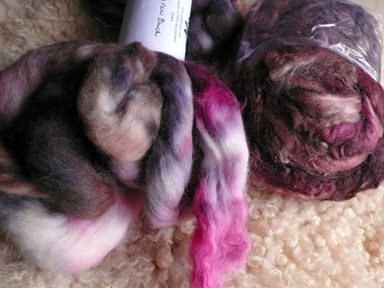 i thought it would be very pretty to spin up a singles of each and then ply them together so that the silk strand made a glimmering swirl around the wool. maybe it’ll even be enough for a shawl . . . .

and that ended the weekend and my shopping for a while. other than this weekend (which, admittedly is early in the year yet) i have been sticking to my resolution not to purchase yarn and finding it quite easy, actually. it’s the fiber that gets to me. i pledged to stay away form those purchases too, but fell off the wagon this weekend. the next event isn’t til may, and i am hoping that i won’t feel the urge to get anything there. we’ll see . . .

tomorrow i have more new knitting to show you, including some hats.

22 thoughts on “the roar of the crowd”