ok, before i give you my technology sob story of the week, you might want to go to interweave knits and take a look at the spring preview. scroll down to the bottom and there just might be something there you’ll enjoy . . . .
i’d give you a link but i can’t. you’ll have to read about that after you’ve been.

i think i mentioned last week that i got a new computer.
which we love.

the new OS though—leopard—well that’s a a different story. it is not playing nice with the computer OR with a lot of essential software. heh. like the printer driver. and mail.

ok, now i know i have had my own issues with the printer, but really, i do depend on it a lot and most of the time we get along fine. but leopard?? no way.
leopard is NOT going to get along with it. or with photoshop, acrobat, or even my document folders. sigh.

for instance, right now, i cannot copy and paste, which means that for this post i cannot make links (sorry dudes, i’ll try to put them in later if i can). that’s sort-of important, wouldn’t you say? i also can’t drag icons anywhere or open files a lot of the time.

poor david has spent an inordinate amount of time assessing, diagnosing, and tinkering with things to get it all up and running smoothly.
and i (not being worth a hoot in this department) helpfully stand there saying periodically, “can’t we just reinstall tiger?”

all that to say that i don’t have many photos for today; i managed to edit a few last night and load them to the server, but then today i can’t seem to export from photoshop (even though i could yesterday??).

i spent some time on sunday swatching for gale which is the stole spawn of the newest little nothing scarf, gust.

i had already decided that the motif for the stole should be enlarged from the one i used in the scarf, to improve the impact of the overall fabric.
then, i tried the yarn on several different needles sizes to get just the right amount of sheerness, which i would like to maintain, even with the yarn being a bit denser. 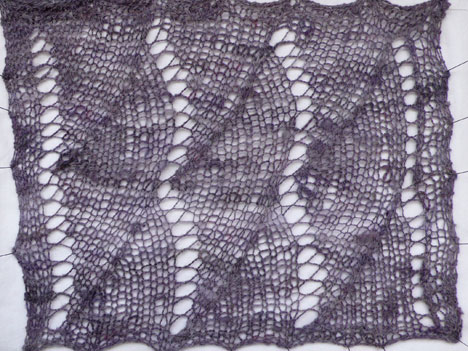 this is the first swatch of the enlarged motif on size 8 needles. the fabric is sheer and weightless, which i like, but the motif seems gigantic. so i tried the same motif on size 7 needles to see how much that would reduce the size, and what effect it would have on the density of the fabric 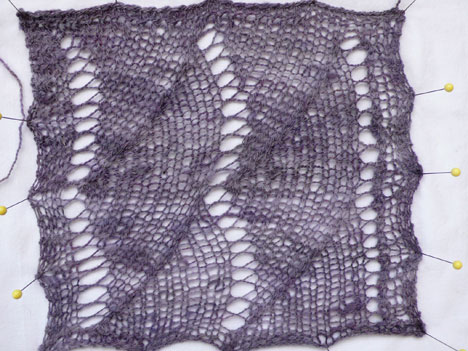 the size was more to my liking and the fabric, though more compact, is still sheer, though not as sheer. interestingly, the increased consistency of the tighter fabric is also suddenly jumping out as a factor in my decision, which i hadn’t expected.

the devil on one shoulder adores the wavering stitches in the looser fabric, while the angel on the other shoulder feels most smitten with the sharply defined curves in the tighter fabric.

(i don’t know what possessed me to think that i’d have two inner voices that agree.)

knowing that the looser swatch was not an option in that large of a motif, i did a third swatch with size 8 needles, this time reducing the motif size a bit.

i like this one very much . . the motif is not too huge, the fabric is very sheer, and the combination results in an overall delicacy that calls to me.
it will require rewriting the instructions which michelle is already testing for me, but that’s ok; michelle can keep going on hers.

i have to say though, that the definition of the tighter swatch keeps catching my eye. here you can see the size 7 and the new size 8 one side by side. 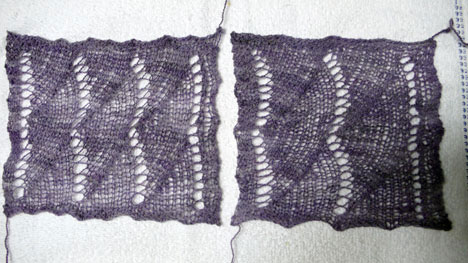 which one will it be?
i decided to throw it on the table in class last evening to see what the concensus might be.
HAHAHA! consensus. WHAT was i thinking??

actually, while last night i was very undecided, as i look at the swatches again for the first time today, along with the photos, i know my answer.

thank you for all the lovely compliments on my new sweater. for those that asked, i swear, i am working toward patterns for the sweaters.

it’s a funny thing . . . i was telling katinka today in email that when i first started thinking about “coming out” as a designer, it was mostly my arsenal of sweater patterns that i planned on marketing, with a little dabble here and there in lace designs. then i fell into the lace deisgn niche so quickly, and the demand has been so overwhelmingly positive, that lace design has come to dominate my workload. for now, at least.

but sweaters are the backbone of the functional knitting i do for myself and our families; it is a rare year that goes by without several sweaters getting completed. and it’s been that way since i was in college.

so really, really i am trying to balance everything, get a system down, and get the ball rolling on that. thanks for being patient and encouraging my sweater design in all ways.

since the tangled ropes crew is done now, i decided to pull another sweateer out that has been patiently awaiting my attention for too long. this is a lighter-weight sweater that will be great in spring and fall. 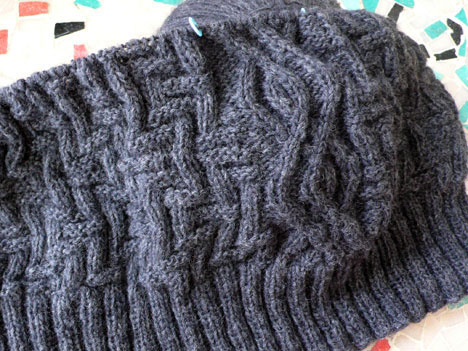 once i pulled it out i could immediately see why this keeps getting put on the back burner, and i don’t know why this didn’t occur to me earlier.
it’s too dark and fuzzy.
normally i work on my personal knitting very late at night, in the TV room. and i just plain can’t see what i’m doing on this piece in there. every row takes forever.

so i’m going to try shifting things around a bit in my workload to see if i can manage some daytime hours for the sweater, while keeping the snow shawl a priority.
because i really like the way the sweater is turning out. it has this crazy-interesting texture stitch and cables, both of which i like a lot.

i did finish my lady cardigan socks, and am thrilled to have them done.

i have one last sock that’s been in limbo for a while, and then i can start a new pair.
in fact, i can start looking at stitch pattern now i think . . . .

46 thoughts on “the spotted cat can take a flying leap”