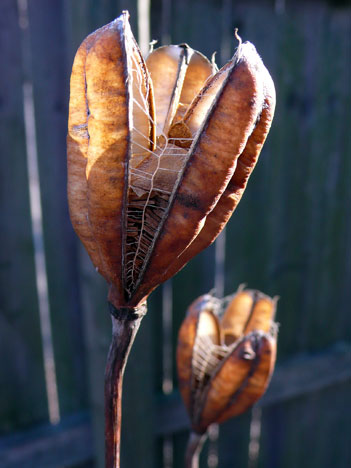 these pods are left from the last lilies of last summer. only one type of our lilies had them, and i’ve enjoyed these dried “flowers” which have remained in the back garden bed during the winter. first they were shut tight, then they opened up and stretched their cobweb “hinges” just to show us they had a trick or two left in them. the shells are hard, but translucent, and allow the light to shine through to the center cavern where the seeds are nesting. maybe in spring the seeds will drop into the ground and grow up to be lilies some day too.

i’ve had photos of them for a while but was waiting for the right knit to pair them with. 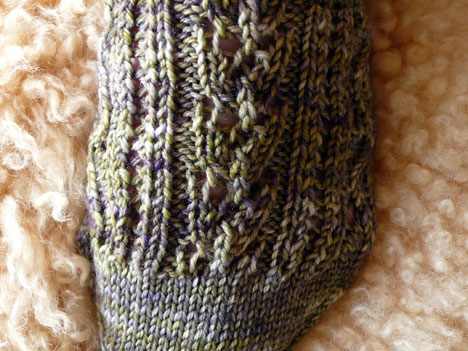 and i think we have one here. i finished up the first baby violet sock last night. 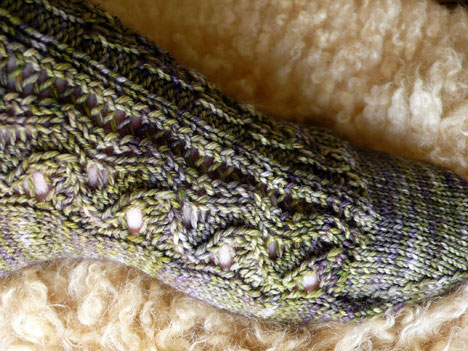 hehe. it’s always so hard for me to get good photos of the sock on my own leg, and um, since it’s valentine’s day, i thought it would be a bit unappreciative if i woke david up to do it. but i managed to get a few i like. 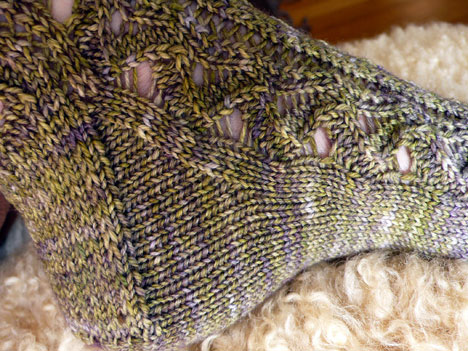 i made one adjustment in the gusset which i will knit into the second sock—that’s it.
here’s a photo of the leg, so you can see the cuff and all. 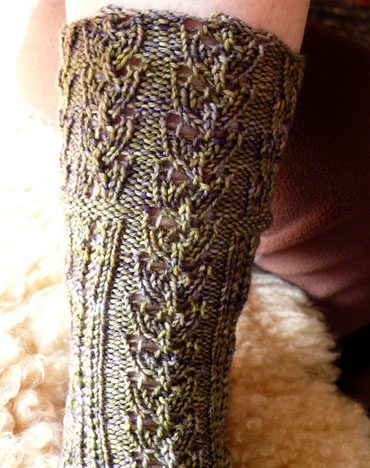 and then i started the pavé sock. and started it again. and again (most of those machinations went on during the time i was teaching . . i got absolutely nothing done during class except starting over. and over! oh well . . . some days are like that.). 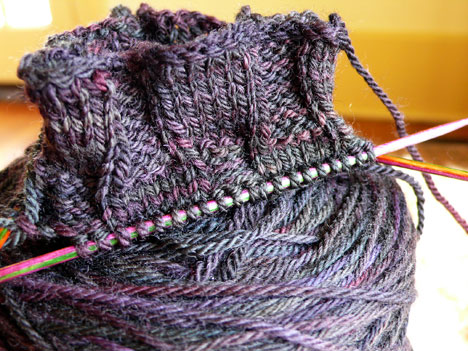 love the yarn. LOVE the colorway.
the problem was that i started the sock and merrily knit for about 3 inches in the exact same motif i used for the paris-roubaix mitts and hat. in my head i knew the motif would be smaller in sock yarn on size 1 needles. but my inner visualization module must have missed a cylinder when it placed that picture in my head because what came off the needles did not at all match what was playing on my imaginary movie screen.

i mean, it was fine. just . . . tiny.
but maybe tiny is good—mosaics are tiny; i like mosaics.
so we’re going to knit a little of both and see—maybe this sock is really two socks.

and then there is the ubiquitous snow shawl. 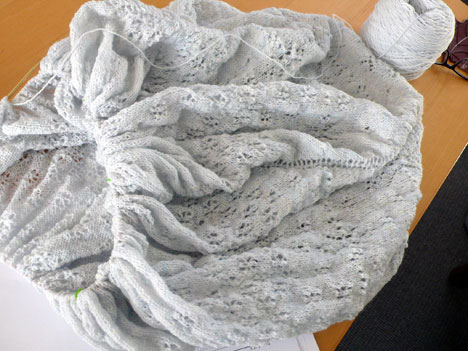 i’m really getting there. i’m beginning to see a glimmer that might be the light at the end of the tunnel. i don’t dare think that too loud—there is still the rest of the tree border, the snow drifts and the edging to do. speaking of the tree border, here is a glimpse of the first row of trees which has emerged from the needles 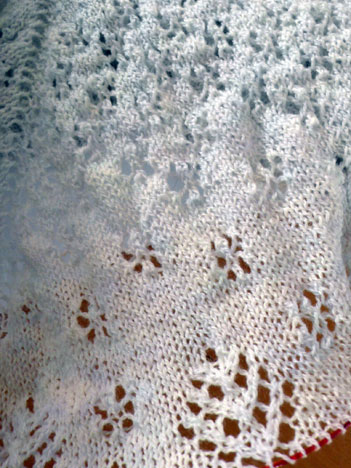 i am hoping against hope to finish it before i leave for SPA next thursday, but i can’t predict whether i’ll make it. we could take bets, but uh, let’s not . . . i don’t need to monitor a gambling ring in addition to all this knitting i need to get done.

i might end up taking it with me to work on at my mom’s after SPA. i always get so much knitting done there, so i’m very much looking forward to it.

if that’s the case—and i’ll know by saturday if it is—then i may just decide to finish up gale and block that before i go so the pattern can be released, then work on the last of the snow shawl on my trip. and more socks of course.

but really all of that is just speculation right now. and why speculate when i could be knitting—huh, huh??

35 thoughts on “old and new alike”