i’ve continued to mess around with smaller knit objects over the last few days with mixed success. while i loved the spiraluscious mitt as i first planned it, i had this idea for a variation that also seemed worthy of a tryout. i thought that the flared cuff might not appeal to some and it occurred to me that if i switched the two edgings, that might solve the problem. 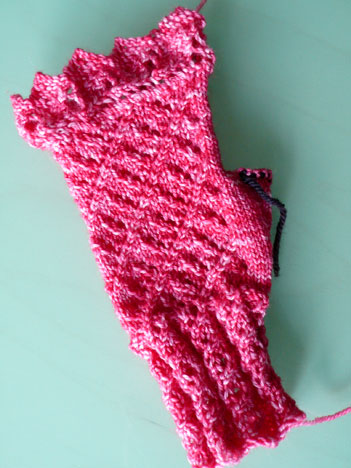 it’s so bad i just had to blog it. the top edge might smooth our after a good soak, but i’m surprised that putting the waterfall rib at the cuff is so UNappealing. it’s amazing how the same elements can add up to a completely different result just by shifting them around.

it took time to do it, but it’s not necessarily time wasted . . . it’s good to try things out, and some ideas just don’t come to life if you don’t knit them up. and then, i got my hands back into some of michelle’s smooshy sweet socks yarn for a little bit, reminding me that i promised my littlest niece a pair of socks just like david’s (she’s his new girlfriend) and i think she’d luuuv that colorway.

plus, that experiment makes the original version look so much better. 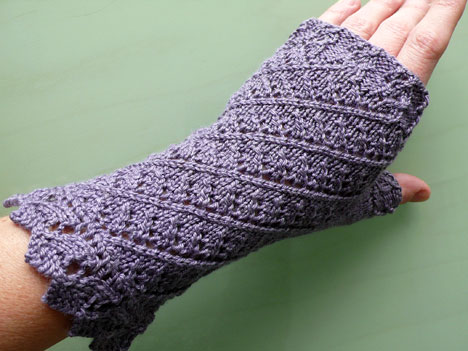 and actually, once it was blocked, the cuff is plenty snug at the base of the hand to provide that necessary shield against the cold; it only flares out a little down near the edging to provide a pretty balance.

once i had that resolved i wrote up the pattern and sent it to our friend kyrie to test knit, so it shouldn’t be long before it’s ready for release. 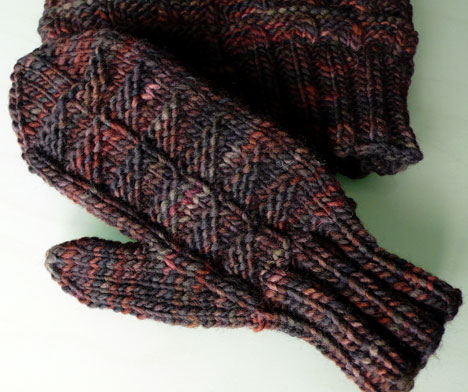 this will make a cute set i think (and i’m knitting an extra hat for me). i love this photo because i was finally able to capture the deep beauty of the pilgrim yarn. i guess the light in that spot is just right for it.

i still feel pretty distracted by small project knits and certain people are tempting me to do more. i am not by any means immune to the charms of the dyers, those wily vixens. deb and i were tossing around the idea of another neckwarmer, this time in a softer, denser yarn, so she’s sent me some alpaca/wool and some of her worsted weight merino as an imagination aid (sooo tricky, that one).

i received another little something in the mail from jody, who wanted to show off the work of a friend—and rightly so—just look at this pretty circular needle case 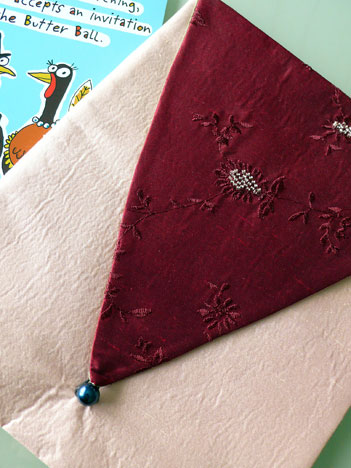 it’s made from vintage kimono silk with hand beading; the workmanship is exquisite. the maker does not have an etsy store (yet) but we’re hoping she’ll consider getting one to market these pretty cases.

other than that, nothing much is new . . . i’ve spent too much time at the computer the last couple of days, including several hours today trying to figure out why my hard drive was full (and why, therefore, i could not save the files i was working on). it turns out that iTunes was making and storing copies of my very large audiobook files—enough to completely fill the thing up.

now i’ve got things back to normal and we’re running a lean, mean, fiber machine.

so with that, i’m leaving again to try to get some serious knitting done this evening. i’ll make a big effort to be back tomorrow to catch up (because you know what sunday is, don’t you?)