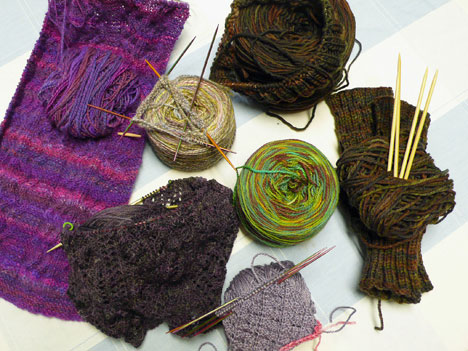 oh, the heartbreak of startitis (and the glee . . .)
this is purposeful startitis though; now i have plenty of small projects underway to bring on my trip this week. having them on the needles and a few rows in makes them so much easier to tote along. it will still take time to get all the patterns written up but i’ve been working on that too.

we are leaving for albany a day earlier than we originally planned because the weather for tuesday is looking better than the weather for wednesday. which means that now i have to pack and get organized this evening—probably good, since i’d almost surely cast on yet another project, given the time.

i honestly don’t know how many of these will get completed over the long weekend, but i’m hoping at least half of them will. i have several mitts there and a hat, which should require only a couple of hours each to finish off. my cabled scarf is a slow-moving project even when i devote whole evenings to it, but that’s ok; the comfort of holding it and the fun of working the cable outweigh the lack of speed.

i have one new sock which i’ll tell more about when i have a little bit more completed; another sock is all set for casting on, so i’ll probably just grab some yarn to take along for that in case i need it (you never know).

the newest thing i have underway is a mitt/hat/scarf set in the briar rose fourth of july yarn i showed a picture of the other day. 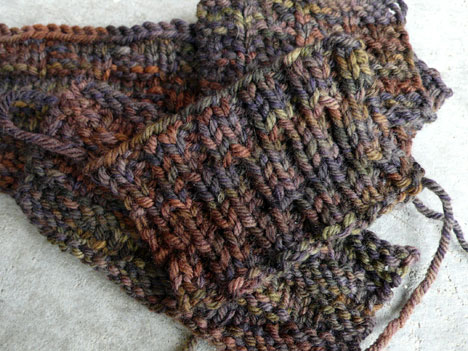 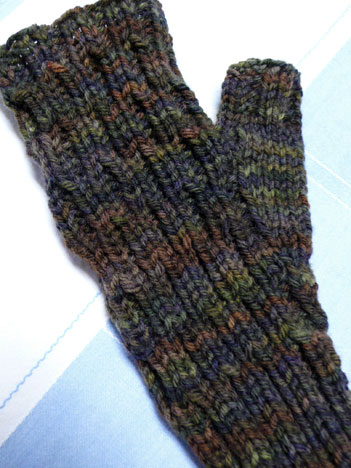 (excuse the horrid lighting—it’s been as dark as evening here all day and we had to add electric lights or the photos.)

almost homely, it is. but the when our lovely hand model anne marie donned the glove in class this morning it was transformed. we all ooohed and aaahhed as it opened up 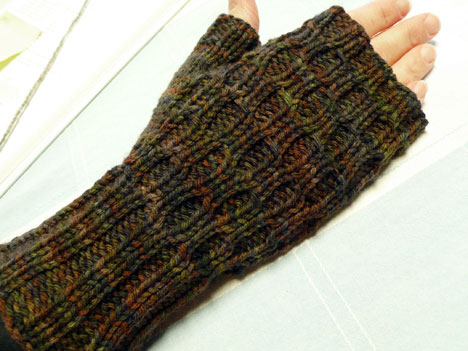 what i like about it, besides that nice deep texture, is that the fabric is dense with a firm hand, which should keep it from losing its shape or letting the wind through. the little windows formed by the fabric will trap heat against the skin for a snuggly-warm feeling. 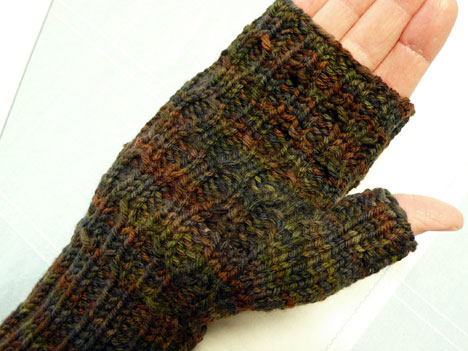 it’s a nice, neat look that anyone could wear, in a yarn weight that’s warm, but not too warm.

we had a nice moment in class this morning when susan finished her first sweater (actually, it needs a crochet edge, but all the knitting and seaming are done) 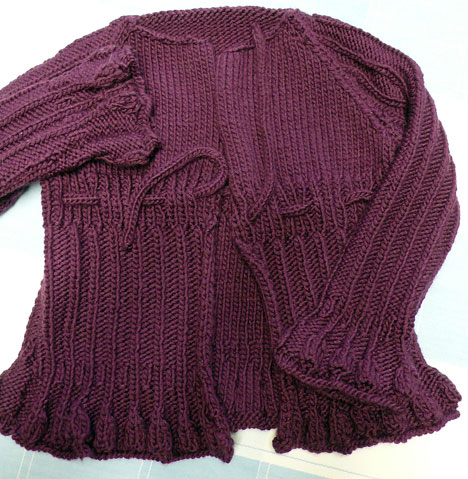 it’s a gift for her granddaughter, but susan says it gives her a big feeling of accomplishment, so it sounds as if she got a nice surprise from it too. isn’t it cute? it’s from the berocco comfort collection. she did a beautiful job, didn’t she? this is her first project with shaping and with seams and sizing, so there was a lot to keep track of.

well, the day is just zipping by (actually the whole month is, no?), and it looks like i have another class arriving in a few minutes so i’m signing off for now. next time we meet i’ll be in the capital district.